My second outing with MAHG was to the Susquehanna State Park in northern Maryland. I haven't been to this park before (at least, not that I recall), and while it was still a long drive to the park, it was closer to home than last week’s excursion into Pennsylvania .

The day started off cool and windy, and starting off wearing both a fleece and my rain jacket, reminded me a little bit of the Smokies. (Fortunately, though, there was no snow and it was not freezing.)

While waiting for everyone else to arrive, I met another hiker named John, who had finished a 16-year-long section hike of the Appalachian Trail last year

Led by Joe, 15 of us started off the hike with a climb up from the parking area to the Susquehanna Ridge trail, following it almost to the eastern edge of the park. The wind continued howling, but fortunately, the trees blocked much of the wind, reducing the tree-waving roar to almost still air at ground level.

Over the course of the day, John and I reminisced about our time on the AT, and I wound up discussing the Trail (and also equipment suggestions) with a few other hikers as well.

After following portions of three different trails (Land of Promise, Rock Run, and Ivy Branch), and crossing over a slightly tricky stream crossing, the wind picked up again as we came out of the trees and hiked along the edge of a field, being tossed about a bit by the wind as we eventually turned onto the Farm Road trail.

About ready for a break, we took a short jaunt on a side trail to reenter the woods, protecting us from the wind, and we stopped for a short break at a dilapidated barn. A green “WARNING: NO TRESPASSING: Not open for public use” sign warned against entry. Even without the sign, though, the barn was clearly in poor shape, and no rational person would have ventured very far inside. Boards were missing from the outside, there were holes in the roof, wooden boards and planks lay strewn haphazardly on the floor, and a giant gaping hole in the middle of the barn's floor into the ground below all served to discourage entry.

Back hiking along and through a field, we turned off onto the Deer Creek trail, which re-entered the woods. A short side trail led us to a very large White Oak tree. (As we were heading to the tree, someone quipped, “While we're out here, we might as well see the big old historic thing.”) Later, when the trail passed by a similarly large birch tree, several of us had double-takes, and one person actually wondered out loud if we had gone in circles. (We hadn’t, but it sure seemed that way for a second.) 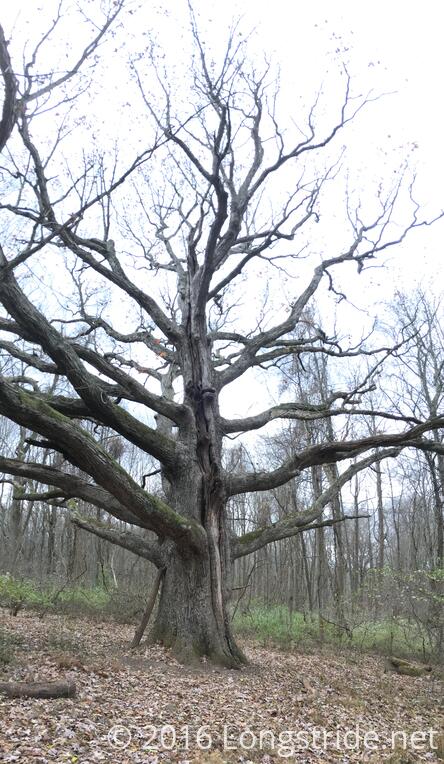 As we wound our way along the ridge, we passed through an area where the trail was covered in leaves - almost knee-high in some places. This slowed the progress of most of the group; I managed to keep the majority of my speed (slowed only by the physical resistance of walking through a leaf pile) by using my trekking poles as probes, making sure I wouldn't unexpectedly fall due to surprises hidden beneath the sea of leaves. 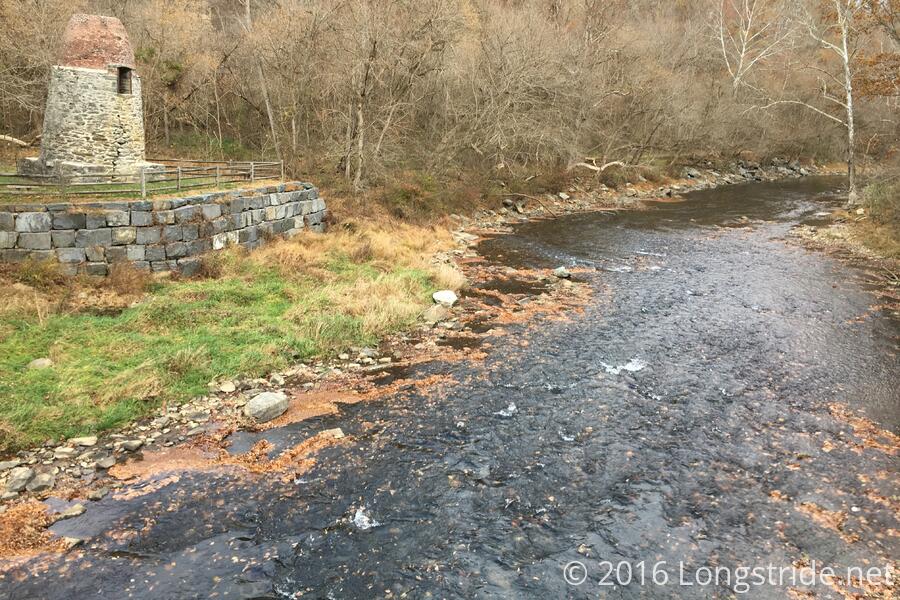 When the group stopped to take a vote on whether to take a route with "rolling hills" along the ridgeline, vs. a trek down to the river and then flat back to the parking area, a tree branch blew off a tree and narrowly missed hitting several of us. The vote quickly became hike through-falling-branches vs. hike down-by-the-river, which passed in favor of the river walk almost unanimously.

This was, I think, the closest I've ever come to being hit by a falling branch, even closer than the time on the Trail when a branch fell between me and another hiker.

As we returned to the parking area, we caught sight of a bald eagle, circling over the river, a great capstone to a nice hike through the woods. This was especially appropriate; the gps track for the hike looks vaguely like an eagle in flight. 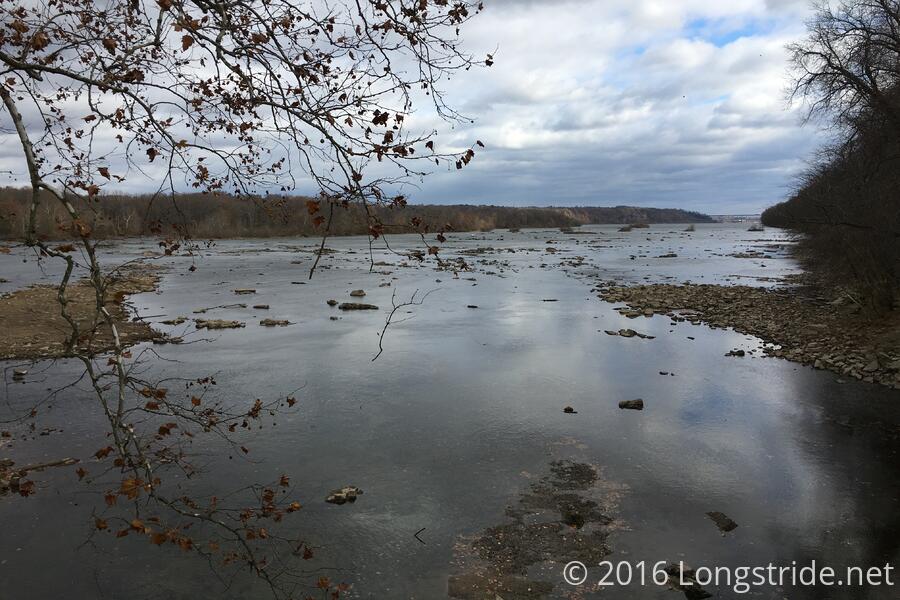