One of the great things about living near Washington, DC is the proximity the large number of museums and monuments in the nation’s capital. It’s something that’s easy to take for granted. DC locals often bemoan how crowded The Mall can be when it’s “overrun” with tourists, while forgetting to actually visit the monuments themselves. So, today’s hike is a bit different: a tour of several DC monuments, lit by the light of the moon.

Roughly 35 people met up to tour the DC monuments on a cold, windy night, led by two MAHG hike leaders. Hoping to get some different photos of the monuments, I opted to go with the slower of the two groups, which provided a bit more time for that. And while the hope was for a moonlit evening, clouds over the area hid the moon from view most of the night. 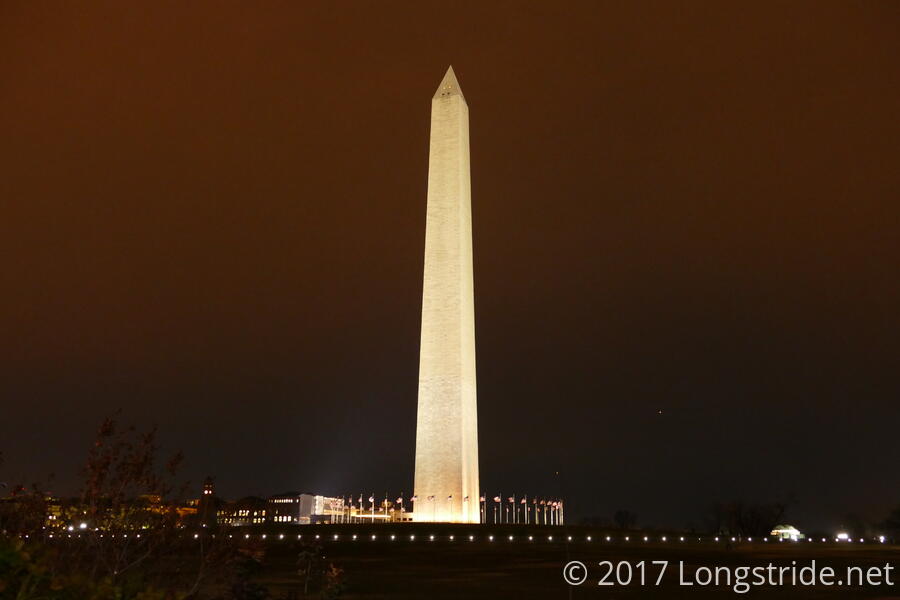 Next up on our tour was the Jefferson Memorial, located just across the Tidal Basin. It was here that the benefit of this after-dark excursion first became apparent. With no crowds, the monuments take on an almost eerie feeling, their splendor made clear, and yet, a feeling of emptiness pervades. 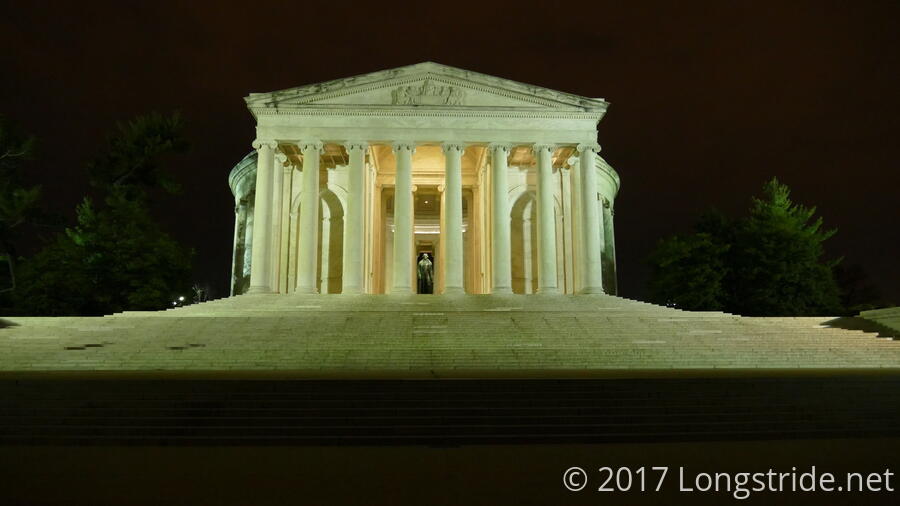 Continuing counter-clockwise along the tidal basin, we find the Franklin Delano Roosevelt Memorial. First opened in 1997, it’s a relatively large and entirely outdoor memorial to America’s longest-serving president. The memorial, split into sections according to each of his four terms in office, features prominent waterfalls, which had not yet been turned on due to the season.

The last stop along the tidal basin was the memorial to Martin Luther King Jr., another recent addition, completed in 2011. 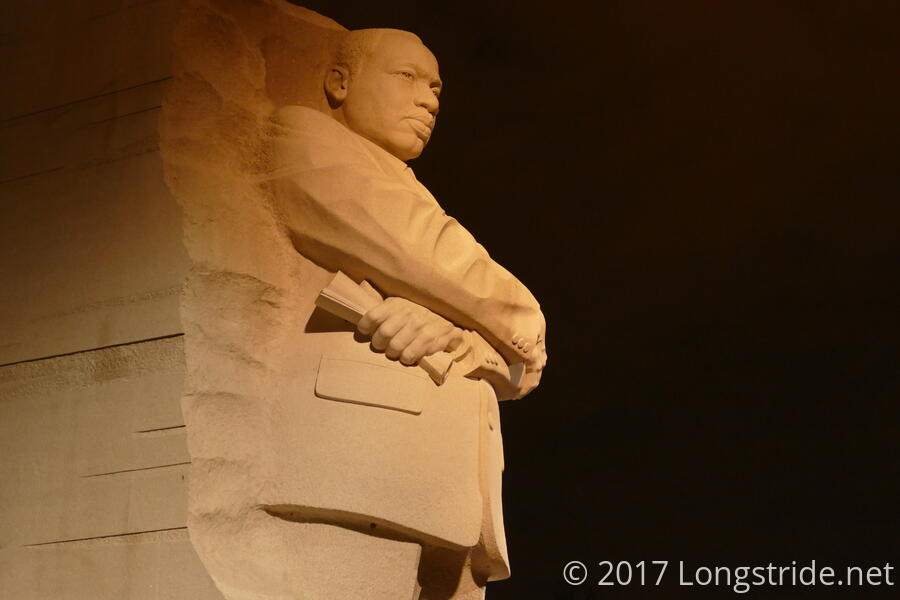 Just across the street was the DC War Memorial, a somewhat subdued monument to DC citizens who served in World War I. While there, the moon briefly peeked out from behind the clouds, its color tinted slightly due to a penumbral lunar eclipse.

From there, we headed west, passing by the Korean War Veterans Memorial. The memorial, which features 19 statues of soldiers on patrol. The statues, a bit larger than life-size, look even more looming and imposing in the dark than they do during the day.

Next up was the Lincoln Memorial. Here again, the time of day greatly changed the character of the memorial. As with the Jefferson Memorial, Lincoln is normally overflowing with people. Now, only a few were around, making Lincoln both accessible, and lonely. 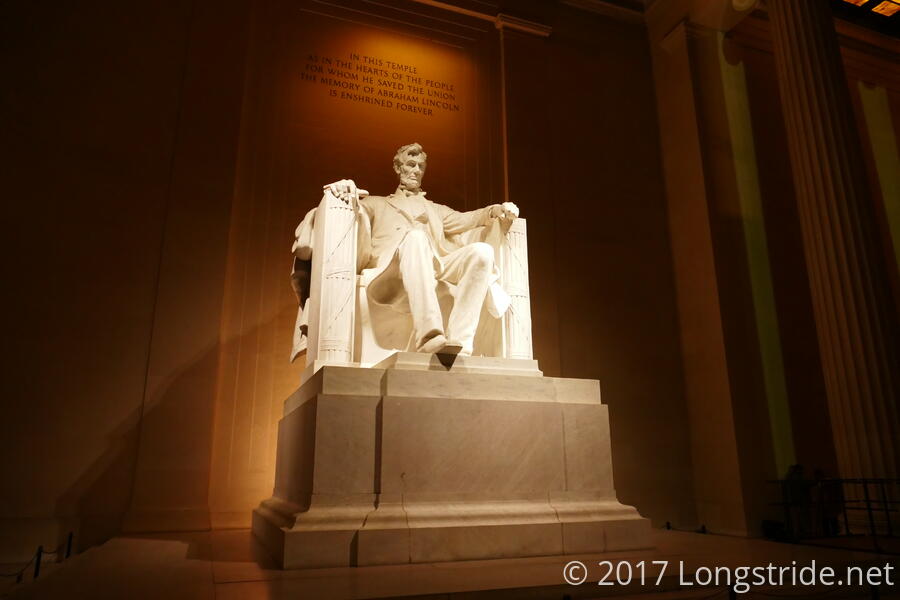 Heading north, we stopped at a memorial I didn’t know existed. Located just outside the National Academies of Science, Engineering, and Medicine, is the Albert Einstein Memorial. The memorial features an oversized bronze Einstein, casually sitting in his sandals on a three-level circular marble bench. Einstein’s nose is polished; apparently, children like to climb the statue and rub his nose.

Moving on from Einstein, we traveled through the Vietnam Veterans Memorial, passing by The Three Soldiers sculpture. Another bronze sculpture, this one has a noticeable green coloring on the uniforms and darker color on the boots the soldiers are wearing, making for a rather striking and unique appearance given the monochromatic style that is so much the norm for statues. 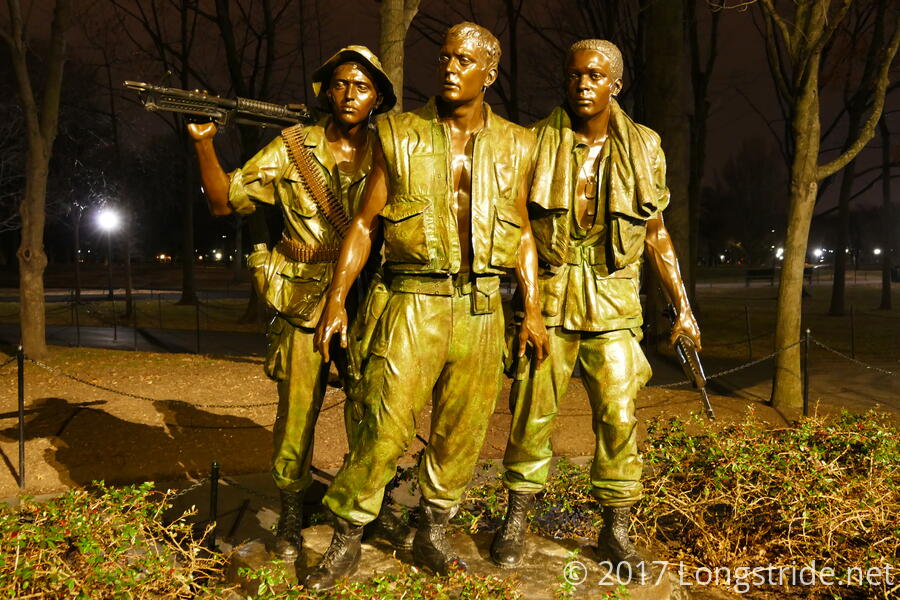 Beyond lay the Constitution Gardens, featuring a lake with roosting geese, and an island featuring a dedication to the signers of the Declaration of Independence. Adjacent was the last stop of the evening, the National World War II Memorial, which opened in 2004.

Tonight’s hike was almost a spur-of-the-moment decision for me, but I’m glad I decided to go. MAHG runs this particular hike every weekend there is a full moon. And whether or not I return to the monuments at night with MAHG, there’s definitely one thing I’ll bring with me I didn’t have tonight: a tripod.