Today’s hike with MAHG ventured to Southern Maryland, near the Chesapeake Bay, for a trip through the north side of the American Chestnut Land Trust. The land trust, founded in 1986 to preserve forest and wetlands in Calvert County, MD, is named after the tree that used to dominate forests in the eastern US. The park covers the area surrounding Parkers Creek, a tributary to the Chesapeake Bay which splits the park into its North and South Sides.

After a short descent, the trail quickly leads to a large, murky pond, the result of flooding caused by a beaver dam. A bridge, across the stream flowing from the stream trickling through the dam, has a sign indicating the bridge had recently been moved to accommodate the beavers, and asks hikers to please remove any branches the beavers may have laid down attached to the bridge. 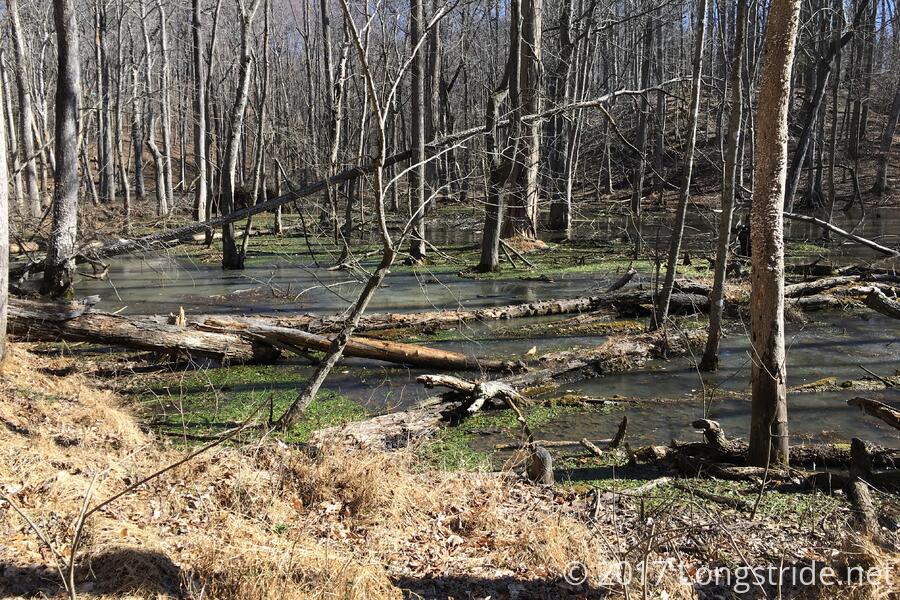 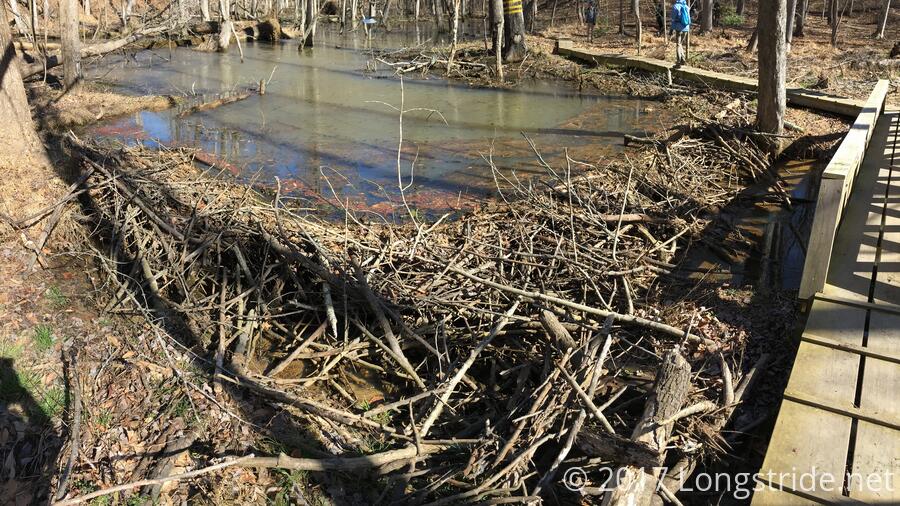 After passing the dam and climbing back up out of the stream valley, the trail continued southward, towards Parkers Creek. Near the creek, the trail split into two forks. The eastern fork, the Bay Overlook Trail, leads to an overlook of the Chesapeake Bay, into which Parkers Creek flows. Many trees block the view, though, and once leaves grow in, the Bay would be barely visible from this location.

After a short break, we returned and took the other fork, the Creek Overlook Trail, which provides a view of Parkers Creek and the stream that flows from the beaver dam. After everyone partook of the view, we retraced our steps, and hiked back to Double Oak Farm.

From the farm, we followed a counter-clockwise loop around the eastern part of the park, forming the Parkers Creek Loop. Starting off on the Double Oak Lane trail, which followed the gravel road to the parking area, we headed west, before turning south-southwest as the trail continued on the Parkers Creek Road Trail.

After a few short ups and downs, the trail dropped down to the level of Parkers Creek, and began an eastward turn. There, a short side trail, the Bridge Spur, led to a boardwalk along the creek to “The Raft”, a recently-installed floating bridge across the creek. By pulling the raft across the creek with overhead wires attached to the raft and trees on both banks, three people at a time can cross the creek to the South Side of the land trust, where another boardwalk begins the North-South Trail leading to the core of the South Side. 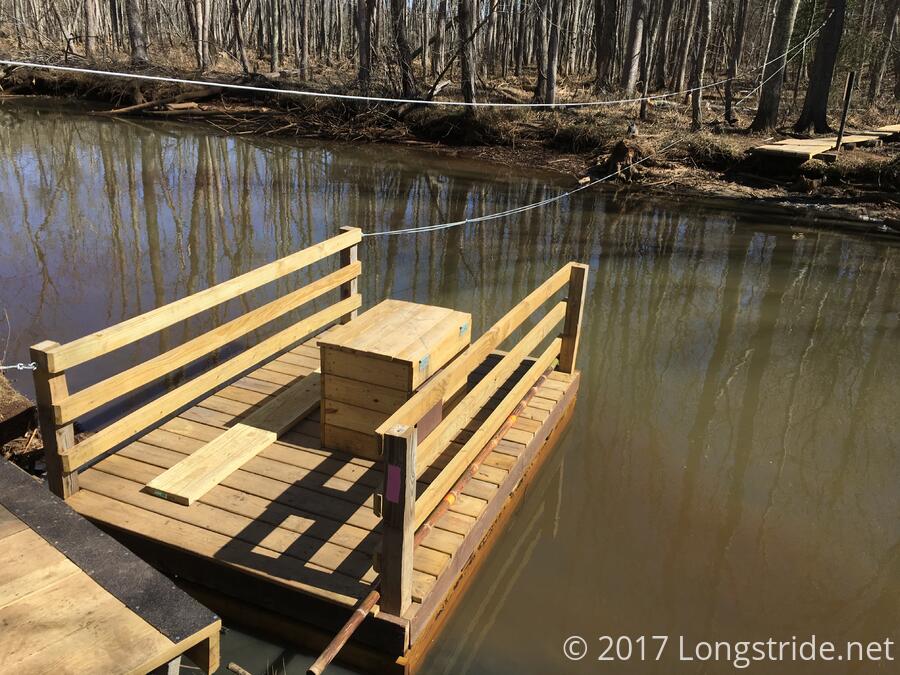 A few of us pulled ourselves across just to try it out. With two people pulling, it wasn’t that difficult a chore.

Returning to the hike, we returned to where we left off, turning onto the Parkers Creek Trail, which led roughly east, along the creek. At times, the trail came close to the creek. Due to winds, the creek was at a exceptionally low level, and it was possible to walk out onto the (extremely muddy) bank for a nice view at creek-level.

Turning north, the trail became the Turkey Trail, and climbed back up the hill to the parking area. (A spur trail, which we did not follow, visits the creekside again.)

Like yesterday’s hike at Oregon Ridge this was an easy hike — about 1500 ft of elevation gain over 7.5 miles — but with great weather and different scenery, it made for an enjoyable time.