Papa Monkey, Pigeon Toe, and I, along with some other hikers who were getting shuttles to ME 17 but not slackpacking, headed off to the trail shortly after 7. On the drive there, we saw a moose in a clearing with a small lake to the side of the road.

Today’s hike, to ME 4 near Rangeley, was relatively gentle. While the trail was occasionally rocky and rooty, the elevation profile was pretty nice. 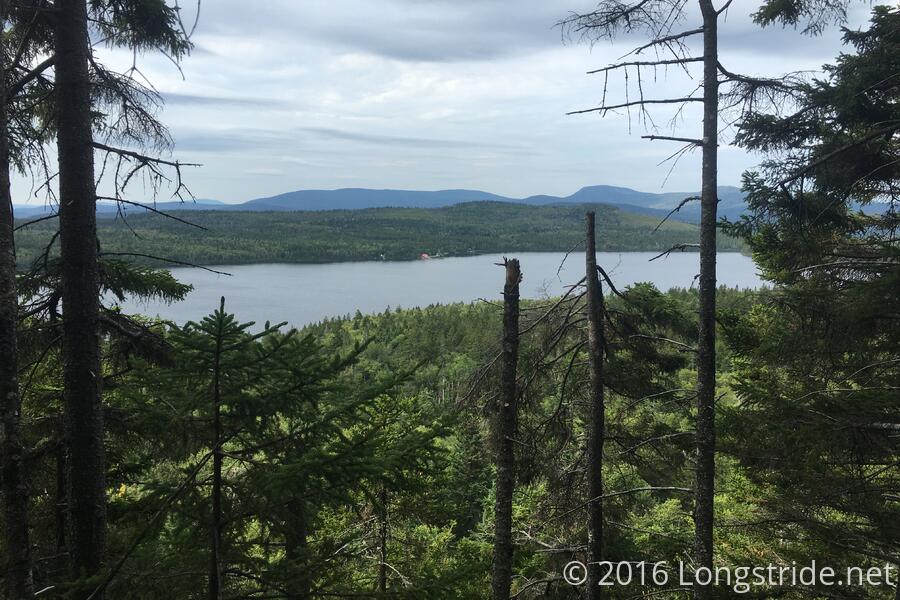 I took my first break about 5.3 miles in, at a clearing for power lines, having maintained a pace faster than 2 mph; I was quite pleased with that.

My next break was about six miles later, about a mile and a half away from the road. I had planned for my break to be about a mile earlier, at a beach at a pond, but a discrepancy between my guidebook and how far my GPS said I had hiked caused me to overshoot that location. I called Farmhouse and arranged a pickup at ME 4.

In retrospect, it was fairly obvious where I should have stopped, because I could see the pond from the trail, but assuming my GPS was accurate, I wasn’t there yet according to the guidebook. The guidebook claimed today’s segment was 13.2 miles, but my GPS claims I only went 12.6, so the mileage managed to be counted inaccurately somewhere between the power lines and that pond.

I made it to ME 4 around 2:30, sooner than I expected, on account of my faster-than-recently pace for the day, and my unexpected closeness to the road. My shuttle showed up eventually, and off I went to the hostel.

Papa Monkey, preferring to save money, instead stayed at a primitive camping hostel closer to the trail. Given his indicated plan for a faster hike to Katahdin than I intended on doing, I expected this would be the last I’d see of him.

Farmhouse Inn is a repurposed duplex. One side has “main entrance” to the front desk, the pack room, laundry, some private rooms, and the owners’ living space. The other side (where I was staying) has the bunk room, a kitchen, and more private space. Because it’s a duplex, there’s no internal access between the two sides; the intended access is via the exterior doors.

Sometime in the last few days, I heard someone give a negative review of Farmhouse, mostly in that it was “under construction”. The source of the complaint was pretty evident upon arrival: along the back of the building, a trench had been dug around the back of the building to facilitate extending the patio and screening it in. The project appeared to have a rather significant DIY vibe: it looked entirely unsafe. There was construction equipment and materials lying on the grass somewhat in the way. The trench was not blocked off at all, and access to the side of the building with the pack room, laundry, and main entrance was across a flimsy pair of boards that crossed the trench. Upon seeing this, I immediately understood the complaint against the place, and my first thought was, “someone’s going to fall in that hole”.

That said, the inside was nice, and the owner friendly. Although I already knew the cost of the shuttle to the next road crossing, I inquired about slackpacking options anyway, hoping that maybe there’d be enough interest from other people that it’d be worthwhile. It turned out that some other people thought that maybe they’d be interested, but it was unclear how many people were actually serious about it. I registered my interest, and then went and got a shower.

Farmhouse normally has a 6 pm shuttle to town, but that wound up being canceled due to a birthday party for the owner’s adopted 13 year-old daughter, to which all hikers present were invited. (Free pizza, sodas, and cake! Who can turn that down?) This made resupply somewhat tricky, but fortunately, all the pieces fell into place.

Two other people had committed to slackpacking tomorrow, so that brought the shuttle’s fee down to merely “kinda expensive”, which I was willing to pay since I wasn’t quite yet ready to give up slackpacking. A work-for-stay with his own car offered to drive several of us to the food store “now” (which meant my resupply wound up being limited to just a bunch of snickers bars, since I figured I’d be able to do a more substantial resupply tomorrow, and also, I hadn’t actually counted my food, so I didn’t know what else I needed to buy). And there was a gas station nearby that sold breakfast sandwiches, and we could stop there on the way to the trail tomorrow morning.

The birthday party featured a rather unexpected emotional whiplash. The birthday girl blew out the candles (”Yay, I’m 13!”), licked icing off the bottom of the candles, and wound up on the verge of tears with a lightly burned tongue.