With an atypically steep ascent and descent today, I’ve moved within spitting distance of the namesake of this alternate on the CDT: the Gila River.

It was unexpectedly cold this morning. So cold that I actually put on the legs of my convertible pants. Which I should have put on half an hour earlier, rather than sitting cold in my sleeping bag.

Our plan had been to start hiking at 6 am. I didn’t think it was much likely that I’d actually meet that target, but Pale Ale and Sprouts are (by their own admission) slow in the morning, so I figured it’d work like it did with me and Quoi on the PCT: I’d roll out of camp much later than expected, and catch up with them at some point in the morning.

I chatted with Shane just after Pale Ale and Sprouts left. It turned out that he only had a 50°F sleeping bag, so he was very cold last night. He took this as a sign that he should probably hike back to Silver City and go home, or try a different trail. I tried to offer him some encouragement. And though I didn’t actually say it, I was proud of him that he came to the realization that he was unprepared for the CDT and bailed out before Search and Rescue got involved.

I finally left camp at 7:30. Though the sun had risen over an hour earlier, it was still cold out, partially because I was in a small canyon, and the sun itself was not shining directly inside it yet.

Shortly after leaving camp, there were a series of five water crossings in relatively quick succession. All of them were small enough to rock hop, and I kept my shoes dry. That there was even water here was a significant departure from the trail to the south. If you overlooked the occasional cactus, you wouldn’t think there were desert-like conditions just an hour’s hike away. 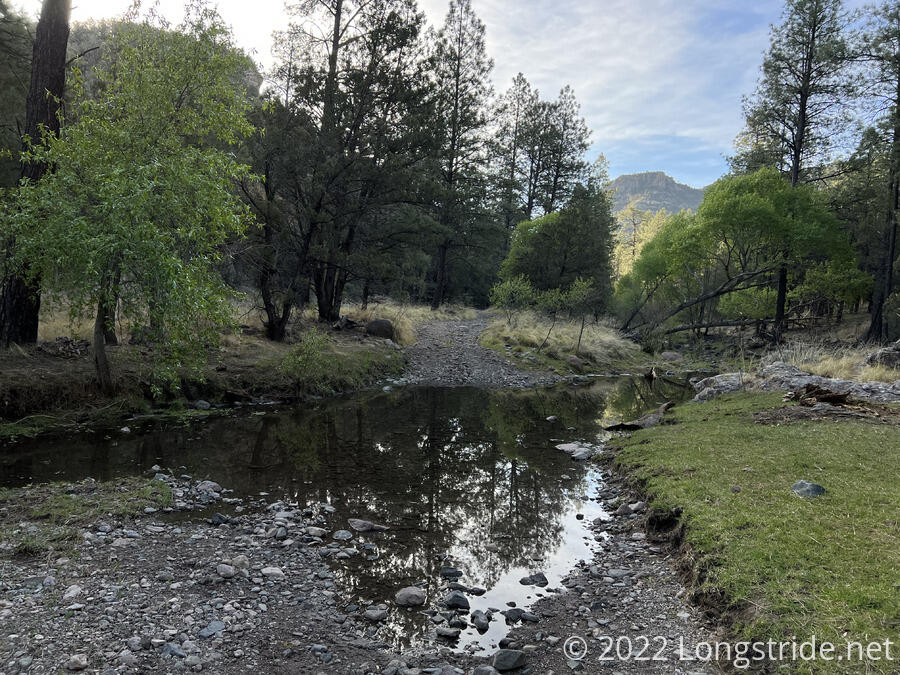 First Water Crossing — The first water crossing of the CDT (though not actually on the CDT proper).

Though the day started with lots of tree cover, the trail quickly climbed up above the tree line, which gave some nice views to rock pillars and distant mountains. I caught up with and passed Sprouts.

Above the forest, the trail crossed a rocky ridge, and paused at “The Regis-tree”, a tree stump with a trail register inside. Beside the tree and its sign, “CDT” was written out with sticks.

Pale Ale had already made it to the Regis-tree, and indicated that she and Car Bomb were going to see Doug the Hermit. As befitting his name, Doug is a hermit who has lived not far from the tree for over twenty years. He is known for being chatty.

Being a bit unclear where exactly the trail to Doug’s place was (and how far away it was), I attempted to follow the arrow Pale Ale wrote in her log entry. However, I did not go far enough to the right, and I almost immediately wound up back on the trail. Knowing there was a long climb coming up, and lacking any other information on how to get to Doug, I opted to continue on, rather than returning to the tree and searching again. 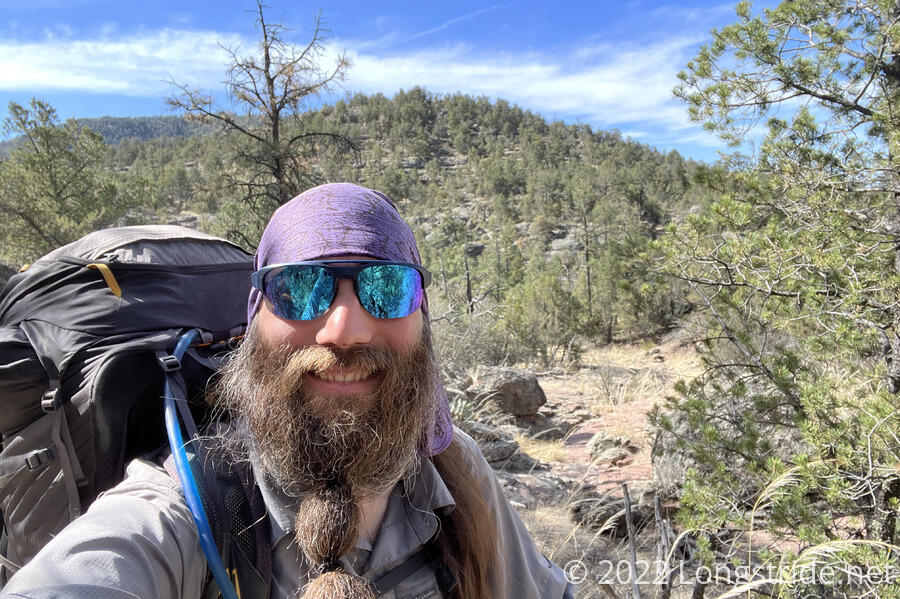 About half an hour past the Regis-tree, off the ridge and back in the forest, I stopped on the side of the trail next to a small creek to get water and have a snack. While I was there, Sprouts passed me, having also opted out of seeing the hermit.

The trail continued uphill from the creek, largely paralleling it or directly following its stream bed. After over a hundred miles of the desert, it's something completely different (and really a treat) to be going through a forest alongside of a creek.

While I was slowly chugging my way uphill, Tiempo and Let it Rip passed. They’d just come from the hermit, and noted that Pale Ale was still there when they left.

The trail popped out of the forest to another rocky ridge briefly again. When it went back into forest, the forest showed clear signs of recent fire. Ground brush was thin and all the trees were scorched. 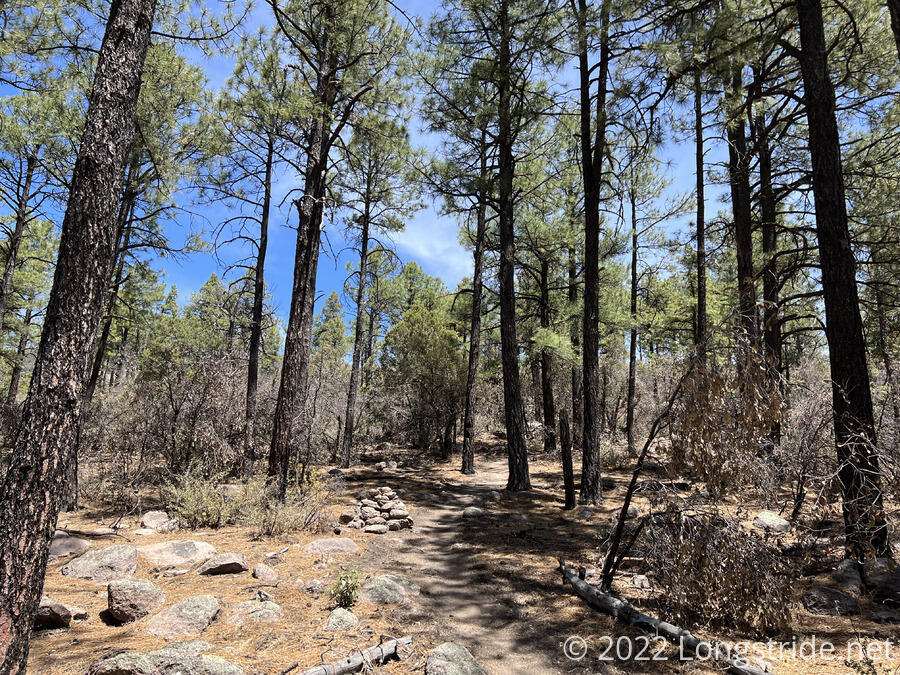 Recovering Forest in a Burn Area

The next two hours took me on one of the longest and steepest climbs to date, on par with the climb up Burro Mountain, except that this climb was definitely more exposed due to the fire. It was slow going. I passed Sprouts near the bottom collecting water.

On the climb up, scars from the fire were very visible; some sections of the mountain were far greener and untouched, while others brown and burned. 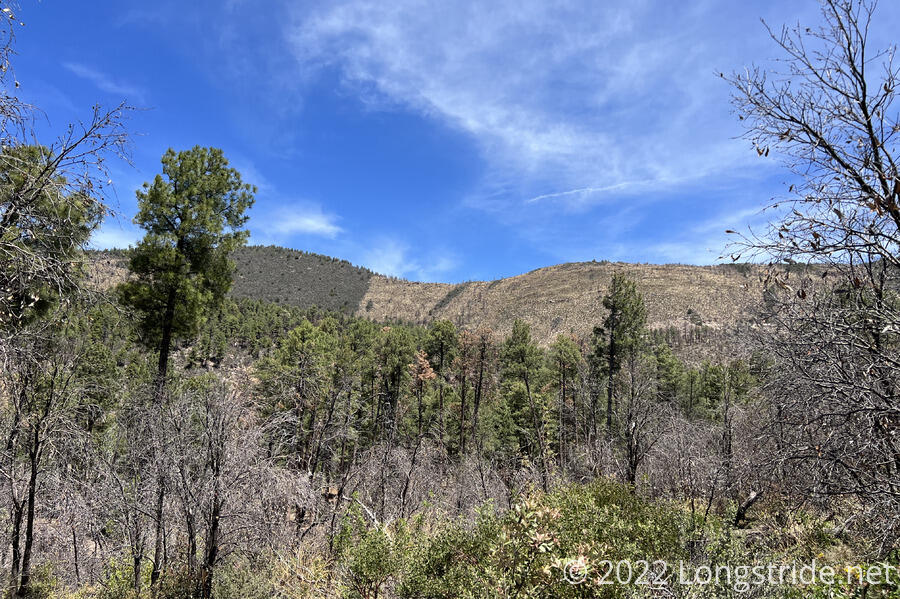 Scars From a Burn — Areas of the mountain that escaped the fire stand in contrast to the burned areas.

Just after 1:30, I finally finished the major climb of the day, and the trail reached its local high point, at the intersection with the Columbus Gila Alternate. (This alternate starts at the Mexican border near Columbus, NM, and heads northwest, crossing the CDT further east, and continuing to here.)

After crossing the top and descending a little, the burned trees stopped. The fire seemed mostly contained to the south side of the mountain. Tired after the long, steep climb, I stopped for a break.

After the steep climb, the trail began a nearly as steep but even longer descent down towards the level of the Gila River, dropping from nearly 8,000 ft to just 5,200 ft. This puts me deep in the bottom of a canyon that I’ll be in for the next several days as I hike upstream alongside (and through) the Gila River.

I crossed Sapillo Creek, and found a decent campsite between the creek and the Gila River. One hiker passed; they’d seen Sprouts earlier in the day, but not Pale Ale, so I suspected it would be unlikely I’d see either of them tonight.

Tonight is a first for the CDT: sleeping near running water. I could get used to that.

Just a few hundred feet ahead, the Gila River awaits. But that is an adventure for tomorrow.