My northward trek continues, to a very nice rest area on the road to Pie Town.

It was again cold overnight, though it might not have dipped below freezing again. In either case, I was pretty slow getting out of my tent this morning. Because it was so cold when I went to sleep, I put my phone and battery in my sleeping bag to keep them from getting too cold. Sometime overnight, I must have rolled over on the phone, cracking its screen protector. Fortunately, the phone’s screen appears undamaged, so the screen protector did its job, and this’ll just be a minor inconvenience for a while until I can replace it.

Once I got out of my tent, I found that Simple had gotten a rancher hat from another hiker sometime yesterday evening. He’d apparently been telling people he was going to get one, and when a hiker showed up with one, they gave it to him because they had tired of it. 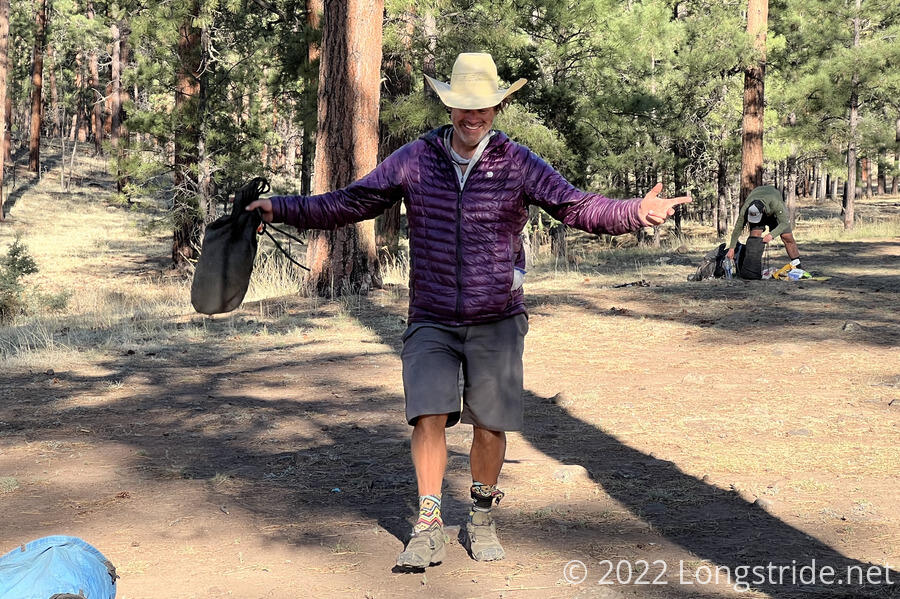 Simple Shows Off His New Hat

After I’d taken my tent down and gotten my pack packed, I had a minor panic attack when I couldn’t spot my dust-covered boots against the dusty ground. Fortunately, I just had to widen my search area a tiny bit to find them.

After a quick stop at the water cache to get water for today, we were off, heading up a gravel road towards Mangas Mountain, which has an historic fire lookout on one of its peaks. (The actual summit has a communications tower.)

I was able to see the fire lookout about an hour before I actually got there. The gravel road was not bad to hike up, and thanks to the trees and it being somewhat early in the morning, there was at least some shade. Everyone that was ahead of me stopped after a few miles for a break under the shade; I wanted to make it to the fire lookout first and have my snack break there. 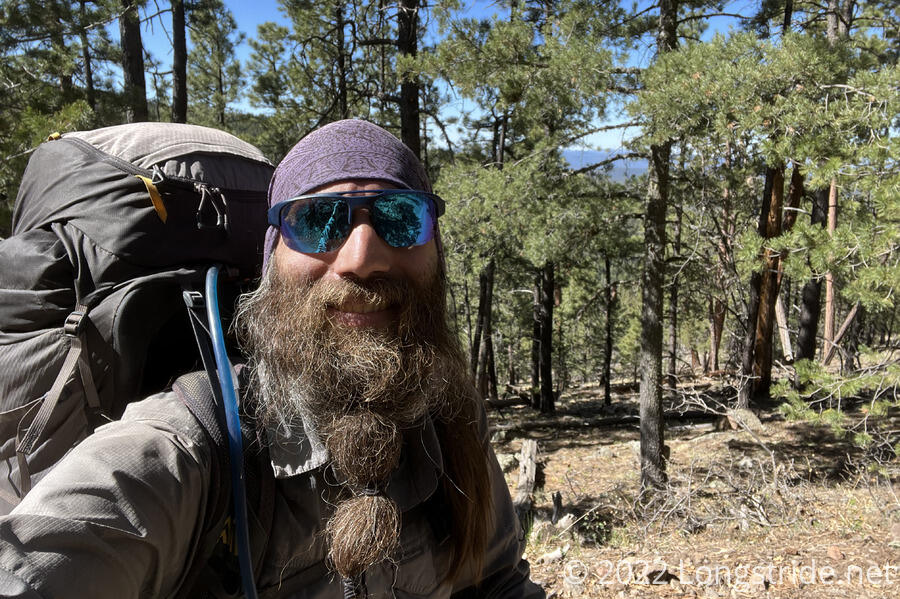 At the top of the road, where my maps indicated a trail to the fire lookout, all I saw was a cattle guard, a somewhat steep hill about 10 or 15 feet high guarded incompletely by a barbed wire fence, and no obvious way to the tower. I also saw a small horned lizard scurrying across the road. 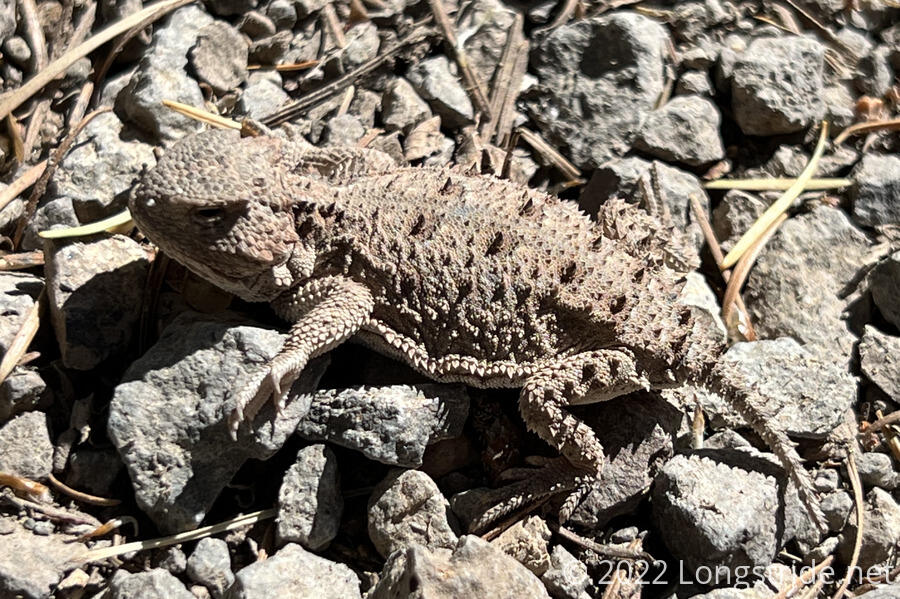 I dropped my pack and walked back a little, looking for an obvious way up I’d missed. I didn’t find one. In the delay, everyone else showed up. Simple scrambled up the side of the hill, sending down a shower of rocks and loose dirt. Dog Bite jumped up, grabbed onto a tree, and practically swung his way up the hill. I opted to follow Simple, though taking a slightly different route that I hoped would send down less debris.

Once we scaled the cliff, it was a short walk to the lookout, which had a tower, and a cabin. We went up the tower first, and met Patrick, the lookout on duty. (I think this is the first time I’ve been in a lookout tower that’s been staffed.)

We were able to see one of the fires currently ongoing in New Mexico, the Bear Trap Fire, located in Bear Canyon. 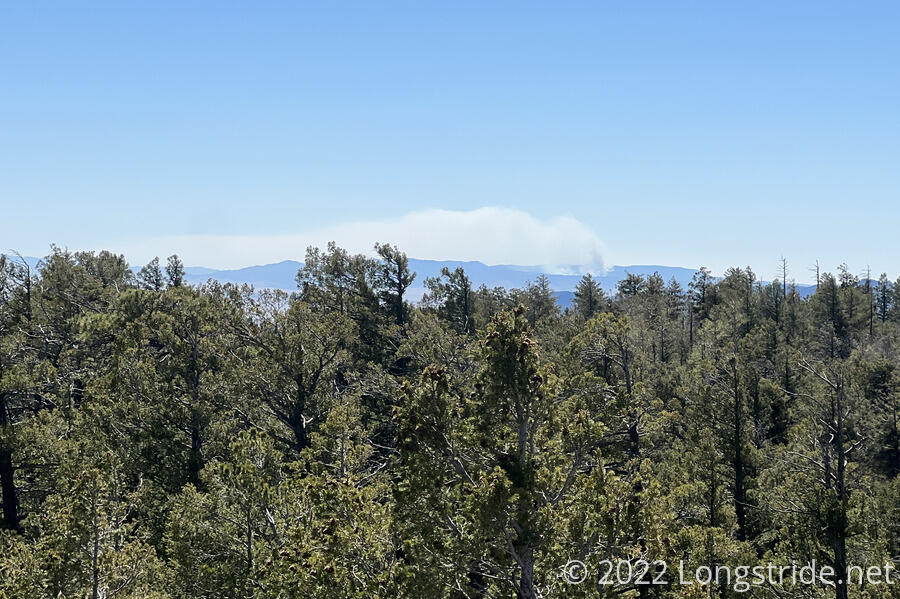 We chatted with the lookout for 15 or 20 minutes. Dog Bite was most interested in how to get a job as a lookout, so we learned a fair bit about what the job of a lookout is like. (Long hours, and lots of isolation, mostly.) While on the job, Patrick lives in the small cabin, which is a cozy but fully-functioning tiny house that was brought in on a trailer. The original cabin was demolished after a bear broke in and spent a winter there.

As we left, I ran into Arrow, who had just started up the stairs to the cabin but then had to stop when the six of us started down. I’d met her a few times on the Appalachian Trail in 2016, and she also did the Pacific Crest Trail in 2018, though I don’t think I saw her then. These trails continue to be a very small world.

After leaving the tower area (and finding a slightly easier way down to the road than we climbed up), I took a short break, since I’d yet to have a snack since leaving camp.

We followed a series of gravel and dirt roads down the mountain. They were all lined with trees, though they were generally set back far enough that in the afternoon sun, there wasn’t much shade. Not surprisingly, the road went past ranches, and there were some cows there to stare at us as we passed.

Around 2, we reached a water spigot along the road, shortly after a car junkyard. We got water there, and then sat in the shade under a tree across the road and through some scrub for about 45 minutes, letting the hot afternoon sun tick away a little.

We continued on from there, following the road for many uneventful miles. Well, mostly uneventful. Simple’s new hat blew off in the wind and tumbled a hundred feet down the road, though fortunately in the direction we were hiking, so we didn’t have to try too hard to chase after it. 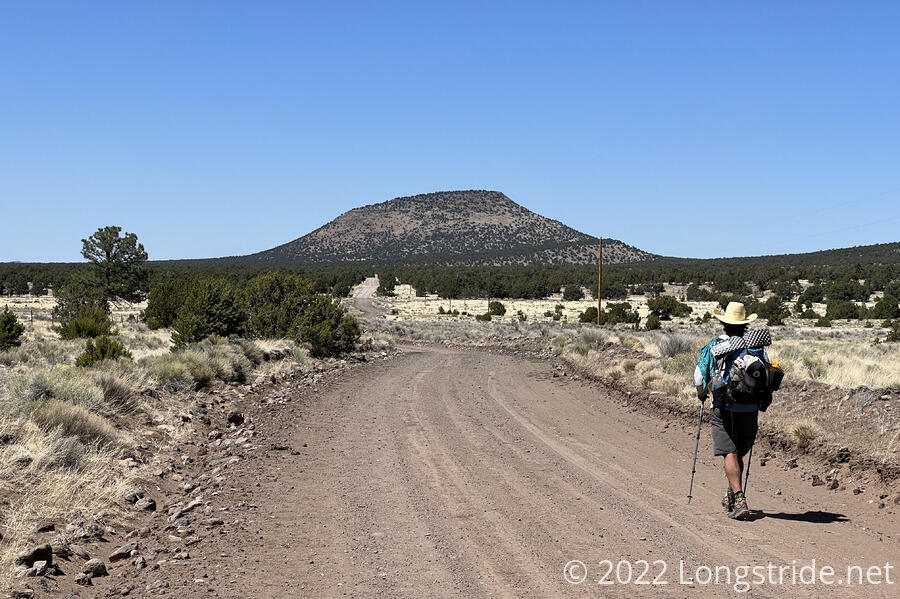 Shortly before five, we reached the Davila Ranch CDT Rest Facility. A small set of buildings made out of steel beams and corrugated metal walls, it was a wonderful donation-supported rest area on the trail. The largest structure provided a three-sided roofed shelter, similar to what one might find on the Appalachian Trail, but made out of metal and without a floor. Attached were “rooms” that had a pair of washer and dryers; a refrigerator; a shower; a toilet; and a cooking area with three propane burners. A sink stood in the open, adjacent to the cooking area. And, there was also electricity and wifi.

It is a wonderful oasis on the trail.

There were already at least half a dozen, if not more, other hikers already there before my group arrived, though many of them hiked on once the sun got lower in the sky.

My first order of business was a shower, which was one of the best (in terms of temperature and pressure) I’ve had anywhere on any trail. I’d forgotten to bring my towel in with me (not that I really wanted to use it to dry off, it’s rather dusty by now), but in my lightweight town clothes, the sun and the dry desert air dried me off rather quickly. I threw my hiking clothes in the laundry with the rest of our group. Having previously noticed Dog Bite’s underwear (same as mine) when he’d hung them out to dry a few days ago, we avoided a repeat of a situation on the AT where Beast and I discovered (too late) we had the same underwear. (In this case, the difference in wear was obvious, but Dog Bite also wrote his name on the elastic band.)

Also provided by the ranch were onions, potatoes, and eggs, and cans of pork and beans. The Brain and Patches cooked dinner for several of us; I helped with preparation. The result was quite tasty, but split six ways, it was just an appetizer for me. But, it was enough food that I only cooked my macaroni and cheese, and not also ramen.

While there was ample space to tent, I decided to risk that it wouldn’t be too cold tonight and just cowboy camp in the main shelter area.

Tomorrow, we go to Pie Town, and eat some pies.