Once again, I made the trek to the Patapsco Valley State Park, this time exploring the McKeldin Area of the park with MAHG. This hike, starting from the parking lot at the entrance to the park, featured two loops. The first visited the nearby Liberty Dam, while the second toured the river, passing the confluence of the North and South Branches of the Patapsco River, and passing by the McKeldin Rapids.

Eleven of us started out from the parking lot, heading down a relatively steep hill towards, and then crossing, Marriottsville Road. On the far side of the road, the trail climbed a steep hill before turning north, roughly paralleling the road. This trail, widely used by equestrians, was somewhat a nuisance to hike, with periodic ruts that were never quite a stride-length apart. Fortunately, the trail was not too wet; the ruts could easily have collected rainwater and become a muddy mess.

Shortly after we started, three deer crossed the trail in front of us, apparently in a bit of a hurry to be somewhere away from us.

After about three-quarters of a mile, we approached the North Branch of the Patapsco River. Although it would have been possible to cross the river since water levels were somewhat low, we opted not to chance it, and instead, followed the river to the road, crossing the river by bridge. From there, we followed a gravel road that paralleled the river, turning back to the north to head towards Liberty Dam.

Liberty Dam, completed in 1954, creates Liberty Reservoir from the North Branch of the Patapsco. The reservoir is one of three that provide the city of Baltimore with drinking water.

After another three-quarters of a mile, the trail forked. We first took the right fork, climbing a short, but very steep hill that brought us to an overlook of the dam and reservoir. While a nice view, trees hindered getting a good view of the dam. (Judging from aerial photos, it appears a trail leads to a staircase that leads down to an access road that provides a better view of the dam and reservoir, though we didn’t go that way.)

The real view came when we retraced our steps and took the left fork, following the North Branch to the base of the dam. There, we got a great view of the dam and the terraces on either side, used to slow the fall of water that overtops the dam.

After taking in the sight, we returned to the parking lot where we started; first by retracing our steps to the bridge we crossed, and then following Marriottsville Road back to the entrance to the park, a slightly more direct route that avoided the annoying-to-hike horse path.

Our first four mile “loop” completed, we set out on a slightly shorter second loop in the McKeldin area proper. Heading uphill from the parking lot, we stopped briefly to catch a glimpse of the dam and reservoir, almost exactly a mile away.

From there, we turned east, and then south, following the Switchback and Plantation trails downhill, back towards the North Branch. We again saw a deer, this time a small fawn, grazing in the woods perhaps 50 feet from the trail. It did not seem the least bit concerned by us at all. We almost didn’t see it; its brown fur blended in quite well with the brown brush, and it was only due to lucky timing when the group stopped and I turned to face everyone else that we saw it.

For almost a mile, we followed the west bank of the river, paralleling the course from last week’s hike on the other side of the river, again pausing briefly at the confluence of the North and South branches.

The confluence led us to the McKeldin Rapids trail, which followed the South Branch upstream, leading to some rapids (which would likely have been more impressive with a higher water level) and a small waterfall. The waterfall emptied into a large swimming hole (complete with a No Swimming sign) and picnic area.

Continuing north, we followed the trail to its end at a parking lot, following a road that led us to the Tall Poplar trail, which wound through the central part of the McKeldin Area, leading us back to our cars to end our three mile loop. Along the way, we caught sight of two more deer, again blending in with the brown vegetation, grazed on the dormant plants. 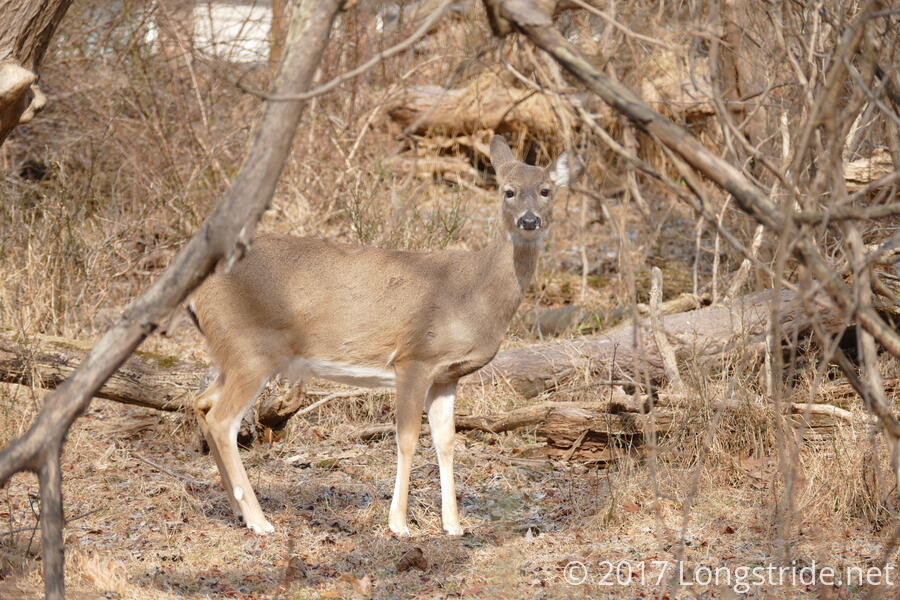