Fairfax County’s Cross County Trail is a 40-mile long trail that traverses the county, from the Potomac River in the north, to the Occoquan River in the south. Today’s hike with MAHG followed the northern section the trail, from Colvin Run Mill (just off of VA 7, Leesburg Pike) to the trail’s northern end at the Potomac River. This section of the CCT is concurrent with the Difficult Run Trail.

Although the weather was originally forecast to be nice, seven other hikers and I instead found ourselves hiking in a light rain. The rain and overcast skies served to make the trail a little gloomy, but otherwise, did not much affect the hike. Where the trail was dirt, it was, of course, muddy, but the mud was never so bad as to cause any problems.

The hike started off from the parking lot at Colvin Run Mill. The mill, built in the early 1800s, is the only still-operational water-powered mill in the DC area. From the mill, we followed the shoulder of Colvin Run Road, and passed the trailhead’s actual parking area, located adjacent to a septic waste disposal facility. 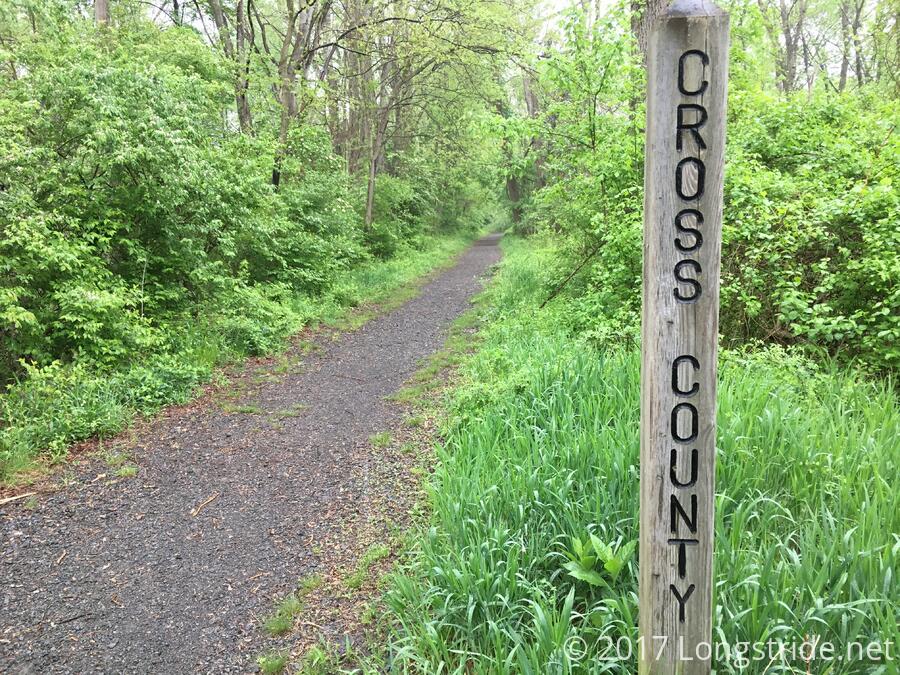 About a mile in, the trail crossed Difficult Run at an oxbow meander of the stream. A series of concrete pylons made for an easy stream crossing; otherwise, we would have had to walk through several inches of fast-moving water. 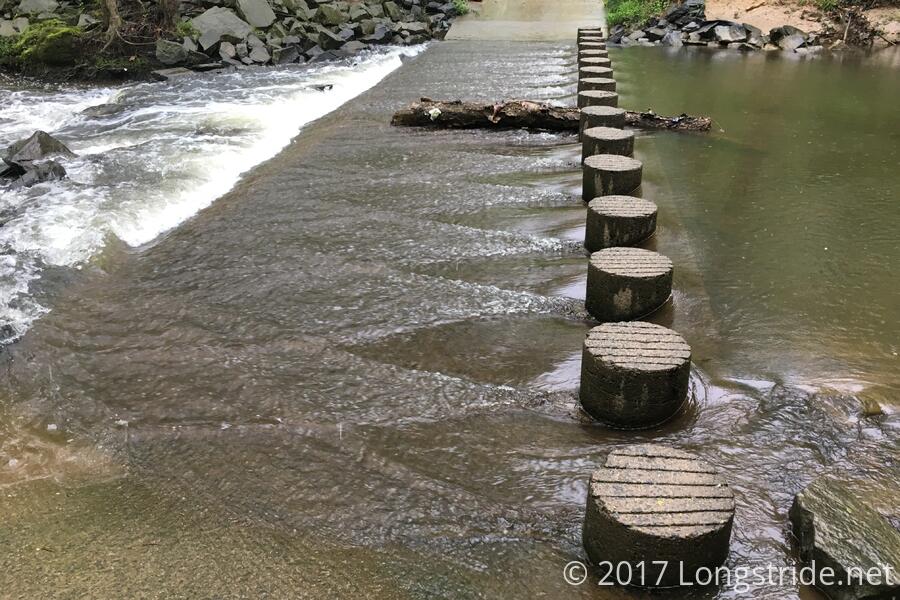 Shortly after the stream crossing, the CCT diverged from the Difficult Run trail, climbing up a hill and briefly emerging from the woods to cross an oddly-placed cul-de-sac, before retuning into the woods and rejoining the stream and its trail.

After roughly another mile and a half, after another crossing of Difficult Run, this time over a series of large stones placed to provide a crossing, the trail passed by the ruins of a house. A stone fireplace remained standing, and some wooden debris littered the ground. Several sections of the building’s roof lay collapsed on the ground.

Further on, after passing a parking area and trailhead at Georgetown Pike (VA 193), the trail entered Great Falls Park, and Difficult Run started to take on a different character. As the stream narrowed, carving its way through a rocky gorge, it began to look similar to the Potomac’s Mather Gorge, though on a smaller scale. 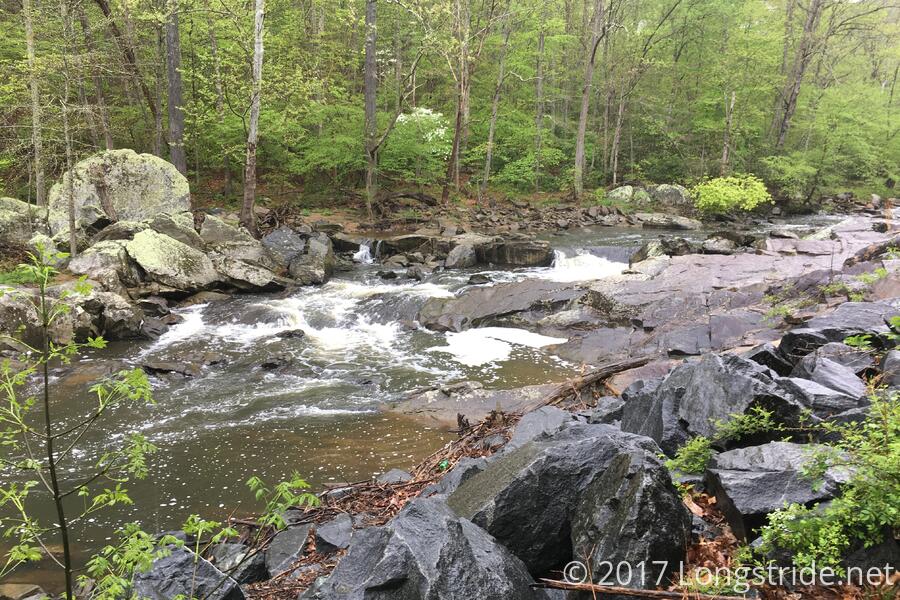 Finally, after a little more than four miles of hiking from Colvin Run, we reached the end of the trail at an open area at the top of the bank of the stream. With a nice view of the confluence of Difficult Run and the Potomac, on a dryer day, this would have been a nice spot for a picnic. 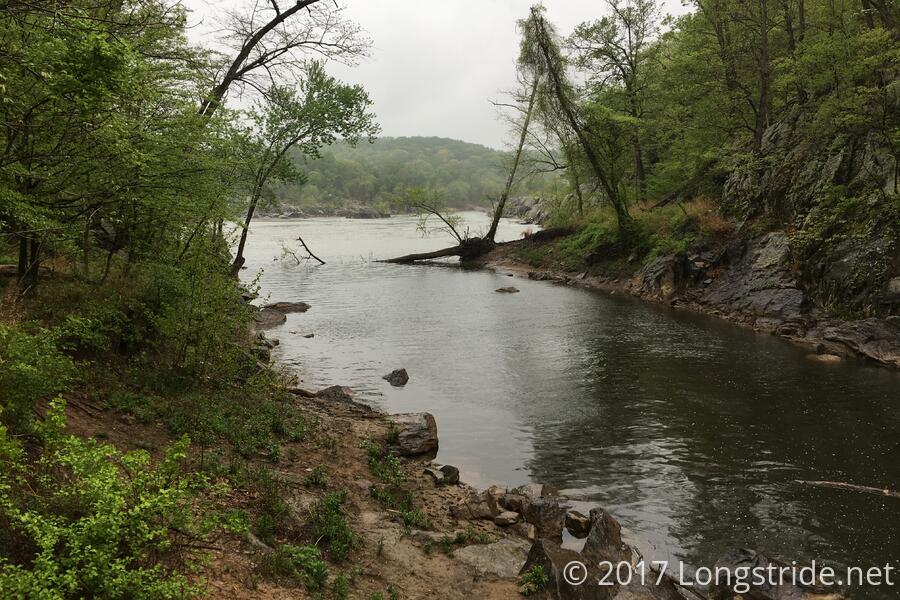 Confluence of Difficult Run and the Potomac River

The trail was relatively gentle, a gradual downhill punctuated with occasional (and very short) hills; the steepest part of the hike was the last quarter mile to the confluence, where the trail dropped 100 ft.

After a very short break, we retraced our steps, following the trail back the way we came. Our ideal lunch break dashed on account of rain, we stopped for lunch underneath a bridge. While less than ideal, it was still dry.

The hike back to Colvin Run was largely uneventful. The trail, while slightly muddier after a few hours of very light rain, and slightly uphill instead of downhill, was just as easy, and an enjoyable way to spend a Saturday morning. 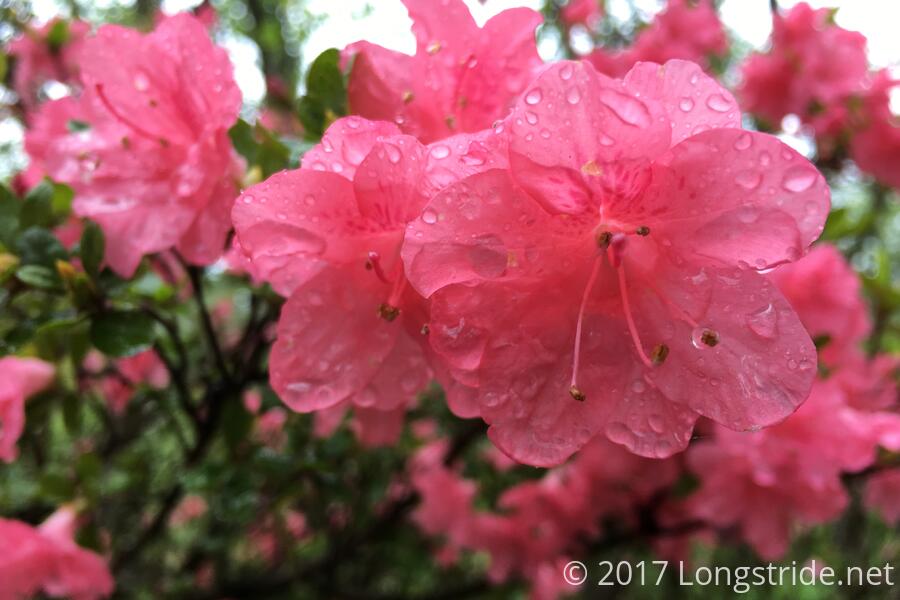