Today, I took an excursion to the Meadowood Recreation Area in Lorton, VA. Managed by the Bureau of Land Management, Meadowood has about 14 miles of hiking trails, in addition to mountain biking and equestrian trails and two fishing ponds. The park’s trails also are host to two national trails: the Potomac Heritage National Scenic Trail, and the Washington-Rochambeau Revolutionary Route National Historic Trail.

A friend and I started off at a parking area on Belmont Blvd, roughly in the middle of the park, and headed east along the Meadowood Connector trail, which connects the two wings of the park, which are otherwise separated by a residential community. Almost immediately after entering the woods, we saw a deer, bounding away from us deeper into the woods.

Following the trail for about three-quarters of a mile led to the Wood Thrush Loop trail, and from there, we began a large loop covering the eastern portion of the park.

On the far eastern side of the park, there is a parking area suitable for horse trailers, and the ground bore ample evidence of very recent equestrian traffic. Despite the significant quantity of fresh manure and horsehoe prints, we did not actually see any horses.

We did, however, see a frog, and there was no shortage of spiders and spider webs, especially during the eastern half of the hike. (We were clearly the first people to go through this morning.) 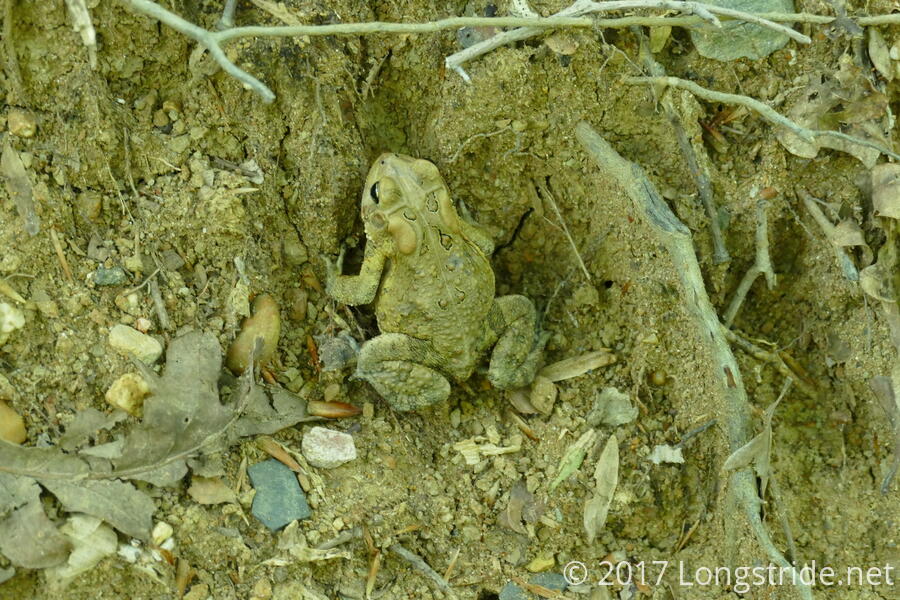 The eastern trails, all built for equestrian use and well maintained, were comfortably wide — easily allowing for two people to walk abreast, which came in handy given how often we needed to maneuver around manure piles. Only two small areas were not under tree cover: a large field housed the Mustang Loop (which connects the horse trailer parking to the rest of the park), and an area with tall grass adjacent to a pond (for which we did not take the side trail to).

Whereas the eastern side of the park has an equestrian focus, the western side has a large focus on mountain biking, including three trails covering two miles, set aside specifically for mountain bikes. And, while we never saw horses, it didn’t take long for us to come across a group of mountain bikers.

From the parking area, we took the South Branch Loop clockwise, winding our way through the woods. Here, the trail weaved to and fro significantly more often than on the eastern section. There were quite a few switchbacks, several of which I suspect were largely for the benefit of bikers.

There are only two hiker-only trails in the park. We followed one of them, Giles Run, from its intersection with the South Branch Loop. The other is the Sapling Trail, which is a cutoff between two forks of Giles Run. Ironically, Giles Run did not actually go near its eponymous stream.

Of the trails we hiked, Giles Run was the least-well maintained trail in the park (though, that is not to say it was poorly maintained). Following the trial curved us around the western side of the park, and brought us to a parking area off of Old Colchester Road, and we sat down on a bench for a short break.

Benches were one thing I hadn’t mentioned so far, but there were a fair number of benches throughout the park. I always like to see a good park bench: sitting on a bench for a break beats sitting on the ground.

Giles Run ended, turning into the South Branch Loop, which we continued to follow the rest of the way back to our cars. 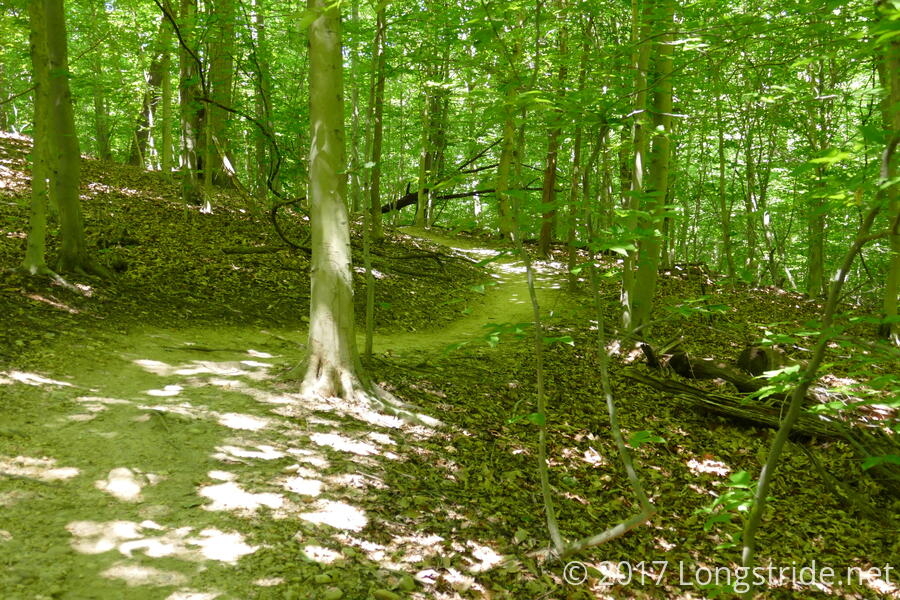 The hills in Meadowood were not very challenging, being short or moderated by switchbacks, making this a fairly easy hike: it took us just over three hours to hike 9.5 miles, giving us a rather incredible pace.

Starting off at 9 am this morning was a great idea, which let us finish just after noon. Already 80 °F when we started, and got up to 90 by the time we had finished; good thing it was shaded, or we’d have burnt to a crisp.

There were no great views on this hike: it really was just a simple walk in the woods. But sometimes, that’s all you really need.