After a bit of last-minute running around my home, my friends Andrew and Monica picked me up and gave me a ride to the Silver Spring Greyhound Station. Although I left my house a bit later than I intended, I still got there with plenty of time to spare before the bus started boarding — rather, I got there before the bus did! Today's destination is Williamstown, MA. The town, close to the Vermont border, is the nearest town to the Pine Cobble Trail, which I'm using as an approach trail to the Long Trail tomorrow.

It had been awhile since I'd been on a bus for long-distance travel, so I had forgotten just how much space busses have compared to airplanes. (Though, I think the train I took to Gainesville, GA for my Appalachian Trail thru-hike last year was a little bit roomier.) The bus was relatively comfortable, and had plenty of leg room, though the seat didn't really feel well padded. After sitting in it for several hours for the trip from Silver Spring, MD to New York City, the seat was becoming a literal pain in my ass.

The bus driver, in an unusual accent I couldn't place, made sure to tell everyone in the fairly quiet bus, several times, to please keep conversations "short, personal, and quiet". He then went on to say that he only had one DVD, and proceeded to play it: it was the usual feel-good marketing drivel by high-ranking bus company executives, and I tuned it out immediately, opting instead to continue catching up on a backlog of podcasts that started accumulating during my AT hike last year that I still haven't completely cleared. (With 11 hours of bus travel today, I managed to catch up on half a month's worth of podcasts at 2x speed, so now I'm "only" two months behind.)

I'm glad I had that distraction, because the video screens on the bus to New York City ran for almost the entire trip with just a DVD logo bouncing around the screen as a screensaver. (You'd think the driver could have just turned the screens off instead.)

The bus trip up to New York City was entirely uneventful, though I was not expecting the bus to pull over for a few minutes so the driver could use the restroom! (Fortunately for us, we did not have whatever problems caused three other busses to be pulled off on the side of the road shortly after, and another bus later in the evening to be pulled over and in the process of being hitched up to a tow truck.)

The bus dropped us off at the NYC Port Authority's bus terminal, which was far larger than I expected a bus terminal would be. (Though, in retrospect, it's in New York City, so its largeness should probably not have been unexpected.) The terminal was surprisingly low-tech, though. Given how many gates they had (must have been near a hundred, if not more), I was expecting an airport-style arrivals/departures board. However, there was nothing. I had to talk to four different people before I could find out exactly where I needed to be to catch the bus from NYC to Williamstown, MA.

The relative disorganization quickly made itself quite clear. Shortly after I sat down at the gate with lunch, a tall, muscular young woman with a hockey stick and an overstuffed suitcase larger than my pack, and her mother, showed up at the gate, though they seemed uncertain that they were in the right place. The girl with the hockey stick disappeared for awhile, and then came back later in a hurry — they were in the wrong place — and somewhat recklessly grabbed at her suitcase, dragging it along as the two of them rushed up an escalator. The suitcase, bulky and unwieldy, was as hard to control as one might expect, with hockey girl's strength and its momentum combining to causing it to twist and turn in ways it was not designed to move, culminating in one of its wheels popping off as she struggled to control it on the escalator.

I suppose it wouldn't be New York City without a pigeon or two. There were at least two pigeons wandering around (and occasionally flying around) the terminal, eating crumbs off the floor. 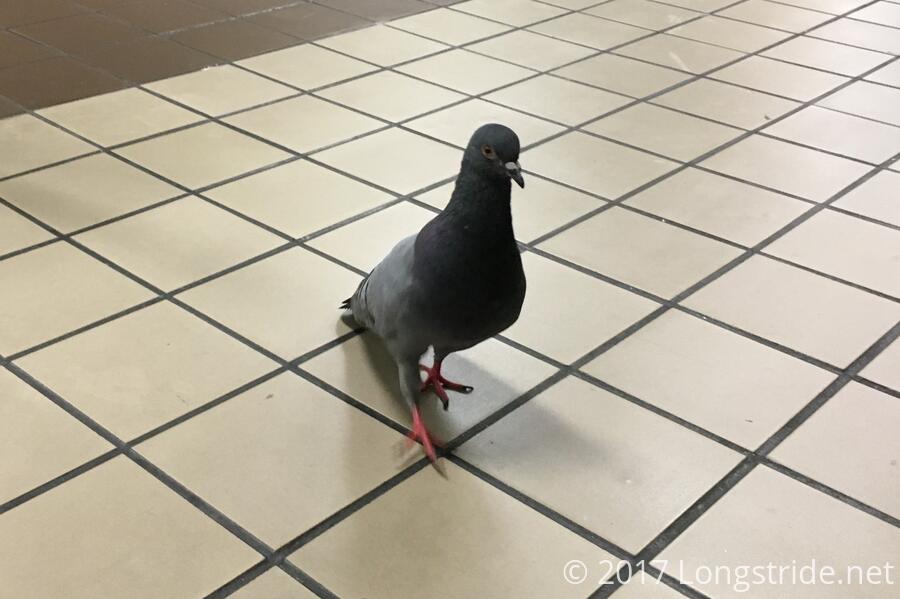 Like the segment from Maryland to NYC, the segment from NYC to Williamstown, MA was relatively uneventful. Since entering Massachusetts, the bus had been running about ten minutes ahead of schedule, and I got to Williamstown ten minutes earlier than expected, stopping directly in front of the Williams Inn. Had I realized that's where the bus stop was, I'd have considered booked a room there instead of at the Willows Motel, which was a fair bit cheaper. At the least, it would have saved me a mile walk to Willows.

So I started walking to my lodging, walking along Williamstown's Main Street, which also cuts through the Williamstown College. It being July, there were only a few college students out and about, and the walk was quiet, save for an unexpected church bell at 9:45.

About halfway between the bus stop and my hotel, at an intersection, a car turned the corner, stopped, and asked if I needed a ride somewhere. I'm not even on the trail yet, and I'm already being offered trail magic! This is what I love about trail towns. People are just so incredibly friendly and awesome. It's good to be back!

The quick ride down the road turned out to be a great boon: we got to Willows Motel shortly after the office had closed! Fortunately, the live-in managers hadn't yet gone to sleep, so they were able to check me in without any problems.

Tomorrow: The weather forecast is looking a bit iffy, with a chance of thunderstorms during most of the afternoon. That's not going to stop me, though. I'm back, and it's time to hike.