With three more days to get to Skykomish, CareFree and I made good progress today. Though a bit cold this morning, which slowed our departure, a strenuous 20 mile hike kept us on-schedule for town.

We started off with a short uphill to an overlook of Spectacle Lake, a largeish lake nestled in a valley and nearly situated right on the edge of a cliff. It looked pretty amazing from a distance, and I bet camping on it would be nice. 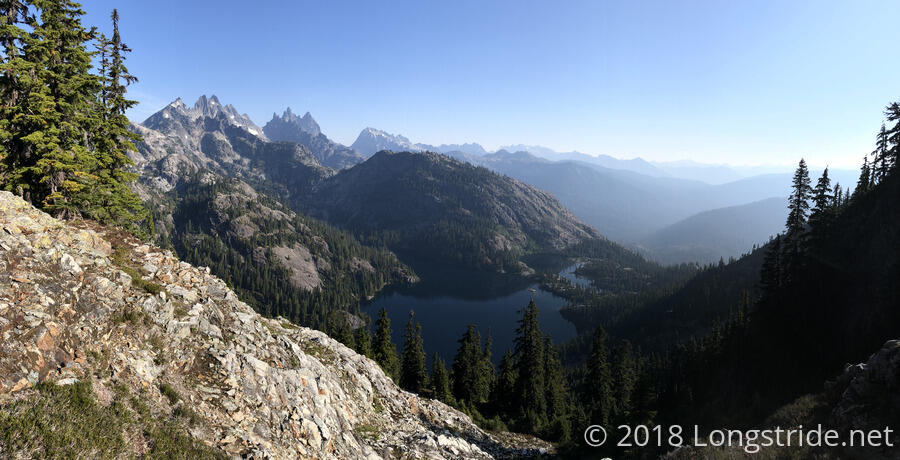 Fire in the distance filled the air with a light smell of smoke, though as we proceeded downhill — and passed through a burn area — the scent gradually diminished. Later in the day, though, the haze from the smoke was evident.

As I had anticipated, Spectacle Lake drained through a creek that had a waterfall just above where the trail crossed.

The trail was a bit steep, and somewhat rocky, and so we wound up going slower this morning than we’d have liked; it took us two and a half hours to make it five miles to a trail junction, where we stopped for a break. While there, a butterfly landed on my pack, and then moved to my shoulder before returning to my pack. It was actually somewhat tricky to get a good picture of it; it seemed to prefer keeping its wings closed, rather than open. 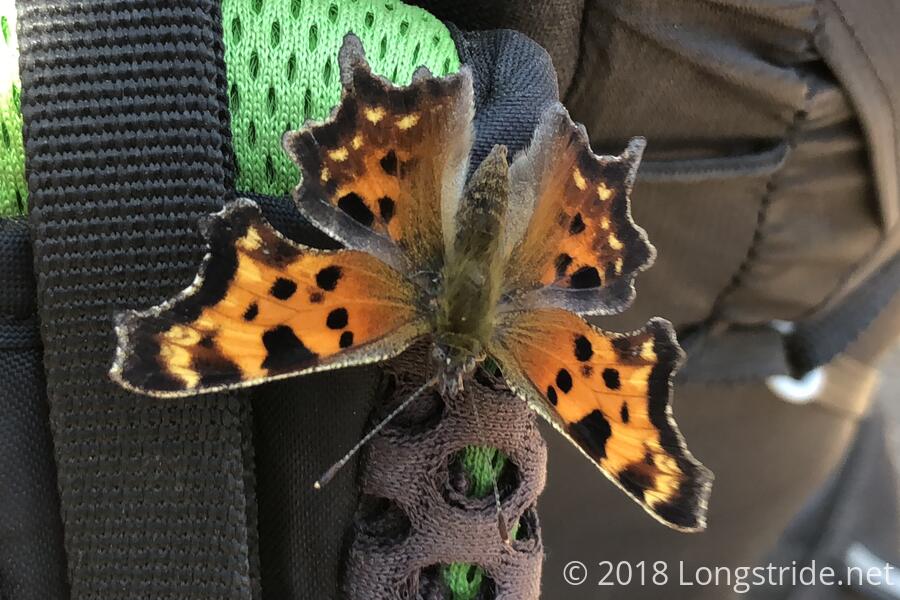 There, we also received some sad news from Good Karma when he caught up with us. He confirmed that the hiker that fell off Kendall Katwalk yesterday died, and that apparently SAR had a somewhat difficult time of finding her. It’s an unfortunate reminder that out here, it’s very easy for things to go terribly wrong without warning.

We continued on, hiking across a valley for a couple of miles. At Lemah Creek, a bridge crossing the creek was out — only its supports on either bank remained — and we had to cross on a log a short distance downstream. This wound up being a bit tricky, as the creek was pretty fast-flowing, and the north side was a bit overgrown, making it hard to get off the log. It wasn’t the worst log crossing I’ve attempted, though, but I was happy to be across.

The trail continued up the valley, before beginning a long, steep series of switchbacks to climb up the next mountain, and we climbed almost 3,000 feet over five miles. Although steep and tiring, it wasn’t otherwise especially difficult. As we climbed, the tree cover gradually diminished, making it ever easier to see the multi-cascade waterfall on the slope across the valley. 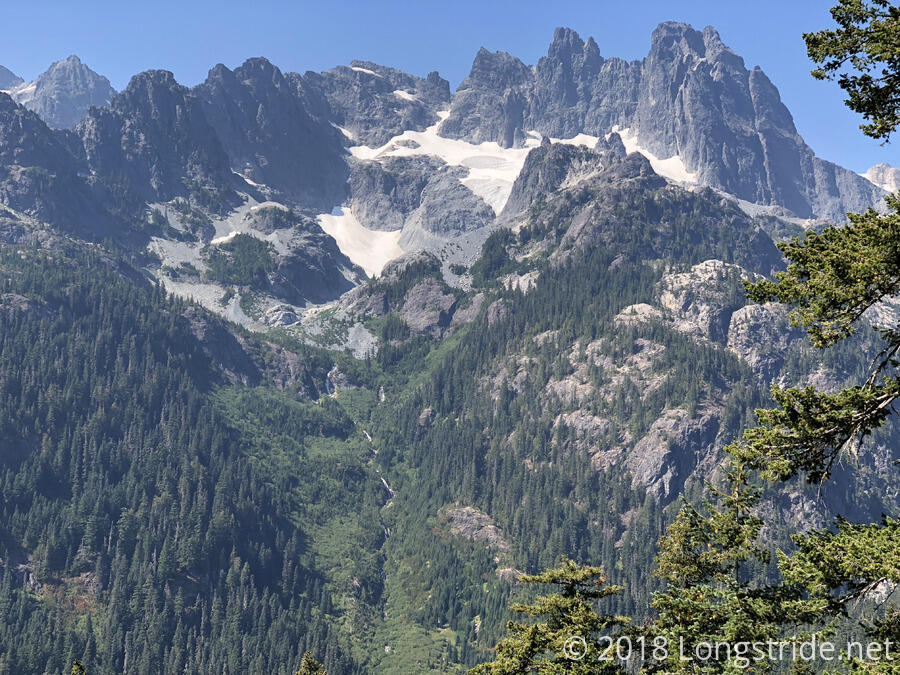 Near the top, seven miles from our last break, we took a break at a beautiful pond, nestled in a small depression in the mountain.

After about two miles of wrapping around the mountain, only losing a little elevation, we began a long descent. Following at least as many switchbacks as on our way up, we were able to see views of Waptus Lake, which was gradually obscured by the trees as we descended. We stopped at a campsite just past the bridge over the Waptus River, which feeds the lake.

With a fairly large day of elevation change — about 3300 ft up and 5300 ft down — we were pretty tired, and with only about 45 minutes before sunset, we didn’t have a whole lot of time to get camp set up and get water for dinner before it became dark out. As we get closer to fall, and further north, we’re losing daylight faster than ever. I think right now, it’s about three minutes per day, which seems almost incredibly fast. Fortunately, though, it was very easy to get water from the river, and it’s warm out, so we didn’t waste any time with difficult water or cold air.