Sunday started off somewhat lazy. Thanks to Beast's parents, the four of us had free upgrades to the hotel's excellent breakfast buffet.

Loon and Verge continued to attempt to find a way back to the trail, which had proved to be difficult yesterday, with several different taxi agencies either not answering, hanging up, or otherwise being generally unhelpful. They were eventually successful getting a ride with Hitch-a-Ride, whom we had used to get back to the hotel last night.

For tomorrow, we knew that we could get a ride from the NOC's store here in Gatlinburg back to the trail; the NOC itself operated a shuttle at 10 am, and the local Baptist church ran shuttles at 9 and 11. But we still needed to be able to get to the store, which was difficult since the local transportation services don't really operate that early, especially the trolley, which only starts at 10:30.

Fortunately, one of the front desk staff, who had helped us out a bit yesterday (and also gave us a ton of free, tasty, fresh-baked cookies), offered us a ride into town, if she were working tomorrow (she'd have to check later).

Meanwhile, Beast and I went into town to get him a replacement pack, at the NOC store. (One set of hip straps on his pack had broke, and the other set were showing signs of fatigue, and the broken strap was causing the pack to sit on his shoulder, making it painful and almost unusable.) Getting into town was more challenging than we anticipated, since the trolley was very slow to arrive. On a website tracking its position, shown in the hotel lobby, the trolley was motionless, with an ETA oscillating between 6 minutes, 5 minutes, and Unknown.

Eventually, the trolley showed up, as we were starting to try and pick out likely people to ask for a ride, and at the store, Beast was able to find a replacement pack (a newer version of his old pack). Unfortunately, it's slightly different design also meant his existing hydration bladder wouldn't fit, so he had to get a new hydration bladder as well. I helped him set up a quick-connect system similar (though less sophisticated, due to lack of parts) to mine, so that he doesn't have to take his water bladder out of his pack to refill it.

We also signed up for the 10 am shuttle between the NOC store and Clingmans Dome.

Afterwards, we went to Smoky Mountain Brewery, a local brewpub, for lunch and beers. We chatted for awhile, mostly about nothing, and eventually left to take care of other errands. (There was meat jerky and superglue to obtain.)

On Saturday, at the behest of the hotel's bartender, whom Beast had befriended, while we were in town, we played a game of count-the-camo. (Basically: count the number of people wearing camo outfits.) We counted 37. We attempted the same today, but only got 3. (Fewer people, but apparently, camo is a Saturday evening thing.)

This also reminds me: when we were inquiring about the laundry room yesterday, some of the staff was unaware there was a guest laundry room, and none of them knew how it worked (e.g. coin-op or dollar bills), or how much it cost.

Also: Gatlinburg is a weird town. 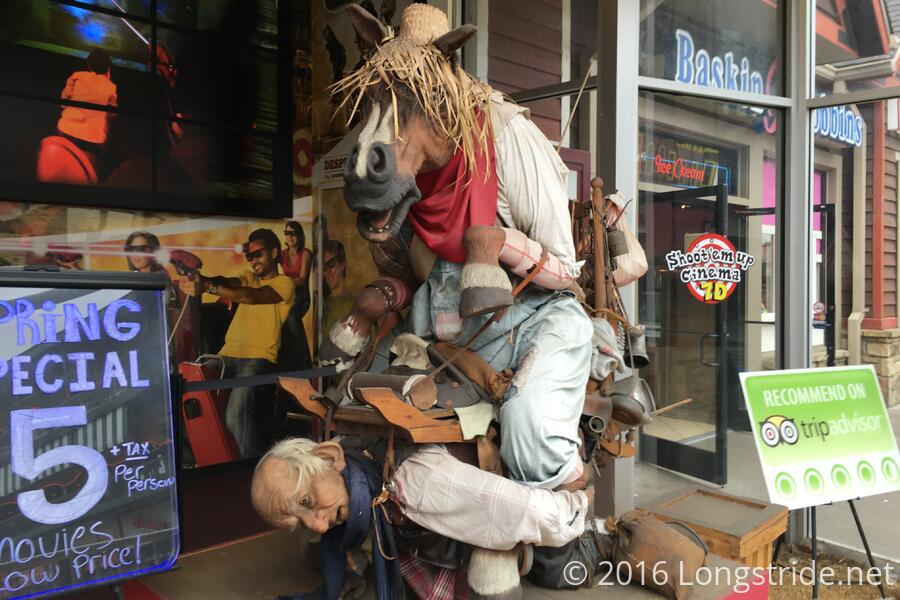 After obtaining jerky, we still had (quite a bit) of time to kill, so Beast and I went into the Ripley's aquarium. It was kind of expensive, and some of the exhibits were kind of sad (a tank of fish who identify each other by their stripes to form schools only had one fish in it).

We had seen an ad for the aquarium at the restaurant, where we made fun of the clearly-stock-photo models and their mock amusement/astonishment, so we were kind of worried when we saw the same backdrop and a photographer about 30 ft inside the door.

It wound up being worth it, though, and we both got some good photos of sharks and swordfish swimming over our heads.

Towards the end, there was a food court, so Beast got a fried fish sandwich to eat ironically in front of the fish. This wound up taking some effort, since the only employee at the counter was a trainee, and things kept breaking for him. 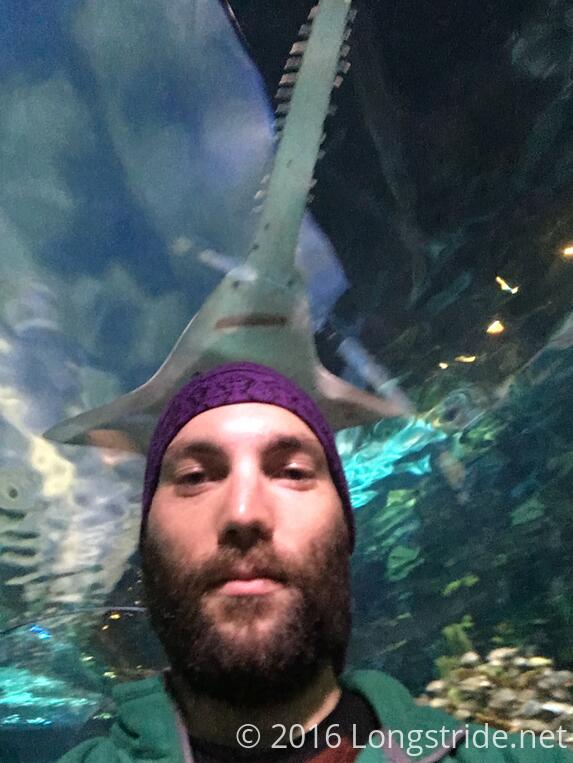 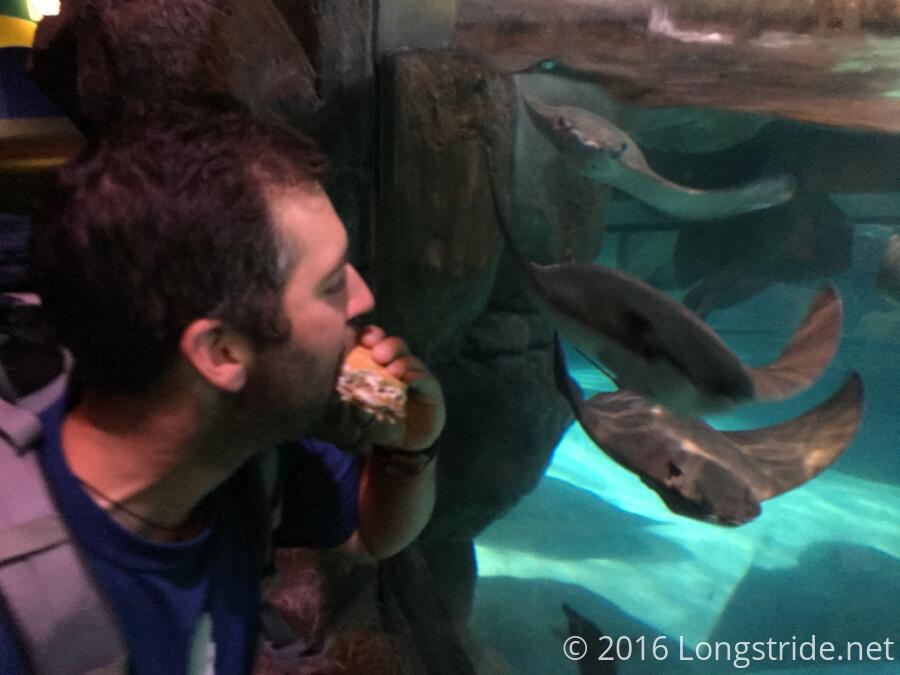 Beast, eating a fish sandwich, in front of a fish, Just Because. 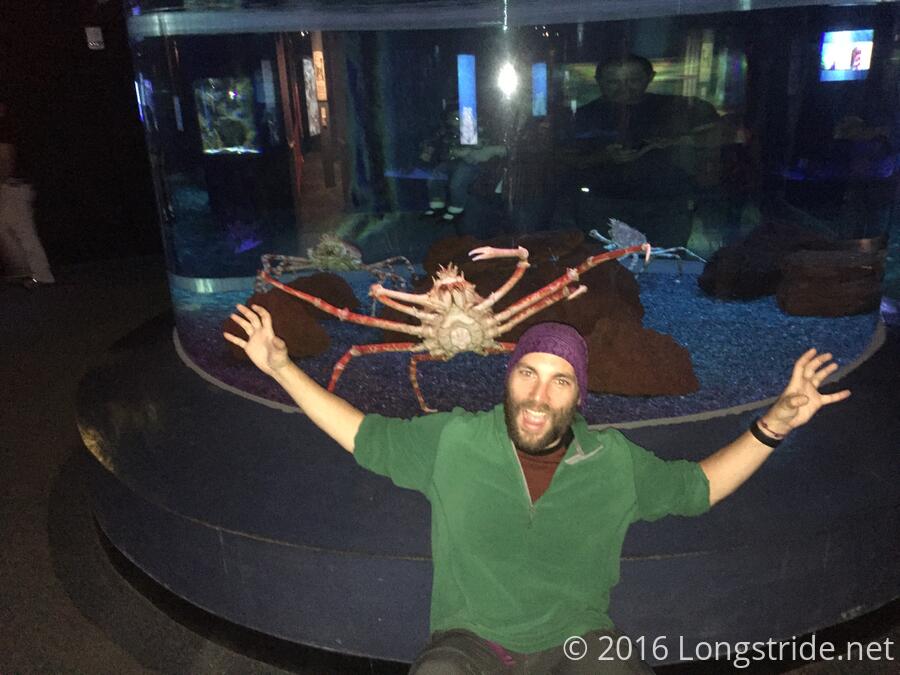 A Crab as Big as my Head

Afterwards, we went to a Mexican restaurant, Loco Burro, for drinks and dinner. While we were sitting there, a bro dude and his two bro sons sat down on the outdoor couch adjacent to our rooftop table, and began smoking cigars. Meanwhile, their bro wife/girlfriends/sisters took pictures of them attempting to look manly, for five or ten minutes. I wish I could have gotten a picture of them; they all looked ridiculous.

After we left, we obtained superglue to attempt to repair my failing trekking pole (the top pulls out, and it's not supposed to; a repeat of the same thing that happened to the other pole coming down Blood Mountain early on).

Back at the hotel (with the same ride as last night) we repacked our packs, which took until midnight (a.k.a. hiker 3 am), due in no small part to being distracted by the movies on tv, forgot to arrange our ride to NOC in the morning, and fell asleep.