The last three days have been strange beyond belief; I've attempted to convey that oddness over the previous two entries, but it's truly not possible to convey just how strange it has been. Gatlinburg has been a strange little town that we've visited, and that strangeness simply does not want to let us go. (Well, mostly Beast; nearly all the unfortunate things the last few days have been at his expense.)

The day started off well enough, and then quickly went downhill. We went back to the hotel's breakfast buffet and continued to gorge ourselves with food like we were starving. (We're not really, but when you burn 4000+ calories on a typical day, it's hard to actually eat enough to cover that.)

On Beast's second omelette, he made the unfortunate realization that, unlike yesterday, "all the toppings" today included mushrooms.

Beast is allergic (or at least, highly intolerant) to mushrooms.

With really nothing else Beast could do but wait (and hope breakfast went out the correct end), we retreated back to the hotel room, where he attempted to relax, and we watched some awful tv show of daft celebrities making fun of awful (and painful) videos from the Internet, followed by a documentary on the likely emergency response to a terrorist nuclear attack on the U.S. (I suppose this was fitting parallel to the terrorist mushroom attack on Beast's stomach.)

Fortunately, after an hour or so, Beast felt less unwell, and we arranged for a Hitch-a-Ride to the NOC store (this time in a covered and exceptionally loud six person golf cart, rather than a minivan).

The shuttle first made a stop at Newfound Gap first (7 miles ahead of Clingmans Dome), where there was some trail magic: a local group was offering a large assortment of snacks and sodas. I grabbed only a soda since I was otherwise drowning in snack bars. Unfortunately, in my haste to get back on our shuttle, I forgot to get the name of that group.

Dropped off at Clingmans Dome, Beast and I slowly made our way up the half-mile steep asphalt path (so we could not use our trekking poles to provide advantage). At the parking lot, in what must be the understatement of the century, a sign warns that the trail is not ADA accessible. 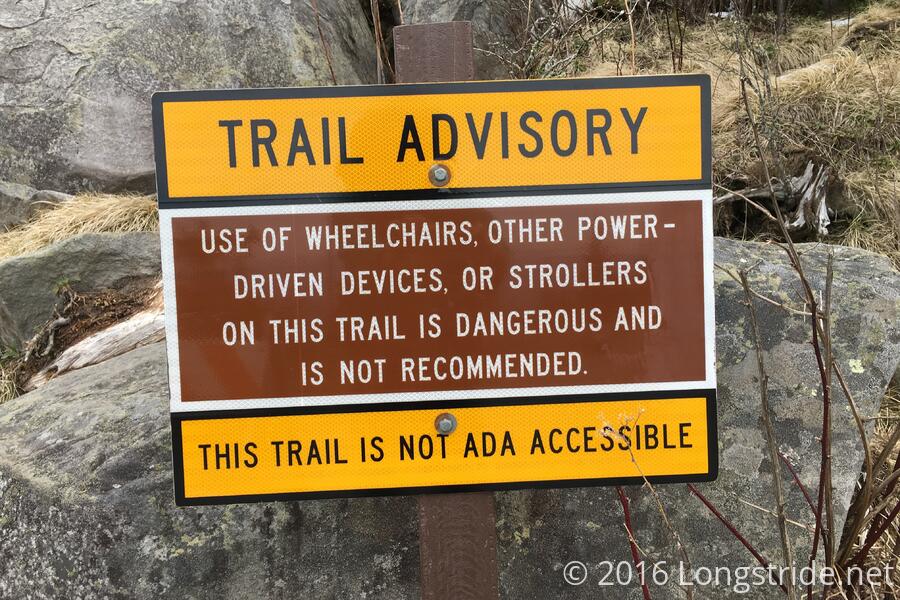 Trail Advisory — The understatement of the century: "Use of wheelchairs, other power-driven devices, or strollers on this trail is dangerous and is not recommended. This trail is not ADA accessible."

At the top of Clingmans Dome is an observation platform, significantly elevated to allow a wonderful panoramic view of the surrounding mountains (from the highest point on the AT, and also in the Smokies). Unfortunately, the platform itself is an incredibly ugly concrete structure, a spiral up to an observation deck balanced on a 50 or 100 ft tall concrete pole.

At the top, we ate half of the buffalo jerky we got, and then after a short rest, got back on the trail. Unfortunately, the warmer weather had melted some of the snow from the previous days, and the first half hour of our descent from the high point on the AT was slowly down very slippery ice. We could do nothing but make slow progress and complain and laugh at the absurdity.

The absurdity continued when we wound up going up a large hill while vaguely going down the mountain. This is clearly the source of all "uphill both ways in the snow" jokes. I can legitimately say I've done that now.

Despite the snow from a few days ago, the signs of spring are slowly becoming stronger. I passed more hillsides with innumerable tiny flowers in bloom. 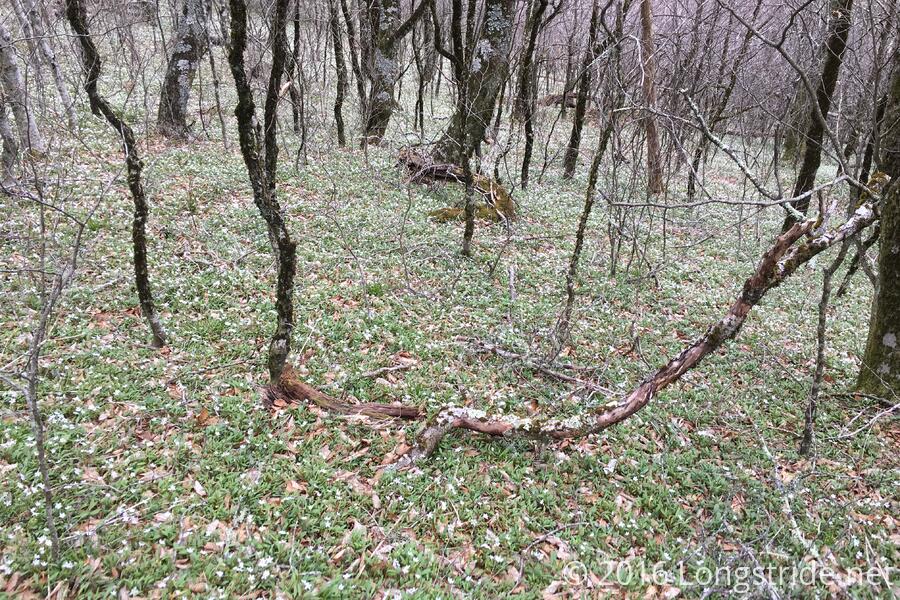 Once we found the downhill, I quickly (and a few hours later) made my way back to Newfound Gap, where more trail magic awaited: a man (who insisted on remaining anonymous), provided bananas and (large) bottles of Power-ade to thru-hikers. (Thank you again, Mr. Anonymous!)

Beast took a little while to catch up, having to stop to adjust his new pack (and unfortunately release the remains of his mushroom apocalypse), and then deal with a sugar-water explosion from one of his water bottles which squeezed open when he was trying to get it out of a tight pocket obstructed by a misplaced strap. 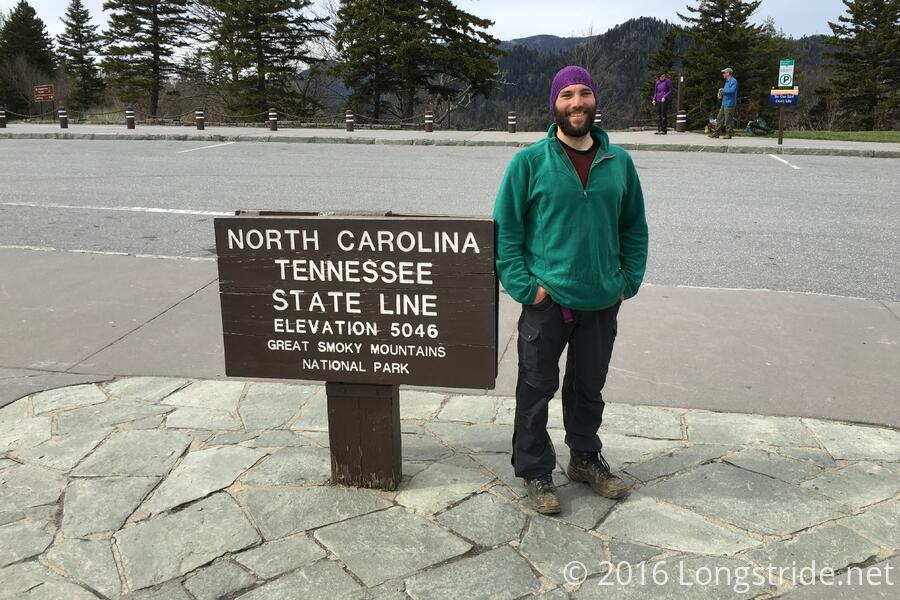 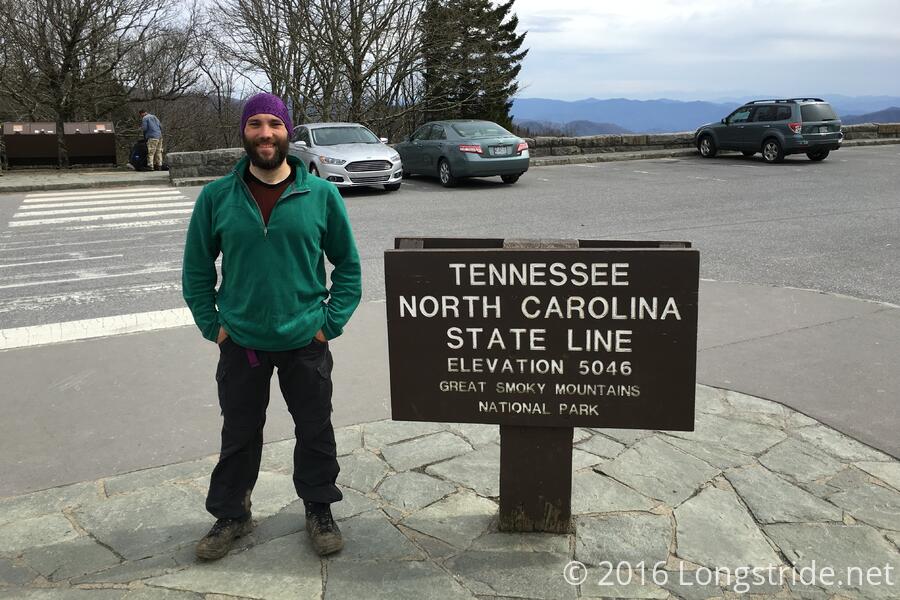 After getting photos of ourselves at the NC-TN state line sign (and TN-NC, on the other side of the sign), we practically charged up the 3 mile hill to tonight's shelter, Icewater Spring.

I dare say I may have found my trail legs; jury's still out if today's uphill endurance was a fluke from the several large meals in town over the last few days and the afternoon's trail magic, but if I can keep this up, I'll be very happy.

The absurdity continued through dinner, including a stove that refused to ignite; an accidental loss of water when a container got knocked over; trash that refused to stay put and insisted on blowing away; my spork bag actually blowing away (though not too far); and a huge jealousy on our part of the roaring fire in the shelter (and reflective metal in the fireplace to better redirect the heat into the shelter).

Due to our late start, we wound up being forced to tent (the 12 person shelter is filled with 17 people and we can't really cram in). This is less than ideal, since (as I write this) it is windy and rainy, and though I am dry, gusts of wind blow my tent in on itself, causing it to occasionally hit me.