Our third day in the Smokies briefly reconnected us with civilization, before veering further off into the wilderness.

Around midnight, a few loud rumbles of thunder and flashes of lightning rang out, and we closed the tent’s rainfly, which we’d left open for ventilation. There was no forthcoming rain, and after a few more long, deep rumbles, whatever passed for a “storm” blew away to trouble someone else.

By the time CareFree and I woke up, around 7:30, it was a little bit cooler than it was last night, and the two guys that shared the campsite yesterday were long gone. The bees were back in force, busy colonizing my tent. Over the course of breakfast, we had to keep carefully shooing them away; right before we left camp, CareFree counted eighteen of them on her trekking poles.

For about two and a half miles just after leaving camp, the trail closely followed Fontana Lake. One short spur from the trail took us directly next to the lake, and we could see large fish swimming near the shore. Along the trail, we could occasionally hear or see boaters on the lake, as well. 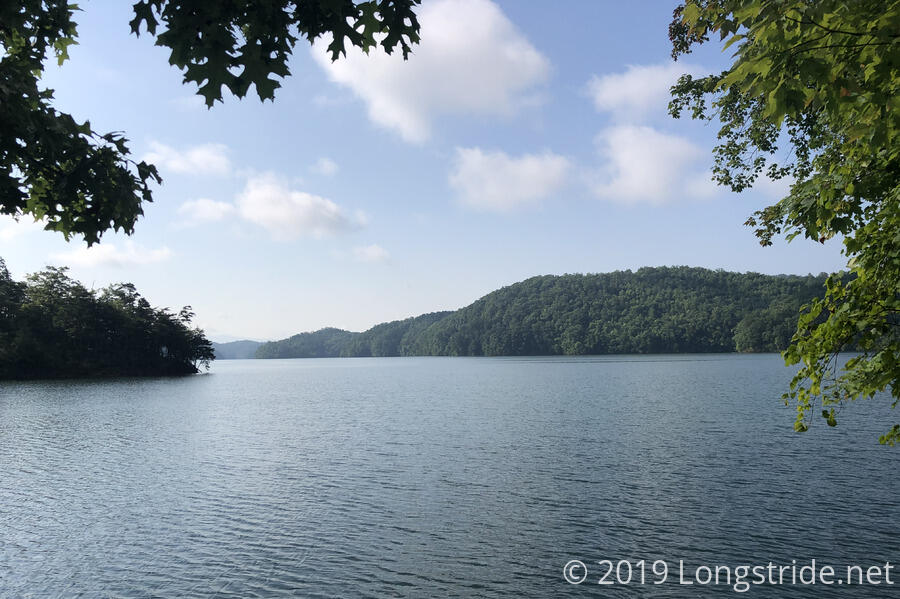 Because we were so close to the lake, we were able to see down into some of the coves along the lake’s edges. Sadly, they looked like watery trash dumpsters, with tires, gas containers, tree trunks, and other pieces of flotsam and jetsam. 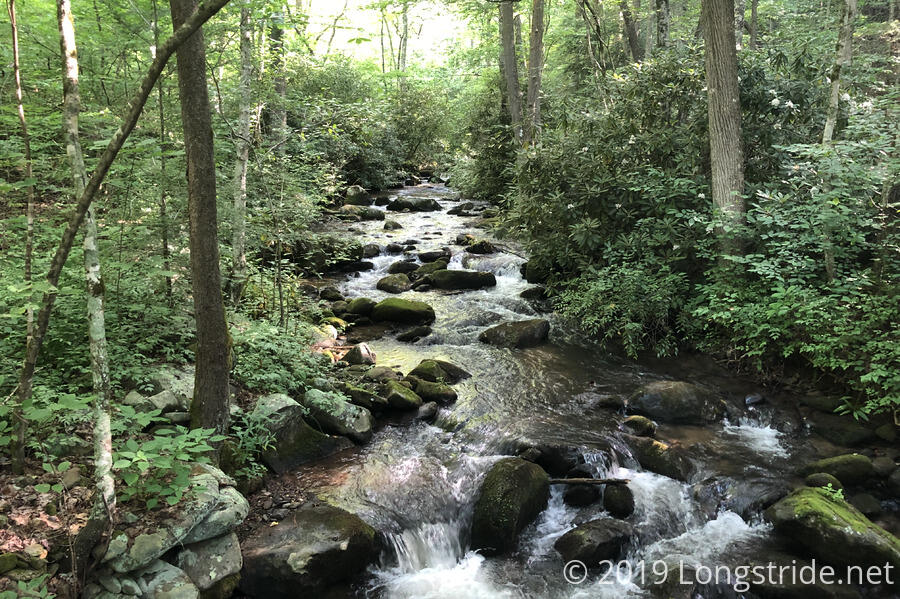 Our first break, after five and a half miles, was at a bend in the trail with a large flat area next to it; one could, with some effort, turn it into a nice campsite. A nice breeze blew, helping to cool us slightly after a short climb. While we were there, a guy with a large camo backpack hiked south past us while holding a map, with his pack’s oversized hip belts not fastened and dangling to the side.

Shortly after we continued, CareFree saw a bear down the hill running away from us, bringing us to three bears in three days in the Smokies.

There were also a lot of fallen trees that were annoying to climb over or under, including one where a tree below the trail had its roots gouge a hole out the trail, leaving only a small foot-wide and easily erodible path just above the trail to get around the hole.

At the end of the Lakeshore Trail, a 1,000 ft long “tunnel to nowhere” greeted us. What became the Lakeshore Trail was originally going to be a road, connected to Lake View Drive. Instead, the road ends shortly south (west) of the tunnel, which is barricaded on its north (east) end to prevent vehicular traffic. Towards one of the nearby parking areas, a fifty-foot high bridge carried cars to the tunnel. 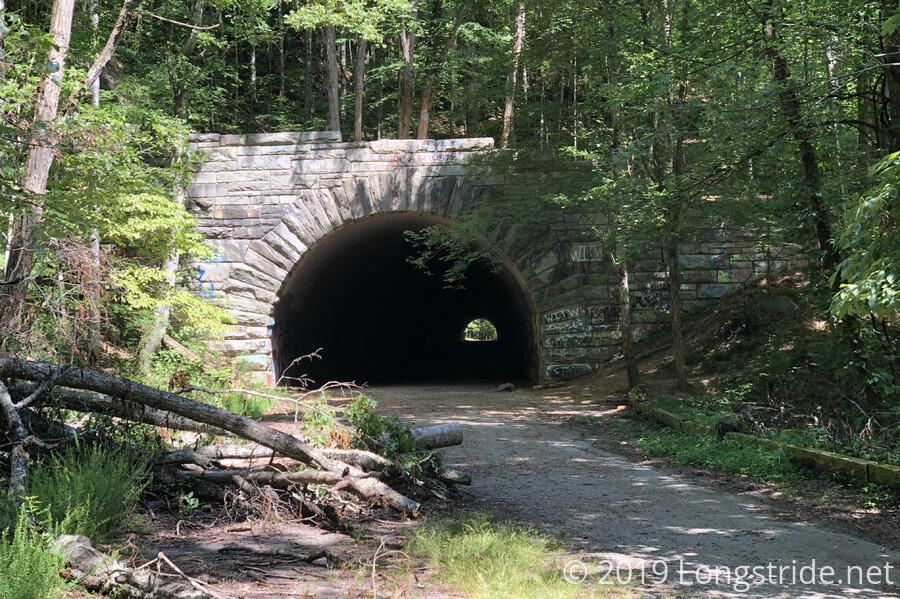 After crossing through the tunnel, we followed the paved road for less than a mile, during which five cars drove towards the tunnel. I guess it’s a popular sightseeing destination?

We turned off the road and began to follow the Noland Creek Trail, which also seemed to be an old road bed. The trail took us alongside its namesake, Noland Creek.

Only on the trail for about a mile and a half before we turned off to our campsite, we passed six horses and riders, and two large gatherings of butterflies. 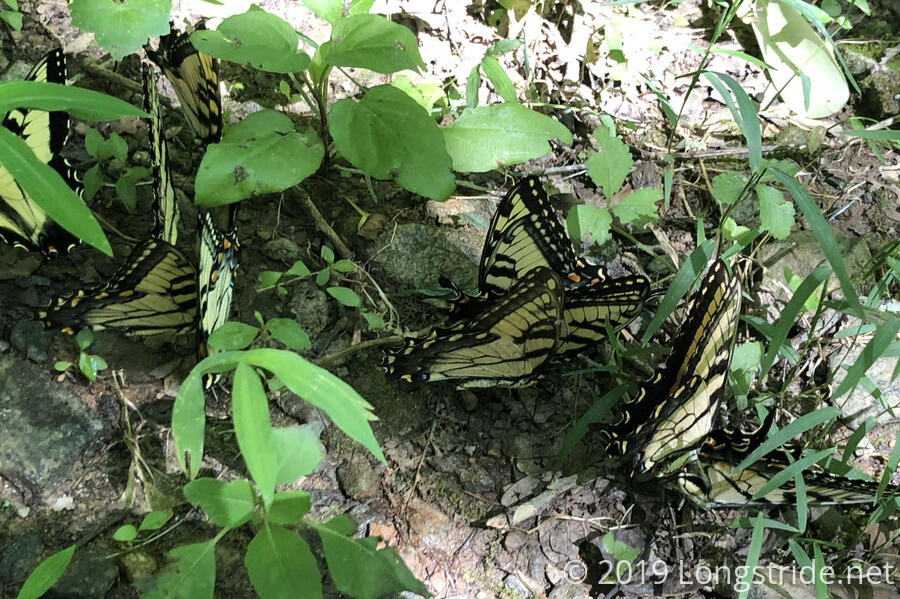 We reached our destination, the Bearpen Branch campsite, to find three tenting areas, each with a picnic table. The nicest spot (and the only one whose picnic table wasn’t overrun with moss) was already taken, though whomever set up their tent wasn’t around. A short while later, he returned. From the UK and living in Paris, he was in the Smokies to fish, and was just about to leave; he’d booked a campsite elsewhere tonight, but decided to leave the park, since it was getting so warm the fish weren’t biting.

We set up in the spot the angler vacated. It was nicely shaded, and a light breeze blew through. Clouds started to blow in, covering the sun and making it cooler.

Just before sunset, some thunder rumbled for five or ten minutes. Nothing came of it, though.

We got fairly lucky with ticks today. CareFree only found two ticks crawling on her this morning shortly after leaving camp. Tonight after dinner, I found one latched on my thigh that took more effort than usual to pull free. Hopefully, tomorrow will be an even better day and we won’t get any ticks at all!

Tomorrow will be our shortest and easiest day in the Smokies, just over 12 miles. After that, it’ll be quite a bit harder, though with eight pounds less food in my pack than when we entered the Smokies, it shouldn’t be too bad.