Low-key day today. For a number of reasons, Beast and I zeroed in Hot Springs. We got a really late start to the day (on account of breakfast with Beast's parents); Beast and I wanted to get the outfitter to look at our packs and advise what we might adjust to reduce the strain on our shoulders (moving the sternum straps on both our packs appear to help; the real test of that will be when we actually hike tomorrow); and my ankle, which while better and could probably have made the hike, was still sore and in need of more rest.

At the outfitter, I picked up an ankle brace, which I've been wearing all day. I'm not entirely sure if it's helped or not, but it certainly hasn't hurt, and my ankle, while still not 100%, is better than it was yesterday.

The Appalachian Trail runs right through the town of Hot Springs, and embedded into the sidewalk are metallic AT markers. 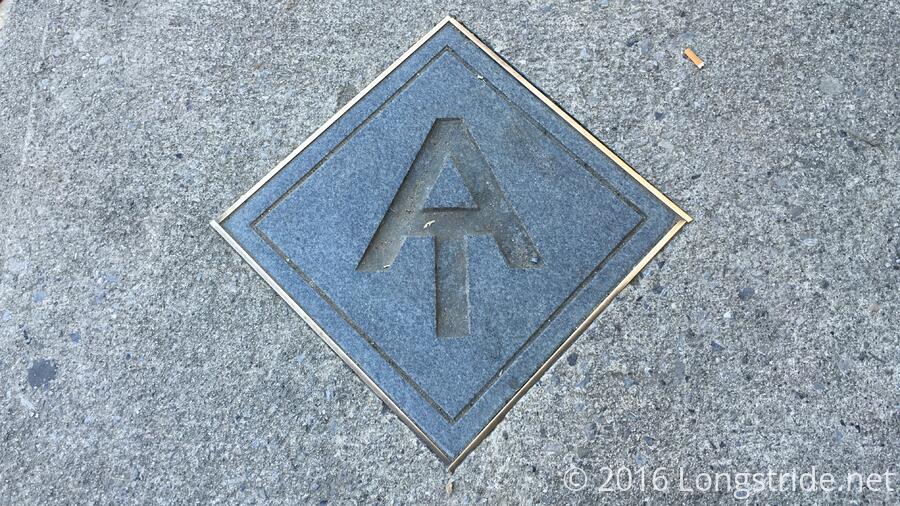 Beast and I wound up hanging out at the hostel for a bit, and after getting bored with that, walked back to town. We discovered a huge elevation relief map in an upstairs room of the outfitter, which covered large portions of Tennessee, North Carolina, and Virginia.

We eventually wound up back in the tavern, where between drinks, Beast put his CPA skills to work and helped a fellow hiker with their taxes. (Disclaimer: Beast is a CPA, but not your CPA.) We also saw a skateboarding bulldog named Tank.

Then, back at the hostel, we turned in a bit early so we could get out of town relatively early tomorrow, in an attempt to make it to the next shelter before everyone else in town. Hopefully that plan will go well. We still expect five days to Erwin, so we should be there on Friday.