Beast and I were pretty sluggish this morning, and even with breakfast at the hotel, did not manage to get out of the hotel until 11.

We got a shuttle to the trailhead, and got started hiking around 11:30. This already put into question our attempted destination, but we made no decision about that until later in the day.

The early part of day was not too difficult, though I managed to roll both of my ankles within ten minutes of each other while going through a particularly messy section of trail. At least there was a nice view at Wind Rock, which is where we should have attempted camping last night, rather than at the trailhead. 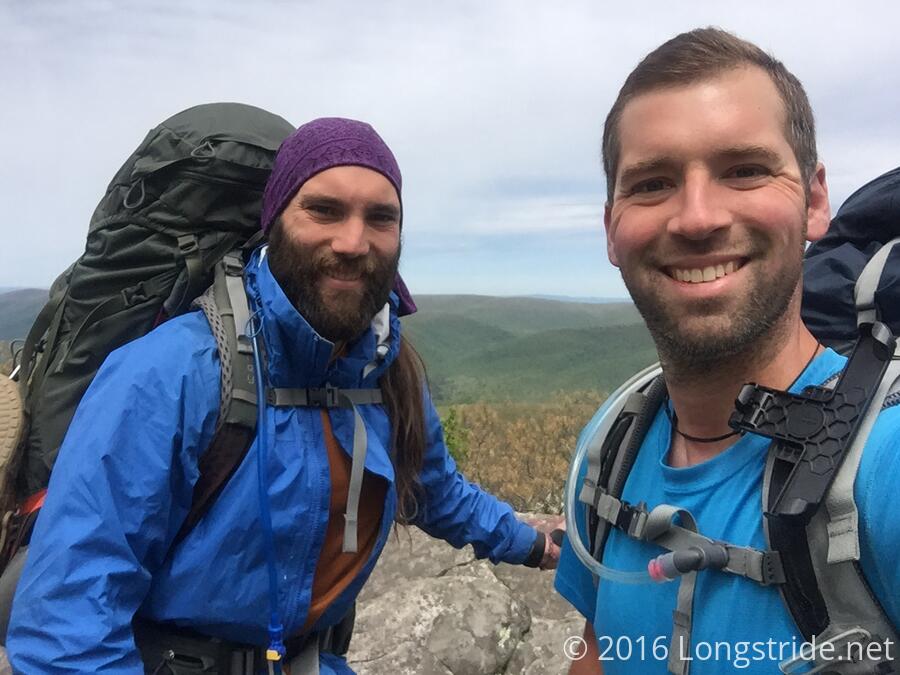 Longstride and Beast at Wind Rock

We stopped at the War Spur Shelter for lunch, and as we were leaving, Beast was mentioning to someone how between the two of us, he's usually fast on the uphills, and I'm faster on flats, downhills, rocks, basically everywhere else, and how it was a little frustrating that I had recently been faster on uphills as well. (I attributed that to his cold, foot and boot issues, and being off the trail an unexpected amount recently. But I guess I'm also faster now that I have my trail legs.)

But then, we got to the bottom of the hill, and as we were crossing the creek, he called out, "Ok, Longstride, show us how it's done". It was meant in jest, but my legs took it as a challenge. I charged up the uphill, a 1700 ft elevation gain over 2.5 miles, cruised along the mountaintop, and came down the relatively steep downhill (with barely no space on the sides of the trail to use poles, as the brush was very thick) at a slower than usual pace, arriving at the Laurel Creek shelter.

Beast arrived about ten minutes later. Of course, I had to say, "and that's how it's done". (He figured he'd pass me somewhere on the uphill, and frankly, I'm kind of surprised I was able to maintain the pace I was, but the trail was being very friendly, and I was largely able to maintain momentum once I got up to speed. The only hard part for that was the last mile or so up a steep, uneven, slightly rocky former road bed.)

Because of our late start, we got to Laurel Creek Shelter at 4:30. Because of the weather forecast of rain all day tomorrow, this made a push to the next shelter unrealistic, since we'd get there far too late to stay in the shelter.

The plan for tomorrow is an early start and 22.5 mile day to the Pickle Branch Shelter. While this was originally just a goal, we're now supposed to meet up with some of Beast's relatives, so we really need to make it there so we can have a not-terribly-long day to where we're supposed to meet them on Wednesday.