After breakfast (quiche leftovers), Beast's mom gave us a ride to where we left off yesterday, and we began our hike to the most photographed place on the trail, McAffe Knob. We started in fog, of course, since that seems to be the weather of choice these days, and began our ascent and the beginning of a long day of hiking.

The weather forecast was calling for rain and thunderstorms all day, and then over the last few days, gradually became marginally better; we expected that we'd be lucky to make it through most of the day without getting rained on, but that it would likely start thunderstorms just when we got to an exposed ridge and power lines late in the day.

The hike up to the knob was largely uneventful. We went past a ridge runner who was removing a fire circle that was not supposed to be there, and passed a thru-hiker or two before reaching the top.

McAffe Knob is a popular photo opportunity because the top features an easily photographed rock outcropping that juts out from the surrounding cliff, making for potentially dramatic scenes. When we got there, it was, of course, still foggy, which meant none of the surrounding scenery was visible. We still got some nice pictures, though. 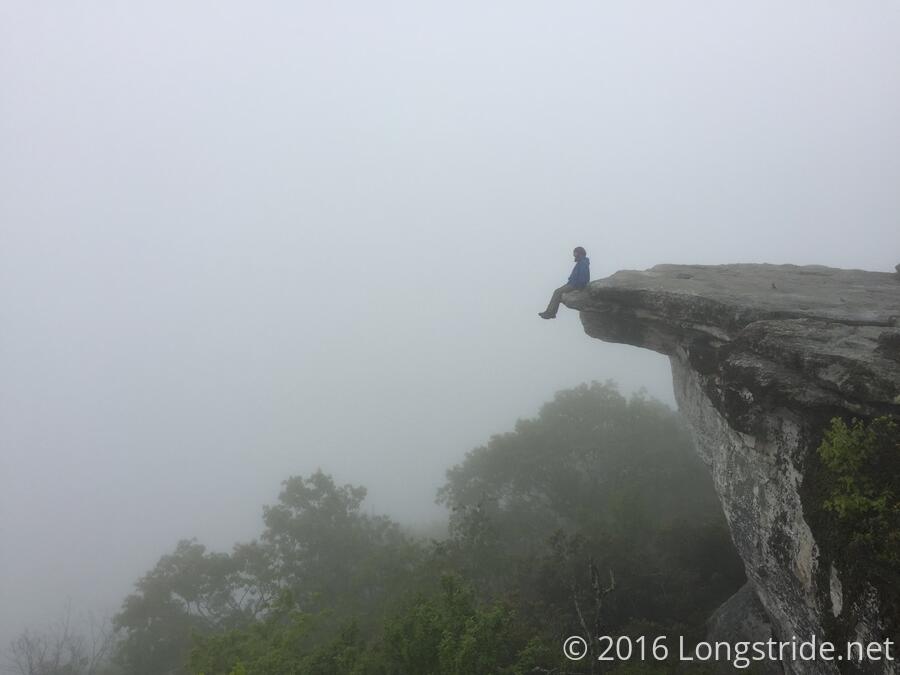 McAfee Knob — McAfee Knob is one of the most iconic locations on the Appalachian Trail. 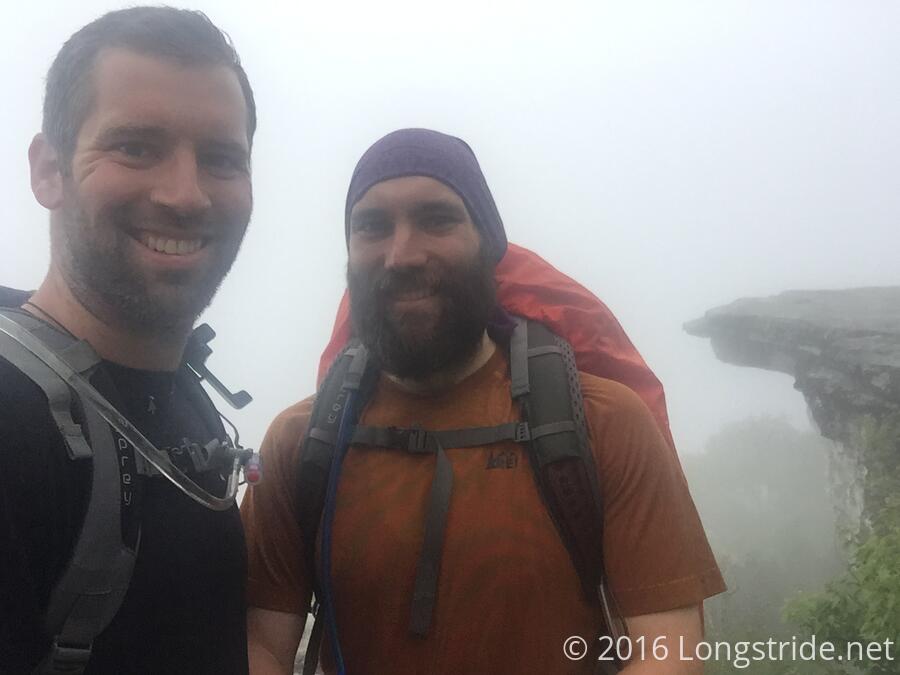 Beast and Longstride at McAfee Knob

After McAffe Knob, we went up Tinker Mountain, the next mountain over. On our way up, we stopped for a snack at the top of a hill. Beast noticed some bear droppings, and then some more, and then a whole lot more; it was as if we stumbled upon the site of a bear town hall. We kept a vigilant eye out while we quickly ate our snacks, and left as quickly as possible, nearly stepping on a significant amount of bear droppings on the trail. Clearly, these bears don't follow Leave No Trace principles. "Don't poop on the trail" comes to mind. (Ref: weeks ago when "fire guy" asked Beast if he pooped on the trail, I tried to lighten the mood afterwards by telling Beast I was going to go "poop on the trail" when I was going to take a piss. Since then, we've used "Don't poop on the trail" as just a funny thing to say.)

After another few miles, we reached the summit of Tinker Mountain. We had long been out of the cloud that covered McAffe Knob, and the surrounding landscape was visible. At the top, the trail follows the edge of the cliff, as if to force you to enjoy the view. McAffe Knob is visible from the Tinker cliffs, but naturally, the knob was still covered in fog. 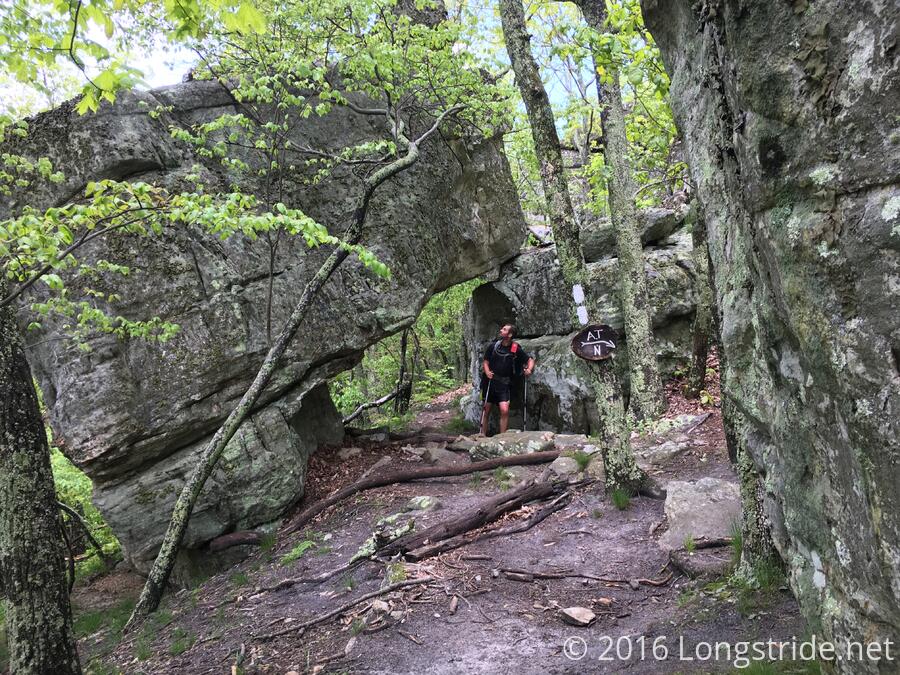 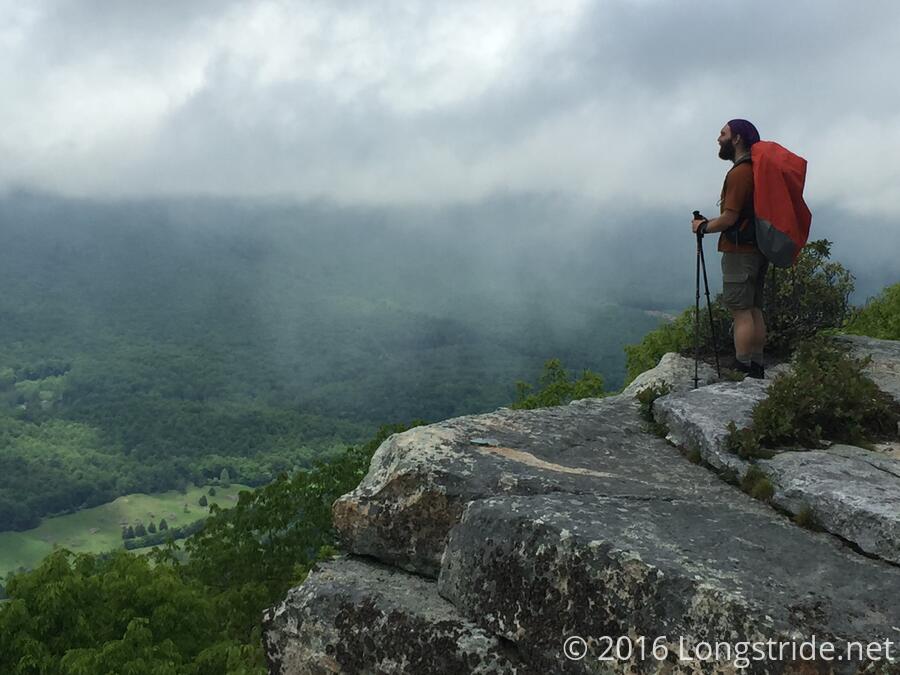 We took some time to enjoy the views from Tinker Cliffs, but we could see storm clouds starting to roll in, so we didn't linger too long, especially since we were only halfway through the day's hike.

We took the next several miles at an unsustainable pace, until I finally stopped us conveniently at a view, for another snack break. After a short while, we got back on the trail, and kept going.

Because of our late night, we were starting to get tired, which also tends to translate into sloppy, which is a bad thing when we're trying to go as fast as possible to try and avoid an oncoming storm. On the downhill after the view, I briefly took us off the trail, and quickly realized it. But trying to make up for "lost time" (all of 20 seconds, if even that much), once back on the trail, I slipped going down a rock because I didn't take the usual care I've been taking on rocks the past few days.

The fall wasn't that bad, really, except that I hit my left leg on the rock in the same place I had when I fell on the rocks several days ago. Fortunately, it only hurt; it didn't much further aggravate the injury I had been nursing the past two days.

Eventually, we made it to the power lines and the largely open ridge we needed to travel along before the last downhill of the day. As if on cue, there was a rumble of thunder (which I didn't hear, but Beast did) as we entered the first clearing with the power lines.

At the second power line crossing, we could clearly hear the hum and crackle of the lines, likely accentuated by the oncoming thunderstorm. From there, though, it was a short walk back into tree cover and the last downhill of the day. Once we were under cover, it didn't take long for the storm to finally catch up with us, and it started pouring. Just before the rain hit us, a deer ran by a few dozen feet from us, fleeing the approaching rain front.

We hiked as fast as we could through the rain, the trail quickly becoming a muddy river, and passed several other hikers in the process. We were probably poured on for a good 15 or 20 minutes, enough to completely soak all our clothes.

The rain stopped shortly before the trailhead, and we passed a set of railroad tracks with steam coming off of them. (We wanted to take a picture, but we were more concerned with finishing the day's hike than with photos at that point.)

Beast's mom picked us up, and Cynthia made us all a terrific spaghetti dinner.

After dinner, discussing tomorrow's somewhat ambitious hike out of town, we decided to take a zero here. It'd been over two weeks since my last zero, and the opportunity to have a relaxing day where we weren't rushed to pack everything up before leaving town (not to mention, a warm bed and good food) was too good to pass up.