The weather today was beautiful. Sunny, with no chance of rain. It was a bit warm, but there was a nice cool breeze constantly blowing throughout the day. It was a great day for a hike.

Beast and I left the shelter this morning around 8:15, planning to reach Bryant Ridge Shelter after about 21 miles. In a move that would turn out to be oddly prophetic, Beast started off by hiking down the trail to the shelter's water source. (I was about 30 seconds behind him, and would have assumed he was already far enough down the trail to be out of sight had I not seen him coming back up the water trail.)

I normally try to stop every five miles or so for a snack break; I've found that makes me a lot less tired and more clear-headed, especially later in the day. That's taken on a bit of extra urgency, since with the warmer temperatures, Beast is sweating even more than before, and really needs to take the opportunity to attempt to air out his shoes and socks so they can have some chance of being dry for a reasonable part of the day.

Early in the day, the trail began following the Blue Ridge Parkway, roughly paralleling (and crossing a few times) the road for about seven miles before the parkway veered off to the east. We should meet up with the Parkway again sometime tomorrow.

Following the Parkway gave us some scenic views when the trail crossed the road. To the west, there were a series of mountains that were wearing a cloud along their midsections, like a 20 mile wide tutu. 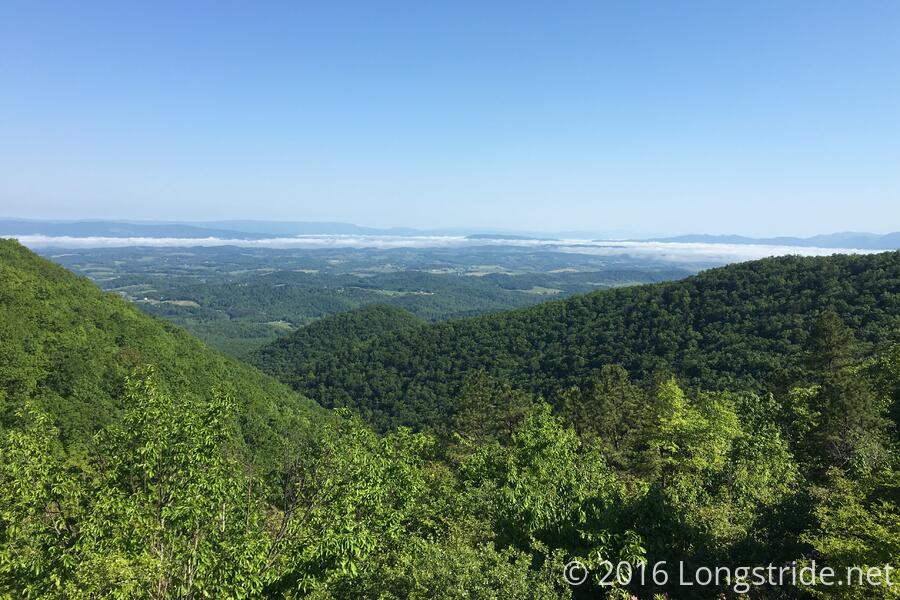 Although I've seen deer before on my hike, I had not actually seen deer from the trail. Today, we saw deer twice: first, there was a white-tailed deer ahead of me on the trail that took off running when it saw me; later, there were two deer standing to the side of the trail that I didn't even see until Beast pointed them out after they moved.

We stopped for lunch after about ten miles at a nice shaded creek near a road. Probably the second best water source of the day, we elected not to get water here (me, because I didn't need more, and didn't want to carry more weight; Beast because it was also fed by road runoff, which generally is pretty undesirable). We hung around a little longer than we usually would so Beast could attempt to dry his socks and shoes out, but it was clear that was only going to work so well. I decided to take my shirt off and let it dry off as well (it didn't, really, but at least I dried off), but in a first, I found myself standing shirtless by the side of a road, just waiting.

Beast ran out of water shortly before second shelter of the day, which has no water, and about five or six miles to a major water source, Jennings Creek. In addition to his already soaked shoes squishing with water with every step, this made for a very uncomfortable hike for Beast.

Adding insult to injury, a nasty biting fly began attacking beast over the course of half a mile or so, attracted by the copious quantity of sweat. Onlooking, it was really kind of comical, but also sad and painful, to watch Beast take his frustration out on the fly, yelling, swerving around the trail, and flailing wildly, even at one point grabbing a small tree and trying to swat the bug by hitting himself with the branches.

We remedied the situation with some bug spray, which Beast fully expected to sweat off in ten minutes, but it seemed to work well enough until we got to Jennings Creek.

On our way to the creek, about half a mile earlier, we passed a small mountain stream. I was kind of surprised Beast didn't want to stop and get water there, but the creek was also at a road crossing, and due to dehydration, he was physically and mentally exhausted and needed to get somewhere where he could just stop. He was done for the day.

I got Beast water from the creek, which he drank just about as fast as it would filter, and then sat down for my own overdue snack. Meanwhile, Beast's Spot device began to malfunction, refusing to shut off after sending the non-emergency distress message, possibly causing it to be sent multiple times. It was already acting somewhat spotty before, so this was its last straw.

Beast arranged, via his parents, for Cynthia and Philip to pick us up from the parking area we stopped at, about 3.8 miles short of our goal for the day (but still, we went a respectable 17 miles). But, this, along with a shelter closure due to bear activity will force us to adjust our plan for tomorrow (the first time bear activity has done so). Probably, we will go 21 to the Marble Spring campsite, with a fallback about four miles earlier at the Harrison Ground Spring campsite.