The day's plan being a relatively short 14.5 miles to the Eckville Shelter, I wasn't too much in a hurry this morning, and didn't make it down to the 7 am continental breakfast until almost 7:15. By that point, One Feather had already finished and was on his way out, planning to take a nearly 3 mile local bike path back to where it intersects with the AT, just south of Port Clinton.

I, on the other hand, wasn't keen on walking an extra three miles and re-doing a section of the trail I had already done, so I opted for a shuttle of some sort. Conveniently, the hotel had a short list of trail angels who could give rides, and the second one I called agreed to pick me up and take me to the trailhead I got off at yesterday.

Joining me in the shuttle was Torch, a new young (19, I think) hiker I've seen the last few days, who hikes with one pole and walks with just a hint of a limp. He's doing a flip-flop, starting from Harpers Ferry just a few weeks ago, and will return there to go south to Springer after reaching Katahdin. After a short wait, our driver/angel Phil arrived, and we were off to the trail.

The day started off with a steep climb uphill, and Torch and I practically charged up the mountain, making excellent time. We caught up with One Feather towards the end of his snack break at the entrance to the park containing the Hamburg Reservoir and Windsor Furnace. One Feather chatted with us for a bit before continuing on, and we followed several minutes later.

After another uphill, Torch and I reached Pulpit Rock, a scenic rock outcrop with quite a few locals enjoying the view. Torch stayed for a snack break, while I pushed on another three miles to The Pinnacle, another popular rock outcrop. On the way there, a family out hiking told me of a large rattlesnake just ahead on the trail, though by the time I got there, it was gone. 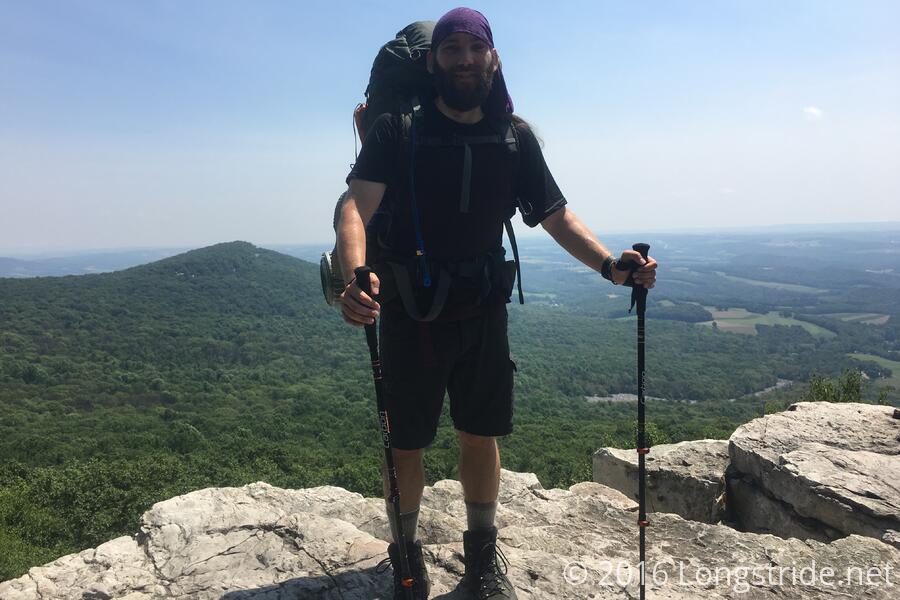 At the side trail to the Pinnacle, I passed a twenty-foot-high pile of small rocks. I mused that this must be where they store replacement rocks to dump on the trail when it's not rocky enough.

When I reached the Pinnacle, another day hiker saw (from easily 50 feet away) a rattlesnake in a crevice several feet below where I had just walked. I sought out an outcropping a good distance from where that snake was apparently seen (I sensibly didn't go back over to confirm), and took a snack break there, joining a local out on a day hike. (She indicated that one of the side trails that joins the AT nearby was one of her favorite trails to hike.)

Back on the trail, after a few more miles, I ran into Torch again, who expressed surprise that he passed me. It was also at this time when the path the trail took today first became clear: the trail went roughly east to the Pinnacle, and then back west most of the way around the mountain, before turning north. In effect, we followed the ridgeline almost entirely around the mountain, giving a somewhat short distance between start and end compared to the actual miles hiked. Every so often I complain that the trail should go to more scenic places, rather than them being on side trails. This is what happens when the trail listens.

View from The Pinnacle

We continued on to the Eckville Shelter, which was a short distance down a road, and somewhat poorly signed from the trailhead. When we got there, One Feather, who had gotten there ahead of us, told us there was trail magic on the trail just north of the road. (He knew of it because he didn't know to turn down the road to the shelter since there was no sign, and kept going; other hikers at the trail magic pointed him to the shelter.)

Torch and I trudged back up the hill (though without our packs, it was not a difficult climb) and found the trail magic, a pair of coolers with beer and several kinds of fruit. A note on the coolers identified our benefactor as Baboon (AT 2011). I took the last of the still-cold beer (not an issue since Torch doesn't like beer), and we returned to the shelter.

The Eckville Shelter is a small bunkhouse adjacent to a caretaker's house. A large privy, including a flush toilet and solar shower sits in the property's side yard, and a water tap and power outlet was available on the corner of the caretaker's house. 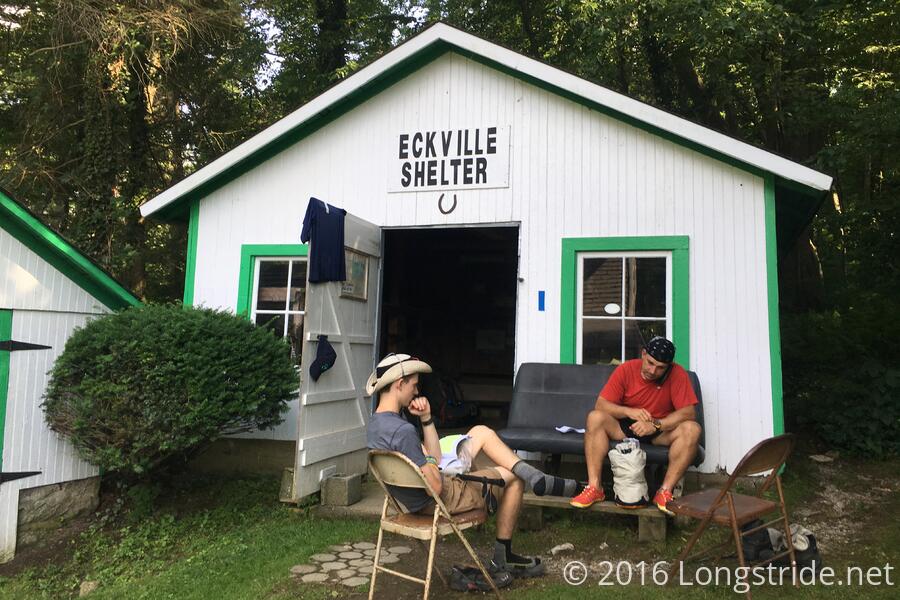 Being right next to the road, I immediately thought of the 501 Shelter, and got a craving for pizza. Unfortunately, after calling all the nearby pizza places, I was saddened to learn that none of them delivered to the shelter. Mac & Cheese and Ramen it is, again.

The bunkhouse, though small, was still nice. It has two doors (the back leading into the woods, for simple bathroom needs). The bunks had some sort of rug or foam pad on the wooden platforms, making them substantially softer than they'd otherwise have been. The shelter also had the largest logbook of any shelter I've been at so far. Only about two-thirds full, it stretched back to July 2012.

The only major downside was that it seemed motorcyclists enjoyed the road the shelter was next to, and there was constant motorcycle traffic throughout the evening.

The curiosity of the evening was a large white moth with black circles on its wings. It perched itself on the concrete steps leading to the back door, and stayed still despite One Feather and myself getting pretty close to take pictures. 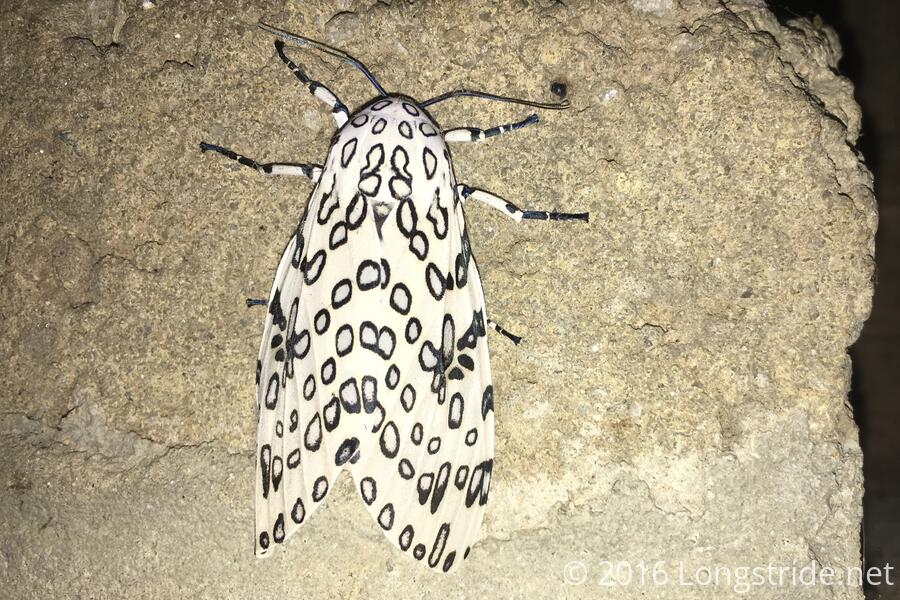