With a 17 mile day planned to Bake Oven Knob Shelter, I managed to leave the shelter shortly before 7. Yesterday, One Feather had taken to calling the shelter "Easy Bake Oven Knob" (after the children's toy). With that in mind, I was almost immediately and rudely greeted with a rough, rocky trail. Being a bit cheeky, at the first shelter I passed (the Allentown Hiking Club Shelter, after about 7.5 miles), I wrote in the log,

"Clearly, this section of trail is maintained by the same people as maintain PA's roads."

which was met with some agreement by Hammer and Fob, both taking breaks there. 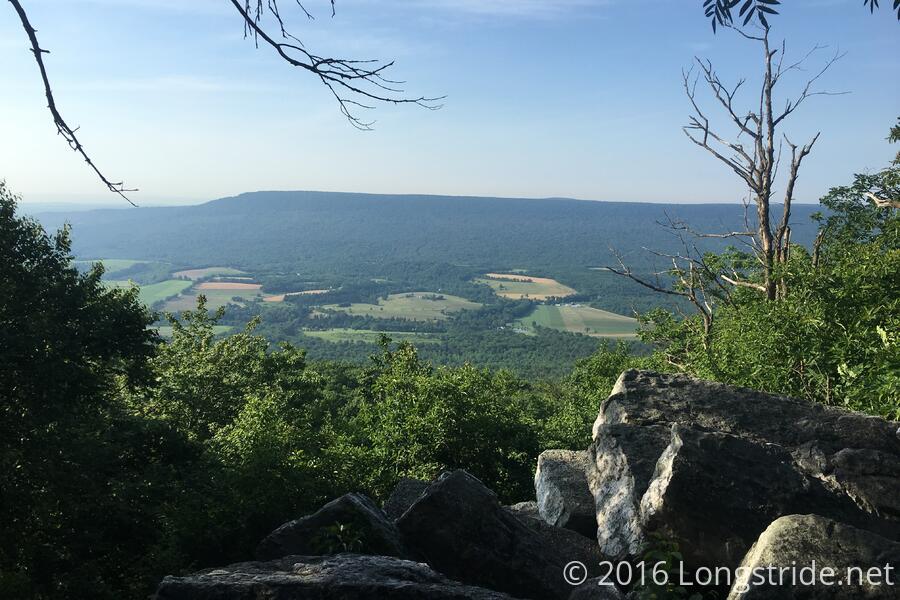 I should have known better than to write that in the log; the trail heard, and brought punishment. Immediately after leaving the shelter, the rocks all but disappeared, and the trail became much easier, and I was able to fly down the trail for many miles. The weather forecast called for rain; I thought I just might make it to the shelter before the rain started at the rate I was going.

The trail had otherwise in mind.

Almost out of nowhere, as random raindrops heralded the approaching rainstorm, the trail abruptly turned into a rock scramble called "Knife Edge". The name describes it accurately: rocks, with a sharp drop-off on both sides. My speed slowed to a crawl, but I made it safely across, right before the rain started, and just in time to go through another very rocky section called "Bear Rocks". 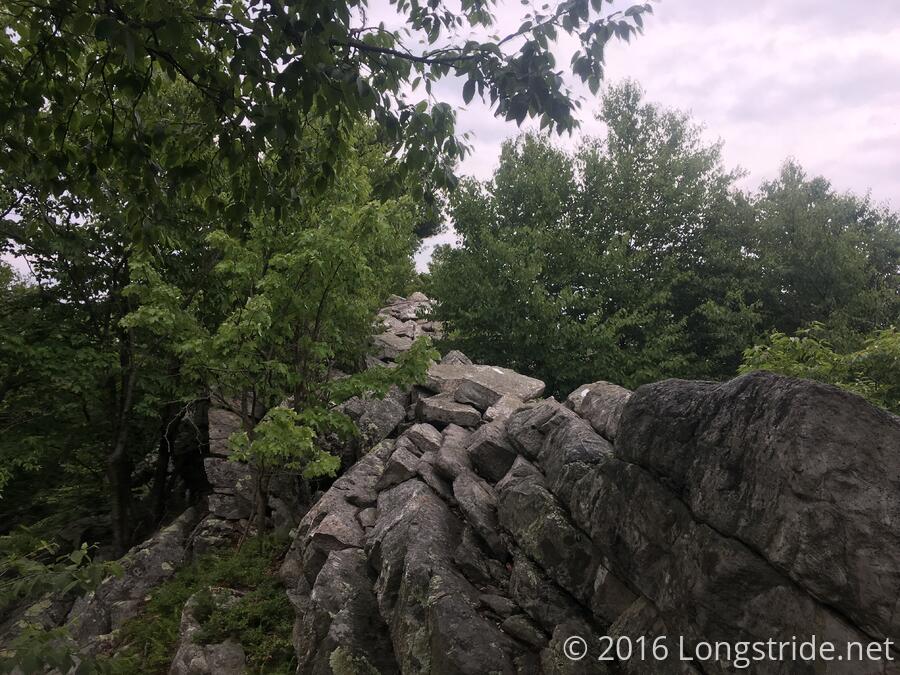 I pushed on for a bit more, but tired from the rock scramble, and hungry from being overdue for my third snack of the day, I stopped at a campsite and ate my snack, hoping the rain would stop soon. It didn't.

After a bit, the trail eased up on the rocks, and I was able to make easier progress, until a third rock scramble appeared, the path from the top of Bake Oven Knob to the shelter. This scramble was particularly infuriating, partially because I had already dealt with two others just a short while earlier, and also because it actually involved substantial elevation change, down the mountain. Also, the rocks were all wet and slippery. Not fun. if there was any part of my pants that were dry, climbing and sliding down the rocks took care of it.

I finally made it to the shelter around 4, completely soaking wet from the rain and the third rock scramble. While I knew the water at the shelter was likely to be further away than I'd have liked (the guidebook said it was unreliable, but more reliable "further down"), I wasn't really prepared for the ordeal that getting water was there.

The shelter has three identified water sources, and the first two were dry. The trail to the three springs was steep, and after the second, poorly maintained. The trail wound down a hill, over one fallen tree, and through another very large fallen tree. (One Feather, who had gotten water earlier before some of the rain, was not aware of this second fallen tree; it seems likely that it had fell sometime in be last hour, between when he got water and when I got water.) At least, the water was flowing from a pipe rather quickly, and so was easy to get.

After carrying four liters of water back up the hill, I changed clothes. Rain was not in the forecast for tomorrow — at least, not before I should get to my planned shelter, 23.5 miles ahead — so I didn't expect to finish tomorrow with both sets of clothing completely soaked.

Also at the shelter tonight was Baboon, provider of yesterday's trail magic, and his mother. They were doing a few day section hike, ending tomorrow. Baboon has completed the triple crown; besides the AT in 2011, he's also completed the PCT and CDT. He regaled us with stories of adversity and amazing trail magic from his PCT thru-hike.

Having extra food for their hike, Baboon's mom gave me a packet of tuna. I'd seen them previously, but hadn't actually bothered to consider getting them. But after mixing the tuna into my mac & cheese, which made it taste awesome, I may have to seek them out.

According to the shelter logs, the shelter has a porcupine, who is highly territorial of the shelf on the outside of the shelter, and has been seen dragging things off the shelf. I hope we don't see it tonight.