While I was only planning a 14 mile day to the Morgan Stewart Shelter, I wanted to leave early to beat the heat. Naturally, I slept in a bit, and didn't get started hiking until about 8:20.

After five miles, around 11:45, I arrived at the RPH (Ralph's Peak Hiker) Shelter. The shelter is very nice; although enclosed on three sides like most shelters, it has a front door, and a hole in the back where a wall or large door once was. There's also a water pump right next to the shelter, so you don't have to go anywhere to get water. (Still need to filter it, though.) There's a privy that's par for the course, two picnic tables, six plastic chairs, and a large grassy camping area. Overall, it's a nice shelter.

I stopped at RPH for my break, and tried to order pizza. Unfortunately the pizza place only delivers after 4:30 pm. It was hot out, and I didn't really want to leave, so I procrastinated leaving for a while, but eventually finished my snack and after a nearly hour long break, left the shelter around 12:40. I made it about a tenth of a mile down the trail, past the road crossing, and a tiny bit up the hill, before I decided I was done hiking for the day. The heat was a convenient excuse, but I also didn't really sleep well at the state park, so I didn't have the mental energy to push forward. 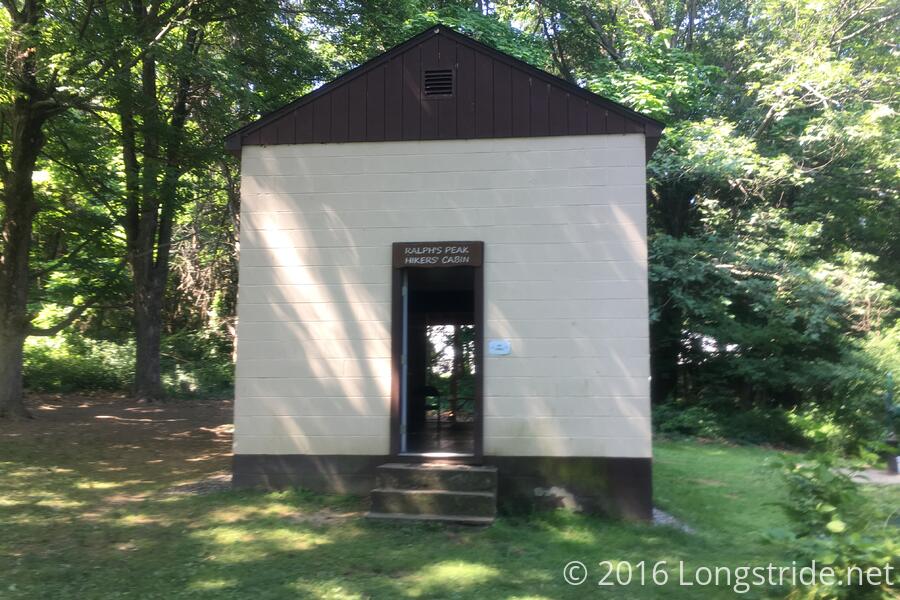 I ordered Chinese food, and chatted a bit with Frodo and Tank, who had also camped at Hemlock Springs two nights ago, and stealth camped on the beach at the park yesterday. (They waited for the concession stand to open this morning before leaving.)

My food was quoted as taking 45 minutes to arrive, but got to the shelter early, after about half an hour. I ate the entire order of sesame chicken and rice I ordered, something I'm not usually able to do at home. I also got a two liter bottle of coke.

While I was eating, an older hiker, Blood Man, arrived. I shared some of my soda with him (figuring it was probably not prudent to drink the entire bottle myself). As a result, he offered to trade a bag of venison jerky he had dehydrated before he started for a refill of his small water bottle with more coke. This seemed like a good trade to me, so I accepted.

As the day progressed more people came through; some stayed, some pushed on. Jersey, Boston, and Scott, the three hikers who were at the trailhead where Penny dropped me off two days ago, arrived to tent, and we chatted for a bit. (Penny had driven down to the parking area by the lake where she picked me up and was looking at the lake, and talked with them once they made it there. They had thought Penny was my mom, and Penny had told them about the pie bet.)

As the evening wore on, I ordered a pizza (appropriately sized, this time), and actually managed to eat most of it.

We had visits from two of the shelter maintainers. Bill (who has thru-hiked the trail) arrived briefly earlier in the day to take the trash out. Tim (who also hiked the trail in the 80s) came in the evening, and chatted with us for over an hour. Apparently, the local residents don't really like the shelter, but as long as it stays in good repair the park service allows for the shelter to remain. Last weekend, the maintaining group did some major repair work, putting on a new roof and doing a considerable amount of trail maintenance nearby.

The weather forecast for tomorrow is calling for a high of 90, so I'm wanting to leave early. Let's see how well that works out...