With an 18 mile day planned to the campsite at the Clarence Fahnestock State Park, and a hot day forecast, I wanted to leave early enough to get to the park's concession stand for dinner before it closed. Early, today, apparently was 7:30.

I took my first break of the day at the first major road crossing, about 3.5 miles from my campsite, at the Appalachian Deli. It's not often there's a deli right on the trail, so naturally, I had to stop and partake. The pancakes, eggs, and bacon I had were excellent. I also grabbed a soda and Powerade for later in the day.

While I was at the deli, Torch showed up. We passed each other a couple of times later on, before he pulled ahead and left me behind. I was going a bit slower than usual since I had extra weight (the soda and Powerade), and Torch was attempting to do 25 miles to the RPH Shelter, a shelter near a road that one can have pizza and Chinese food delivered to. (I would love to stay at that shelter, but it doesn't make sense since it's only about five miles past where I'm staying tonight.)

Aside from a few steep hills, the trail was nice and actually somewhat easy today. There were a few places where it was a little rocky, but really nothing that was too bad. 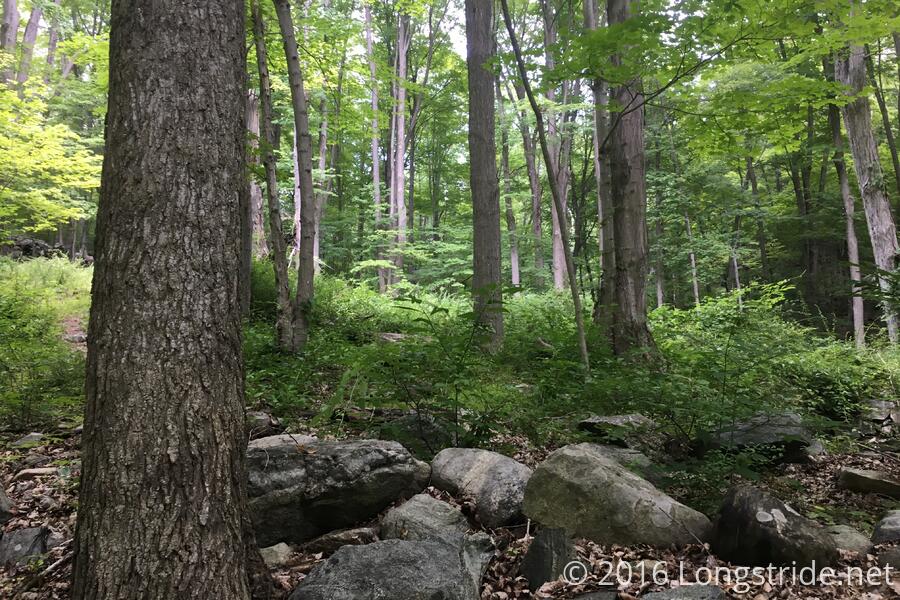 During my third break, a few miles before the Fahnestock Park, a section hiker traveling with a day hiker mentioned the concession stand, though was confused as to whether it closed at 3 or 5. As it was already after 3, it would be unfortunate if that's when the stand closed. I was still several miles away, though, so even if it closed at 5, it would be hard to get there before it closed.

Eventually, I made it close to the entrance to the park, where there was a sign advertising the concession stand, but which stated the grill closed at 4. It was already essentially closed, and even if it wasn't, by that point, I wouldn't have gotten to the stand by 5 anyway.

That makes me zero-for-two for concession stands in two days. Quite annoying.

I eventually made it to the side trail to the lake beach which led to the concession stand and campsites, but there were no actual signs to the campsites. Now after 6, the beach was all but deserted, and there were no staff in sight. I found and used the restrooms, and then saw movement through the window to the first aid office, so I went in (surprising two lifeguards in the process), and was able to get directions to the campsites. (Neither lifeguard had actually been to the campsites, though, so they couldn't tell me anything about them.)

The side trail to the beach was about 0.2 miles down somewhat rugged terrain; the campsites were almost another mile past that, a walk down the sidewalk-less road to exit the park, across a major road, and up a hill on another sidewalk-less road. Upon arriving, I learned that, despite the guidebook saying water was available, there was no drinking water actually available at the campsite, since it was more geared to RVs and car camping; the free sites available to AT hikers were clearly an afterthought.

Water was available, though, from a tap at the park office, a walk back out to, and along, the main road. Nuts. More walking needed for today, and it was already late enough as it was.

There were three AT campsites to choose from. The first was occupied; the second had an obscure entrance I didn't bother to try and find, leaving me with the third site. It was pretty lousy. The ground where you'd put a tent was a bit rocky, there were small shards of glass everywhere, and it was near a busy road, so it was quite easy to hear cars. This was the only available place, though, so I set up my tent.

On my way out to collect water from the park office, a hiker from the first campsite stopped an RV that was leaving, asking if they'd share some water with him so he wouldn't have to walk to the office. The couple in the RV were kind enough to give him a gallon jug of water, and me a 2 liter jug of water, explaining that they don't like to drink water from their RV's water tanks, so they carry bottles of water to use instead.

With sufficient water collected, I was able to cook dinner. My clothes were very slowly drying out, but there was really nothing I could do about that, except hope it would not be so hot tomorrow. (Weather Forecast: hot)