I left my campsite at 7:30, and I could tell immediately it was not going to be a great day for a hike. There continued to be rocky, slow terrain, and though the sun was hidden behind clouds, it was still hot and humid. And, shortly after I left camp, it started to drizzle.

At the next road crossing (Orange Turnpike) about a mile from where I started, there was water and fruit trail magic courtesy of trail angel Headley. I had a banana, and drank and refilled my water bottle. (Thanks, Headley!)

At the next road crossing (NY 17), a little under two miles away, were numerous water jugs, courtesy of The Hikeman and Susan. (Thanks!) Here, I needed to figure out where and when I should have Penny pick me up. I looked in the guide and at maps to check the location of various road crossings, and settled on what would be a short 8.3 mile day to the Arden Valley Rd trailhead near Lake Tiorati in Harriman State Park. I figured I'd be able to make the remaining 5.5 miles in 5 hours. A glacial pace, but it was only slightly pessimistic given what I'd been doing recently. I called Penny, and let her know I'd be there at 2 pm.

The trail followed Arden Valley Rd info Harriman State Park for a short while, before veering off into the woods before reemerging into a parking lot, and then going up a somewhat steep hill. On the other side of the hill, I stopped for a break. 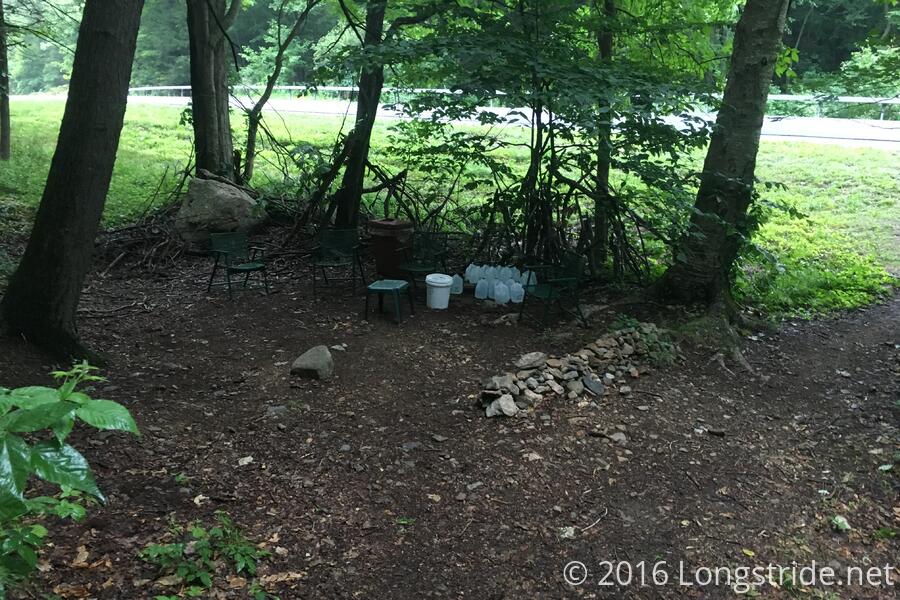 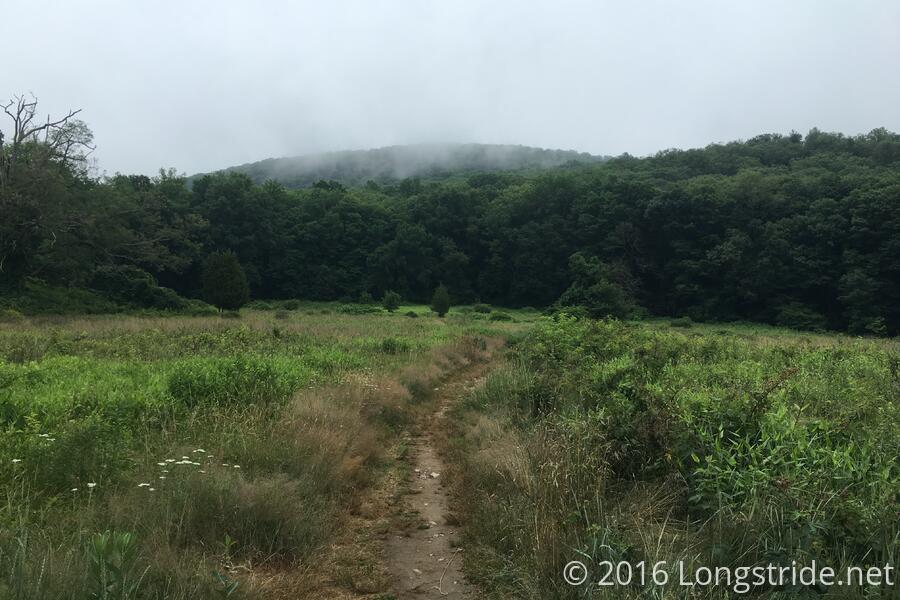 The rock scramble of the day was the "Lemon Squeezer". If features a crevice you need to climb up into, and then squeeze through. It's slightly less wide than a person, which makes for a tight tight fit, and you generally need to take your pack off and maneuver it as you shimmy through. Fortunately, though, a group of Boy Scouts were there, having already made the climb, and one of them offered to lift my pack up so I wouldn't have to maneuver it through. 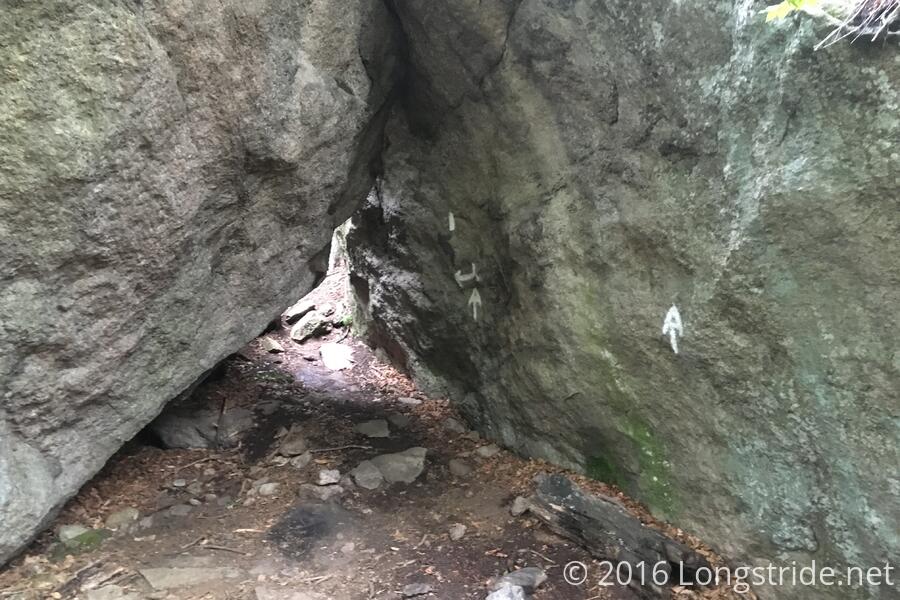 Once up to the top, the trail down the mountain was much easier, and I wound up getting to the trailhead an hour early. About 0.3 miles away from the trailhead was a set of facilities for Lake Tiorati, including the park office, cleverly situated at the center of a traffic circle, a restroom, shower, and vending machines, not to mention, a dozen picnic areas, all occupied, from which various luscious smells emanated.

From the vending machines, I got a soda and an ice cream sandwich (which would have been better any other day this week when I was melting; right then, it was actually a bit chilly).

I gave Penny a call to let her know to pick me up from the traffic circle, and while I was sitting there waiting, I had a nice chat with the park manager about the trail.

Penny arrived, with her friend Pam, and we drove to Penny's house in Darien, CT. Darien is a town on the Long Island Sound. I'm at a loss as to how to describe it, other than to say that it seems like any other town, but with a waterfront of private communities with big houses attached.

I got a shower, started my laundry, and with my still too large rain pants and a faux-Hawaiian shirt Penny loaned me that had been hanging in the closet for years (it apparently belonged to a former occupant of the house, and a lot of his clothes are still in the closet), she dropped me off at Walmart while she went to pick up lobsters that were to be our dinner appetizer.

On the way back to the house, Penny took me on a tour of the nearby private community, Tokeneke. During our tour down narrow, windy streets lined mostly with large ritzy houses, Penny provided a running commentary, usually about how some house had been torn down and rebuilt like a McMansion, and how the older, stone buildings were more tasteful and elegant. (I'm sure she was right, too; the original houses would have been too small for modern sensibilities, though it is a shame the replacements didn't have better architectural styling so as to be legitimately interesting to look at.)

An interesting feature of the private community was that at every intersection, there was a sign indicating which homeowners (by name) were in which direction. Certainly, that's one way to make sure guests go to the right place, but it seems a bit weird to me.

Another interesting feature, and this was the case for all of Darien, was that every mailbox had the street number and the street name on them. This is kind of funny when there's ten mailboxes in a common area, and they all repeat the same street name.

After a further detour through a convent, we returned to the house. I hung up my tent in the garage, draping it over ladders and lawn chairs, to dry it out. (I was a bit dubious that this would work in a not-well-ventilated garage, but it has all night to air out, so I guess I'll find out in the morning.)

Joining us for lobster was a neighbor (whose name I forgot to write down, and which unfortunately escapes me at the moment), whose son had previously hiked the AT. She was hoping he could be here tonight, but he had to be at work. During the discussion, it came out that there had been a bet on the successful completion of my thru-hike between Penny and the neighbor; stakes were a pie. (I insisted that if I were to be the subject of a bet, I should also partake in the delicious winnings.)

The lobster was okay; I liked it, but wouldn't really go out of my way to seek it out, and it still registers as crab to me: too much work for too little food. (Though lobster being bigger, the work-food ratio is better placed.)

As it grew later, I started nervously glancing at my watch; with a nominal 10 pm bedtime, that was likely not going to happen if we were still to go out to a restaurant. And I still had to actually pack the food I had bought. (And I was being too polite to try and hurry things along.) Edwin, Penny's husband, noticed this, I think, and got us moving in the direction of the restaurant, Papa Joes, an Italian restaurant.

Back at the house after dinner, I came to terms with that leaving at a "reasonable" time in the morning would no longer be possible; I was basically on the verge of falling asleep, and I still had to pack. Penny offered that I could stay another night, and while I didn't really want to zero here, after taking three zeroes not even a week ago, there was a certain practicality to it. Conveniently, there was an REI in town, which I could use to replace my broken poles. And there was the prospect of kayaking on the Sound. And as hot as it had been lately, I was really not looking forward to more drenched hiking. So, I took Penny up on the offer. Unexpected zero, but it should be worth it.