I had been planning on getting up at 5:30 and leaving around 6:30, to get an early start, but I didn't actually wake up until 6:15, and didn't leave until almost 7:30. None of the rain that was forecast overnight fell, and today started off cool.

The morning started off continuing the climb up Bear Mountain, which led to a monument at the highest point in Connecticut, 2354 ft. Afterwards, there were some steep rocks down, as the trail led to Sages Ravine and the Connecticut/Massachusetts border. The end of Connecticut means the completion of ten states on the AT. There's only four more to go. 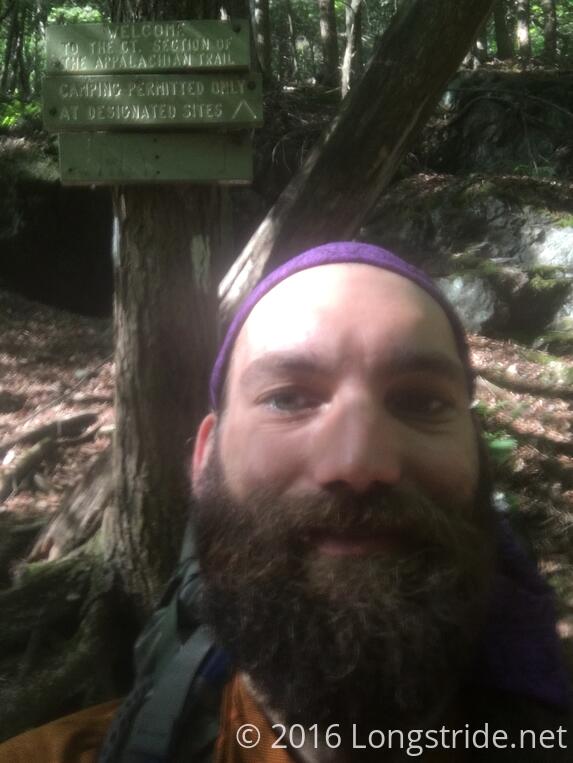 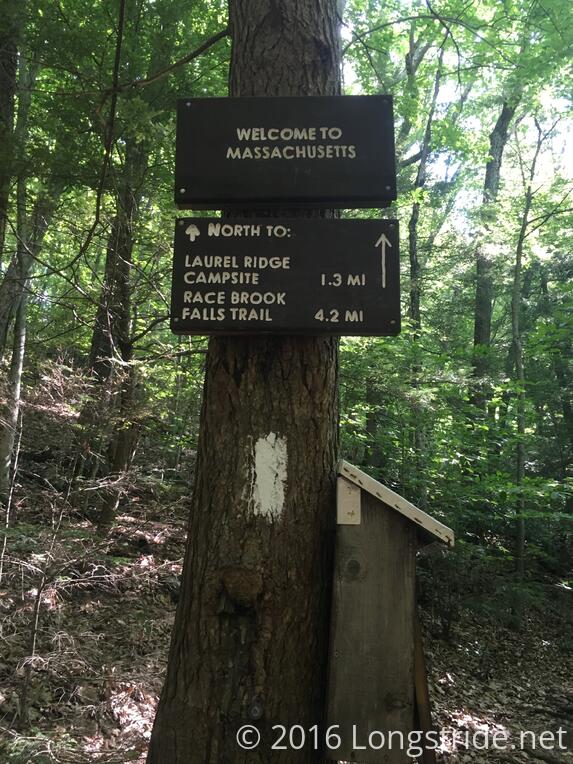 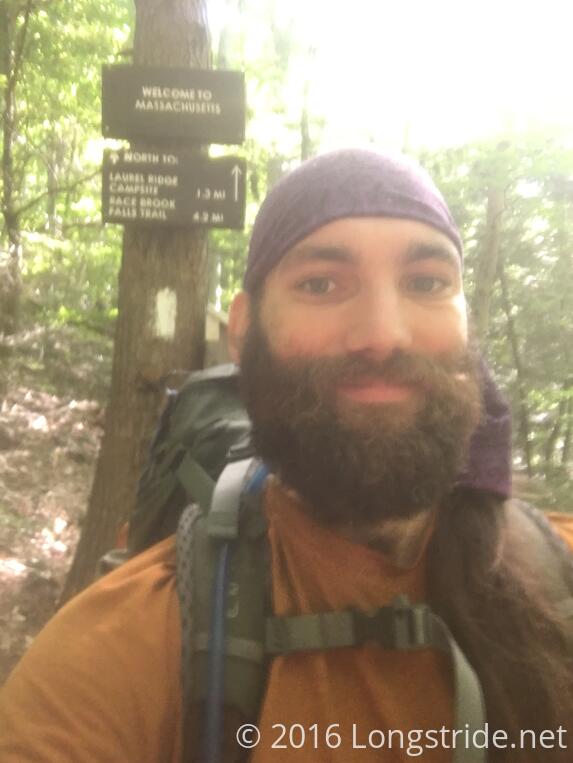 Massachusetts lead off with the trail following a stream with swimming holes, which looked nice, before climbing up Mt. Race. I took my first break after five miles, most of the way up the mountain at an overlook.

The trail from there followed the exposed ridge, and provided an absolutely beautiful view of the valley below, possibly my favorite to date. 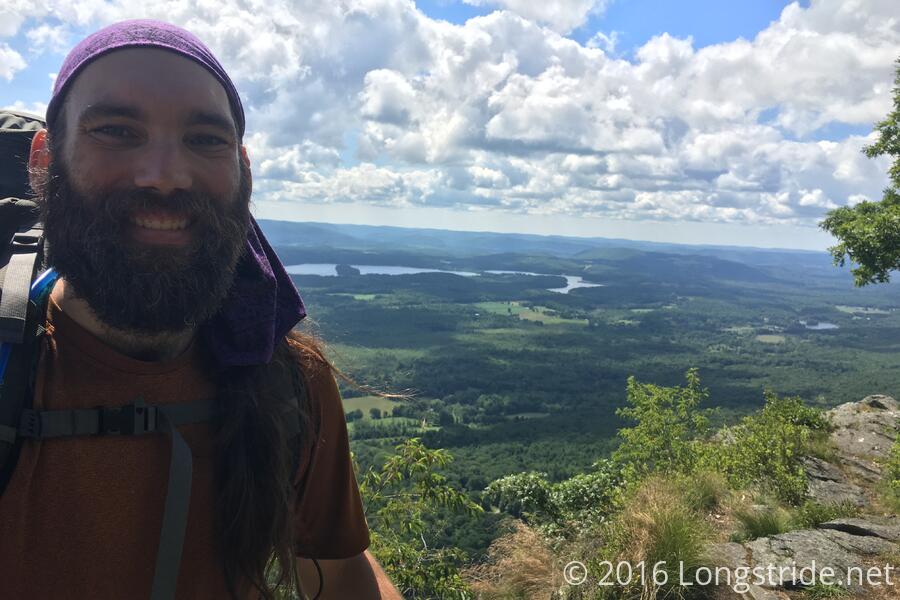 A little further on, while climbing Mt. Everett, I came across AMC (Appalachian Mountain Club) volunteers putting in rebar and wood steps into a particularly steep rock face. Disappointingly, they left it in a somewhat unsafe state while they prepared for drilling the rock to install the rebar. They had placed the wood steps on the rock where they planned to put the rebar, but they did not actually secure the wood or put a warning that it was not ready for use, and then regrouped at the top of the rock. Thus, when I tried to use the first two steps, I knocked the wood out of place. Fortunately, I saw them at the top, and was suspicious of the steps since they looked too new, so I didn't actually fall; they just were in the way of the most expedient path up the rock face.

On the other side of Mt. Everett, at a parking area, there were three sets of trail magic: a local provided several large containers of water (probably in the neighborhood of 20 or 30 gallons of water); another provided a (now empty) cache of snacks, and trail angel Rob Byrd, from Tennessee, had sodas and snacks. Rob had a large white van, with Casper on the side at “The AT Friendly Van” printed underneath. This was how I recognized that I got trail magic from him back in April. (Now, he was in town visiting relatives.) 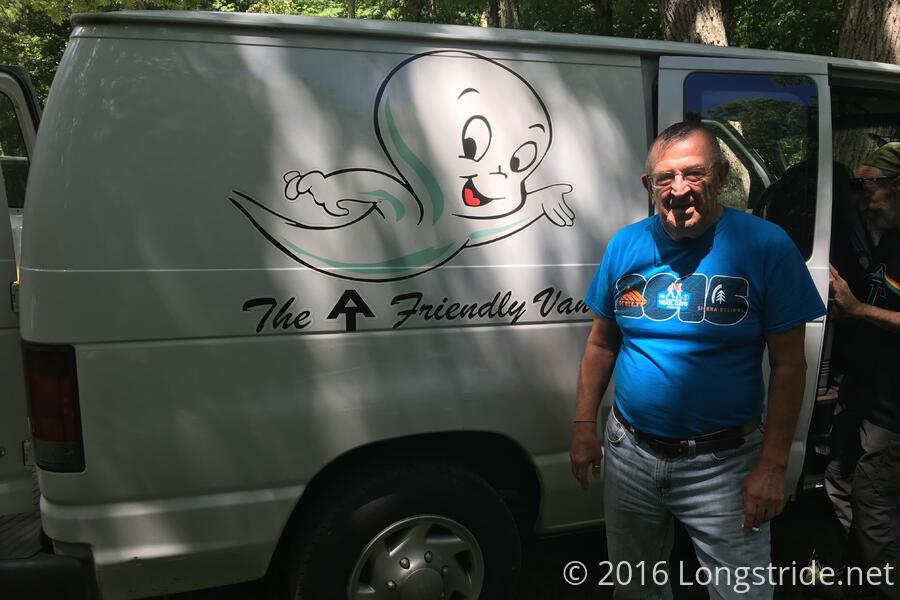 Using the trail magic as a boost, I took my second break at ten miles, at a view on Mount Bushnell. So far today, the weather has been great, with a cool breeze blowing all day.

While there, SEGA passed me, and as I was leaving, Moxie and Sunshine (two park rangers from Acadia, whom I've seen several times in the past; first in the Smokies) arrived, and we hiked together to the next road crossing, climbing down the steep and rocky Jug End. They had asked about Beast: specifically, they had been ahead of me for awhile, and when they saw that I had passed them, they said they had to catch up to me to ask about him.

I was glad to have run into them when I did. They were hiking behind me, and the little push their presence gave me helped me to not overthink the rocky descent and get me moving faster; I probably hiked down Jug End twice as fast as if I had been on my own.

At 3 pm, at Jug End Rd, I notified Jess Treat (the owner of the hostel I'm staying at tonight) of my location, and estimated being at US 7 between 5 and 5:30. The next 4.5 miles of trail to the road then managed to be some of the easiest anywhere, and I wound up getting there at 4:30!

She picked me up, and two other hikers who did a SOBO slack to the next road crossing north, and we went to the hostel. I grabbed a shower while Jess started my laundry, and pondered a slackpack plan for tomorrow, and what that would mean for supplies.

I grabbed dinner at the Marketplace Cafe, a short walk away. On the way there, I passed a church with an arbor with "Come to me all that travail & are heavy laden, and I will refresh you" engraved. I was tempted to return to the hostel, get my pack, and ask them for a soda, but decided that might not go over well.

After dinner (two cheeseburgers), I decided to go ahead with slackpacking tomorrow. That, plus places on the trail (or nearby) as the trail goes through towns the next few days should allow me to make it to North Adams before I need to stop for a full resupply.