Papa Monkey dropped Rainbow and myself off at the laundromat in Vernon, while he attended to some personal business. After he was finished, we went to the Vernon Diner, before beginning the process of heading back to the trail. 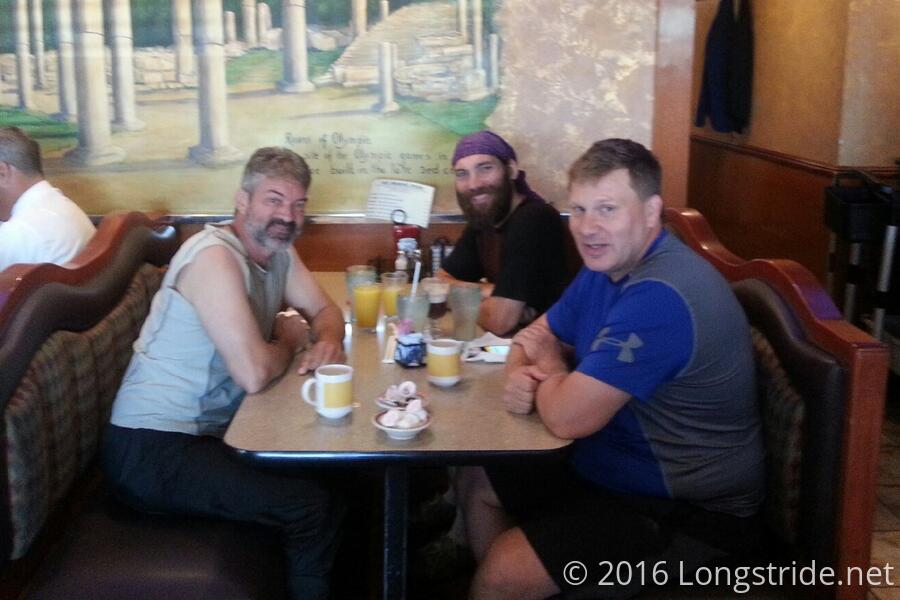 We made a stop at an REI, where I exchanged my fuel canister recycling tool for another that wasn't obviously detective, bought a new trowel, and got an extra fuel canister. I also replaced my boots, taking advantage of REI's one year warranty. Pennsylvania shredded the heck out of my boots, and while they weren't quite as worn down as my first pair at this point, they were well on their way to boot heaven.

We stopped by a Walmart for food resupply, and I picked up six days worth of food, and about 100 miles worth of snacks. Mostly. This Walmart was completely out of snickers bars. For shame.

There was originally a cooler in the car that was entirely too large, especially with another person's worth of stuff in the car. Earlier, we dropped it off at Papa Monkey's home (we didn't stay there because there were renovations currently in progress). Now, though, Papa Monkey and Rainbow wound up in a debate over whether to get another, smaller, cooler, and of what size. As the tiebreaker, I voted for the medium-sized cooler, figuring the small size would be too small, once ice is added to it.

For lunch, Papa Monkey treated us to Filipino food (his wife is from the Philippines), and we made a quick stop at another food store, where I got snickers bars and Papa Monkey picked up a prescription.

Continuing our trek back to the trail, we detoured to Holyoke, MA, where there is a small park with dinosaur footprints embedded in the rock.

Eventually, we retuned to the VT 9 trailhead, where we scoped out the campsites; there appeared to be three of them available. But, we didn't have a cell signal here, so we couldn't confirm the directions to the north end of our hike tomorrow, so we drove into Bennington to get a cell signal.

Since we were there, we opted to get dinner at the Bennington Pizza House. After dinner, we returned to the trailhead, where we found that a group of bikers we saw near the restaurant had set up camp in one of the tent spaces. Since we couldn't fit three tents into the other two, we decided to tent in the parking lot, repositioning the car to make it harder for someone to accidentally run us over.

The gravel parking lot made it impossible to use tent stakes, so since the weather for tonight was forecast to be good, I opted to go without my rainfly again.