I was hoping that my shovel had fallen out in Papa Monkey's car yesterday in the shuffle, but quick search didn't turn up anything, so I'm definitely going to need to buy a new one.

We dropped Rainbow off at MA 2 trailhead so he could hike south, and Papa Monkey dropped me off at the parking lot at the top of Greylock. The weather there was very nice, perfect for a short day's hike.

I had worn my crocs for the car ride, and forgot that's what I still had on when I got out of the car and started to walk away. Fortunately, Papa Monkey noticed, and I was able to avoid having to hike down a steep mountain with almost no protection for my feet. Papa Monkey drove to a parking area a mile further down the trail, to pick up where he left off. 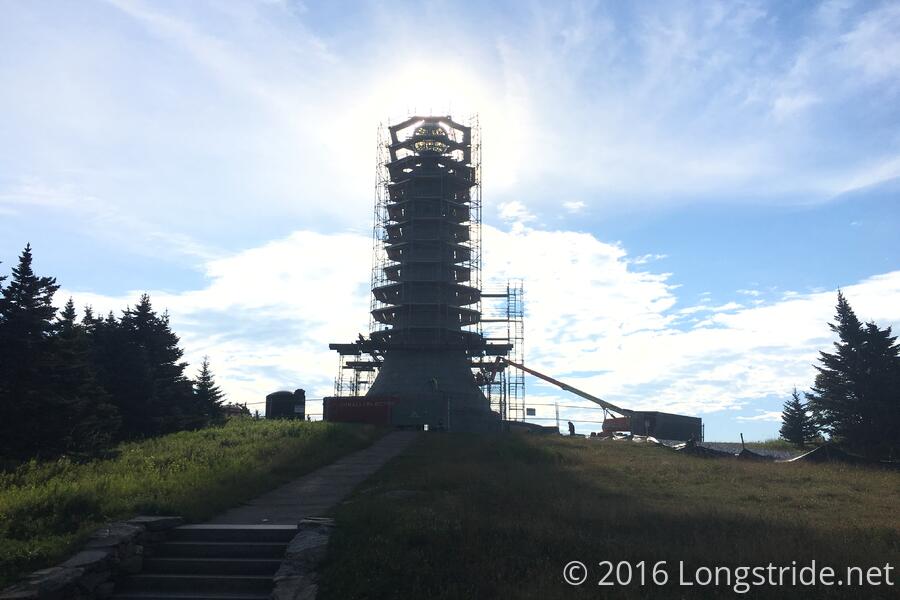 I continued from where I left off, and took some time to look at the display plaques and take in the scenery, since Papa Monkey was going to be at least half an hour behind me. The hike down the north face of Greylock was a lot easier than I expected based on the elevation profile and my hike up, but once down from the top of the mountain, there wasn't much in the way of scenery.

I got started a little after 8, and my 6.3 mile hike took just over three hours, completing the AT in Massachusetts. Only three states to go now!

I waited in a grassy area across the street from the trailhead mooching wifi from a nearby building for about an hour for Papa Monkey to make it to the trailhead. Rainbow showed up shortly afterwards. We drove to a nearby McDonalds, then made our way to Vernon, CT, where we checked into a Days Inn.

After showers, we got dinner at Texas Roadhouse, and then went to the movie theater to see Star Trek Beyond. I got a beer, mostly for the novelty of having a beer in a movie theater, and the movie was better than I was expecting.

Tomorrow: zero, do chores, and head back to the trail.

This post contains links to amazon.com. As an Amazon Associate, I earn from qualifying purchases.
Appalachian Trail, 2016
« (VT 9 (gap between Greylock and MA 2) / Williamstown Motel) Previous Entry
Next Entry (VT 9) »