Today started off with a pancake and bacon breakfast at Moonlight Diner and Grill, before starting off on a walk to the trailhead. As luck would have it, before I got too far, a car pulled over and asked if I wanted a ride. As it turned out, it was the same person as gave me a ride last night, Sonora.

After a short drive, we arrived at the Pine Cobble Trail, and I began my approach to the Long Trail. While it wasn't terribly warm, it was relatively humid, which made for less than ideal hiking conditions. It wasn't long before I was completely covered in sweat. The mosquitoes and gnats were out in full force, the bloodsuckers already attacking me before I even left the trailhead. 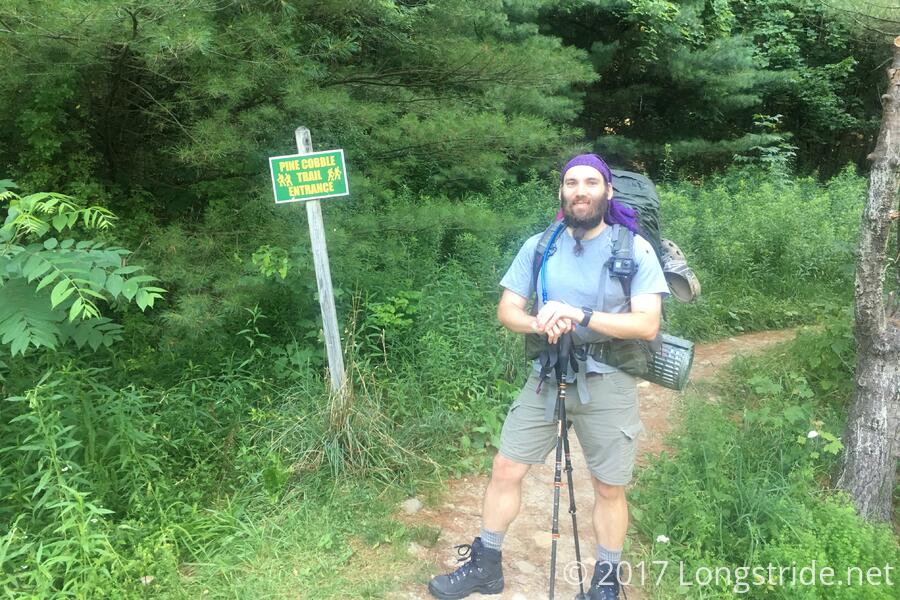 At the Pine Cobble Trailhead

Whoever maintains the Pine Cobble trail — apparently the Williamstown College Outing Club — really likes blazes. This trail was, for sections anyway, one of the most over-blazed trails I've ever seen.

Being only the second hike I've done with a full pack since last September, it was a tough 1.6 mile climb to the Pine Cobble summit, but the tough hike was rewarded with a great view — easily the best of the day. From the summit, I could see Mount Greylock, the tallest peak in Massachusetts. 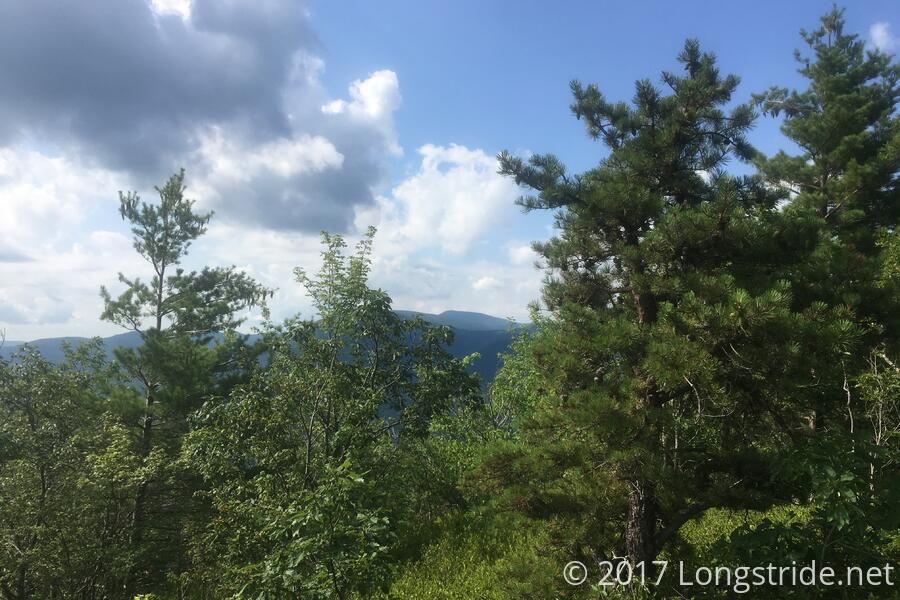 From near the Pine Cobble summit, and continuing towards the Appalachian Trail, the trail became very rocky, but only for a short distance. Cairns marked the way forward, and soon, I saw a white blaze. I had arrived, after a little less than a year, back at the AT in Massachusetts. From there, it was a short jaunt up the mountain to the Massachusetts/Vermont border. And so, after 3.4 miles, at 10:40 am, I reached the start of the Long Trail.

For the next 105 miles, the Appalachian trail follows the Long Trail, and I'll be retreading old ground. After that, the trail splits, and the AT heads off to the east, towards New Hampshire, while the Long Trail continues north, ending at the Canadian border. And while it's nice to see familiar sights again, I'm looking forward to the new ground that lies beyond.

Another three miles brought me to the Seth Warner shelter, the first in Vermont, where I stopped for a break. That break wound up longer than intended, as I sat there for 45 minutes talking with other hikers also there for a break. (I met a member of the Green Mountain Club trail crew, as well as two AT hikers, one going south, and one going north.)

From Seth Warner, the trail continued up to the day's high point, an apparently unnamed 3025-foot peak with not really much of a view. The humidity sapping my strength, I stopped there for a short break.

While I was there, two hikers/CB radio enthusiasts, Ken and Deb, showed up with a huge CB antenna to broadcast from the peak. This is known as "Summits on the Air" — SOTA — which immediately reminded me of the "SOTA Jerks" I met last year on Killington Peak (and who bought me a beer and some food at the ski lodge just past the summit). It turns out, Ken and Deb were friends with them. Small world!

Continuing on, the trail brought me to a familiar sight: a large lake, the apparent byproduct of a beaver dam, where I had stopped for a short break last year.

Later, passing by Lake Hancock, I found that my water bladder was completely empty — I had filled it with "only" 1.5 liters of water this morning, figuring that that, plus my 1 liter water bottle, should be sufficient for the day. If it had been running water, and not a lake, I'd have considered getting water there. But, I only had one more (short) peak to climb before a nice long downhill to the next shelter. With the water left in my bottle, I was fairly certain that if I was able to make it to the peak, the relatively gentle hike to the shelter would not use up all of my remaining water, and if it did, I knew I'd pass by a stream or two in-between that I could refill with. (Also, collecting and filtering water tends to be a somewhat time-consuming process, and I didn't want to stop and wait for that when I could just do it at the shelter without any pressure.

Later, near a dragonfly-infested swamp with a boardwalk, I managed to catch a nice photo of one: 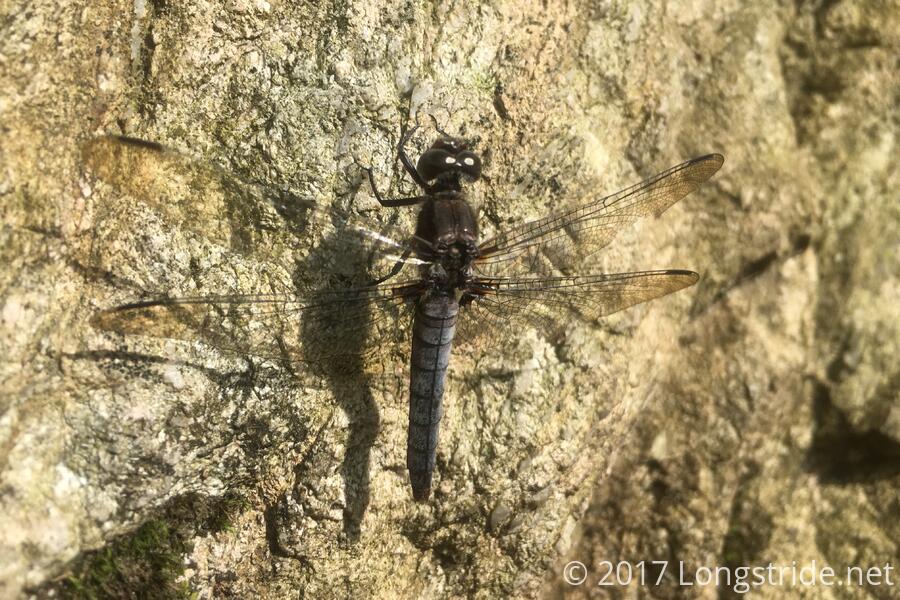 I made it to the Congdon Shelter at 4:45, where I collected water, and relaxed, chatting with the other hiker there while I was waiting for my water to filter. Shawn, 73 years old and from Georgia, is on the Long Trail for fourth time, however, it is likely to be his last — he hurt his ankle and has been stuck here. Apparently lacking a map (though, fourth time on the trail, why would you need one?), he was unclear of the best way to get to town so he could get home. Fortunately for him, I did have a map, and we found two possible routes to get him to Bennington, the closest town to here. From there, he'd be able to get back to Williamstown, and get a bus home.

I was surprised the two of us were the only people here, but as the evening wore on, and as I cooked and ate my dinner (macaroni and cheese, with broccoli, and tuna; and "oriental flavored" ramen), roughly eight more hikers came through — some continuing on, most others tenting. Neal, who is hiking about 140 miles of the LT with his dog, Pax, and had started from the Pine Cobble trail shortly after I did, also opted to stay in the shelter.

I did find two surprising equipment SNAFUs. The clean water bag that came with my water filter was missing. Presumably, I took it out when I was finding the dirty bag, to swap the 2 liter dirty bag for a 4 liter bag I bought a couple of weeks ago. While this is inconvenient, in practice, the clean bag was usually an intermediary, and rarely did I actually need it, since I have three other water containers that I can filter directly into.

The other problem was that my headlamp appeared to be completely discharged. I know I had checked it shortly before the trip, and thought I had plugged it in to charge it up. I'm guessing it accidentally got turned on while in my pack, and discharged. No big deal there either, since I have a battery I can charge it with.

Vermont is fabled for its mud — it's even called "Vermud" by some — and while I didn't get much of it last year on the AT, it's definitely out in force this year. So far, its not been bad, though my boots are quite a bit more muddy than they usually are after only 13.5 miles of hiking.

Humidity aside, the weather today turned out to be better than forecast, with none of the lightning that had been called for. A light rain fell for a short time, after I had finished dinner and moved all my stuff into the shelter, and while there was some rumbling of thunder, there was no visible lightning.

It was a tough day, and I'm more tired than I've been in quite a long time, but still, it's good to be back.

Tomorrow: 14.4 miles to the Goddard Shelter.