On my way to breakfast this morning, I passed by two hikers on bikes, one of which mistook me for another hiker named Gnome; apparently, Gnome lost his hat and one of the hikers on the bikes had it. (I had initially misunderstood this to be that Gnome had lost his pack, which would be a rather surprising thing for another hiker to carry around.)

At the Juice 'N' Java coffee shop, I had two excellent breakfast burritos and a strawberry smoothie, and chatted a bit with Fob, who told me that it got up to 91 yesterday, with a heat index of 96! No wonder my clothes were so drenched; I didn't realize it was that hot.

Leaving the coffee shop, I passed by the two hikers on bikes again, this time with both of us going in the opposite direction.

The hike out of Dalton continued along a road, slightly uphill, for a mile. I managed to trip and fall on an uneven sidewalk seam; I wasn't using my poles or I would probably have caught myself. Fortunately, my nearly empty food bags put my pack on the low end of its weight range, and I was able to arrest my fall with my hands, sustaining only minor scrapes.

After reentering the woods, the trail climbed steeply up a mountain, and then leveled off for a good distance, making for a nice hike. Nice, that was, until some asshole bee came out of nowhere and stung me. (I initially thought it was a huge horsefly that took a nasty bite, but I'd never had a horsefly bite actually welt up before.)

I stopped for a break after about four miles, at the path to the Crystal Mountain campsite mostly because the bee sting was kind of irritating. Relaxing for a bit helped to reduce the irritation.

Three miles later, I reached The Cobbles, a marble rock outcropping that provides a view of Mount Greylock and the Hoosic River Valley, including the town of Cheshire. It's not often I get such a clear view of where I'm going to be hiking to. 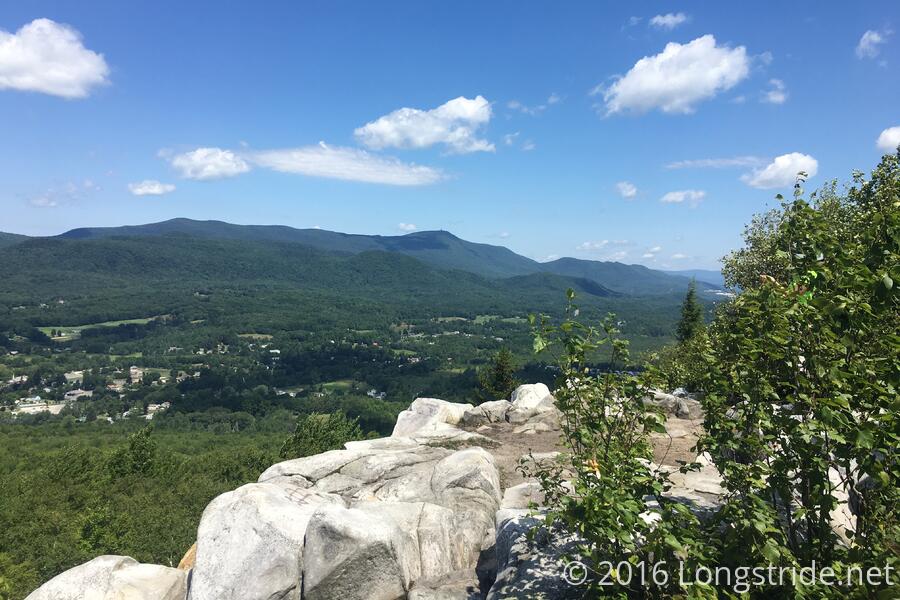 My second break was in Cheshire, at Diane's Twist, an ice cream shop right on the trail. I had a hot dog (the smallest I've ever seen) and a banana split (sans banana, since they were all out!). There were five other hikers here, including eventually Fob, and the two hikers on bikes from this morning.

After leaving the ice cream shop, I began my approach to Mount Greylock, cutting through town and then through a (steep) open field, before reentering the forest. After a few miles, I reached a somewhat confused Freebird, who was trying to go north to Greylock, but accidentally got turned around after a break, and had returned several miles south. This is every hiker's worst dream. We chatted for a couple of miles as he got his bearings; apparently, he saw some SOBOs go past as he was finishing his break, and followed them instead of going north. He was trying to make it to North Adams to meet up with someone he had met yesterday who was insisting he stay at her house that night, about another 11 miles past where I ran into him; it seemed unlikely he's make that; at best, he'd be there after 7 pm, but he was determined to try, and eventually passed me. (He invited me, but that would have been an almost 24 mile day, and I wasn't really interested in doing that.)

I took my third break at the trail to the Mark Noepel Shelter, and then continued on towards Greylock. The final ascent up the mountain was steep and rocky, but not actually as strenuous as I expected from the elevation profile.

At the top of the mountain is the Massachusetts Veterans War Memorial Tower, currently closed and under repair, and the Bascom Lodge, which has a restaurant, some private guest rooms, and a twelve person bunk room. I checked in after a bit of a wait, during which time my feet were screaming in pain after the over half a mile altitude gain over eight miles from Cheshire.

In the bunk room, I met Rainbow, who told me about a car-based slackpacking scheme he and hiker Papa Monkey were doing. A short while ago, while the two were at the Bearded Woods hostel (which I wanted to stay at to slackpack a day, but they were full the day I wanted to arrive), they got addicted to slackpacking. Papa Monkey lived an hour away in Connecticut, and went to get his car, and the two have been slackpacking their way up Massachusetts ever since. Rainbow mentioned they were looking for a third person to join up. I said I might be interested.

Papa Monkey then came into the room, and I recognized him from passing him on the trail yesterday and the day before. The three of us discussed it further, until I had to leave to get a shower before going down to the lodge's restaurant for dinner.

At dinner, I was seated with Gary, Rich, Mary, three (relative) locals who had never talked with a thru-hiker before, so they asked a lot of questions about hiking and the AT. Besides that, we had a great conversation. Also, somehow, I managed to break my knife while buttering bread.

After dinner, I returned to the bunk room, where Papa Monkey and Rainbow and I continued discussing the slackpacking plan. PM has to return to Connecticut in two days to take care of something, so tomorrow, we're going to slackpack 18.4 miles shortly up the trail, leaving a 6.3 mile hole from the top of Greylock that we'll fill in on Monday before we drive to Connecticut.

When I started my hike, I wasn't really sure what to expect. Certainly not this, but it'll be the start of an interesting adventure.