I slept in this morning until 7:15, and thanks to the soft pine needle carpet on the ground, slept very well. I felt much better than I did last night. I also just remembered that yesterday was the beginning of my fifth month on the trail. I made good time breaking camp, and left for Dalton at around 8:10.

Originally, yesterday, I planned to stop and tent at the home and blueberry farm of the "Cookie Lady", so-called because she makes and gives out cookies to hikers who stop by. She wasn't around when I stopped by (the Cookie Man was injured recently), but her sons (I'm assuming) were, and I was able to fill up on water from their tap, and get some cookies and a soda and lemonade. (The lemonade was even better than I was expecting.)

While I was there, I also called the Shamrock Village Inn in Dalton, and reserved the last available room. 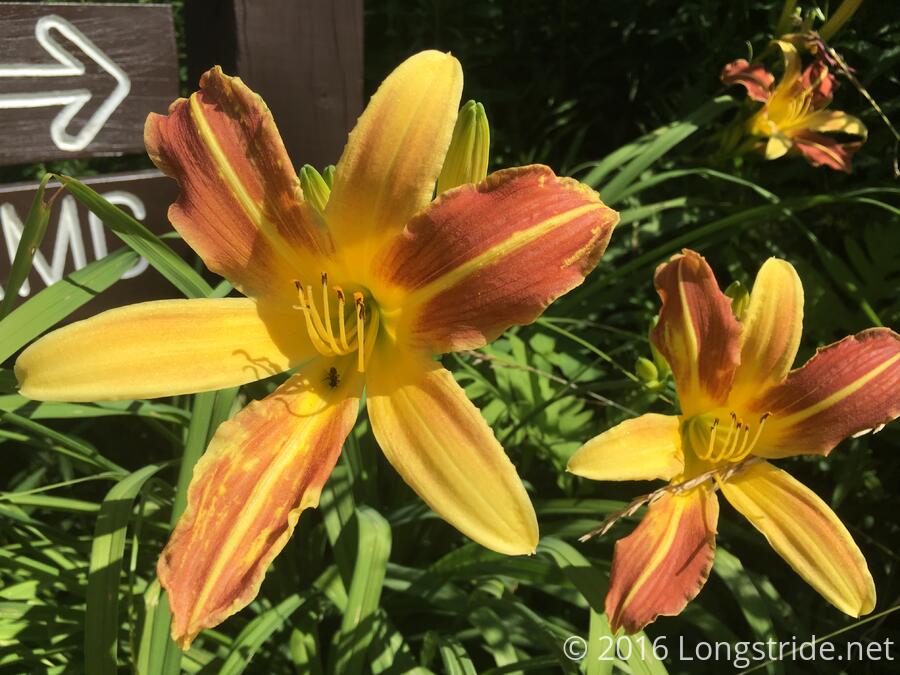 I continued on, noting the rather curious sign at the trailhead, warning that people should not (among other things) pick ferns on the property. (Was that really such a problem the sign needed to note it?) Later, I stopped for a cathole and snack break about five miles later, and then pressed for Dalton, getting there about 2:45.

I had a glorious shower, and changed into clean clothes, leaving today's soaking wet clothes to dry with the room's air conditioning. I made bunk reservations tomorrow night with Bascom Lodge, located at the top of Mt. Greylock. (Normally they want more advanced notice and there is a cancellation fee within two weeks, but they were kind enough to waive that for me, so if for some reason I don't make it there tomorrow, I'm not out any money, as long as I let them know.)

I went across the street to the gas station to buy snacks and sodas to get me through tomorrow's climb up Mt. Greylock, Massachusetts's tallest mountain. Afterwards, I went to the nearby Jacob's Restaurant for dinner. On the way there, I chatted with Sunny Side Up, who was waiting at a bus stop across the street from the hotel for a bus to the mall to watch the new Star Trek movie. At the restaurant, I talked with Takeout during dinner.

For the past few days (I think since the day after I temporarily switched my insoles to my thicker backup pair), my big toe and the toe next to it on my right foot have grown some sort of blister or inflammation, I think as a result of them being too cramped. (I don't think inadequately loosened my shoelaces.) It's usually not a problem, except when I step just right, and the two toes are pressed into each other there, which causes them to hurt.

After dinner, I started to walk to the pharmacy to look for some sort of toe spacer to help with the problem, but turned back after deciding the pharmacy description was a bit sketchy and it was too far away to chance the walk. Instead, I went to the beer and liquor store next to the motel, which has a very nice selection, and got a beer.

I also checked the motel's hiker box, and was very happy to find they had a box of gallon-size ziplock bags. I took one, and used it as a replacement for my covered-in-soap toiletries bag (which had at least one small hole). (Monica: Also in the box was a National Geographic rain poncho.)

I also planned out the next 80 miles to Manchester Center, which I should reach in six days, so I knew how much food I need to get in North Adams in two days.

Tomorrow: a quick jaunt through Cheshire, before climbing Mt. Greylock, the highest peak in Massachusetts.