This morning's breakfast, courtesy of the Yellow Deli and assisted by other hikers staying there, was eggs, toast, rice, and kale, and was just as good as it has been the other two days we stayed.

After dropping Rainbow off at today's northern trailhead at VT 14, Papa Monkey and I returned to the VT 12 trailhead and continued our hike north. We got started around 10:15, putting this in the running for latest start time to date.

On the way up the first hill today, "Dana Hill", I found a folded check on the ground. Upon further inspection, I realized it belonged to Two-Pack. The check had a signature on the back, suggesting it had been electronically deposited, though i had no way of confirming that at the time. Papa Monkey had given Two-Pack a ride yesterday morning and had her phone number of someone who could relay a message to Two-Pack, so I sent them a message explaining the situation. (Two-Pack got back to me later in the day confirming the check had been electronically deposited, but requested I save it just in case of a problem.)

For a few days, Rainbow had mentioned he was looking forward to seeing maple sap lines. Today, we finally saw some.

Just short of six miles in, right before Cloudland Rd, there was an empty trail magic cooler, a trash bag, and water. It seemed a nice enough place, so I stopped there, took a break, and waited for Papa Monkey to catch up. Today was a lot of little ups and downs, and I had pulled ahead during one of the easier sections.

I took a longer break than usual, and just as I was packing up to leave, Papa Monkey finally caught up; apparently, he had been on the phone trying to schedule a time his car to get fixed, and was having an unusually problematic time getting this accomplished.

The delay in waiting for Papa Monkey proved fortuitous. While I was waiting, trail magic pulled up at Cloudland Rd. SOBO Gastank, who hurt his knee in the Presidentials (part of the Whites) and was taking a week or two off the trail, loaded up the back of his car with beer, sodas, fruit, and donuts, making them available to his fellow hikers. He also had folding chairs we could sit on! Rainbow was also there, having arrived from the north a few minutes before Papa Monkey and I got there. (Thanks again, Gastank!)

We sat and chatted for awhile, when a pair of trail angels pulled up in their car. They maintained the cooler that I stopped at, and had come to refill it with oranges, rice crispies treats, and brownies. (Thanks, Charlotte!)

Between my break and the trail magic, I was stopped for over an hour and a half. It was worth it, though.

From there, the trail, which had already been relatively easy today, got even easier, and I flew through the rest of the day. There was another place with trail magic (also empty) just before Joe Ranger Road. After the road, apart from a somewhat sketchy rock on a cliff that required navigating around, the trail continued to be very easy, and some of it even seemed like it was new (or at the least, recently very-well-maintained).

The trail went through a couple of areas with very tall pine trees (the kind that have branches and needles a hundred feet above the ground, and nothing below that). It was a very nice change of scenery. 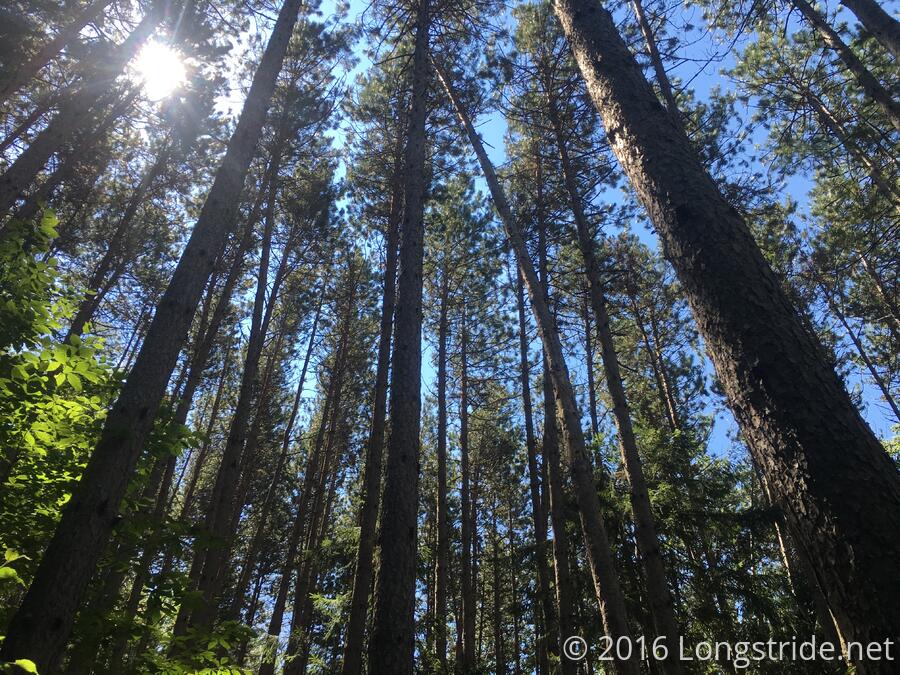 One truth about the Appalachian Trail, no matter where you are on the trail, is that if there is ever a choice in directions, the AT goes uphill. It was nice to see someone codify this on a sign. 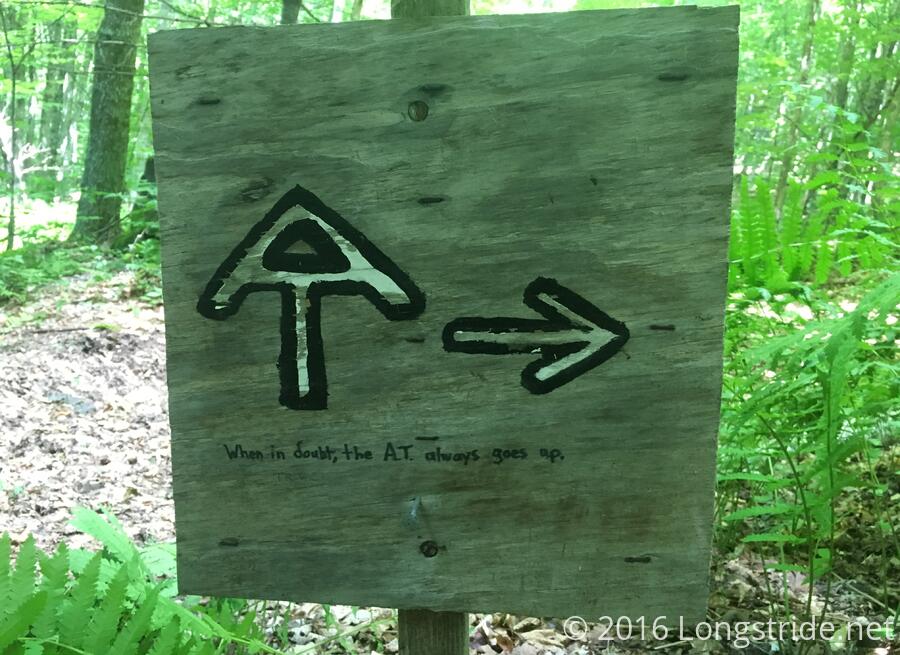 When in doubt, the AT always goes up

After another six miles from Cloudland, I took my second break, at a bench with a nice view. I had thought I was going pretty fast (at least, relative to everyone else), but shortly after I sat down, a whole pack of hikers passed me. 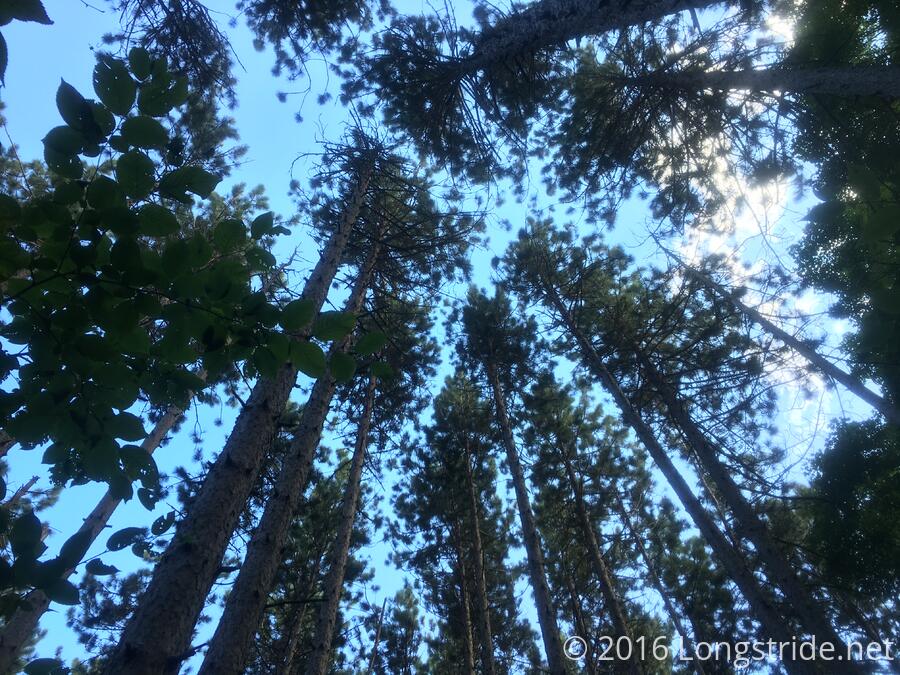 After my break, the trail continued downhill for another mile of easy ground, crossing the White River at VT 14. This location is famous for two reasons.

First, the bridge is popular to jump off of. The water is fairly deep, and there's easy access points on both shores that locals use for access for swimming.

Second, the Hart family, who lives in house across from the bridge, has been a constant source of trail magic for years. They have a small bunk house that can hold half a dozen hikers, as well as their porch, and there's some space to tent as well. When we got there, they were out on their porch giving out hot dogs and sodas.

The Hart family has been doing this since 2002, when their son thru-hiked. It started out as a party when he came through, and then they've been doing it constantly ever since.

After psyching himself up all day for the bridge jump, and getting advice from a local (who was also a certified lifeguard, and also manager at a pizza place in Hanover, NH) on where on the bridge to jump from, Papa Monkey jumped off the bridge, while I took a video.

Shortly after, while Papa Monkey was drying off, Rainbow arrived. Papa Monkey attempted to convince Rainbow to jump, and Rainbow got as far as going over the railing and standing on the edge of the bridge, but even after ten or fifteen minutes of coaching by Papa Monkey, he eventually decided not to jump.

(This wasn't the first bridge jump opportunity on the trail, and probably won't be the last, but I've always refused to even consider jumping from a bridge; it's risky, and while it generally seems to turn out well for everyone else, the last thing I need is for my hike to end as an unfortunate result from a stunt.)

We had planned on going another mile and a half to Podunk Rd, but with the further "distraction" of the Hart family's trail magic, and the bridge jump, it had gotten late, so we ended our hike today here, and Papa Monkey and I will pick up from here.

We drove back to Rutland, to stay at the Yellow Deli again. I'm hoping this will be the last time we're here. Papa Monkey is a bit fascinated with the place, but I feel like we're taking advantage of their generosity, and that we've really overstayed our welcome, especially since we've got a car and are doing a very non-traditional hike at this point.

I got a shower, while Papa Monkey and Rainbow went out to pick up a birthday cake and candles for me. It was a pleasant surprise, at least as much as one can be surprised after answering questions like "what kind of cake do you like?" and "chocolate icing or vanilla?". In any case, I really appreciated the gesture. Thanks, guys! 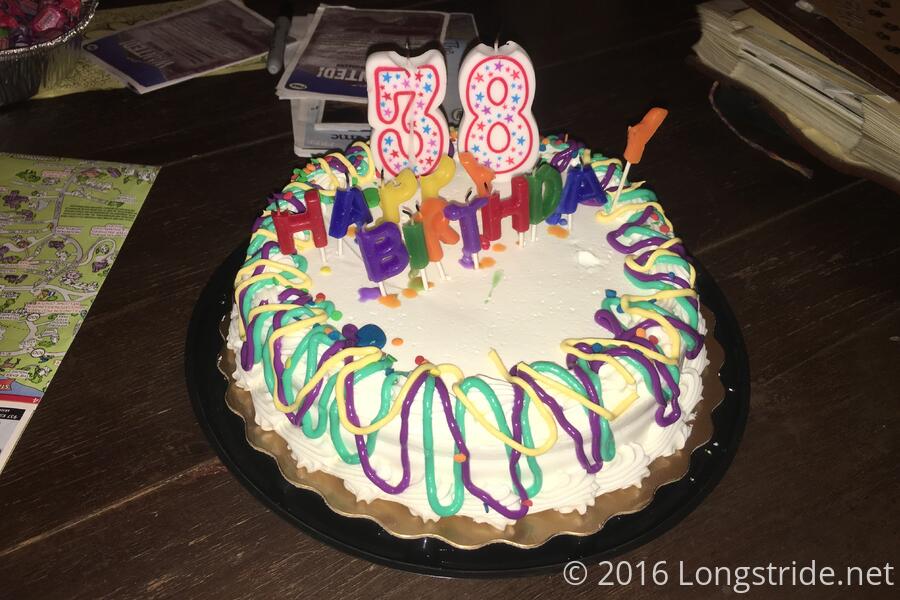