Linda Hart continued her tradition of feeding hikers by providing us with eggs and sausage (and also coffee) in the morning. This helped wake us up early. (Well, what really woke me up was when someone turned on the exceedingly loud coffee machine at 5 am. I have no idea how Clo Bear slept for the next hour with that thing going next to her head.)

Papa Monkey set off to fill in his missing mile and a half between VT 14 and Posunk Rd around 7. Clo Bear, and I drove up to Podunk to hike back to the Hart family's home shortly after, getting here just as Papa Monkey did. Clo Bear and I then hiked (very quickly — at about 3.5 mph) down the trail, closing that gap. With that mile and a half done, that completed 80% of the trail for me. 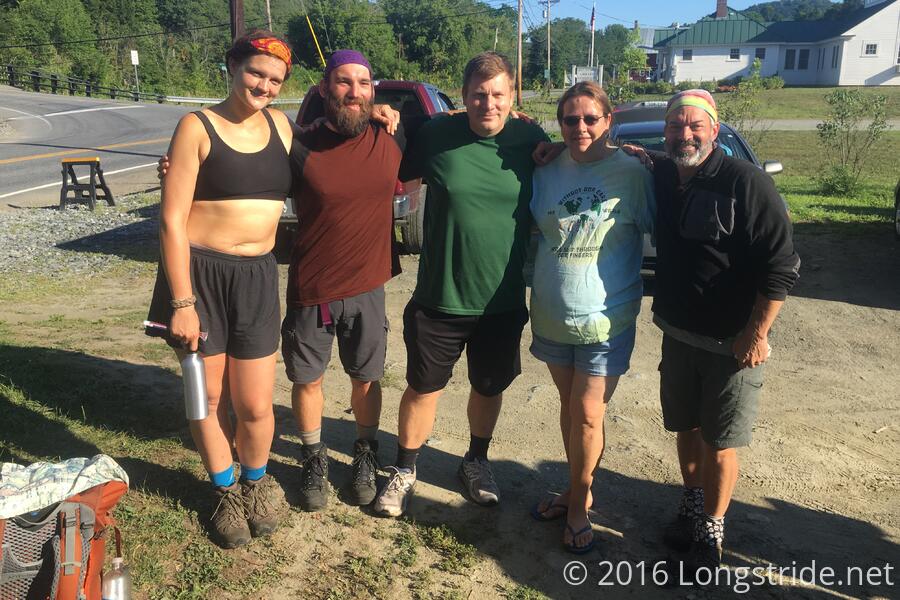 Afterward, we set off for the trailheads for today's hike, the 14.5 miles from Trescott Rd. to Grafton Turnpike. Clo Bear and I went to Trescott and hiked north; Papa Monkey and Rainbow went to Grafton and hiked south.

The day started off with a long and very gradual uphill, steepening after a few miles on the way up Moose Mountain. We stopped for a break at the Moose Mountain Shelter, before continuing on.

There really wasn't much to note about today's hike, scenery or otherwise. Our hike ended at Grafton Turnpike in a couple of large fields used for parking for hiking and the nearby ski slopes.

Just off the trail here is the residence of Bill Ackerly, the "Ice Cream Man", who regularly provided ice cream, water, and other trail magic, and allowed hikers to tent in his backyard. I should say former residence, though, since he died in May. When we got there, though, there were already other hikers milling about.

The problem with groups is that they can allow bad ideas to take root and blossom out of control. By late afternoon, there were probably a dozen of us hanging around the Ackerly home's backyard, with no real ideas of what we were going to do. It seemed a bit weird to be there since Ackerly was dead, but there was no clear indication that we shouldn't be there.

Aside from the parking area along the road (which would probably have made a decent campsite, though a very visible one), there wasn't a good place to camp for the night. If it had just been Papa Monkey, Rainbow, and me, we probably would have just set up tents in the parking area behind our cars, so they'd be less visible, and that would have been the end of it.

Someone asked where people were planning on staying for the evening. Someone else said they were probably going to camp here. The reasoning on that was that since there was no one to get permission from, it would be ok.

Almost immediately, a small tent city erupted in the backyard. All it took was one person to actually say they were staying for everyone else to follow suit.

Clo Bear and I returned to the parking area to await Papa Monkey and Rainbow, who had my car and the rest of our equipment. There was some discussion when they did, but it was mostly about whether or not we should leave our cars parked in the driveway (after we temporarily moved them there so we wouldn't have to carry everything the couple tenths of miles from the parking area to the house) or in the ski parking lot (there were signs there saying overnight parking was only permitted by prior authorization). I was uneasy about both choices, but didn't press the issue, and the decision was made for me when Papa Monkey decided not to move his car out (thereby blocking mine in).

Rather than tenting, the four of us set up on the porch with just sleeping pads and bags, except for Papa Monkey, who set his tent up on the porch (I think to keep the bugs away, though the bugs didn't really seem to be much of a problem that night).

I went to sleep uneasy about this, but after 9 pm had passed and no one who apparently lived at the property showed up, the collective assumption seemed to be that no one would at this point, and we'd be able to be gone in the morning without leaving a trace that we were even here.