We got up around 5:30, and went back to the main house for breakfast, with blueberry pancakes courtesy of Hammer Time. There was a light rain, starting the day off somewhat drearily.

Papa Monkey dropped Rainbow and me off at River Rd, and we started hiking towards VT 12 around 8:45. By then, the rain had stopped, though it remained foggy.

The trail started off steep from the parking lot, though aside from a few rocks and roots, it was pretty easy going. Conveniently, the fog lifted just about as I climbed the mountain, so I didn't get too wet from the fog.

The trail this morning looked like had been recently maintained, but inconsistently. There were sections showing clear signs of the trees and brush on the side of the trail having been trimmed, but it was done sporadically, with overgrown sections of trail that should also have been trimmed between each short maintained section.

The trail is constantly surprising. Rainbow and I were momentarily dumbfounded when we came around a turn and found a ladder coming up from a steep drop-off. The ladder was tied to two trees, and clearly a temporary measure, but it was also the only safe way down. (This section of trail felt new; it wouldn't surprise me if the ladder is eventually replaced with a rebar ladder drilled into the rock face. 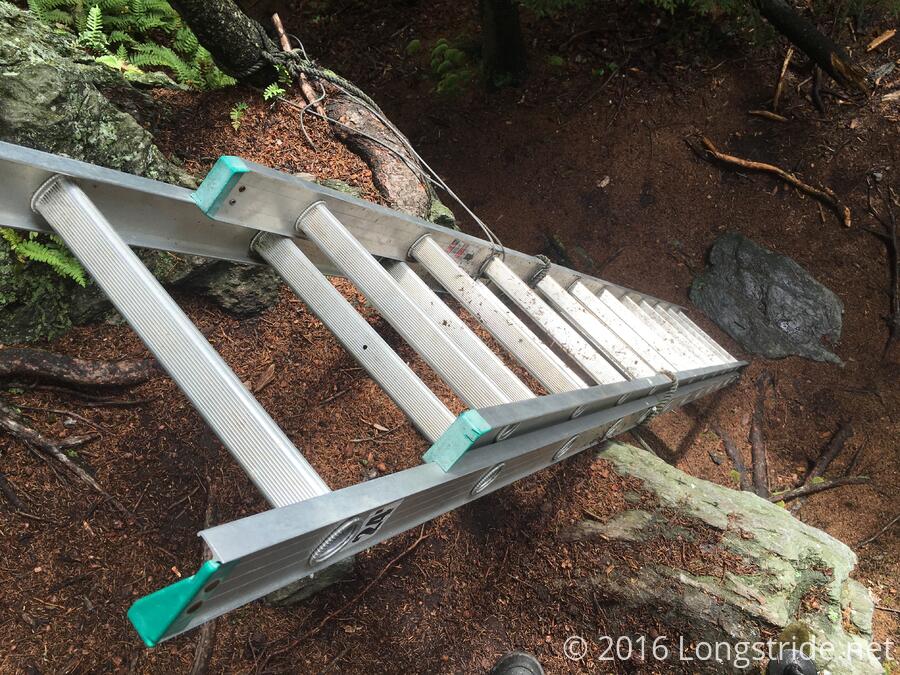 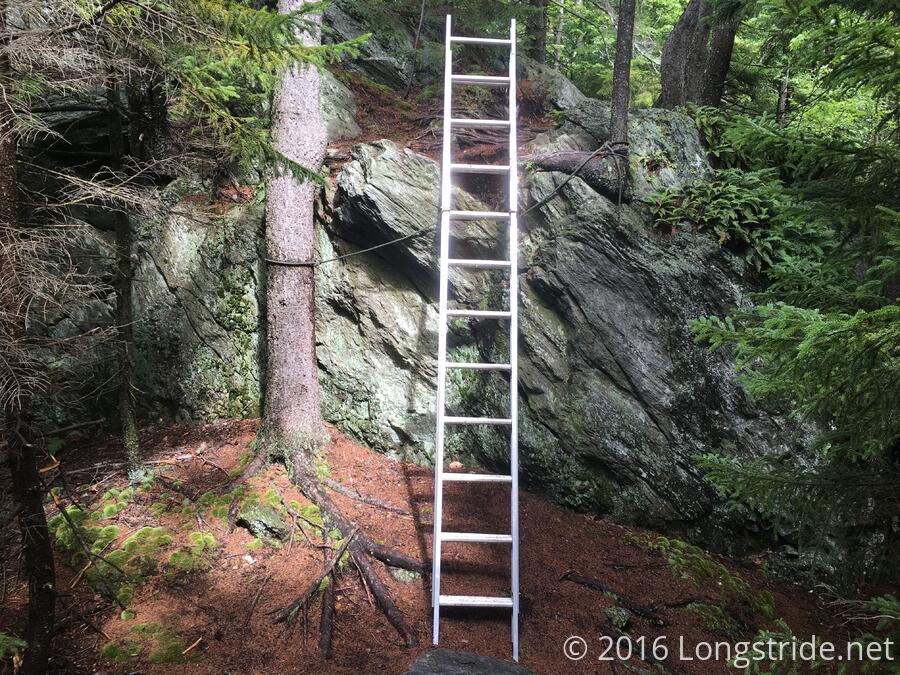 While it was not raining, it occasionally sounded like it was. The earlier rain left water on tree leaves, and the occasional gust of wind caused that water to be blown off, sounding like a brief rain.

Rainbow and I took our first break at Stony Brook, with a mother and her two sons who were out for a short section hike. I had passed them yesterday near Maine Junction, and this led to a discussion on slackpacking, which was convenient, because one of the boys was having weight-related pack issues.

We took our second break at Luce's Lookout, a privately owned cabin a short just off the AT. The cabin is generously available for hikers to use (though fires are not allowed in its fireplace), and has a staircase up the outside of the building to a small observation platform on the top, which gives you a great view of the surrounding area.

View from The Lookout 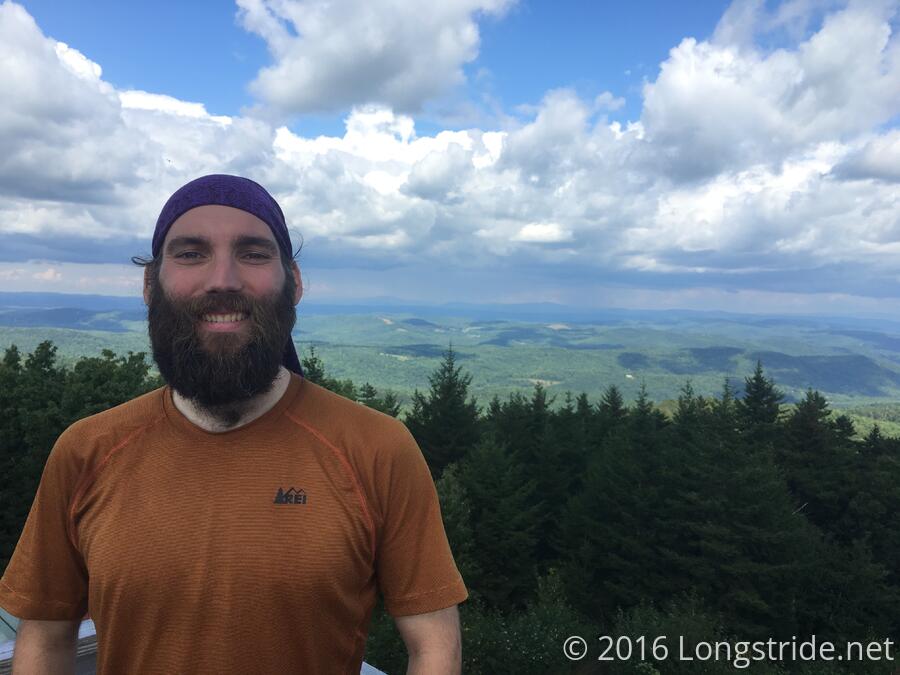 Also at the cabin, we met hiker "Southbound", who is actually traveling north; he got his trail name because he has the SOBO version of the AWOL guidebook. (He originally planned on going SOBO, but didn't.)

Furthering my suspicion that the trail has recently been rerouted is a 0.8 mile discrepancy in distance from the trailhead to the lookout between what's in the guide, and my gps tracking app.

After the lookout, the trail joined what had once been a roadbed; though grassy now, it was wide, level, obstacle-free, and almost flat. Finally with an opportunity to hike relatively effortlessly at closer to my top speed, I left Rainbow behind and took off down the trail.

At an area where the trees thinned, I got a glimpse of the sky, with an ominous dark cloud looming overhead. Though by this point the trail wasn't quite as nice as it was right after the lookout, I tried to keep my speed up to limit how long I'd get rained on, especially after the cloud let loose with a few raindrops. The rain never came, though, and the cloud eventually blew away (or I hiked away from it).

Approaching the road, the forest trail gave way to a cow pasture, with the thinnest cows I've ever seen. From there, the trail went down a hill with heavily overgrown grass on both sides of the trail.

I got to the car at 5:30, about half an hour ahead of Rainbow. We returned to the River Rd trailhead, where Papa Monkey eventually arrived shortly before 8, having hiked a bit slower today.

We returned to the Yellow Deli Hiker Hostel, resuming our habitation of the overflow bunk room, which has now been labeled with a "VIP Hikers" sign. Papa Monkey and I went a few doors down to the Hop'n Moose bar for dinner. Afterwards, I got a shower, which was an awesome way to end the day.

Today also brought new milestones: over 1700 miles completed, and less than 500 to go, though the actual 1700 and 500 mile markers are in the section over Mount Killington I still haven't done yet. (The plan is to do that in two days, on Thursday, when Papa Monkey goes back to Connecticut for a day.) 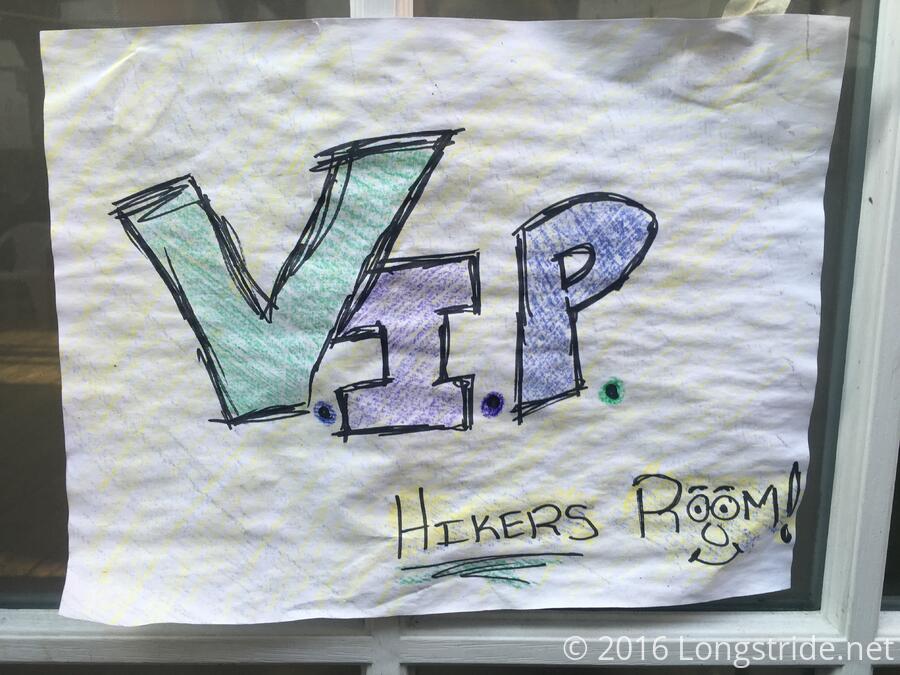