I woke up in the morning to discover that the rain spared us overnight. Checking the weather forecast again, I noted that it would almost certainly be raining fairly early in the day, so I tried to get moving as quickly as possible: it would be best to be able to get hiking before it started raining, and any amount of hiking I could do before the rain started would be that much less hiking through mud.

Taking this as an opportunity to try out my new rain pants, I put on my rain jacket and pants. However, the problem with hiking in rain gear is that no matter how much rain they keep off of you, you eventually still get wet from sweat. Still, though, I feel like I'd rather be wet from my own sweat, than from rain falling on me.

Pretty much immediately after I left camp, a little after 7:15, a light rain began falling, which would persist until late afternoon. Consequently, as the day went on, the ground got increasingly wet and muddy, and the rocks gradually got slicker. However, thanks to the last few days having been nice out, allowing the ground to dry some, there was very little in the way of slick or deep mud to worry about. 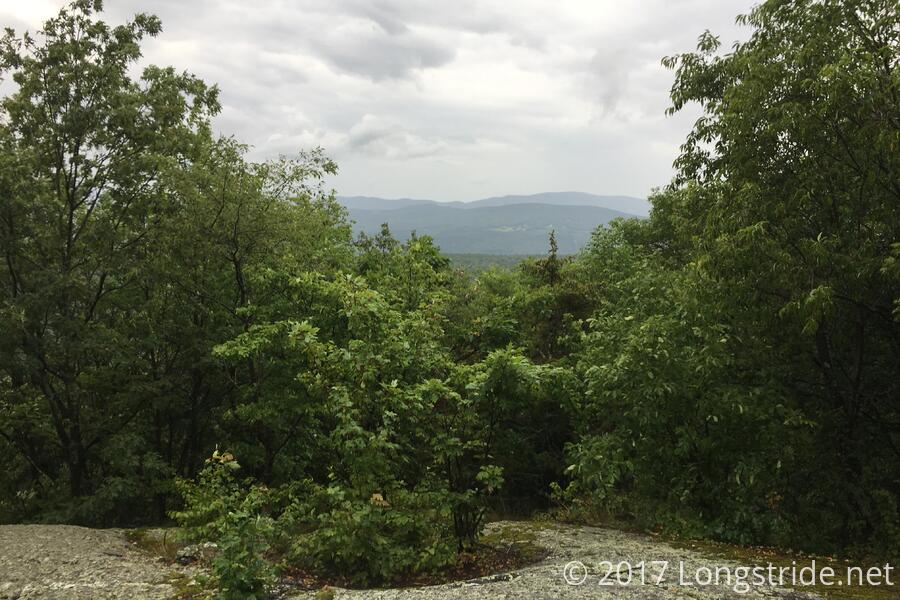 For the most part, this was another easy day on the trail, the gloom added by the overcast sky and rain notwithstanding. The rain was mostly just an annoyance, but my rain pants kept the constant mud splatter from coating my legs.

Between the Greenwall and Minerva Hinchey Shelters, the trail was fairly easy, and I made excellent time, stopping at Hinchey for a break. Past that, the trail was full of little scenes I remembered from last year's AT thru-hike. The parking lot at VT 140 (and the hiker feed there last year), and the steep climb up out of that parking lot. This time, I checked out the Domed Ledge vista, which also had a mostly-obscured look back at White Rock Mountain, and the scree pile near its base. Then came the overlook of the Rutland Airport, followed by a somewhat steep (featuring some overly slick rock slabs) descent down to the incredibly bouncy suspension bridge over the Mill River, just before VT 103. Crossing the road led to a bit of a climb that provided a second view of the airport, before heading deeper into the mountain and climbing up a not-too-difficult rock scramble that eventually led to the Clarendon Shelter, where I took another short break, and had a chat with a high school environmental science teacher out hiking a section of the Long Trail. (Having already hiked a fair number of shorter trails in other countries, she's looking forward to trying the Appalachian Trail once she has the tenure to take a year-long "research break". 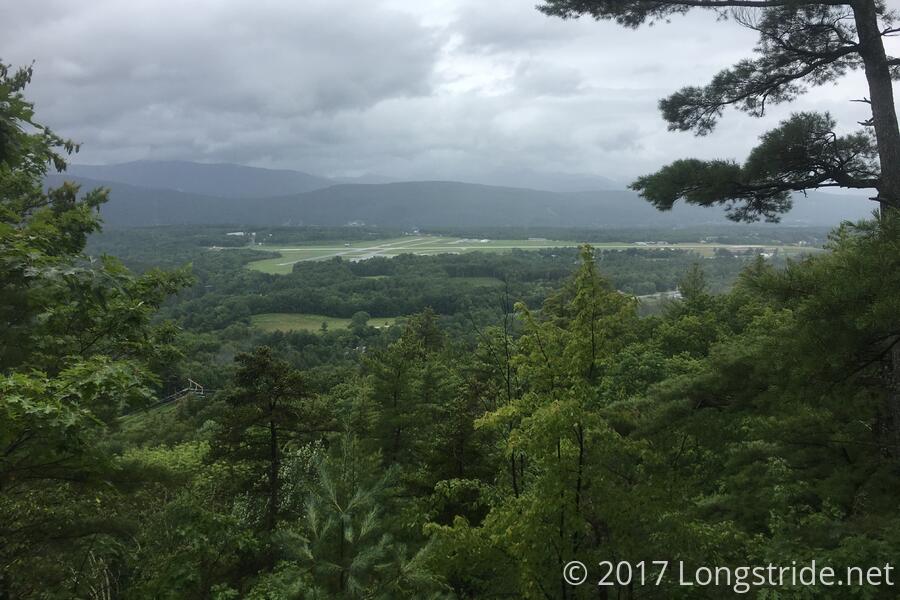 From Clarendon, the trail crossed several small roads in a relatively rapid sequence, bouncing up and down along the the mountain side and crossing and following several large streams (one of which required some tricky footwork to cross without getting wet), eventually leading to the Governor Clement Shelter, where I stopped for dinner.

The Governor Clement Shelter is a fairly impressive shelter, with rock side walls, a fireplace, and an oversized roof that covers the sleeping area, the sizable space in front of the fireplace, and an eating area at the shelter's entrance.

Shortly after arriving at the shelter in the mid-afternoon, the rain had stopped, and the sun occasionally peeked out. With the somewhat improved outlook on the weather (though without any cell service to confirm it), I changed into my other set of clothes, as it was starting to get a bit cold sitting around in wet clothing. The hike so far today not being terribly difficult, I considered pushing on if my feet were still happy after dinner.

When my feet indicated they were fine with moving on, I decided to push on to the next shelter, Cooper Lodge, near Killington Peak (the first 4000-footer in the northeast that northbound AT hikers have the opportunity to climb). Knowing I'd be in town tomorrow, and gambling that the dry weather would hold for at least a few hours to make it to the lodge, I made a number of suboptimal clothing choices so that I could have a more comfortable evening hike. (Primarily, deciding to hike on in my dry clothes, and wearing my long pants, instead of shorts with the rain pants.)

The four and a third mile hike up to Cooper Lodge from Governor Clement Shelter was not as difficult as I remembered it being, though as I climbed the mountain, fog set in, and then the sun dipped behind the mountain, so I needed to pull out my headlamp in order to see well enough to keep my pace up. Sadly, with the fog, and dwindling sun, I couldn’t really see much of the forest I was hiking through, though I did recognize a few landmarks from my AT hike last year.

One of the nice things about climbing the mountains in the northern Appalachians is that the trees tend to get shorter as you make your way to the summit; you can use that to somewhat gauge your process: the shorter the trees get, the closer you are to the (possibly imaginary) treeline, and thus the top.

Cooper Lodge (a "Lodge" rather than a "Shelter", because it actually has four walls and a door) could be an impressive shelter, with some time, care, and maintenance (and money), but it has unfortunately fallen into some disrepair, and it's a somewhat sad place now. While the four walls provided reasonable insulation from the wind that had started to pick up, its windows had long since fallen out, and its bunks are in somewhat terrible disrepair, some of them being tilted, and missing ladders to make entering or exiting the top bunks easy. But, a shelter is a shelter, and it was way better than setting up a tent.

I arrived at the Lodge right around sunset, and all but one other person in the shelter was sensibly already tucked into their sleeping bags. Having my choice between incredibly-slanty bottom bunk, and hard-to-navigate top bunk, I chose the top bunk, and quickly crawled into my sleeping bag (first taking off my pants' legs, which had become wet and dirty from hiking through four miles of wet ground).

Tomorrow: summit of Pico Peak, on the New England Hundred Highest list, and a nero to the Inn at Long Trail and resupply in Rutland.

This post contains links to amazon.com. As an Amazon Associate, I earn from qualifying purchases.
Long Trail, 2017
« (Greenwall Shelter) Previous Entry
Next Entry (US 4 / Inn at Long Trail) »