I got up at 7 am, a bit later than I had planned for. By then, Rainbow had already left to take Papa Monkey to the trailhead at VT 103, our northern endpoint for the day. By 7:45, I had my tent packed up and was ready to go, save for having breakfast, which was in my food bags in the car.

I slept quite well last night, the blanket of pine needles under my tent providing a nice extra cushion.

I wasn't waiting too long for Rainbow to return, and after eating breakfast, we got started hiking around 8:45.

The early trail wasn't too difficult, and we passed by a scenic lake. 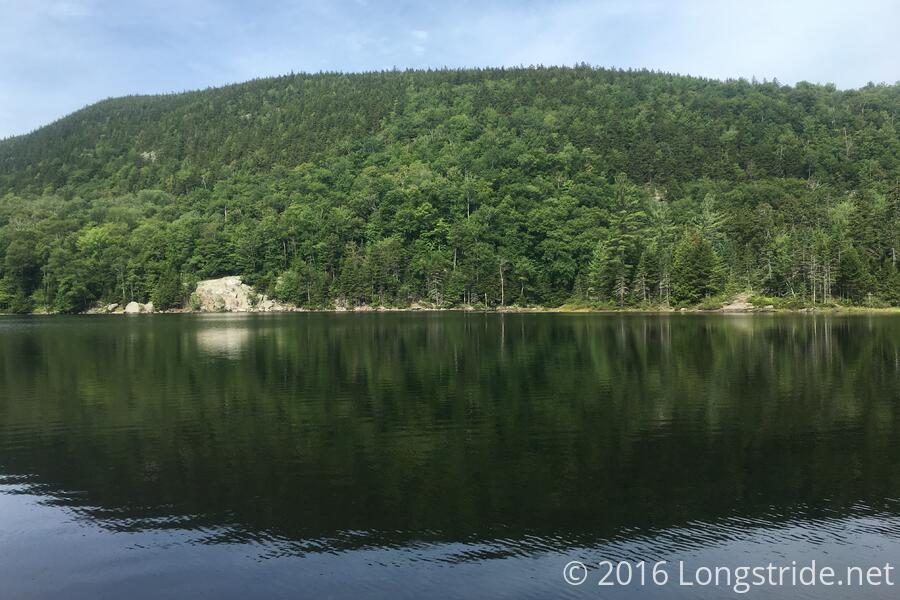 Later on, we passed White Rocks, a mountain seemingly built of tons of white rocks, many of which had been piled up in cairns alongside the trail. (Take that, Pennsylvania!). 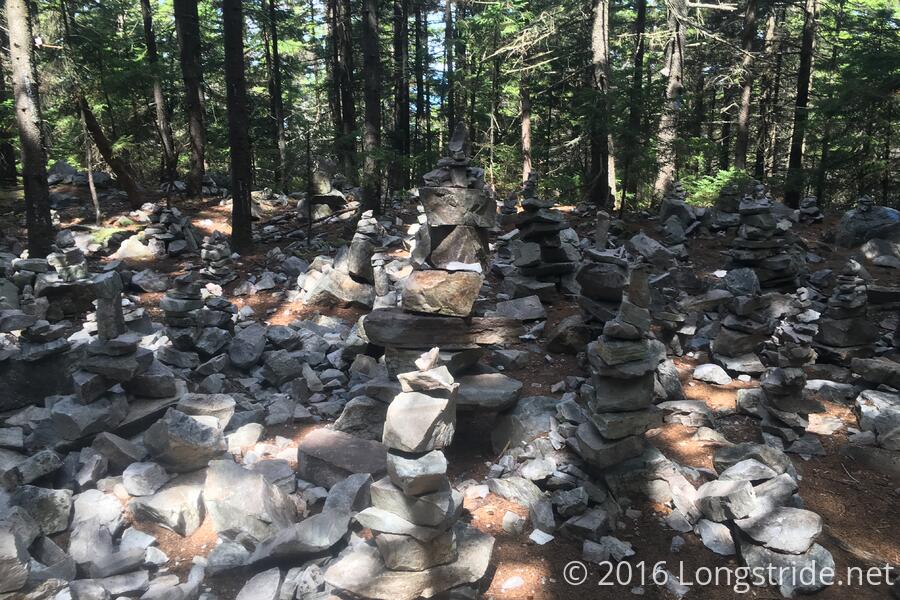 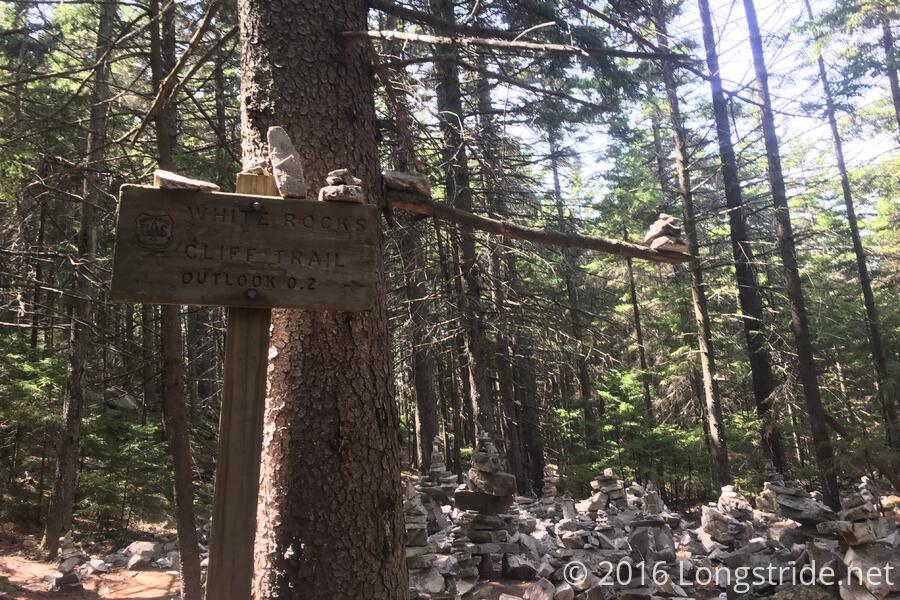 Rock Cairns — So many rocks, they're growing on the trees.

After hearing about trail magic at the VT 140 parking lot, we pushed 8.5 miles to take our first break there. The trail magic was sponsored by the Green Mountain Club, Killington Section. (The GMC is responsible for maintaining the AT and Long Trail in Vermont.) They had a huge spread of food available: soda, lemonade, water, Gatorade, fruit, donuts, coffee, brownies, hamburgers and hot dogs, chips, candy, and more.

Each of the other 11 chapters of the GMC in Vermont was also doing the same thing, at a location within their chapter. This way, every hiker within GMC territory got awesome trail magic today.

Trail Magic — Courtesy of the Killington Section of the Green Mountain Club.

Rainbow and I hung out at the trail magic for quite awhile, probably over an hour, before we got going up the next mountain, Bear Mountain. (Yes, another one.) The climb up was occasionally steep, and rocky, but generally very nice, especially with the pine needle cushion on the ground most of the day. On the way down, we took a break at a view of the small Rutland airport, and were even able to see a small plane take off.

Rainbow and I really like Vermont so far. The state has had a little bit of everything, but nothing to any excess. One other hiker said that the state has a nice "texture", so that's what I'm going with.

We got to the trailhead at VT 103 around 5, and got dinner at the nearby Qu's Whistle House, a former train station converted to a restaurant. It's a nice little place, and we were a little disappointed to hear that it'd be closing in October because the owner is selling the building.

After dinner, we drove to Rutland to stay at the Yellow Deli Hiker Hostel, run by a Twelve Tribes community. Aysh, an elder in the community and who was in charge of the hostel, greeted us, and gave us beds in the overflow bunk room. (The two mens bunk rooms were already mostly full, and there were no bottom bunks left.)

The weather forecast for tomorrow looks fairly dreary, calling for rain, so we adjusted our hiking plan. Rainbow and I will zero tomorrow, while Papa Monkey hikes the next stretch over Killington Mountain. We'll make that section up later in the week when he needs to drive back down to Connecticut to deal with more personal business.

We're also working on our plan for handing the Whites. Everything we've heard (and Rainbow's prior experience) indicates that the White Mountains are challenging, and having only one car will make things significantly slower. Rainbow has a friend, though, that would be willing to come up the week of August 8th and shuttle us around as necessary, making slackpacking there much easier.