After it briefly poured sometime overnight, the sun was out in the morning, and the weather forecast appeared to be correct, at least so far: no rain today.

True to his word yesterday, Joe was up and gone at the crack of dawn; the rest of us in the shelter remained in our sleeping bags for quite a while longer. Zippy was the next to leave, and I headed out 20 minutes later, shortly after 8.

From the David Logan Shelter, the first part of the trail to the Sunrise Shelter was pretty easy. After a short steep section leaving the shelter, the trail climbed gradually or several miles, and then declined just as gradually for another few miles, until arriving at Sunrise. I made excellent time on this section, which was probably the easiest of the trail so far, averaging over 2.25 mph for the first time this hike. Sadly, the shelter didn't live up to its name: the shelter was completely surrounded with trees, so there was no possible way to get a view of the sunrise. Zippy had already made it to the shelter, and we chatted for a short while I ate my snack and briefly let my boots and socks dry out.

As Zippy and I were snacking, an older couple briefly came to the shelter, and we chatted. Somehow, the topic of injuries came up, and they mentioned a woman who had a bug bite on the top of her head. I said I had heard of another hiker who had a nasty bug bite on her leg — that turned out to be Zippy!

On the first leg of today's hike, I had my pack cover on just in case plants encroaching on the trail were still wet, as I didn't want my pack to pick up more water than necessary. This turned out not to have been necessary; few plants were extending into the trail, and most that were were fairly dry, so for the second half of today's hike, to the Sucker Brook Shelter, I left the pack cover off, so my pack itself could dry out. (At least, having the cover on in the morning did allow the cover to dry out, which it wasn't able to do hanging up in the shelter last night.)

From the shelter, the trail descended to VT 73, and then crossed the road to climb towards Mount Horrid and its Great Cliffs. The mountain turned out to be somewhat aptly named. The side trail to the Great Cliffs were closed until August 1st due to peregrine falcon nesting season, and Mt. Horrid itself had no view. Instead, the mountain just teased at having a view; near the summit, one could see that there was a great view just on the other side of a narrow band of trees on either side of the trail. Following from Horrid, the trail climbed two other mountains in close proximity; only one, Cape Lookout Mountain, had a view. Zippy had a few minute head start on me leaving the shelter; I passed her shortly after the view. 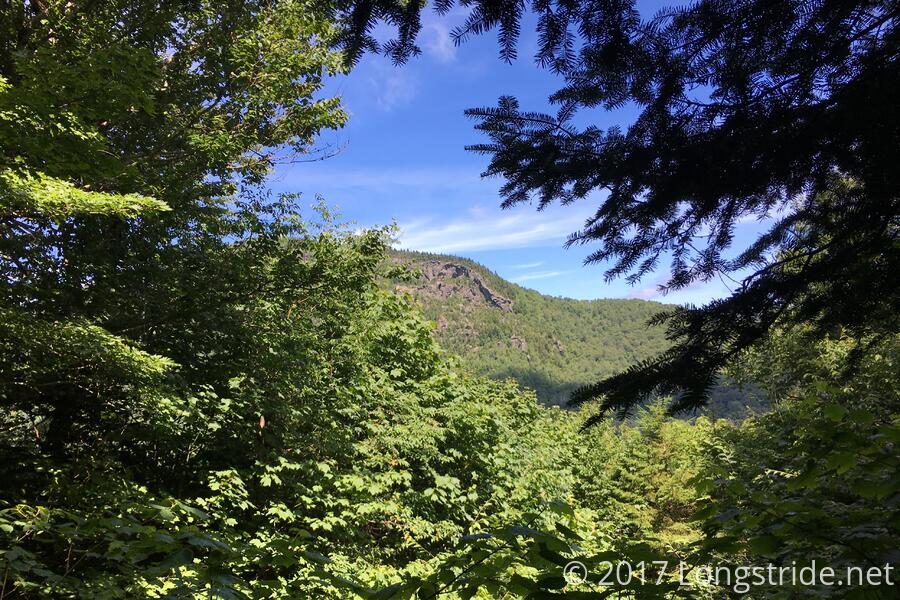 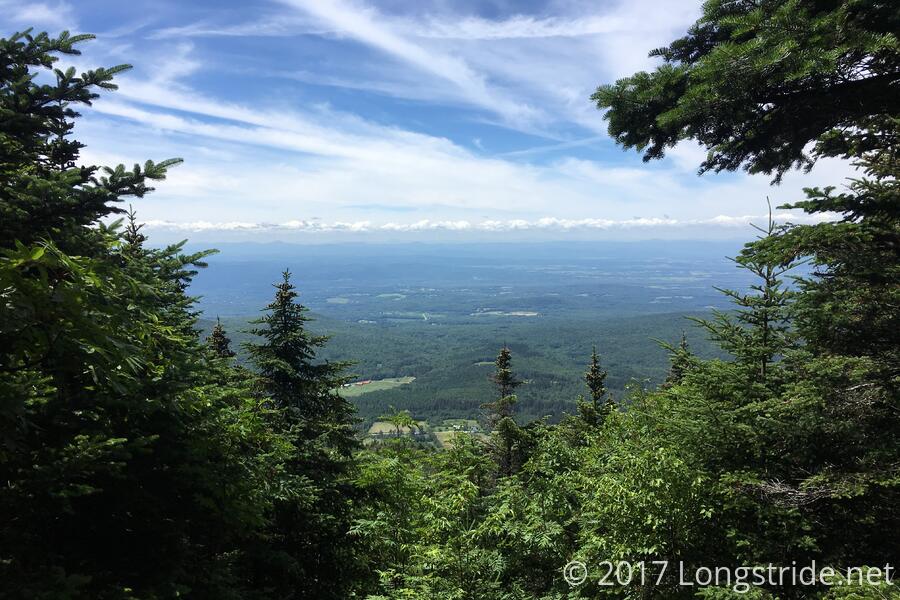 The pine forests of Vermont have especially reminded me of Maine, and today's mountains were no exception. Today felt very much like an easy version of Maine. (Add more steepness and rocks, and it'd have felt like the Whites instead.)

After crossing Gillespie Peak, the descent towards Sucker Brook Shelter was initially steep and rocky, though it eventually turned into a more gradual, though long, descent to the shelter, and I got there around 3, promptly taking off my boots and socks to dry them in the sun.

I pondered pushing forward to the next shelter, but my feet, after spending most of the day in somewhat wet boots, decided they were done for the day. The next shelter, Boyce Shelter, was 7.5 miles ahead, and as much as I'd have liked to move a little bit more forward, my feet just didn't have that much more in them today. Zippy arrived, dried out her shoes and had a snack, and then decided to push on, hoping to catch up with friends that were about ten miles ahead. Joe, who had been taking an afternoon nap, then emerged from his tent, and left to head to the next shelter.

The next several hours brought in several more hikers: Lucky 70, a 75-year-old woman finishing a section hike tomorrow at the next road crossing; Bear Bob (who had a bear chew off a pocket on his pack in Shenandoah) and his wife Slow and Steady (who had thru-hiked in 2013, and had the bug bite on the top of her head); and Iceberg, Charles, and their dog Dova. (Iceberg is completing a hopscotch AT and LT thru-hike.)

Tomorrow: If the weather holds up to the forecast excellence, it'll be a great day for hiking. The plan is 11.4 miles to the Emily Proctor Shelter, with a short side-trail to submit Bread Loaf Mt, on the New England Hundred Highest list. Depending on how early I get out of camp and how my feet feel, I might consider pushing ahead another shelter, to make getting into Waitsfield on Monday easier.