Fourteen miles today brought CareFree and I to our last full day in Georgia, as we continue heading north.

We got up around 8 am to find the tent mostly dry from the wind overnight. A fog filled the valley to the south, and the sun came up. It was still cool, damp, and humid, but it was looking like a much better day than yesterday.

Shortly north of Hatley Gap is a small stream the trail crosses. Last night, we were going to get water from there for cooking, but with the rain, and the fact that we had just enough to cook on hand, we skipped going the extra distance. This morning, with a several mile climb ahead of us and still enough water to make it to our first break, we didn’t get water from there as we passed, lightening our load for the morning.

After we left Hatley Gap, our first point of interest was Fowler Mountain. After summiting, the trail ended its several-day westward march and turned north, heading towards Tennessee.

We only saw three people today. One of them was just north of Double Hogpen Gap. He had no pack on, and so clearly came by vehicle on one of the several dirt roads in the area. The entire time we saw him, he was slowly walking down the trails looking for something in the dirt.

We took our first break at a stream after about five miles. Collecting water was a little tricky, since the easily accessible portion of the creek was mostly flat, and the short waterfalls were protected by Rhododendrons and thorn bushes. We managed, though. While we were eating, it got noticeably cooler, though that may have been because we were close to running water.

We continued on, climbing to summit Flat Top Mountain. Just before we reached the summit, we found a small patch of snow under the shade of a tree. It was unclear how long it had been there; it’s possible it could have been new from the thunderstorm a couple of days ago, or it could have been the last remnant of winter. 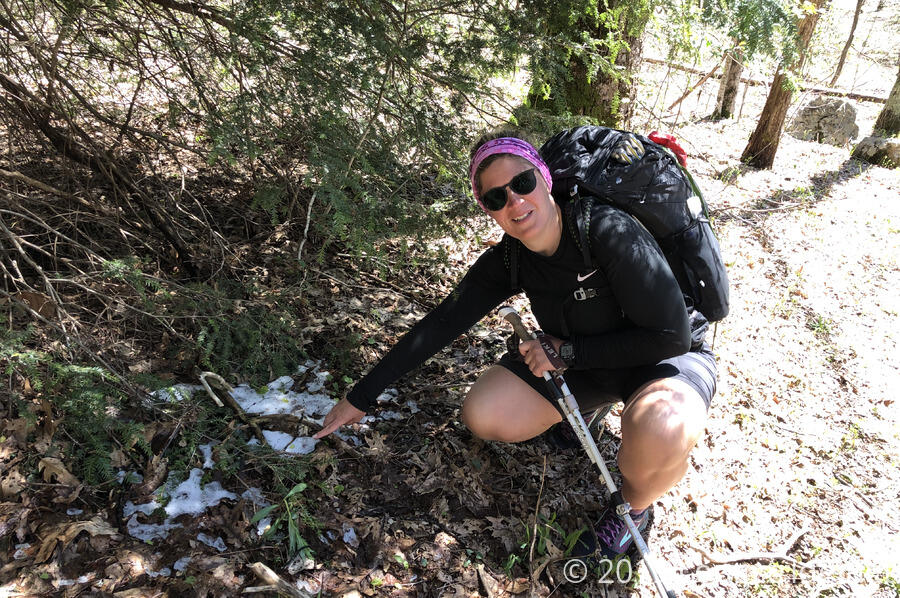 Flat Top Mountain contained the remnants of a building foundation, as well as a giant oak tree.

A few hours later, we reached a particularly interesting trail junction: the Northern Terminus of the Pinhoti Trail. The Pinhoti Trail starts in Alabama, on Flagg Mountain, the southernmost mountain in the Appalachians that is over 1,000 feet. Much like the BMT’s southern terminus, the Pinhoti northern terminus was fairly non-descript, just a sign marking the end of the trail. 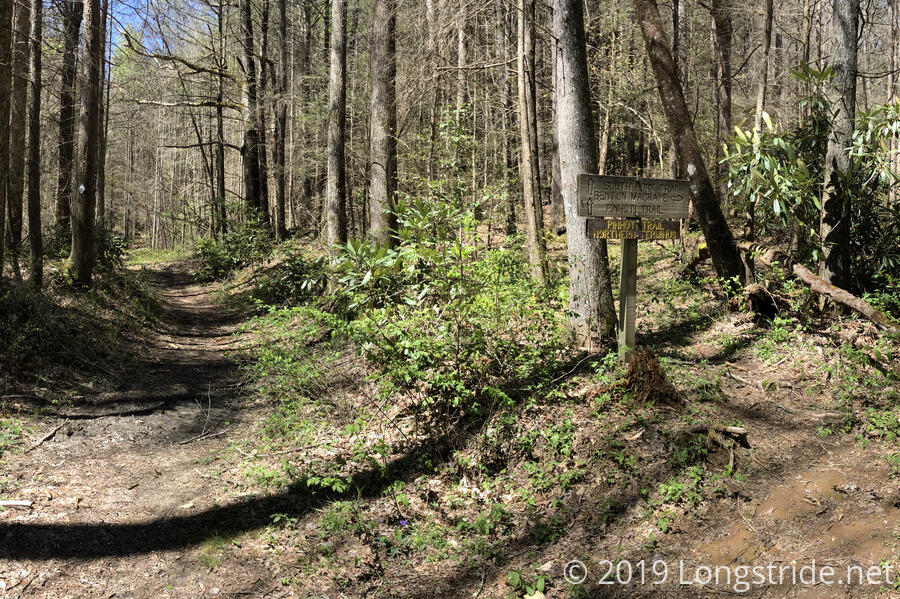 Pinhoti Trail Northern Terminus — The Pinhoti trail, heading south, goes to the left, while the Benton MacKaye Trail heads to the right.

About half an hour later, we saw our first snake on the trail. 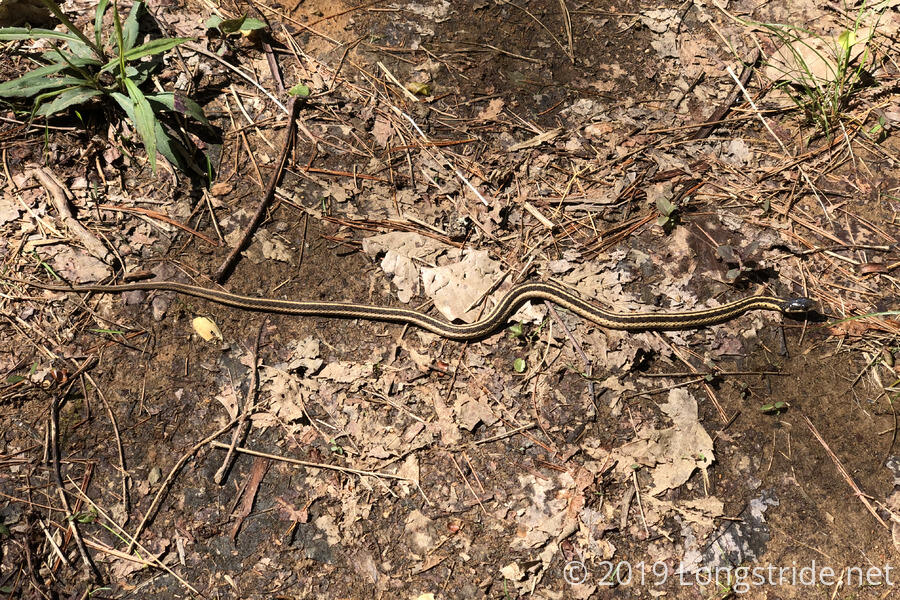 Shortly after, we saw two other people, driving in a truck down a forest service road the trail was routed over. The roadwalks are getting a bit much, but at least today’s were wilderness roads with almost no traffic.

Around 4:45, we reached our destination, a campsite next to the Peter Cove Branch of Jacks River, 14 miles from where we started the day. The most obvious thing we noticed when arriving was the disaster of a fire pit: someone had built a three-sided three foot high wall of wood, made out of relatively large logs, and then tried to set the whole thing on fire. Needless to say, they didn’t succeed in burning it all, and left quite a mess (and the business end of a shovel, but no handle).

For once, we arrived at a campsite and it wasn’t cold, raining, or late in the day, and we were able to sit out and relax for awhile before we set up the tent, got water from the creek, and cooked dinner. As the evening progressed and the sun went down, it grew cooler, and, being right next to a creek, substantially more humid. We’d probably have a damp tent in the morning, but, that’s a problem for tomorrow. 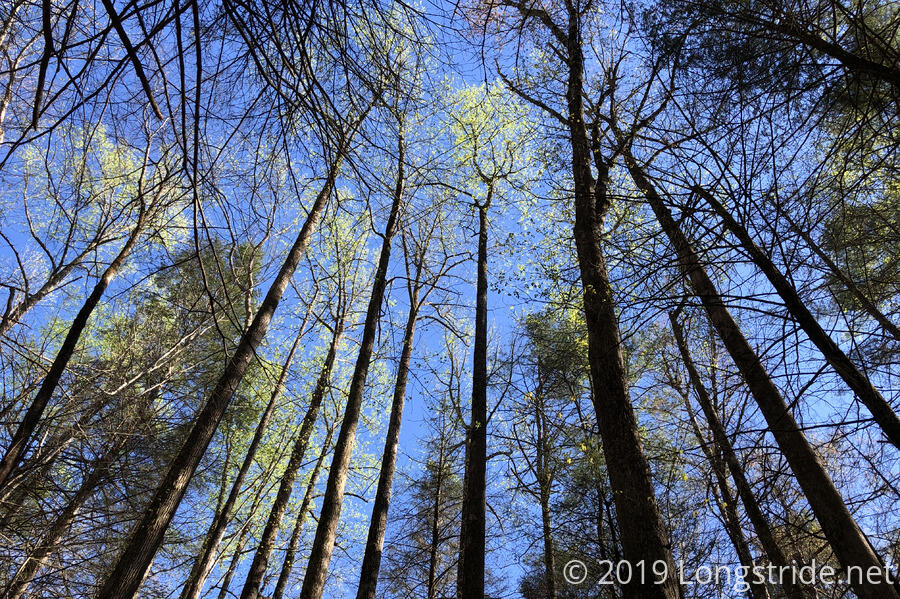