Today was our second-longest day on the BMT so far, 17.4 miles to a campground on the Ocoee River, and continued our streak of barely seeing anyone on trail.

The morning was cool and humid, with clear skies. We expected a good day of hiking, and we’d need it since we planned to hike almost 17.5 miles. We got up around 7:30, and managed to move fast enough to start hiking before 9 am. We crossed the creek near our campsite, and another just past it, and almost as soon as we started climbing, it warmed right up.

Our first mountain of the day was Hemp Top Mountain. After about a mile on trails, the BMT followed a nice roadbed for the rest of the way to the top of the mountain. For a long while, there was a view towards the west, though there were always trees in the way of getting a good view of the distant mountains. A short spur trail, unmaintained and overgrown, connected the BMT to the actual mountain summit, and we stopped there for a break, a little more than five miles into the day. The summit used to house a fire tower that has since been removed; all that remains is the tower’s anchorings and the foundations of its associated buildings.

After leaving Hemp Top, our next stop was Double Spring Gap, on the border of Georgia and Tennessee. Almost 83 miles since we left Springer Mountain, now it was time to leave Georgia. The sign at the border was quite old and worn; we could tell it said “Welcome to Tennessee”, though most of that was not visible from years of wear and tear.

Tennessee welcomed us with our steepest climb so far: a 0.8 mile 880-ft climb: nearly 1100 ft/mile. That easily rivals some climbs in the Whites on the Appalachian Trail for steepest climb. That climb brought us above 4,000 ft for the first time on the trail, and most of the way to the BMT’s first peak in Tennessee (and also above 4,000 feet), Big Frog Mountain. It was hard and slow, hindered by the afternoon heat and near-direct sunlight.

The Big Frog summit was the high point of the day, and after passing by, the trail began a long descent, eventually dropping over 3,000 feet to the Ocoee River by the end of the day. On our way down, the trail passed through two Rhododendron tunnels that provided a nice respite from the sun. 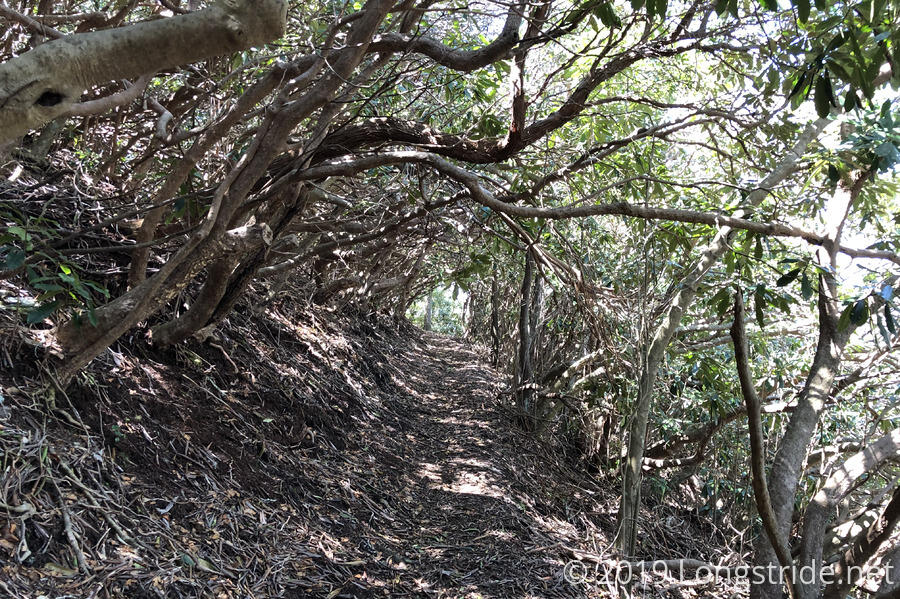 As we took a break on the back side of the mountain, we noted that we hadn’t seen a blaze for the BMT in about ten miles. It was unclear if this is because we entered an unsigned wilderness area, or if because the BMT followed other trails which were signed, and the blazes might be confusing to those hikers. 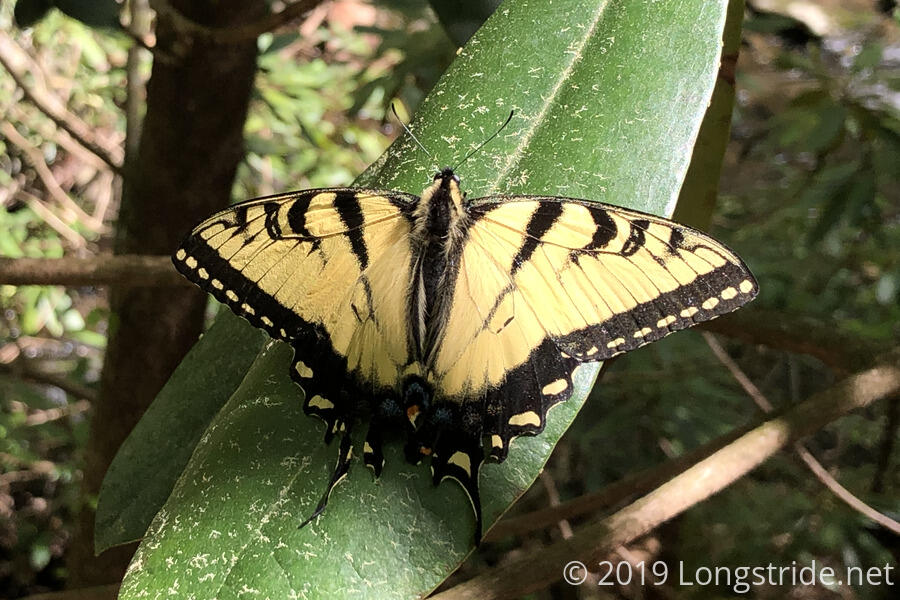 After a few more creek crossings (some of which we couldn’t cross and keep our feet dry, we took a short break so CareFree could get more water at the last water before the campground we were aiming for today, and so I could rest my feet.

As we got closer to the campground, the trail began following forest service roads of varying quality. The gravel roadbed was hard on our feet, but at least it was mostly shaded.

Eventually, we reached the Ocoee River, which appeared to be a dangerously fast-flowing rapid-filled river to be on. 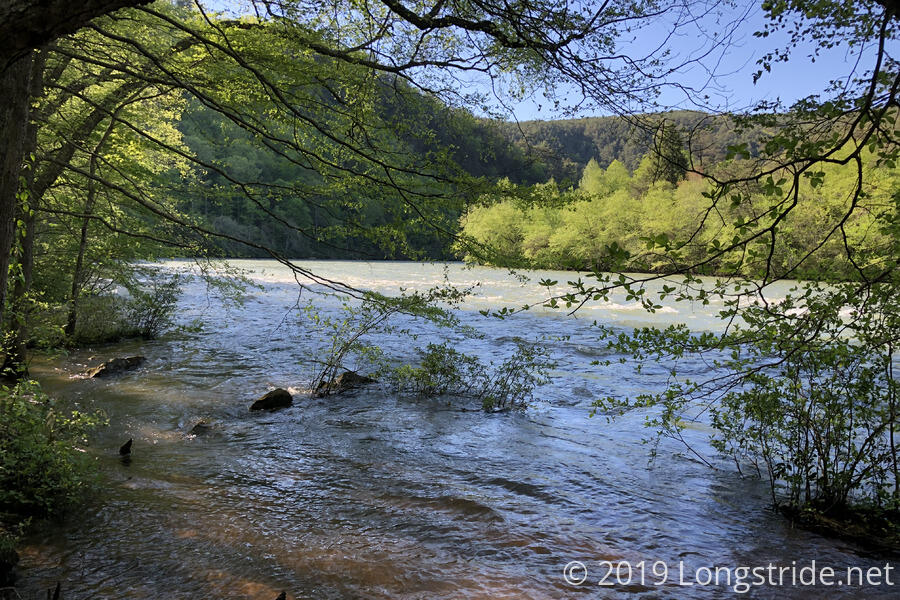 Shortly after, we arrived at our destination, the Thunder Rock Campground, and saw our first people of the day, car campers who had taken up a spot at the back end of the campground.

After a few minutes of looking, we found a campsite that wasn’t overly damp and still had a bit of sun we could use to dry out the rainfly when we set up the tent. (We had intended to get the rainfly out and let it dry off during our break at Hemp Top. Alas, we didn’t, and we didn’t do it at our later breaks in the day.)

Being a pay campground, I went exploring for a way to pay while CareFree set up the tent. As I walked through the campground, I found the pit toilets (which were clean and smelled not bad); washrooms that were closed to some unspecified plumbing problem; a bike wash station with potable water; and finally, at the entrance to the campground, the pay station. Paying was easy (someone, probably the campground host even left some $5s and $1s on top of the pole to make change with), except that the pay receptacle was sticky which coated my fingers (and the pay envelope) with goo as I tried to force it into the slot.

After we arrived at the campground, I was feeling pretty tired and sluggish. I probably didn’t eat and drink enough during the day — I’d prepared three sets of snacks (since we were going 17.5 miles), but only ate two of them because we only took two longer breaks. And with there being a lot of downhill, one often forgets to drink water, because it’s not strenuous in the same way that uphill climbing feels like a workout.

Fortunately, dinner was the cure for those ills. And with a picnic table at hand, it was a lot easier than cooking dinner while sitting on the ground.

After dinner, we walked across the campground to take another look at the Ocoee River. We had thought it was fast-flowing earlier, but the full extent wasn’t clear until now: a crude water flow indicator tied to a tree was being pulled to its greatest extent; relatively substantial waves were being induced by the flow; and the trees on the other bank of the river were partially submerged!

One thing we felt today is that the trail in Tennessee isn’t nearly as well maintained as in Georgia. There were more trees blown on the trail, fewer blazes, and the water crossings were harder to do and stay dry. That said, we’ve only been in Tennessee for half a day, so it’s unfair to judge just yet. There’s still a good way to go...