The first of two full days in Tucson, Arizona, today I visited Saguaro National Park and completed what I hope to be my last pre-hike chores.

I had two goals for today. First, hike somewhere in the desert to at least get slightly acclimated to the hot, dry conditions before starting the CDT. Second, go to the local REI and pick up fuel canisters to start the trail with.

Last night, at CareFree’s suggestion, we decided on a ten mile out-and-back hike to summit Wasson Peak in the Tucson Mountain District of Saguaro National Park, to the west of Tucson. As we were preparing to leave, I found that my water bladder was leaking from the top. On other trails, this might not have been too big a deal; if I didn’t fill the bladder fully up, the water level wouldn’t be high enough to leak out. But, with desert conditions for the first 750 miles of trail, I’m expecting to need all of my water carrying capacity. I added a replacement bladder to my shopping list.

We left Tucson, heading west, leaving the city behind and entering a vast, largely flat, expanse of land dominated by desert brush and cactus. Leaving the main road for a side road that took us the rest of the way to the park, we were surprised at just how green the plants were on either side of the trail. (Later, from a better vantage point shortly into our hike, we decided that the plants lining the road were so green because there was farms and irrigation on either side of the road.)

Our hike was great. We began from a trailhead maybe a half-mile down a dirt road, and followed the Hugh Norris Trail up a moderately steep but well-manicured trail with (hundreds of) stone steps. As we climbed, the extent of the saguaro forest became clear. A sea of cactus stretched for miles. Overhead, vultures circled, looking for something to feast on. (It wasn’t going to be us, of course.) 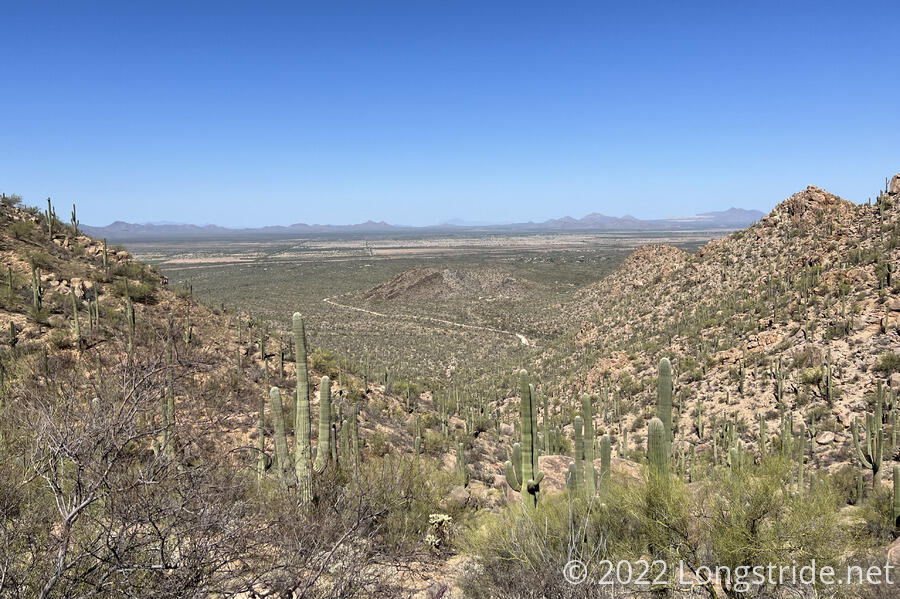 A Sea of Saguaro

Despite it being hot outside, and absolutely no shade, there was just enough breeze to keep it from being uncomfortable. If we were sweating (which we had to have been; hiking uphill is a workout even if we weren’t carrying heavy packs today), the wind and lack of humidity carried the moisture away immediately. 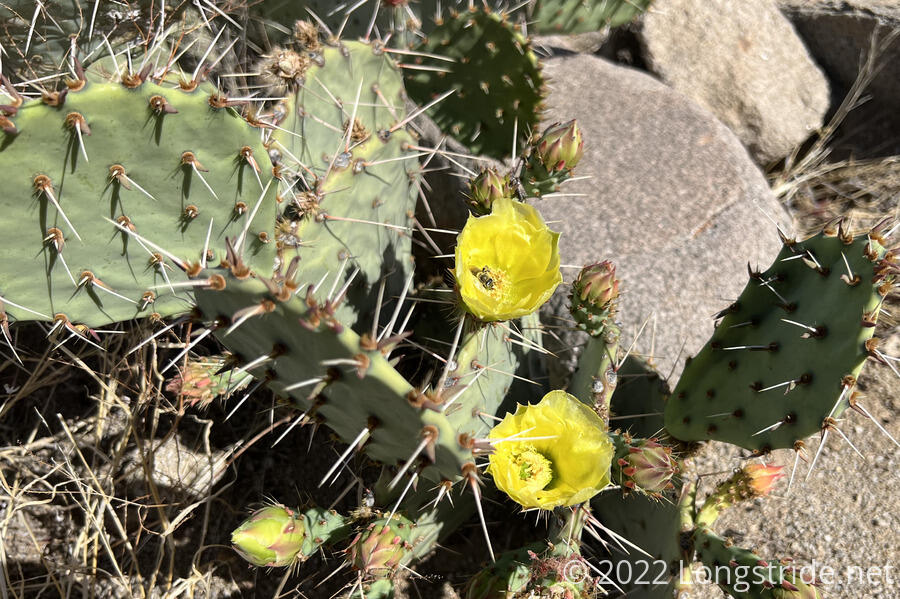 On our hike to the summit, we passed four or five other small groups of day-hikers. There were more people than we expected, since there were only two other cars at the parking lot. Later, we realized that at least some of them had to have come from other trailheads.

It took us a little under two and a half hours to hike the five miles and 2,500 feet up to the summit of Wasson Peak, the highest point in the Tucson Mountains, one of the five mountain ranges that surround Tucson. As we climbed, the temperature slowly cooled, and the wind picked up occasionally, especially once we reached the summit, where there was a continuous and somewhat strong breeze.

We enjoyed the panoramic views of the surrounding area, and had a short snack break.

We returned the way we came, passing more people on our way down than we did on the way up. Because it was an out-and-back hike, even though we had a different perspective of the trail and landscape on the way back, it felt kind of boring. We’d already been there, and there wasn’t much of anything new to see.

The trail was very well maintained. We were also pleasantly surprised at how clean it was, too. We found only one piece of trash on the trail (which we felt obligated to pick up and pack out), and absolutely no toilet paper.

After leaving the park, we stopped at an IHOP for lunch, and then headed to the REI. I got a new water bladder, but they were out of 8 oz fuel canisters. Fortunately, the Dick’s Sporting Goods next door had plenty.

Our last stop of the day was Target, to pick up snacks and soda for tomorrow, and something light to eat for dinner tonight.

Tomorrow: we go hiking in Saguaro National Park on the east side of Tucson.