Today’s hike was dominated by a long roadwalk that brought me to my second trial town, Silver City.

I woke up at 5:30, with sore legs after yesterday’s long hike. While I was eating breakfast and slowly packing up, some cows started mooing outside my tent. Not able to see the cows from wherever they were standing, I tried to hurry up a bit since I didn’t want nervous or impatient cows hanging around. The mooing apparently came from two calves, who got tired of waiting and ran across the road.

I started hiking about 20 minutes after sunrise, to cool temperatures. It was nice out. Perfect weather for a roadwalk (or a hike). 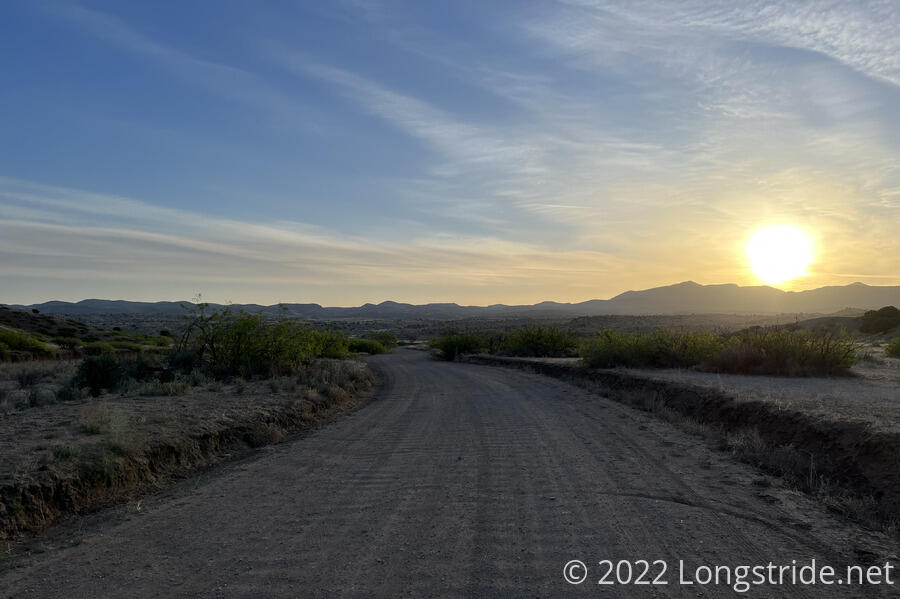 Having already hiked most of the canyon yesterday, it didn’t take too long before I exited the Gila National Forest, and the road I was on quickly ended at US 180.

US 180 wasn’t terribly busy, but there was a steady stream of cars coming from both directions, and I was glad there was a relatively wide shoulder, because I was going to be on the road for a long time: 13 miles, four and a half hours. 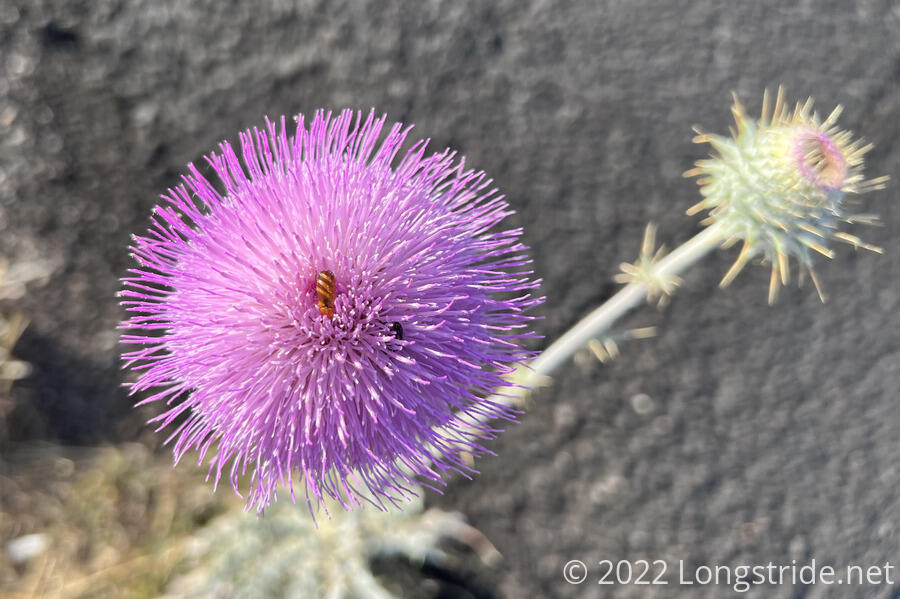 Flower Along the Road

Truth be told, the roadwalk was not very interesting. There was occasional scenery. I passed at least two (but probably many more) cow pastures. There was an “leisure adult living” place that looked more like a trailer park. I passed a sign for the Continental Divide, the first time this hike I’ve known to cross it. I tried to keep count of the number of cars that passed by to keep it “interesting” (160 in the first 75 minutes), but I stopped when I took my first break, and then started playing podcasts, since they were far more interesting than the road. 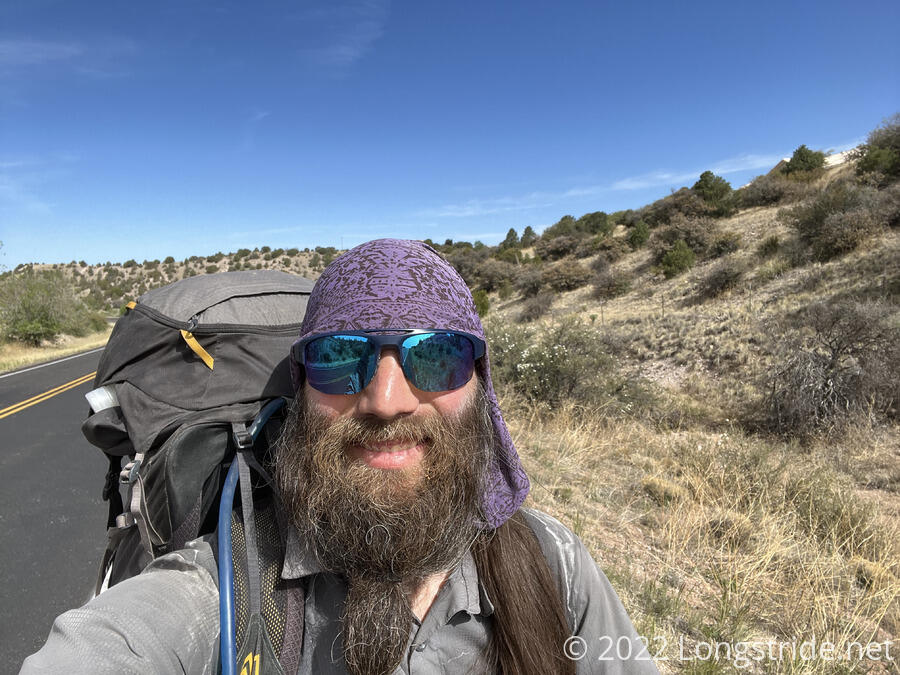 I stopped for three breaks; the road surface was hard on my feet (which were still a little sore from yesterday’s hike) and I needed to get my shoes off on a regular basis to keep them happy. After the sun got higher, the road also quickly heated up, which made it even more uncomfortable to walk on.

With a reservation at the Triple Crown Hostel, I turned off the CDT a early to make a beeline for the hostel, getting there at quarter to noon. However, the hostel had a 2 pm checkin, which I didn’t know ahead of time, or I’d have just followed the official trail which would have put me closer to the center of town, and closer to food, which now became my priority.

I went to the nearest restaurant I could find, Grinder Mill, a burger joint. I stayed there for an hour and a half, running out the clock on check-in. Shortly before I left, a woman in the restaurant asked me if I was one of those people she kept seeing walking along the highway. I said yes, and why, and explained that if there were any other route that didn’t involve a road, we would all happily take it.

Returning to the hostel, I got checked in and made a beeline for the shower. Once out, I ran into Enygma, who I recognized from running into him a few times on the PCT aim 2018. He made it past the Sierra, and then had to get off trail due to injury.

Pale Ale, Izzy, and I walked to the (relatively) nearby Food Basket supermarket to get our resupply for the next segment of our hike. (I got most of what I wanted, but declined to get Clif Bars, since they were only selling singles, rather than boxes, so it was somewhat expensive, instead substituting some Kind bars instead). Izzy got ice cream drumsticks, and I was immediately jealous and wished I’d gotten some of my own. On our way back, we discussed Izzy’s new trail name, and they settled on “Sprouts”, on account of them carrying a container of growing alfalfa sprouts.

On the TV, we put on the start to the second season of Netflix’s Russian Doll, and paused halfway through the episode, deciding it was a bit much to watch right now (but far enough in that I think I see what this season’s gimmick is). We switched to The Great British Bake-Off instead.

Later, we ordered pizza, and Pale Ale and I went to pick it up. We got a Hawaiian pizza, and a jalapeño and meats pizza, both of which were excellent. The Hawaiian pizza had tomatoes on it (which I don’t particularly like); Sprouts was happy to take them with a zeal I’ve rarely seen before.

The rest of the evening passed largely uneventfully, and I went to sleep, intending to sleep in tomorrow for my first zero day this hike.