Reaching the end of the “Butte Express” alternate, I returned to the CDT, preparing for day in town tomorrow.

The smoke from yesterday still filled the air, thicker than before. Rising through that smoke, the sun was a deep reddish orb, barely able to cast shadows. It was, really, one of the best sunrises I’ve seen on trail. 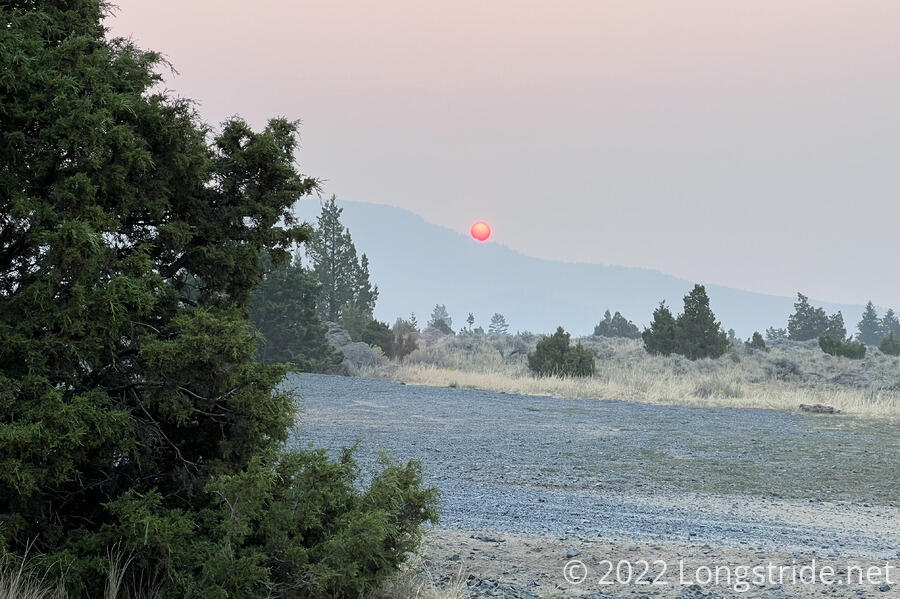 Sunrise — The sun rises through a layer of smoke.

Last night, Fuck-It sent Stumblebee a message saying that he is staying with someone who threatened him with a gun. Naturally, this was a bit worrisome, but he ratcheted up the worry when he sent another message giving his address “just in case”, and then stopped responding to messages. So, Stumblebee, Bass, and Wild Man are heading back to town, to somehow “rescue” Fuck-It; Recon, Sprouts, Velveeta and I are pushing forward, and I guess we’ll meet up in Butte tomorrow somehow.

I continued along the gravel road from yesterday, almost immediately leaving BLM land and re-entering national forest. I passed several campsites, most filled with RVs. With it being Labor Day, there was a bit of traffic on the road. A long weekend was nearly over, and campers were on their way back home. After about an hour and a half from Four Corners Trailhead, where we camped, I reached Halfway Creek Trailhead, and a road that led west, towards a lake that would have probably had to have been our source of water last night if we hadn’t been able to get water from the other campers. 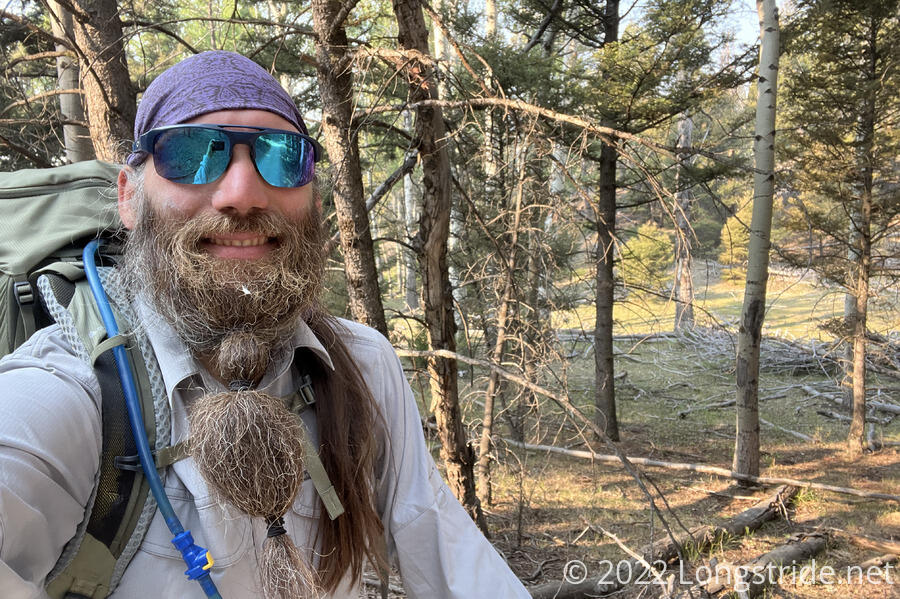 Eventually leaving the gravel road, I began following a series of dirt roads that wound their way north through the mountains, covered in a nice pine forest. Above the trees, I occasionally could see smoke to the south, and clearer skies to the north. Sometimes, a breeze blowing from the north gave hope that maybe the smoke would be pushed away from where I was going, but throughout the day, the smoke never really seemed to move.

Shortly after turning onto the Nez Perce Trail, named for an indigenous tribe, and possibly the Nez Perce National Historic Trail (which, though “nearby”, does not actually seem to follow the trail I was on), I saw my first CDT marker since the day we turned off on our alternate. I wasn’t back on the CDT yet, this was yet another marker from an old trail alignment.

Briefly leaving the forest the trail crossed a marsh along a nice boardwalk. 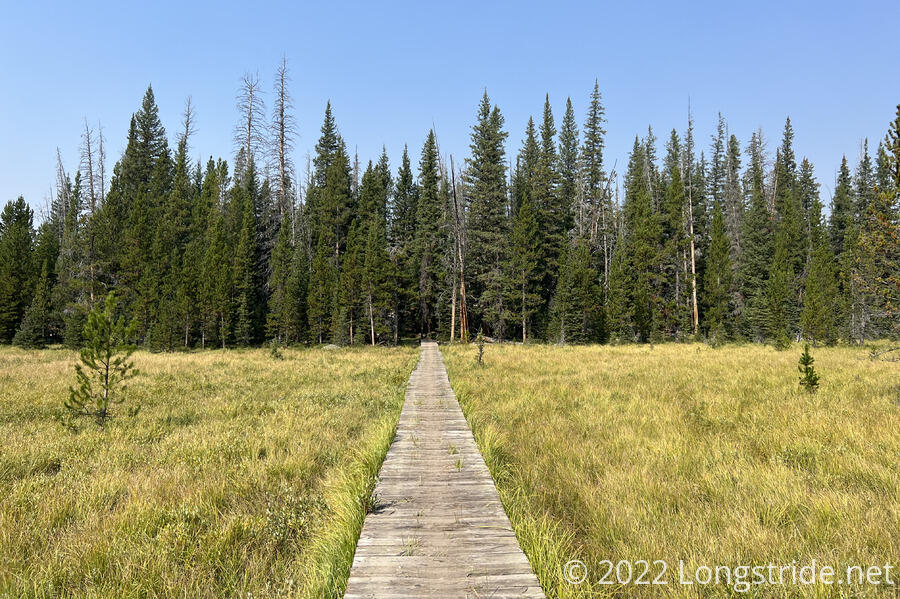 A Boardwalk Through a Marsh

There were also more cows on the trail. I wound up “chasing” two different sets of cows for a couple of miles because they refused to leave the trail when they had easy opportunities, instead eventually crashing through thickets to get away.

Shortly before 2, the Nez Perce Trail joined with the CDT, and I stopped for a break at the intersection. A bit tired, I leaned up against a tree and tried to take a bit of a nap. I’d passed Sprouts, Velveeta, and Recon earlier since our break styles don’t really mesh, and since we were all aiming for the same place for tonight — a trailhead about five miles ahead — to make for a short day into Butte tomorrow, it didn’t make sense getting there way before everyone else.

After about an hour and a half, I started to get a bit antsy, and continued north.

Back on the CDT

Now back on the CDT, just shy of 500 trail miles from where I departed a week and a half ago, I felt a bit relieved. The alternate I took was only about 180 miles (even shorter than expected!), about 320 miles shorter than the official trail, which easily saved two and a half weeks. With about 430 miles left to go to Canada, it’s still possible to make it there by the end of the month.

Late in the afternoon, a trio of motorbikers passed me, heading towards the trailhead. One of them stopped to talk with me; we’d passed each other sometime this morning, and now, a good 15 miles later, he was surprised to have seen me cover so much distance.

A little while later, I spotted a white styrofoam container next to the trail, labeled “CDT”. Next to it was a gallon jug of water; inside was stocked with cans of root beer and two other kinds of soda, a spool of orange tape and a note that it’s hunting season, and a log book indicating the trail magic was from a hiker named Weatherman. The cache had been recently refreshed; the soda was still cool to the touch. (Thanks so much, the cold soda was great!)

Recon passed a little while later, almost missing me sitting next to the trail, and entirely missing the trail magic until I pointed it out!

Down the hill a bit from the trail magic, we crossed over Nez Perce Creek, and arrived at a gravel parking lot on Nez Perce Lake Road, where we planned to camp. Recon and I, shortly followed by Velveeta, sat down to cook dinner.

We tried to keep a lookout for Sprouts, but after it’d been far longer than it should have taken for them to arrive, Velveeta got a message that they were about a mile down the road, towards town. Apparently, we’d missed each other, possibly because the three of us were sitting partially obscured by a small bulldozer.

We set off down the road, eventually spotting Sprout’s blaze-orange hat hanging from a tree, and set up for cowboy camping. (It was a little tight for tents, and the weather was still very nice out.)

We got word from Stumblebee that Fuck-It, in a surprising turn of events, had gone to a shooting range with the guy who had threatened him with a gun, and then gotten a lift to Ennis, where he is staying with a trail angel for a few days. Fuck-It will meet us in Helena; the rest of them are in Butte now.

Our plan now is to leave our campsite around 7 tomorrow morning. Once we get into town, we’ll get breakfast at a restaurant suggested by Stumblebee. I’m also looking forward to Pizza Ranch, an all-you-can-eat pizza buffet. (Velveeta has been talking about it since Yellowstone. The last time I was at a pizza buffet was probably early on the Appalachian Trail.)