Half a day of hiking brought me to Helena, the capitol of Montana, where I met up with Fuck-It.

Very cold overnight, my tent had a layer of frost, and I didn’t sleep all that well. When I get the opportunity, I’m definitely going to look into a sleeping bag liner, or something else to keep me warmer at night.

Shortly after 7, Guru made Dino and I pancakes. The three of us continued to talk until almost 10 am before Dino and I finally hiked out, the rest of my group still nowhere to be seen. (Such a late start did not bode well for getting chores done in town by a reasonable time today, but anything was still possible.) 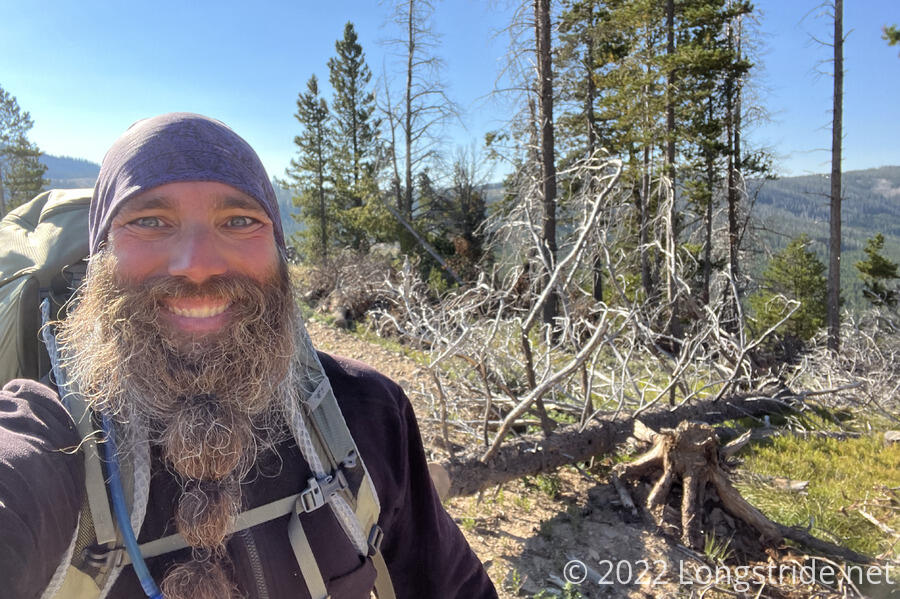 The first four miles of the day were along a dirt road surrounded by trees, with little in the way of views. In conversation with Dino for much of that time, I really didn’t make much notice of the trail at all.

The first landmark of note was trail magic: a cooler filled with cans of sodas, from Peter and Jackie, whose daughter hiked the PCT in 2021. We stopped for about five minutes to each drink a can, and then we continued down the dirt road.

Eventually, the road began to peter out, and the trail left the road, continuing north where the road turned west. The trail continued mostly through forest, but a couple of ridgetop meadows still gave views, with mountains in the distance obscured by haze from whatever fire is currently burning.

Haze from fires builds after yesterday’s rain and snow.

By 2:30, we arrived at MacDonald Pass, shortcutting a dirt road switchback from the trailhead parking lot to the highway by following faded ATV tracks down the hill. The hike was quite a blur; in twelve miles, Dino and I basically only stopped for five minutes at the trail magic, and I didn’t remember much at all about the trail.

Like the roads around West Yellowstone and Whitehall, this was also a very fast road, with a speed limit of 70 mph, but at least there was a large pull-off area, and it only took ten minutes for Dino and I to get a ride to town. Our driver, Fred, gave us a few ideas of places to go for food, and we settled on the Mt. Ascension brewpub.

Now that I had cell access again (after not having any at all yesterday), Fuck-It got in contact with me. He’d made it to Helena, and was at the McDonald’s. (I expected this; McDonald’s seems to be his favorite American restaurant.) He said that Stumblebee knows someone in town that we can stay with, but she wasn’t responding to messages. (Probably, she was out of cell service.)

As it got later in the afternoon, with Stumblebee still not responding, I decided to split a room with Dino. Once we got checked in, we invited Fuck-It as well.

After leaving our company outside of Whitehall, Fuck-It had quite an adventure, which he told us of in great detail. The short version is, he got picked up by a PCT 2017 hiker, who dropped him off at Cardwell; three minutes later, he got a ride from a PCT 2019 hiker who got him to US 287, the road that goes to Ennis. After spending several hours in the hot sun, someone stopped to give him a ride to Harrison, the next town town the road. That began his adventure with with a gun-loving misogynist and his wife; he stayed at their place that evening. The next morning, they offered to give him a ride the rest of the way to Ennis, and stopped along the way to offer Fuck-It a chance to shoot one of the guy’s many guns. Once in Ennis, he met up with a trail angel who’d given him and Wild Man beers and soda, and stayed with her for several days, trying to rest as much as possible to take pressure off his feet. He also met up with Rockhound, and got dropped off at the McDonalds by the trail angel, who really wanted to be involved in his CDT adventure.

He’d been at the McDonald’s for six hours before joining us at the hotel. When we went back to the McDonalds for dinner, a new sign had been posted, limiting guests to a 30-minute stay.

I had meant to do my resupply at some point, but having been into conversation with Dino and Fuck-It for most of the day got in the way of being productive. (Still, it was good to see that Fuck-It seemed to be in an improved state, and was definitely in good spirits.) I’m still not planning on a zero tomorrow, but I definitely won’t be leaving anywhere near as early as I’d planned.