Bill and Terry made us a fantastic breakfast of sausages, bacon, pancakes, and fresh fruit, and we prepared for departure to the trail.

Stumblebee is not feeling great, so to prevent injury and ensure she’ll be able to enjoy the final two sections of the trail — the Bob Marshall Wilderness, and Glacier National Park, she and Bass will take a week off and meet us in Augusta. Flame and Waves decided to join us northbound to Lincoln so they could hike with Recon. Needing to resupply, they and Wild Man went back to town while the rest of us prepared to head back to the trail.

Preparation including packing out a significant amount of box wine that was purchased yesterday. I wound up with about a liter in one of my extra foldable water bottles. 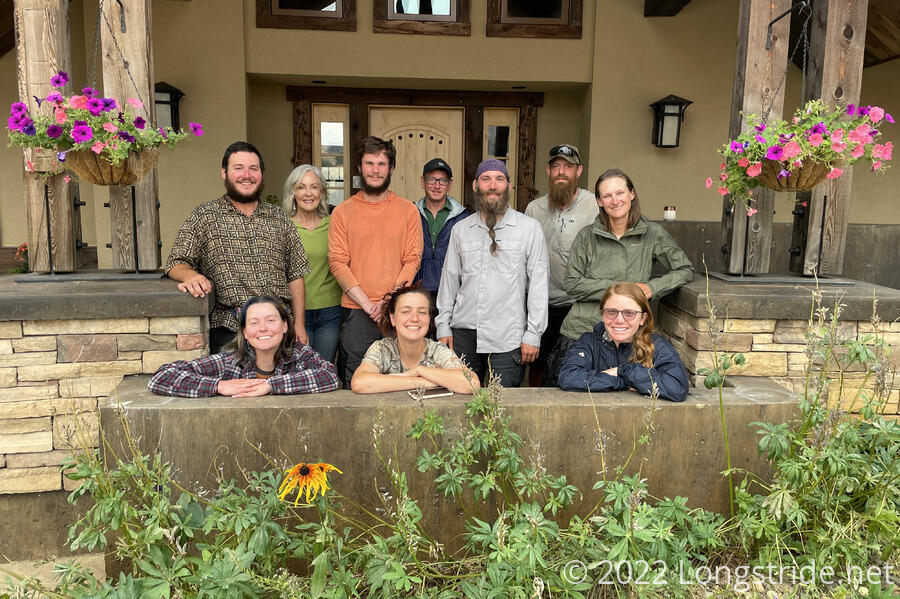 Terry gave us a lift up to the trailhead, making it halfway up to the pass before I realized I’d left my sunglasses at the house and we needed to go back to get them.

The smoke from the last several days has gotten even worse, dimming the sun and casting a reddish glow over everything. 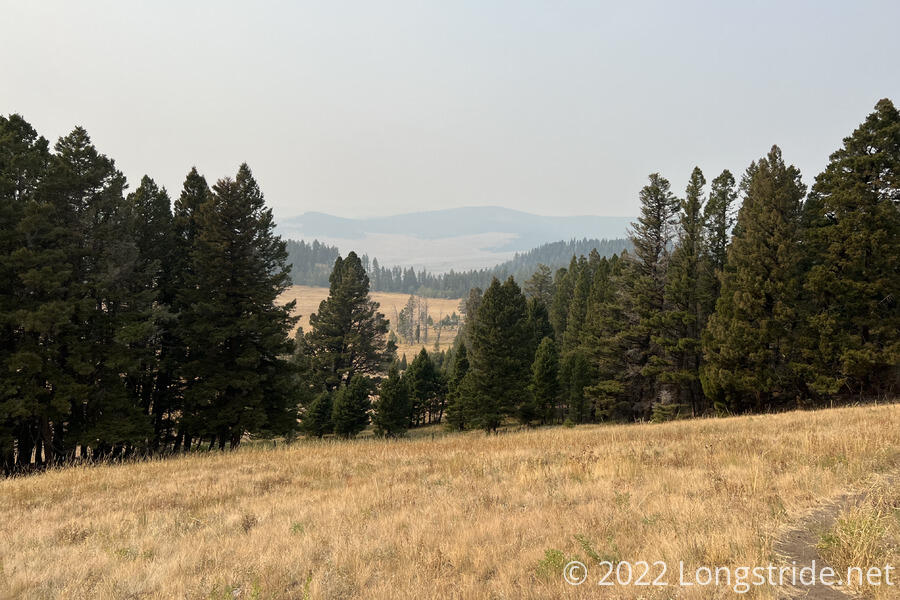 From MacDonald Pass, the trail proceeded along the highway’s shoulder for three-quarters of a mile, turning off onto a dirt road at a Montana Department of Transportation maintenance depot and parking area. Most of the rest of the group, not compelled to have a continuous footpath, got dropped off at the parking area to continue north from there. Wanting a continuous footpath, though, I dropped my pack there and had Terry take me up to MacDonald pass, and I walked back along the highway, picked up my pack, and continued down the dirt road.

From the highway, the dirt road took a moderately steep path, climbing along the side of a mountain, with a few switchbacks thrown in to get the trail up to the ridge. Forested, the trek up the mountain was fairly nondescript, until reaching a clearing near the summit, where several antennas and cell towers had been installed.

I briefly diverged down a side road to bag the actual summit of the mountain, “Peak 7215”, in the woods just to the north of the clearing around the radio towers, and then cut back to the ATV trail that led away from the clearing, into the woods. Just barely into the woods, I caught up with the rest of the group, taking a break alongside the path. A bit to my dismay, Velveeta had picked up a small portable speaker while in town, and he and Recon were using it to play music. (Somewhat quietly, at least, I didn’t have much trouble hearing the rest of the group talk.)

Dyno caught up with us, and sat with us for a little while, but we were waiting for Wild Man, Flame, and Waves to arrive, so we were there for an hour after I arrived before we continued on down the north side of the mountain. Fuck-It took off before the rest of us, wanting to be able to go at a slower pace to not further injure his feet.

About forty minutes later, just before crossing a dirt road, we arrived at a water cache, and took the opportunity to fill up. There were limited good water prospects for the rest of the day — just a creek that had a dead cow nearby, which we were keen to avoid.

Heavily laden with food, water, and wine, I trudged on, following the trail across the road and through a clearing. Reentering the forest, the trail passed by a ruined cabin, and a little later what appeared to be the remains of a wooden railroad trestle.

Ruins of an old railroad trestle.

Exiting the forest again, the trail joined a dirt road through a cow pasture with a few cows. A few salt licks were scattered around near the road; some of the cows were enjoying one of them. On the other side of the pasture, the trail left the road, cut through a forest, and briefly joined another dirt road. A very large sign warned of a “high volume of tree mortality resulting from a mountain pine beetle epidemic”, and warned of an elevated risk of falling trees. The sign felt somewhat panicky, because it was pretty clear that there were lots of dead trees in the area, but I guess lots of visitors are oblivious to the dangers of backcountry hiking. (If an area criss-crossed with dirt roads and cow pastures can really be considered backcountry).)

At a road junction, we stopped for another break. Taking advantage of the network of roads in the area, and also wanting to be not near a dead cow near the trail, we opted to take a shortcut. Instead of following the CDT up one dirt road and along the ridge, we instead opted to follow a dirt road further to the west of the trail which will save us about two miles and a bit of elevation gain. We might miss some views, but we’ll be happier with the shorter distance.

As the sun began to sink towards the horizon, it began passing through thicker and thicker clouds of smoke. The red glow that suffused over everything deepened, and the sky took on an eerie otherworldly quality. 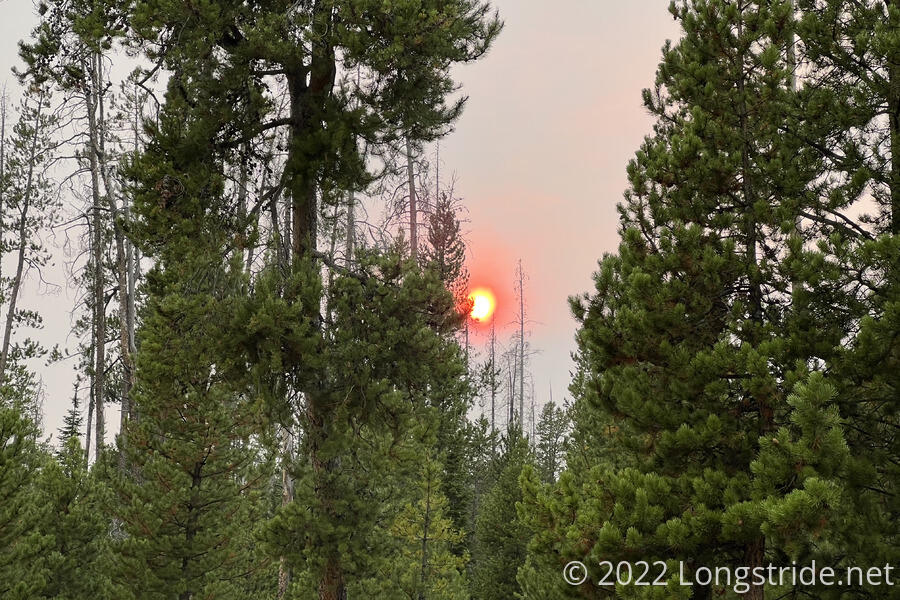 Dust in the air gives the sun an eerie red glow.

We’d initially planned to camp at a flat area next to the road near a creek, but private property signs made that a bad idea. After topping up on water, we continued to follow the road uphill, re-entering the national forest and began looking for a campsite with enough room for seven of us. (We’d not seen Fuck-It since he went ahead, and given that the shortcut wasn’t really discussed beforehand, apart from a general agreement that we would be open to such things in the interest of making our end-of-the-month target for Canada, we guessed he probably stayed on the official trail, and we’ll run into him tomorrow.) We eventually found a flattish area near a bunch of fallen and rotting trees that made for a workable, if not entirely comfortable, campsite.

I got my tent up and started cooking dinner about 25 minutes before sunset. We had a good time with the wine we’d packed out; we had three different kinds of wine — a white and two reds — that got shared between everyone.

A bit after sunset, we were surprised by a guy walking down the road, shaking what seemed like a can of dog food, and possibly spilling some. We weren’t clear on what he was trying to do; my first thought was perhaps he thought that making noise would scare away animals, but actually dropping food on the ground didn’t seem wise in grizzly country.at least 20 miles.