An unexpected fire detour, and lucky timing for an unexpected ride brought me to Augusta, the penultimate trail town, and gateway to the Bob Marshall Wilderness.

There was a bit of frost on my tent this morning, but nothing like yesterday. Slightly worrisome, though, was that my battery pack was nearly completely discharged. I didn’t get either my phone or watch charged anywhere close to my normal baseline (90% — the last ten percent to “full” is somewhat wasteful). Velveeta also ran his battery pack out as well, so neither of us were in a really great position when we departed camp.

Although camped next to a creek, I took less water than usual in an attempt to keep the weight down; both to make my ankle less unhappy, and to hopefully let me go a little bit faster, so as not to run out of power before getting to town.

Leaving camp, I continued to follow Welcome Creek uphill, though another valley ravaged by fire. There wasn’t much in the way of views on the way up to the high point of the day, Straight Creek Pass. Once across the pass, the trail followed Straight Creek downhill. To the west, a view opened up as the trail passed in front of Half Moon Creek, and the steep-sided Scapegoat Mountain stood in the distance, with snow on its eastern face. As cold and wet as it’s been the past few days, I assume this is fresh snow and not glacial snow, but it did instill me with a bit of urgency. If there’s snow here, there’s likely to be snow further north. 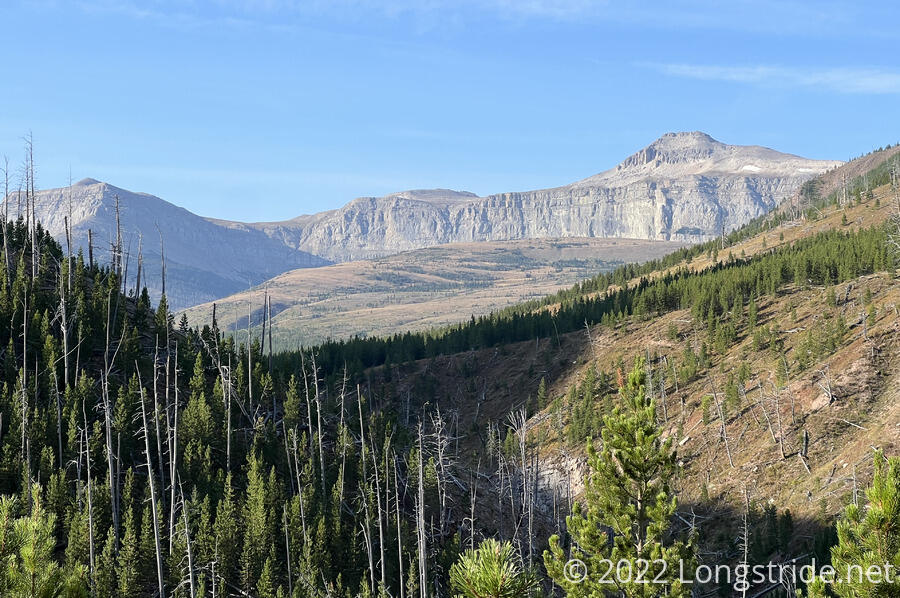 The steep-sided Scapegoat Mountain stands in the distance, with snow on its eastern face.

The trek down the valley was nice, though views were limited. To the west, the rock making up the side of the valley was exposed, showing a long run of stripes, what seemed like the scars of a glacier grinding against the rock. (The valley seemed a bit more V-shaped than U-shaped, though, so it may not have been a glacier, but rather just layers in the rock.) 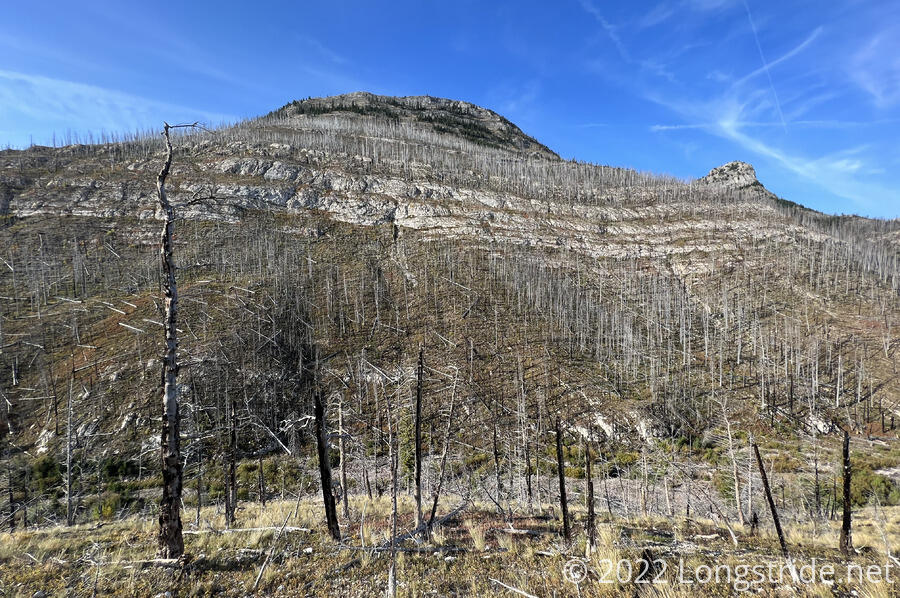 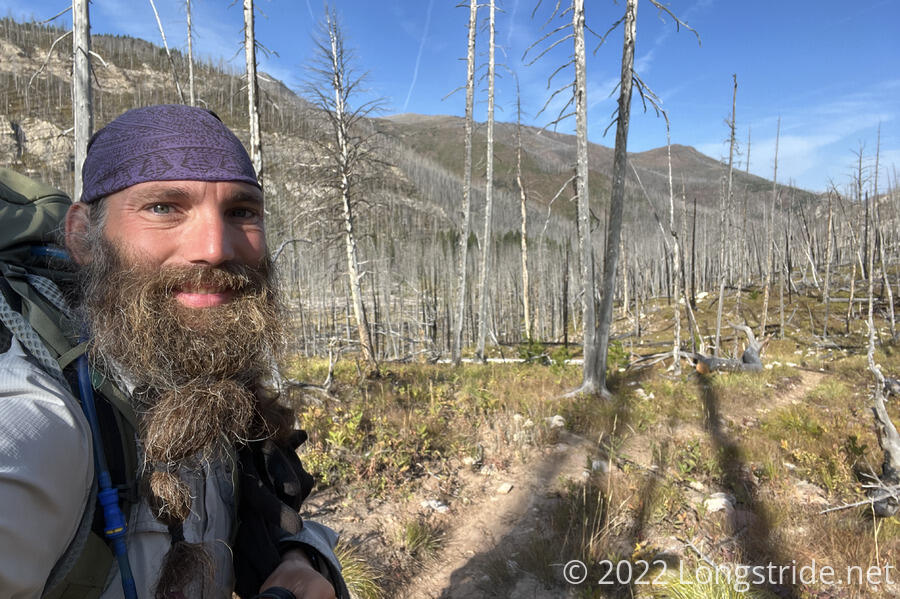 I stopped for a break at nice campsite near one of Straight Creek’s tributaries, a little before the trail junction that would take me across Straight Creek, up to Elbow Pass, and down the next valley over. 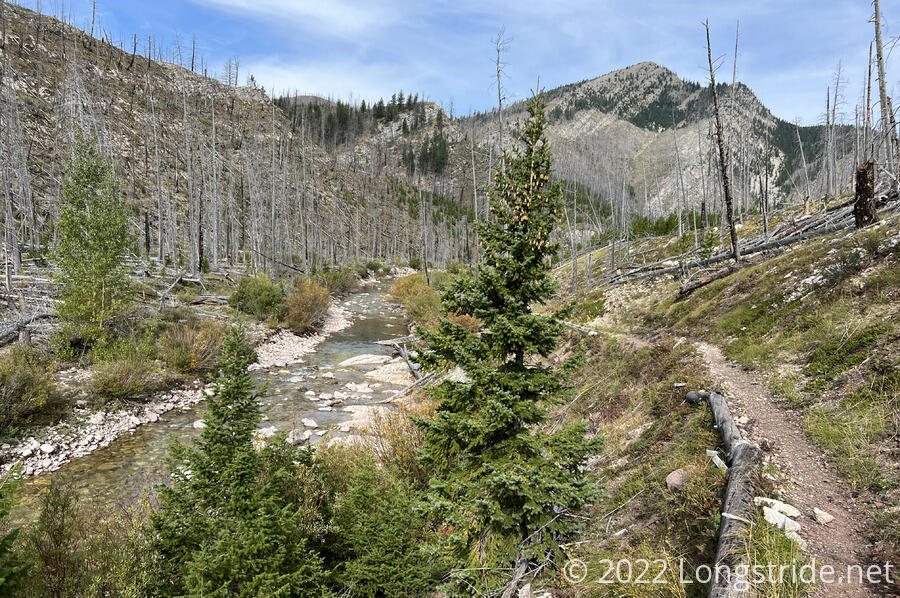 However, once I actually got to the junction, I found a sign posted, closing the trail due to the recent Ursus Fire, currently burning to the west. An alternate route was provided, continuing to follow Straight Creek down its drainage to the Straight Creek Trailhead, and then via road to reconnect to the CDT at Benchmark Trailhead, where I’d expected to end the day. Conveniently, this alternate is somewhat more direct, about three miles shorter, and skips the climb up to and down from Elbow Pass. (I knew from comments in my trail guide that there was a fire, and there had been a closure, but they were unclear as to whether the closure was still in effect.)

Jogging to the east a little where Straight Creek cut through a ridge, the creek’s valley widened considerably, but the views were still limited, and full of burned trees.

I passed two horseback riders, who were incredibly keen on taking photos of hikers, and asked a lot of questions. They gave off a bit of a creepy vibe, because they were very obviously taking pictures of me, somewhat up-close, with an expensive camera, without asking, and while holding the camera in the way one might if they were trying to subtlety take pictures without the subject being aware, except that that is basically impossible when one is sitting on a horse.

They’d seen Wild Man and Velveeta earlier, Velveeta being only about a mile ahead. They commented on how quiet he was (true, Velveeta’s not the loudest or most extroverted hiker I’ve met), and how small his pack was (also true; Velveeta later told me they asked him how he was going to make it when he didn’t have everything he needed; he responded that he did have everything he needs).

Just after passing the horseback riders, I entered a forest, and continued to speed along above Straight Creek. Occasional breaks in the trees gave views to the water, and occasional small waterfalls along its course. (I wondered about its name; the creek was hardly straight.) 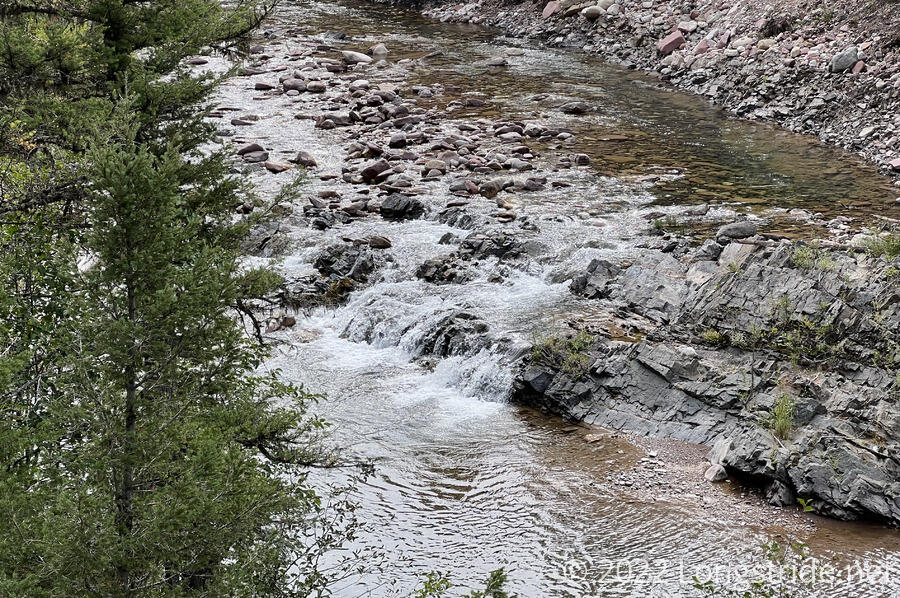 I caught up with Velveeta, and joined him briefly for a snack, but didn’t linger long because I wanted to get to town sooner, rather than later. A nearby sign marked the exit for the Scapegoat Wilderness.

Most of the trail tread in the forest was great, though there were a couple of places where the trail was narrow, loose, steep dirt next to a steep drop to the creek. I wondered (which Wild Man later also verbalized) how the horses even safely made it up that stretch of trail.

I reached the Straight Creek Trailhead just before 2 pm, and after spending a couple minutes reading one of the signs there, followed a dirt road heading to the “main road” through the area. Seeing a car stopped on the road, with its trunk open, I quickened my pace, hoping that I might get there before they leave, and possibly get a ride to town. The trailhead is in the middle of nowhere, nearly at the end of a dirt road (Benchmark Trailhead, a mile further up the road, is the end of the road). With no cell reception, I’d be at the mercy of whatever little traffic was here to.

I’d made it to the road just in time to get a very lucky ride. After initially backing up a bit (to tease), the car inched towards me, and I first recognized Fuck-It in the passenger seat, and Wild Man in back, with The Austrian driving. They’d just gotten here and picked up Wild Man, and were about to head back to Augusta, when they saw me.

Knowing Velveeta couldn’t be too far behind, I got them to wait for him to arrive at the trailhead. While we waited, The Austrian decided he wanted to try out his can of bear spray, since he’d never used it, and wanted to know at least what it was like to spray it before he actually needed to.

Walking a short distance down another trail near the trailhead, he sprayed a brief shot into the air. I felt this was a good idea — I’d never test-fired my bear spray either, nor seen one used in-person, so getting some first-hand experience at least seeing one fired was useful. I had the good sense, though, to stand well away; Fuck-It was closer than advisable, and both he and The Austrian caught a bit of bear spray when the wind blew it back in their faces. (Don’t fire upwind, check.)

Once Velveeta arrived, we crammed into The Austrian’s rental car, and began the hour-long drive, mostly down dirt road, to Augusta, where Stumblebee and Bass were waiting. They’d already gotten a room with Fuck-It and The Austrian at Wagons West Motel. I got one for myself, Velveeta, and Wild Man; Recon and Sprouts joined once they arrived later in the day. 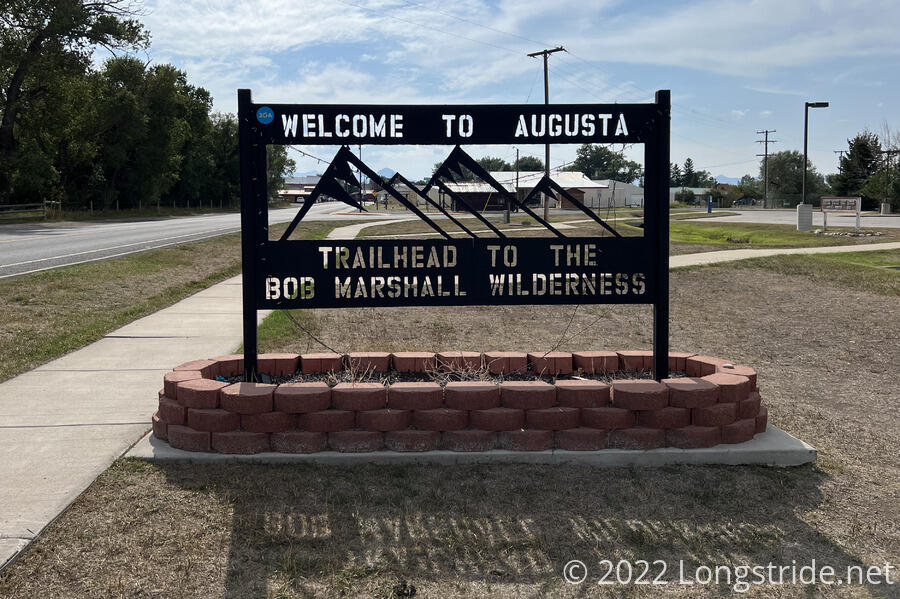 Welcome to Augusta — Trailhead to the Bob Marshall Wilderness

We got lunch at a restaurant in town, then got ice cream, and dinner, at two different places. Several other hikers came through town, including the three nobos I saw yesterday, and Guru, Arrow, and Ranger.

Lost in conversation, I’d put off doing my resupply for the next stretch, until it was too late. About 6:30 pm, I was about to walk over to the town’s general store, a couple of minutes after Recon, only to find that he was already on his way back to report that it closed at 6 pm! I’ll just have to resupply tomorrow morning. Fortunately, I have a ride lined up to get back to the trail: The Austrian is willing to shuttle the whole group of us to trail tomorrow!

The next stretch of trail, the CDT’s penultimate section northbound, goes from Benchmark, through the Bob Marshall Wilderness, to Glacier National Park. It’s one of the longest, most remote stretches on the CDT: 130 miles from the trailhead through to East Glacier Park.

Putting together a plan for this section, we decided to take the Spotted Bear alternate, which is almost 15 miles shorter with 2,000 ft less elevation gain and loss. This will easily save half a day of hiking, but still means I’ll be starting off with a week of food.

As we made our plans, I couldn’t help but feel relieved that the end of the trail is quickly approaching. Only about 215 miles left until I reach Canada.