After resupplying in Augusta, I began the penultimate section to Canada, entering the Bob Marshall Wilderness.

The morning and early afternoon were slow and relaxed. The Wagons West Motel had a fantastic breakfast restaurant attached to it; I got a giant plate with three thick pancakes, and sausage and eggs. It’s one of the best breakfasts I’ve had on trail. After breakfast, I got my resupply at the general store, and returned to the motel to repack everything for the trail.

The Austrian took Stumblebee, Bass, and Fuck-It up to the trail first. I’d have preferred to have been in the first group up to the trial, but I’d only just started repacking my food when they were ready to leave. With it being a two-hour round trip, the rest of the morning didn’t need to be rushed. I finished repacking my food, then went to find the rest of the group, who’d gone ahead to the post office, and then further into town. Once I found them, we went to a restaurant for lunch, to wait for The Austrian to come back.

We were on our way by 1:30, with The Austrian driving Sprouts, Velveeta, Recon, and me. Wild Man and Guru were able to catch a ride just behind us, though their driver appeared to be somewhat slow, and they got to the trailhead somewhat after us.

An hour later, we were back at the Straight Creek Trailhead, from yesterday. The Austrian dropped off Recon and me at the road junction he picked me up at yesterday. The two of us walked without packs to the parking lot for the Benchmark Trailhead, located at the end of the road. After we started walking, I realized I left my can of bear spray on my pack. While I didn’t expect to come across any bears while walking a mile down a road that a car had just driven down, I did feel slightly uneasy not having my bear spray. (Fortunately, Recon had his, and we didn’t need to use it.)

It took Recon and me about 15 minutes to make it to the trailhead. We waited about another 15 minutes for Wild Man to show up. He still hadn’t arrived then, so we headed up the trail, into the Bob Marshall Wilderness. 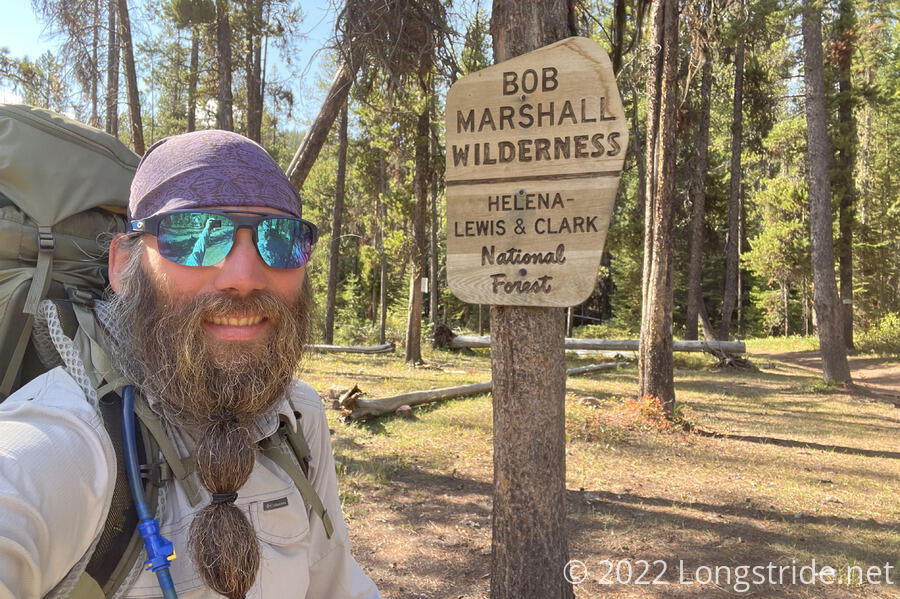 From the trailhead, the trail the CDT joined started off as one of the widest and most gentle trails I’ve ever hiked, as it followed the valley of the South Fork Sun River north. We passed the same weird pair of horseback riders I saw yesterday; at least this time they did not seem glued to their camera.

While we started off in a nice forest that kept the sun off, the forest quickly ended, as the trail went through the scar of an old burn. The forest was very slowly starting to recover. New trees were starting to grow near the trail; in one place a very thick row of pines lined both sides of the trail. One day, it’ll be a nice thick green tunnel, but that’s probably decades off. 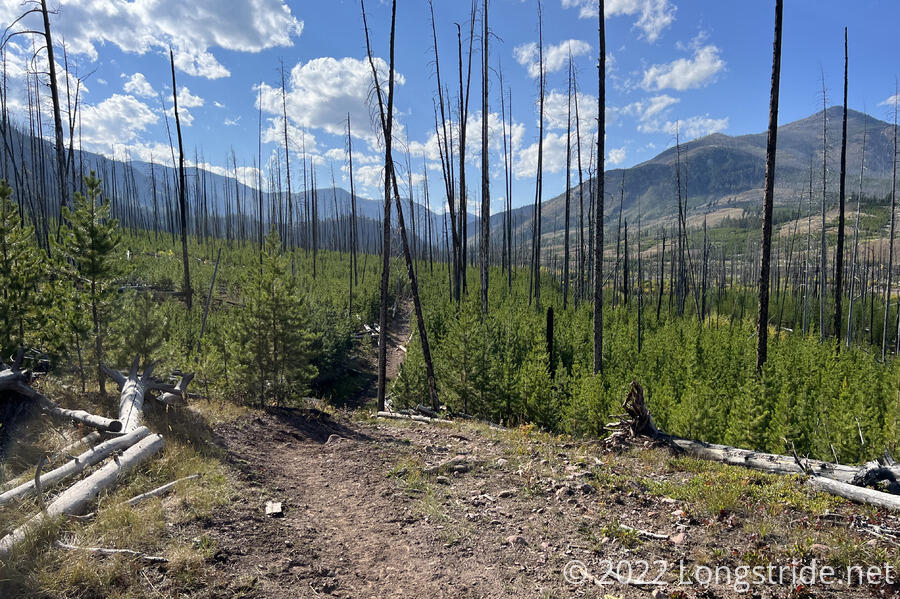 A burn area starting its slow recovery in the Bob Marshall Wilderness.

Approaching a confluence of the the totally-not-a-mouthfull West Fork South Fork Sun River into the South Fork Sun River, the river valleys widened out into a large meadow. It seemed to have once been a forest; now it’s covered with fallen trees and grasses. 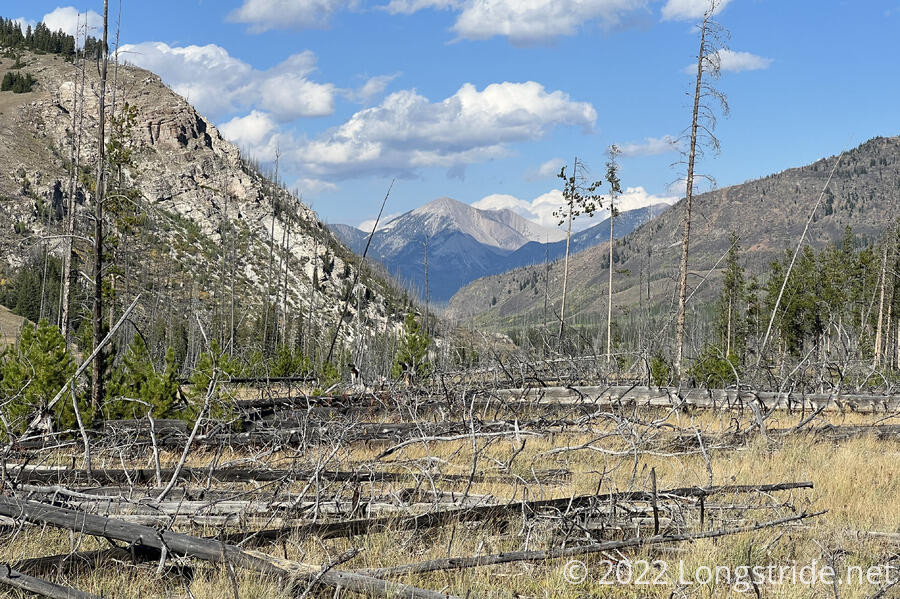 Near the confluence, the trail turned west, following West Fork South Fork Sun River up its valley, and crossing the river via a bridge. 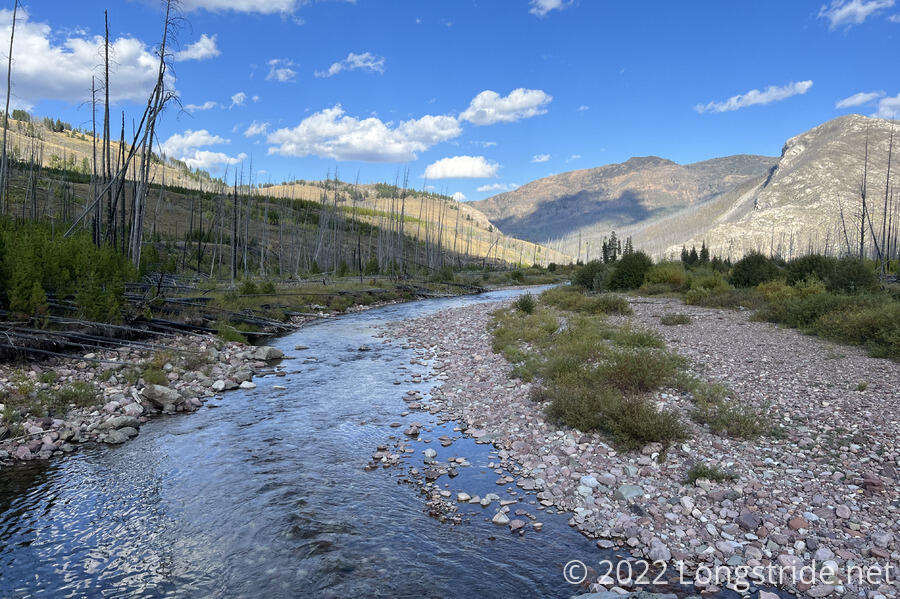 Both river valleys were very gentle in terms of elevation gain, and I made fairly good time, despite a heavy pack with six days of food.

Eventually, I passed the edge of the burn scar, and re-entered forest. The sun dipped below the mountains, and I made it to a campsite just above the river, where Wild Man and Guru had already set up camp. (They’d passed me while I stopped for a break earlier.)

Sprouts, Velveeta, and Recon camped somewhere behind; Stumblebee, Bass, and Fuck-It are somewhere ahead. Probably, we’ll all catch up tomorrow somewhere.

While I was cooking dinner, I saw a few field mice skittering around the fire pit, and my food bags. Later, I had to chase them out of my pack, which I’d initially left outside my tent while I was cooking. They’d gotten into the pack’s brain, where I kept my snacks for the day, and nibbled a hole into my bag of trail mix. I tried to hang my bear sack someplace I thought they wouldn’t be able to easily get at.

With most of the day in a burn scar, The Bob wasn’t living up to its fame as one of the most beautiful sections of trail on the CDT. Maybe tomorrow will be better, as the trail goes along the famed “Chinese Wall”.