A better day of weather and a shortcut saw me out of the Bob Marshall Wilderness and closed the gap towards Glacier National Park.

I woke up sometime after 7, to still overcast skies. At least, though, the rain had stopped, sometime before midnight.All that fell after that was the occasional pitter-patter of the wind blowing water off the trees. The cool air outside kept me in my tent longer than I’d have preferred; it wasn’t until almost 9:30 that I left camp.

From Beaver Lake, the trail was relatively gentle, if a bit muddy from yesterday’s rain. Shortly before 10, I crossed Muskrat Pass, leaving the Bob Marshall Wilderness, and transitioning from the Flathead National Forest back into the Helena - Lewis and Clark National Forest. (There was no specific signage, apart from a generic National Forest Wilderness Area sign on a tree.) 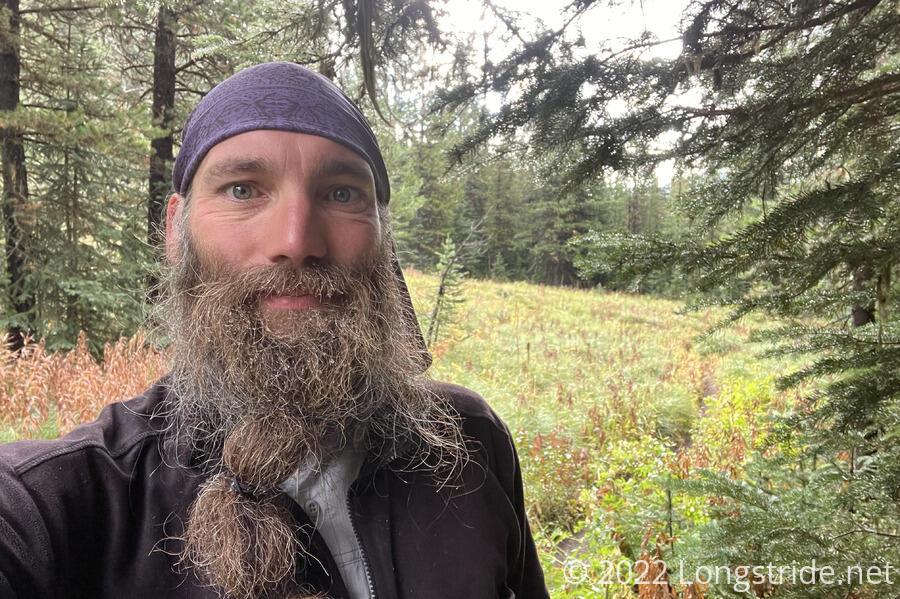 The trail continued through forest for several miles. Wanting to make up for “lost time” yesterday, I was kind of hiking in a trance, not really paying much attention to the scenery around, though there often wasn’t much visible through the trees. Dark clouds to the west threatened more rain, and it almost felt like I was hiking on borrowed time. 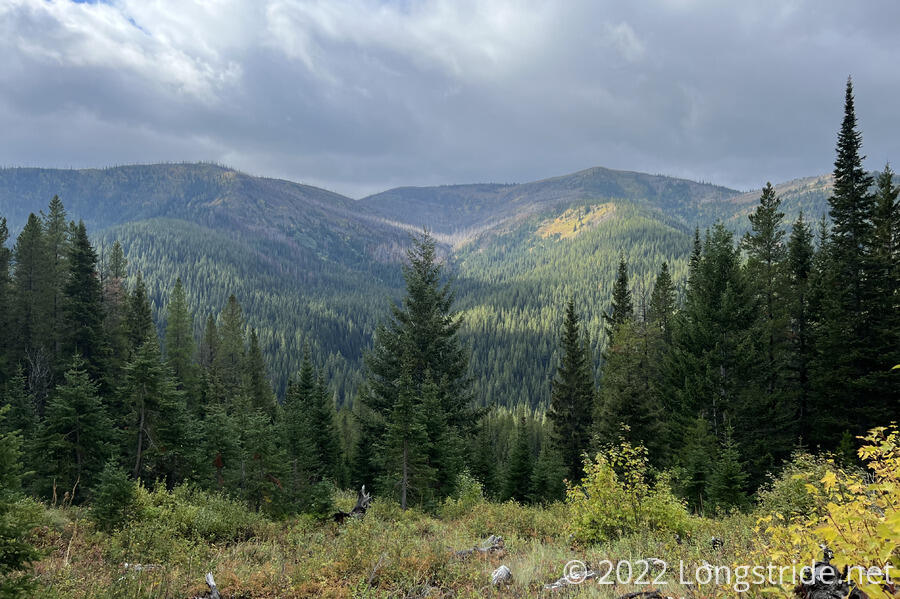 After gently bouncing around with a slight downhill for five miles, the trail crossed Elbow Creek, and I stopped for a short break that wound up being longer than I’d initially planned. The overgrowth along the trail got my shoes and socks wetter than they had been, so I set out today’s socks, yesterday’s socks, my boots, and my pack cover out to dry. (I’d meant to set out my rain jacket, but forgot.) A bit of a breeze helped, but the sun was still stuck behind the clouds, so without actual warmth, my stuff didn’t dry very fast. I didn’t set my tent out, because with the clouds, I was concerned it was going to rain again.

Immediately after crossing the creek, a large pile of bear scat sat on the trail, a brown blob with colorful berries. Aside from bear tracks I saw on a few occasions, this has been the most overt sign of bears I’ve seen so far this hike. 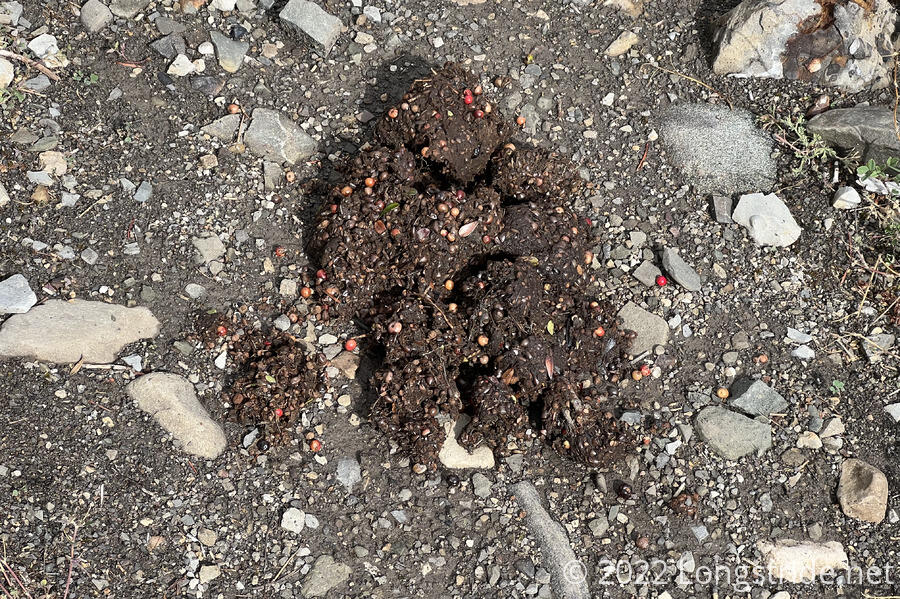 Fresh Bear Scat on the Trail

After leaving Elbow Creek, the trail began a gradual uphill through forest. The sun continued to try and come out, occasionally illuminating the forest and making it seem less dreary out. 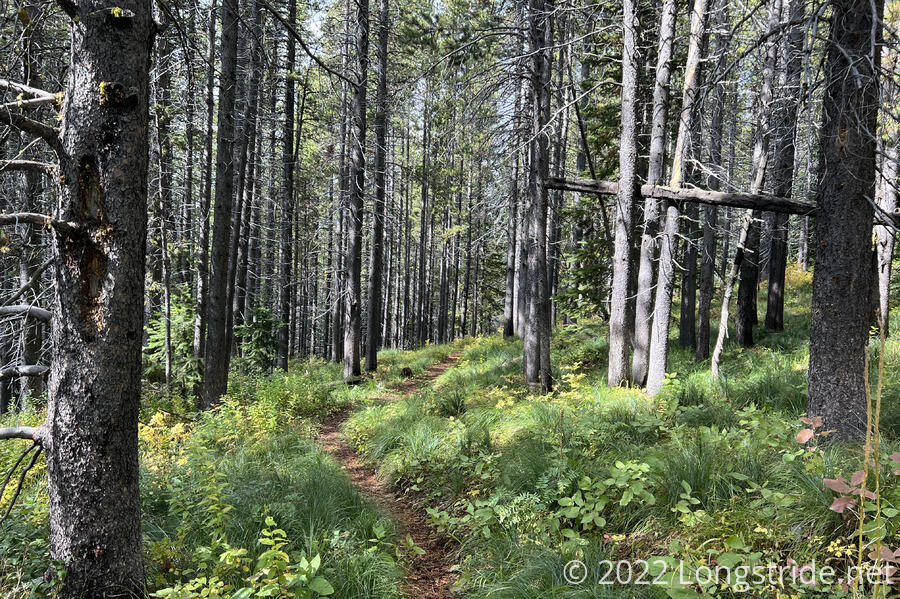 After a few miles, the trail dropped down to North Badger Creek via a set of several tight, steep switchbacks. After crossing the creek, I passed Recon, Sprouts, and Velveeta finishing a break. They’d found a large space underneath trees in the forest next to the trail, and paracord to use as a clothes line to dry their clothes (and sleeping bags, and tents). With the wind, it had apparently worked quite well.

I briefly conferred with them, and confirmed our plan to hike to Benson Creek via a shortcut route that would cut nearly four miles and 2,000 feet of elevation gain (making for a roughly 21 mile day today), which paired with a 24 mile day tomorrow, would get us to East Glacier Park tomorrow evening. East Glacier Park, just outside of Glacier National Park, is our final trail town before Canada.

The trail turned east, paralleling the North Badger Creek down its valley, a very easy, gradual downhill, and diverged from the CDT, which began a steep climb up and behind Running Owl Mountain. Higher up and partially along a ridge, the CDT would probably have better views, but I was more than ready to be in town, and with a potentially troublesome section tomorrow, I didn’t want to spend more time on a more circuitous route than necessary. Velveeta, though, decided to stay on the CDT, and I saw him starting up the mountain as I passed by.

Along the way, I stopped for a short break. Later, I crossed a creek, making it almost all the way across before stepping on a rock that moved under foot, dunking my foot in the water. 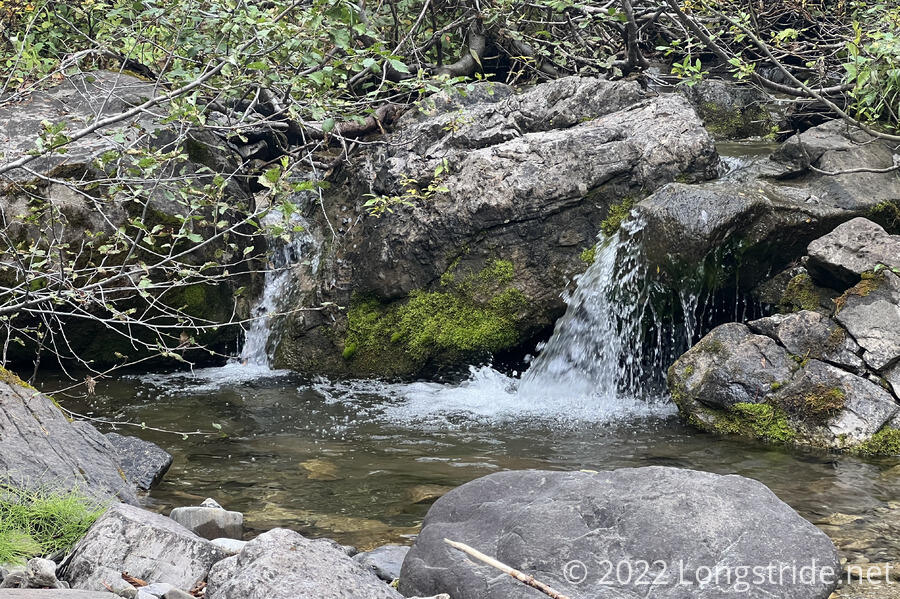 After a short but steep climb, I re-joined the CDT. Shortly past that, the CDT joined the Two Medicine Trail. This trail, sharing the name of a river and campground in Glacier, was the first overt sign I’m really nearing the end of the trail.

Sprouts and Velveeta passed me while I was stopped; I caught up with them at a ranger station that had a water spigot and a privy.

From the ranger station, the trail followed a dirt road for a while, and then an ATV track, gradually climbing. Twice, ahead of me, I encountered two easily-startled wild horses that eventually disappeared into the forest.

As the afternoon turned to evening, it got cooler, enough so that I put my pants legs on during my last (and very short) break. I got just enough cell service to receive a text message from Dyno, now a couple of days ahead of me, with lots of helpful information about Glacier.

After crossing the interestingly-named Lost Shirt Creek, the trail began a somewhat steep climb. Velveeta surprised me, charging up the hill and flying past me as I stopped to unzip my pants legs for ventilation since they were getting too hot on the climb.

Half an hour later, about fifteen minutes before sunset, I reached Benson Creek. Velveeta, having been flying, already had his tent set up, along with Sprouts and Recon. After getting my tent up, I cooked dinner, somehow mangling my macaroni and cheese, possibly by not using enough water. (After not having a hot dinner yesterday, this was a bit of a disappointment.)

I relayed the text I’d received from Dyno, a mix of bad news and helpful information. The park and East Glacier lodge shuttles are closed, which limits mobility in the section between East Glacier Park and Many Glacier Campground. (We already knew the lodge and store at Many Glacier was closed, but had the shuttle been operating, we could have taken the shuttle back to East Glacier for resupply. Now, we’re forced to carry food from East Glacier all the way to Canada, a six day stretch. East Glacier lodge itself is also closed, which means no breakfast buffet. The Two Medicine Campground (about ten miles north of East Glacier) is also closed, due to bear activity. This is a bit problematic, since we need to get permits at Two Medicine for backcountry camping for the rest of the park, and permits are not available for same-day camping. Dyno also gave some suggestions on food and lodging.

Recon, Velveeta, and I also started to tentatively plan getting back to Chama after making it to Canada. I was thinking of getting a rental car and doing a road trip back to Albuquerque or Santa Fe, and taking the busses back up to Chama in order to finish the trail. Recon suggested that Wild Man might be interested, since he needs to get back to Texas, and New Mexico is vaguely on the way.

It was a bit windy after sunset, and I was quite happy to find that my tent dried out very well in the wind. The plan for tomorrow is to leave “early”, and try and make it to East Glacier Park while there’s still sun. 24 miles should be easily doable, but an extensive area of severe blowdowns, known as the “devil’s jungle gym”, stands in the way.