After a long day, I reached Glacier National Park, and stopped in the town of East Glacier Park. The final section of trail in Montana lies ahead.

With a 24-mile goal for town, I managed to leave camp incredibly early compared to the last few days, on my way by 7:30. Still a little cool out, with the sun not quite yet over over the mountains, it was pretty nice out. Despite proximity to a creek, my tent and sleeping bag were both surprisingly dry, probably due to the wind overnight. For the first time in several days, I felt like it was going to be a good day.

I started early enough that some of the nearby mountains still had alpenglow near their peaks, and some straggling clouds lit up in bright colors as the sun worked its way above the horizon. 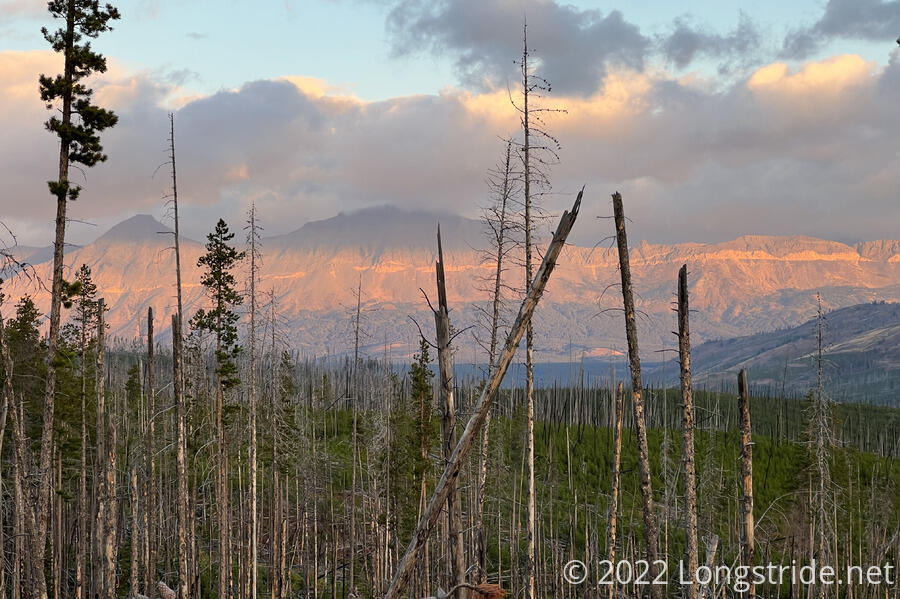 Little Dog and Summit Mountains — A line of mountains just inside the southern border of Glacier National Park, in the morning sun. The trail later today runs northeast along the base of these mountains.

A brief climb up from the creek put the trail in the midst of an extensive burn area, and what was the start of the “devil’s jungle gym”, a miles-long stretch of massive blowdowns that earlier in the season required at least one person to be evacuated by helicopter, and generally was a rite of passage for southbounders, whose legs were scratched up from navigating through the trees. Fortunately, though, a trail crew had come through in late August to clear trees from the trail. Lining the trail, almost constantly for miles, was cut trees and sawdust. This was no small effort for the trail crew that had cleared the trail. The only maintenance issues in the first several miles of the day was the trail being occasionally overgrown with knee- to waist-high grasses.

Once up from the creek, the trail bounced along the hills in front of a mountain, heading northeast towards a line of mountains just inside of Glacier National Park. 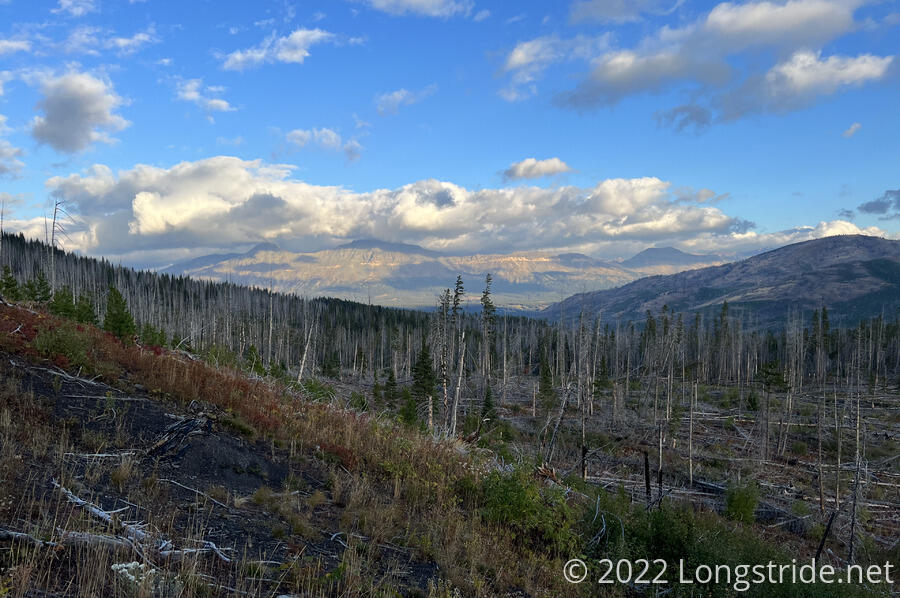 After about two hours, I reached a small bit of forest that remained unburnt. This seemed to be where the trail crew ran out of time. After five miles of trees cut and removed from the trail, rather complicated snarls of fallen trees blocked easy progress.

The forest didn’t remain thick for very long; a short distance later, I was back in a burn area, with fallen trees all around. This was a particularly annoying stretch of trail, longer and more difficult than the entrance into the Cirque of the Towers in the Winds.

This was hardly the most difficult series of fallen trees along the trail, but it’s representative of what I had to go through for about a mile. 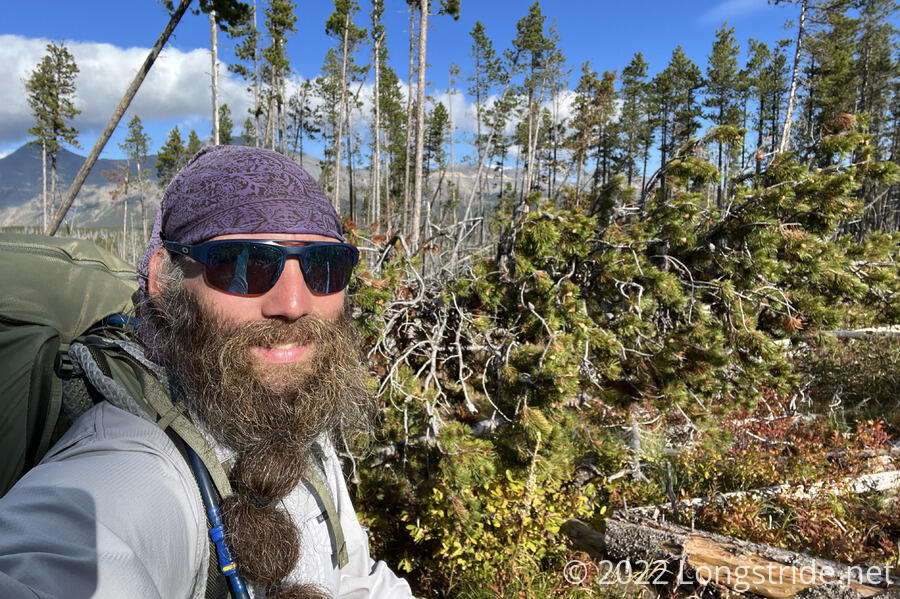 Crossing Pike Creek marked an end to the sea of deadfall, much abbreviated from its state just a few weeks ago. It took me an hour to hike that eight tenths of a mile, and it could have been much worse. As it was, it was likely the slowest stretch of trail I’ve hiked, and I was thankful the trail crew had cleared as much as they had.

About half a mile later, I crossed another creek and stopped for a break in a forested area.

After my break, I passed an elk hunter, who wanted to know if I’d seen any today. (I hadn’t.) The trail then turned onto an ATV trail that climbed up onto a relatively flat ridge, which I made pretty good time on.

That trail took me through a car campground and across US 2 at Marias Pass, nestled in the valley I saw in front of the mountains I saw this morning. Crossing a pair of railroad tracks, I reached the boundary for Glacier National Park. Five months after I left Crazy Cook, I am now at the last section of trail on the way to Canada. 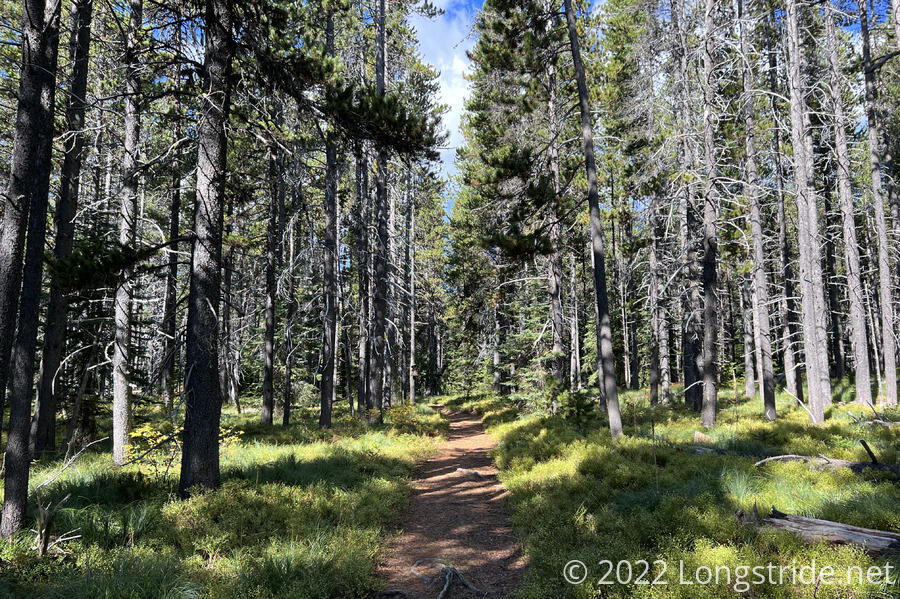 The trail into Glacier was a gentle uphill along a relatively wide trail. I approached Little Dog Mountain and Summit Mountain, which I’d seen all day from a distance, and now from much closer.

After about another half hour hiking towards the mountains, the trail turned to the northeast, paralleling the ridge. 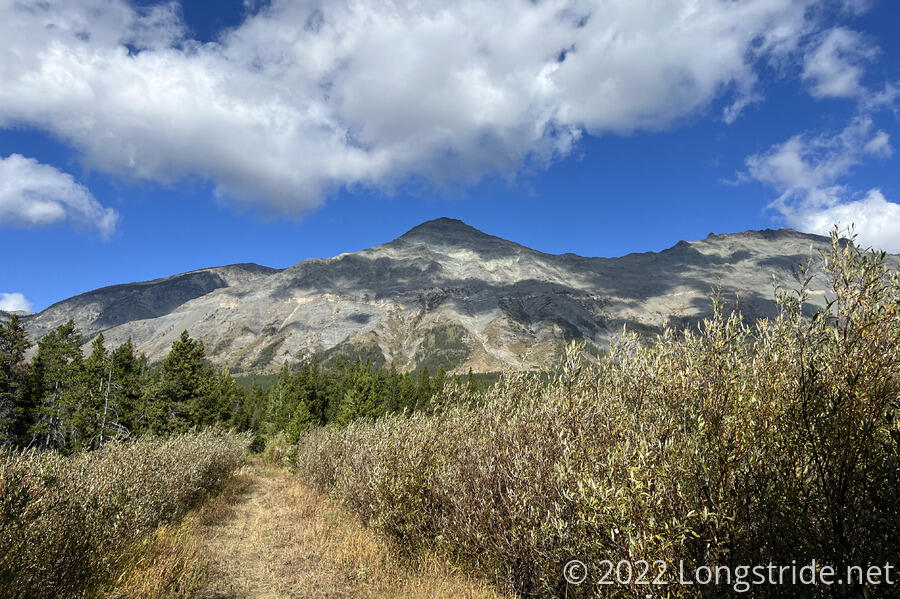 I caught up with Velveeta and Recon, and joined them for a short break. Sprouts had already hitched a ride to East Glacier Park from the road.

The trail through this early part of Glacier was fairly uneventful. I crossed several small creeks over bridges; if the park really was pulling up bridges, they either hadn’t started yet, or were saving these for last. This trail was fairly well maintained. I only saw a handful of other (day) hikers, but it was enough to see that this part of the trail was fairly well traveled.

The rest of the afternoon through Glacier was a bit of a blur for me, as I rushed down the trail, attempting to get to town as early in the day as possible. Just before 5 pm, I crossed out of the park, and the doubletrack I was hiking on turned into a small dirt road. Now on on the Blackfeet Indian Reservation, I sped down the road, eventually reaching a larger dirt road that took me to the town of East Glacier Park.

A little before 6, I reached the Looking Glass, a former restaurant turned into a hiker hostel, where the rest of the group — and several other hikers — had gathered.

I was surprised to find The Austrian there, and a plan for tomorrow quickly settled out. The Austrian would give several of us a ride up to Two Medicine Ranger Station tomorrow morning, so we could get backcountry camping permits. We’d then slackpack back to Looking Glass, and then the day after (Monday), he’d shuttle us back to Two Medicine and we’d hike north from there. Stumblebee, Bass, and Sprouts were zeroing (and were likely to skip that section entirely); Recon was also planning on zeroing — and then hiking the whole distance to our campsite on Monday. (Today is thirteen days of hiking since our last zero in Helena; with six more days to Canada. I wanted the zero, but was willing to settle on half a day of slackpacking since that’d also mean Monday would be shorter.)

After the owner of the place gave me a tour, a large group of us left to walk to the other side of town to go to a Mexican restaurant. We were surprised to find it closed, for an employee appreciation party. With basically all the other businesses in East Glacier Park now closed for the season, we went to the general store to pick up some food and beer, and I scouted it out to make sure I’d be able to do a resupply tomorrow.

Dinner for me was a frozen pizza, cooked in the Looking Glass’s restaurant kitchen. It was very tasty, and very reasonably priced.

In the evening, I saw Mr. Freeze drive in, with Soccer Mom, the two of them having just finished the trail two days ago. I last saw her way back the day after Salida, CO (and last saw Soccer Mom, a few days north of Pinedale, WY). I learned from her that both Boss and Patches had quit the trail sometime back in Coloado, for different reasons. (The K2s are also still ahead, somewhere in Glacier, given the timing of when they were at Looking Glass. Dog Bite and Plus One flipped up to Glacier some time after I saw them in Grand Lake, along with Simple, but also abandoned thru-hiking the CDT.)

The eight of us — me, Bass, Fuck-It, Recon, Sprouts, Stumblebee, Velveeta, and Wild Man — planned out the remainder of our hike through Glacier, aided by Mr. Freeze, who pointed out a few shortcuts we could take. Given campsite availability, we may have to split into two groups of four after Monday, but we’ll all be able to finish together in six days — September 30. The weather looks like it will be okay for most of that, though with a chance of rain towards the last few days of the month. We’ll have to keep an eye on it, but there’s not much we can do if the weather’s not great.

In the discussion, we discovered that Wild Man hasn’t had a shower since Whitehall (three weeks ago). “I usually wash my clothes,” he said. I was even more surprised to learn that Recon also hadn’t had a shower in a similar timeframe. (The longest I’ve gone without a shower was eight days.)

Tomorrow, we’ll leave early for Two Medicine Ranger Station to get our permits when the ranger station opens, and then it’ll be a “short” ten mile hike back to East Glacier Park for another night at Looking Glass. From here, it’s just under 100 miles to Canada, and the northern terminus of the CDT.