The first full day in Glacier National Park gave amazing views, as the final stretch to the northern terminus begins.

I got up early this morning, along with Bass, Fuck-It, Wild Man, and The Austrian, who shuttled us to the Two Medicine Ranger Station so that we could get camping permits for the remainder of our hike through Glacier National Park.

We left shortly before 7, wanting to get there as early as possible so we could be first in line. As it turned out, not only did we get there twenty minutes before the ranger station opened, but we were the only people there. 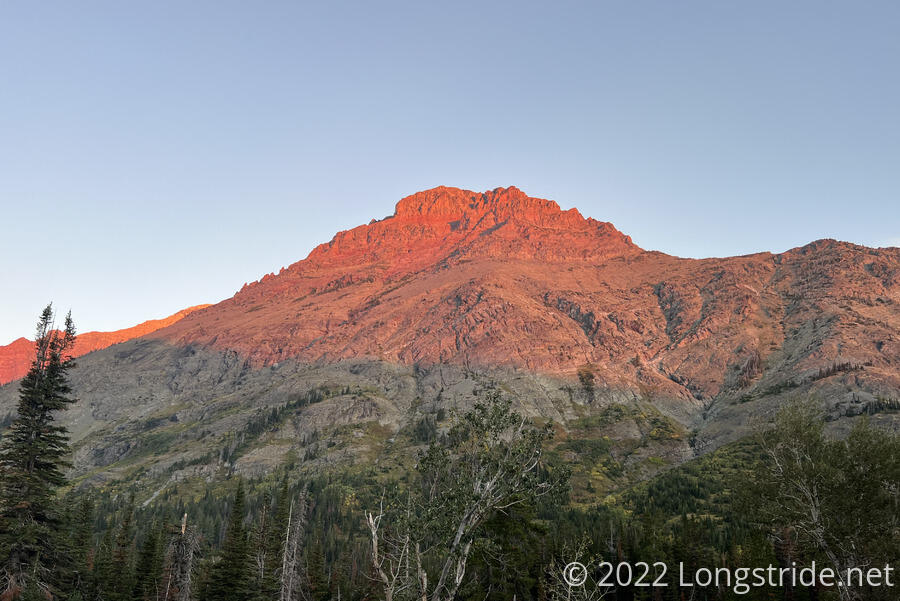 It took about half an hour to prepare our permits, because we were a slightly complicated case: our group of eight needed to be split into two groups of four; there had to be an accommodation for two people to spend an extra night in Glacier because they weren’t going into Canada; and some of the campsites were full, meaning we couldn’t all stay at the same place every night.

Assuming no surprises, we will reach the northern terminus on Friday, five days from now. We have another relatively short day planned tomorrow, to accommodate several people’s (including my own) need to go to the post office, three 20-ish mile days, and then another short day to Canada.

Permits accomplished, The Austrian and Bass returned to Looking Glass, while Fuck-It, Wild Man, and I took to the trail, hiking ten and a half miles back to East Glacier Park with very light packs.

It was still a bit cool out, and the sun had yet to crest over the mountains, so with our light packs, we had an easy start this morning. From the ranger station, we walked back along the road that brought there, turned off onto a trailhead, and began climbing the slightly steep rocky trail towards a pass. 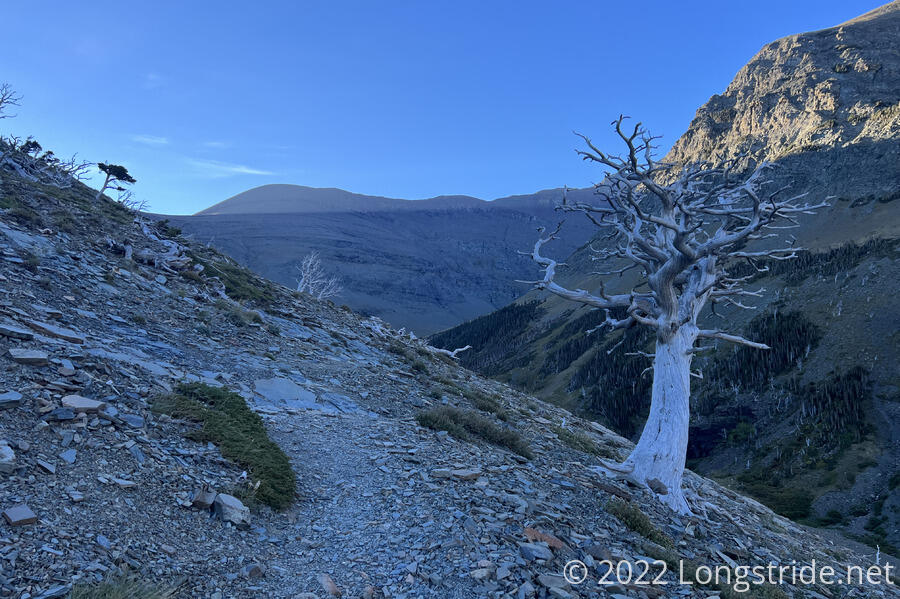 A lone, sun-bleached tree stands next to a rocky trail, as the sun starts to rise over the ridge.

In contrast to the often-overgrown trail from yesterday, this trail was nearly all firm and rocky, with not many plants growing near the trail, especially once it started switchbacking up the side of a mountain. Scars remained, disused, from older alignments of the trail before the switchbacks as they currently exist were built.

It remained cool and crisp until the sun finally rose over the mountain we were climbing, aided both by time marching on and us marching up. (The higher up we were, the less the sun needed to climb before we were out of the mountain’s shadow.)

As we climbed, we got increasingly good views of Two Medicine Lake, behind us to the north, as well as the other mountains surrounding the wide glacial valley. The shadow made by our mountain gradually retreated, and the valley was bathed in increasing sunlight. 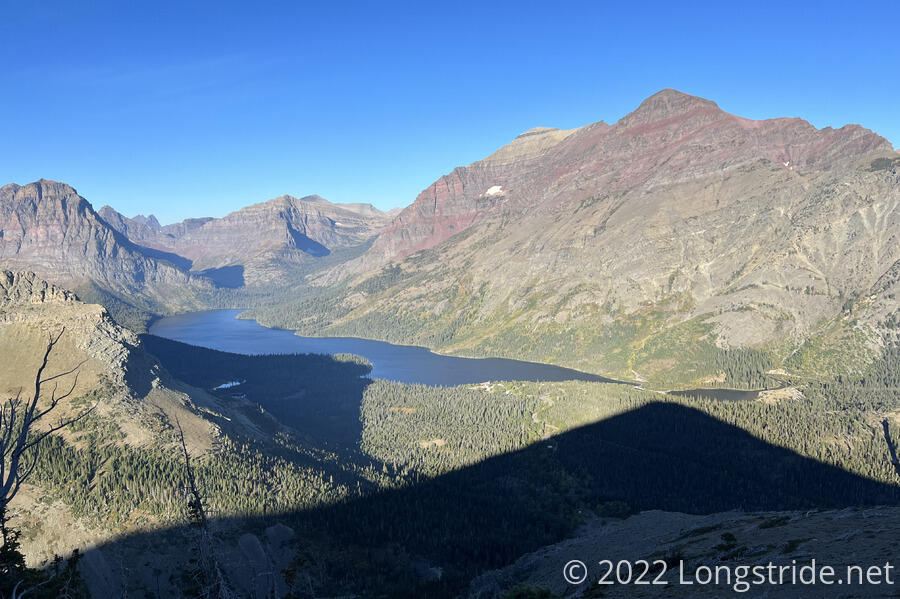 The further up we went, the more the wind picked up as well, reaching a crescendo once the trail brought us to a ridge. Following the ridge and crossing in front in front of a peak a couple hundred feet above the trail brought me to a relatively flat sloped plain. A detour led me to a scenic viewpoint at the edge of a cliff, where Wild Man was already waiting. Fuck-It got there shortly after me. 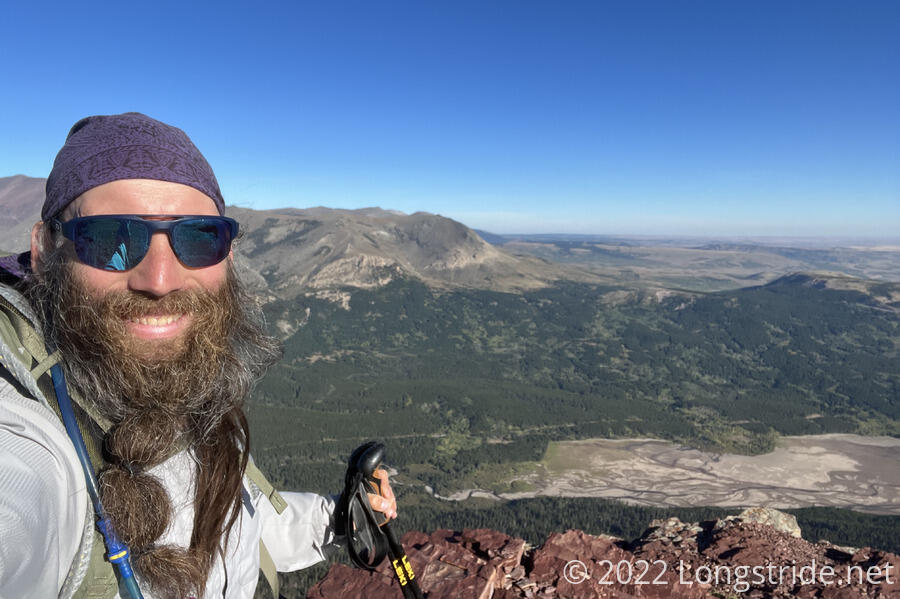 The views yesterday were nice, but they didn’t begin to do Glacier justice. But now, inside the park and up near the tops of the mountains, the views were incredible. Just from here, I could see why Glacier is favored by so many people.

The southeastern entrance to Glacier. Two Medicine and Lower Two Medicine Lakes sit in a glacial valley. To the northeast, a flat plain extends as far as the eye can see — into Canada!

We sat, taking in the views, for almost 45 minutes, but eventually, the wind (and cold) were getting to us, and we left, now heading almost entirely downhill back to East Glacier Park. Initially a bit steep, the trail mellowed out after it shed most of its elevation gain from Two Medicine, and reached the treeline. A few short stretches were a little overgrown, but nothing worse than what I went through yesterday. Past the treeline, there was fairly reasonable tree cover most of the rest of the way to East Glacier Park, though a couple of clearings provided a view of the area. 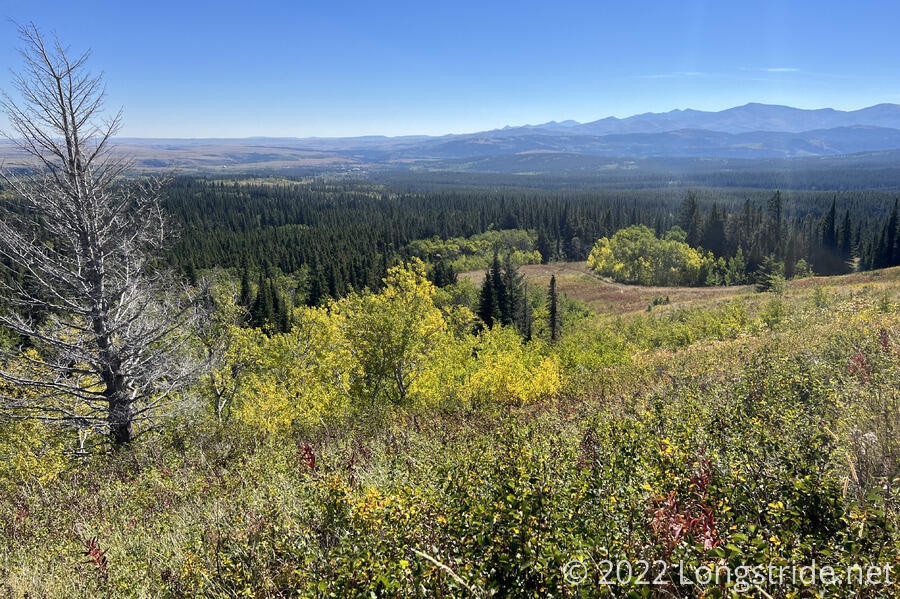 On the way to town, about 45 minutes out, I ran into hiker couple Big Gulp and Pretty Bird, heading north into Glacier. They recommended staying on the dirt road the trail was currently on to get to town, rather than taking the trail, which was significantly overgrown.

Following their advice, I stayed on the road, and then overshot a turn towards town because my maps differed from the actual reality on the ground. (Fortunately, that delayed me less than five minutes.)

I made it back to town at 1, and took the opportunity afforded by a long afternoon to get a shower and relax. It’s not a zero, but it’s the best I can do for now. (This means that when I reach Canada, it will have been 19 days since my last zero, in Helena. This will be my longest stretch on this trail between zeroes, both in days and in distance — about 335 miles.)

I’d planned on doing resupply today, but I need to go to the post office tomorrow to pick up my passport, so I’ll do my resupply tomorrow morning when I do my resupply, when The Austrian can give me a ride there.

Dinner at the Looking Glass was some fantastic spaghetti with garlic bread that The Austrian and Bass made for the nine of us. 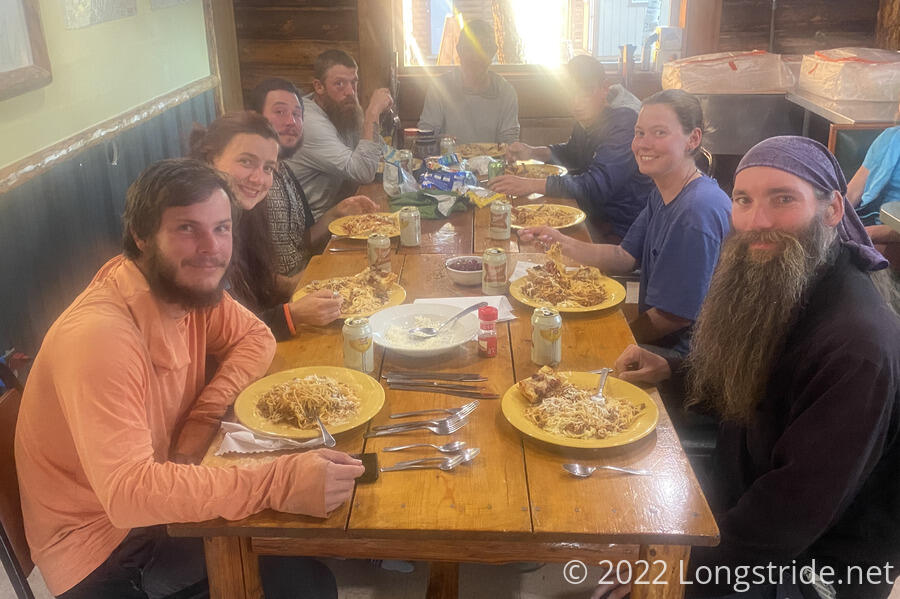 I talked further with Recon, Velveeta, Bass, and Wild Man to plan further on how to get back from Canada. There are some options, but it’s going to be a bit challenging however we do it, and no clear plan developed. It seems like it’ll be something that I figure out when I get there.