An unexpectedly wet day, with more climbing over fallen trees than I’ve ever had before, made for fewer miles than I planned, as I hiked deeper into the Winds.

With a later start than planned — I accidentally turned my alarm off instead of just snoozing it — I continued northwest, following the trail as it flowed the foothills of the Wind River Range. Ducking in and out of forest and sagebrush meadows, there was a variety of scenery this morning, including additional views to the Prospect Mountains to the west, across what seemed like a large dry plain between those mountains and the Winds.

View west to the Prospect Mountains.

The trail had quite a few intersections with forest roads, which were surprisingly well-signed, a vast improvement over the Basin. (I’d almost forgotten how well-signed the trail was the first couple of days in Wyoming.) Along the way, I passed a still-occupied tent (surprising, since I’m usually one of the last people to start), a pair of bucks munching on some sagebrush, and, in a harbinger for later in the day, no small number of fallen trees on either side of the trail. 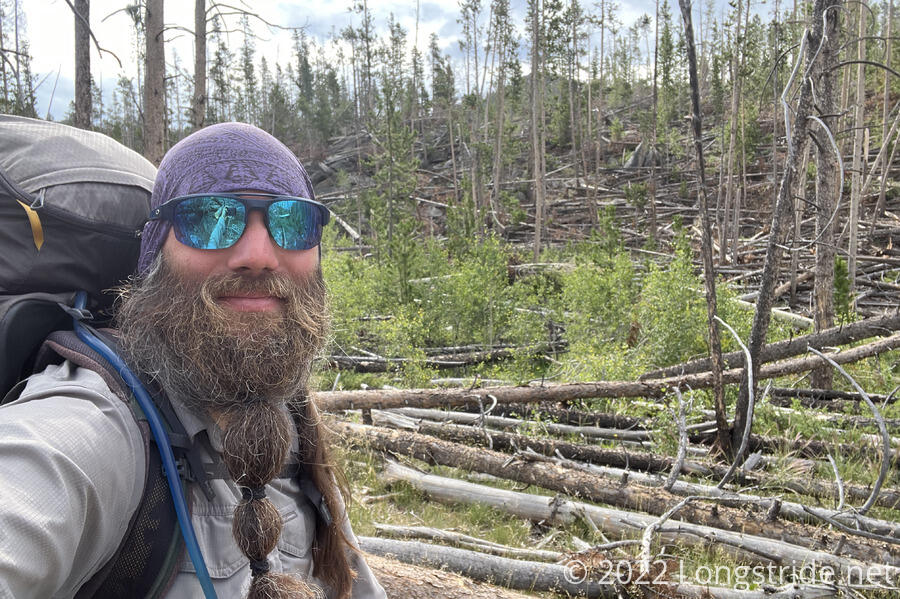 Early in the day, Mount Nystrom made its appearance. It’s the southernmost mountain along the Cirque of the Towers alternate route, so as such, it drew ever closer throughout the day. 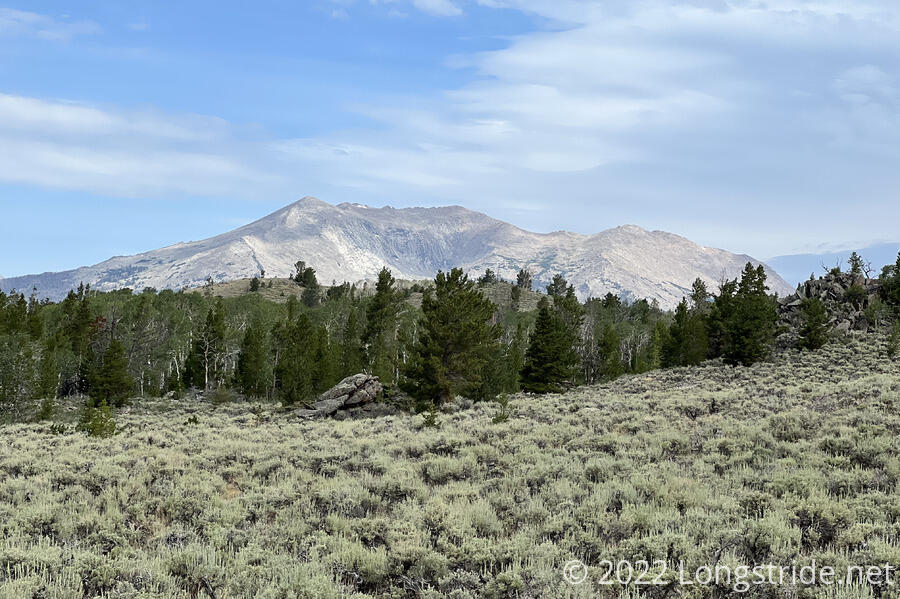 Away from the Basin, everything continued to get greener and wetter, a welcome change. After crossing the Sweetwater River twice, the trail began a steeper climb up into the range, roughly following the river upstream. 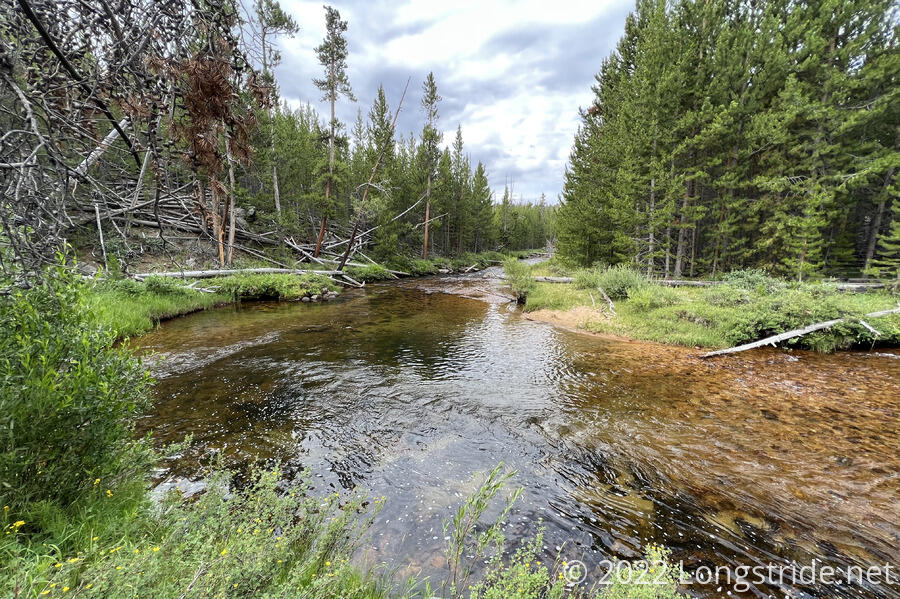 Unfortunately, more trees meant more blowdowns. There were plenty of fallen trees that could just be stepped over, but there were also several jumbles where multiple trees completely blocked the trail, requiring creative acrobatics to make it through. After one particularly difficult blowdown, with yet another difficult jumble of trees visible ahead, I stopped for a break. The blowdowns stopped shortly after. 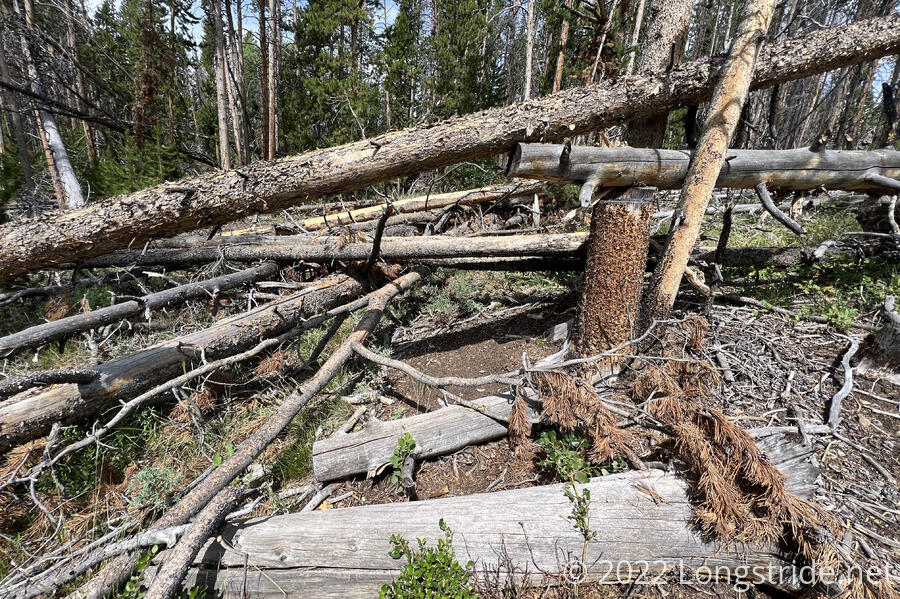 Blowdowns — A mess of blowdowns blocks the trail.

As I continued to climb into the mountains, I passed a trailhead with a register and bear safety signage. (Good thing I have a bear-resistant food bag, which I’ve been carrying since my excursion to Denver, and which I used for the first time last night!) The sign suggested not having food like “bacon or tuna”, without saying why those two specific examples, so it may as well have read “don’t have food bears like, such as, food bears like, which is all of it”.

After crossing Larsen Creek twice, the trail worked its way up to a saddle. Clouds blew in, and a cool breeze picked up. 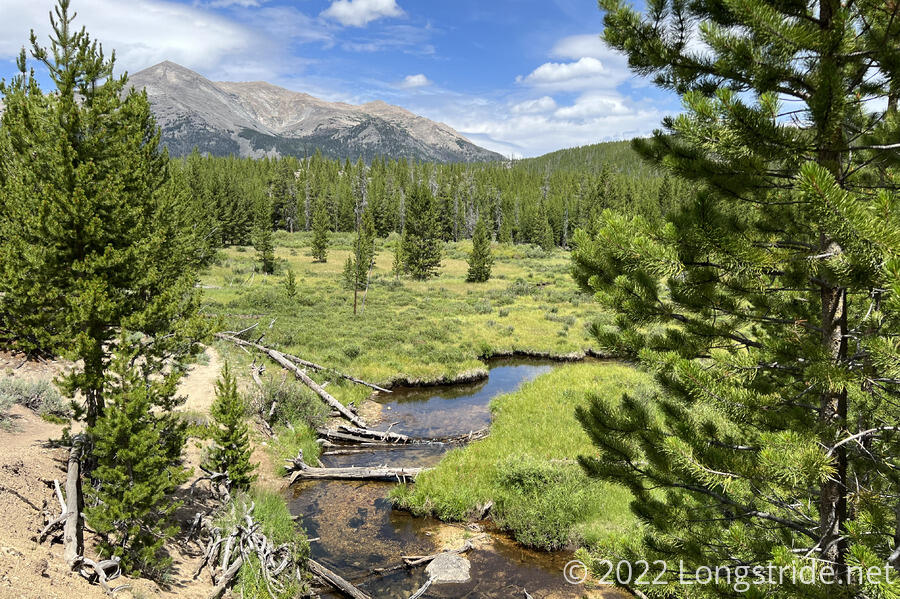 Almost immediately on the descent from the saddle, significant blowdowns of very large trees began. At one, I had to sit down on a fallen tree trunk, brace off of a rock, and slide/jump down onto the trail below. It looked like trail maintainers tried to saw the log to move it, and part of the chain had gotten stuck in the tree. At another, I had to take my pack off and lift it overhead so I could squeeze between the fallen tree and a large rock.

Progress was very slow due to the fallen trees, which also made following the trail difficult. I wound up off-trail several times, and it took me over half an hour to make half a mile of progress. To make matters worse, it started raining, making everything more challenging. With the trees doing nearly everything they could to be as frustrating as possible, it was difficult to appreciate the beauty of the scenery.

At the bottom of the downhill from the saddle, I reached a fast-flowing creek with only a pile of logs between the two rocky shores to serve as a dry crossing. I spent a few minutes looking for an alternative route, but there didn’t appear to be any, at least, not as far as I went up- or down-stream. Reluctantly, I crossed over the logjam.

Exhausted, I stopped for a break on the other side of the creek. I’d run out of water in my water bladder on the way down the hill, so I spent a fair amount of time filtering enough water to get me somewhere else. I’d had the thought to camp here, but the only decent campsite looked to be on the south side of the creek, and I wasn’t going to cross back over now that I was on the north side.

The rain let up a bit while I was filtering water, and a small patch of blue sky gave false hope that there might be more sun. I trudged on. Just past the creek was the turn to the Cirque of the Towers alternate. There were conflicting reports in my trail guide; comments said that the first bit of the alternate had a significant number of blowdowns. Other comments said that the trail had been rerouted, and the new trail was clear, “just ignore the blue line [from the guide] and follow the dotted line [from the underlying topographic map]”. Either way, the next feasible campsite appeared to be in four miles. Now 5:30, I hoped I could make it there by 7:30, and still have time to cook dinner before sunset.

Shortly after I left the creek, thunder rang out; a little later, there was lightning, directly overhead, and the rain picked up. Occasional thunder crackled for the next fifteen minutes; fifteen minutes later, the rain mostly stopped. By this point, the rain didn’t matter any more; my shoes were completely soaked through from the rain, and from absorbing water from plants.

Following the reroute, there were few blowdowns of consequence, and where there were, a detour had already been established. The trail itself was nice to walk on, though with the rain, it was quite humid out, and I was tired, and slow.

I passed by a small lake, nestled below a towering granite cliff face. Just beyond the lake, after crossing its outlet, I happened to spot a passable campsite just barely large enough for my tent in a small depression just below the trail. This was two miles short of where I was aiming for, but it had already taken me an hour and a half to get here from the creek. Expecting another hour, at least, to go another two miles would probably get me there awfully close to sunset. So I decided, no, this was far enough for today.

This made for a rather disappointing 18 mile day, when I’d expected at least 22. This’ll make it a bit harder to get to DuBois, but four miles won’t be too hard to pick up over the course of six days. Partly to blame for the sluggishness was having six days of food in my pack; the broken load lifter didn’t help either, and on the steeper uphills, my pack seemed to have a notable backwards list to it. The blowdowns, though, really ate into the day’s mileage. I don’t think I’ve ever had to deal with this many blowdowns in one day before.

I got my tent set up, and made a quick trip back to the lake’s outlet to collect water for dinner. The rain had stopped while I set up my tent, but had resumed while I was cooking dinner. Now being firmly in Grizzly territory, I didn’t want to cook food in or near my tent, so I spent the better part of an hour sitting a hundred or so feet away in another flat spot, cooking, eating, and getting rained on. While eating, I saw several people pass, including Cool Whip and Sprouts.

In my tent, I’m not expecting a very comfortable night. All the clothes I wore today are completely soaked. Changing into dry clothes helped, but just delays tomorrow morning’s uncomfortableness, when I put on cold wet clothes. Hopefully, the weather will improve, and I can make my distance goal.

This post contains links to amazon.com. As an Amazon Associate, I earn from qualifying purchases.
Continental Divide Trail, 2022
« (Day 92: Foothills of the Winds) Previous Entry
Next Entry (Day 94: From Dry to Soaked in 2.5 Seconds) »