I “slept in” this morning, waking up a little before 8. It was a dreary overcast, with a little bit of rain and clouds covering the nearby mountains. Gradually, over the course of the morning, the clouds lifted, but a firm deck of clouds remained for the rest of the day. 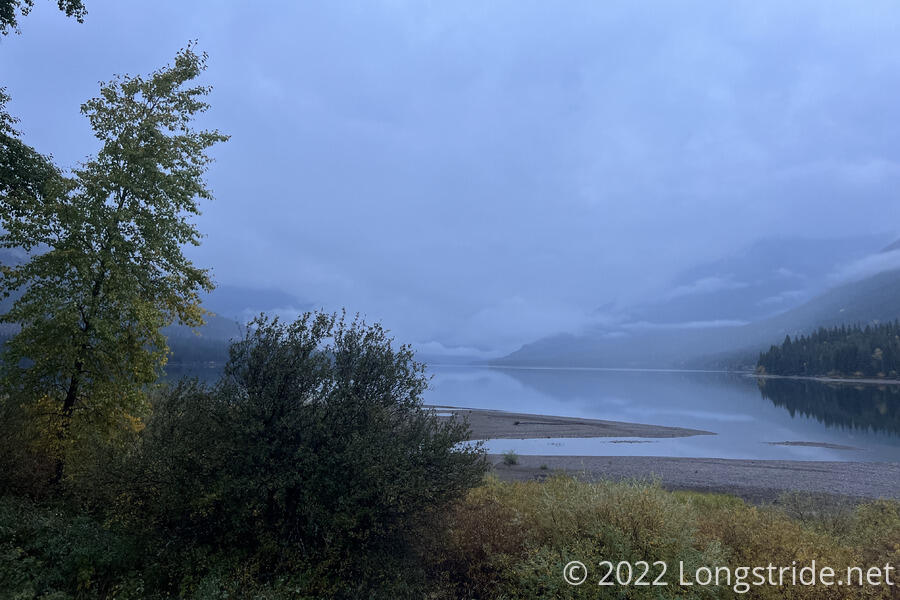 Waterton Lake on a Cloudy Morning 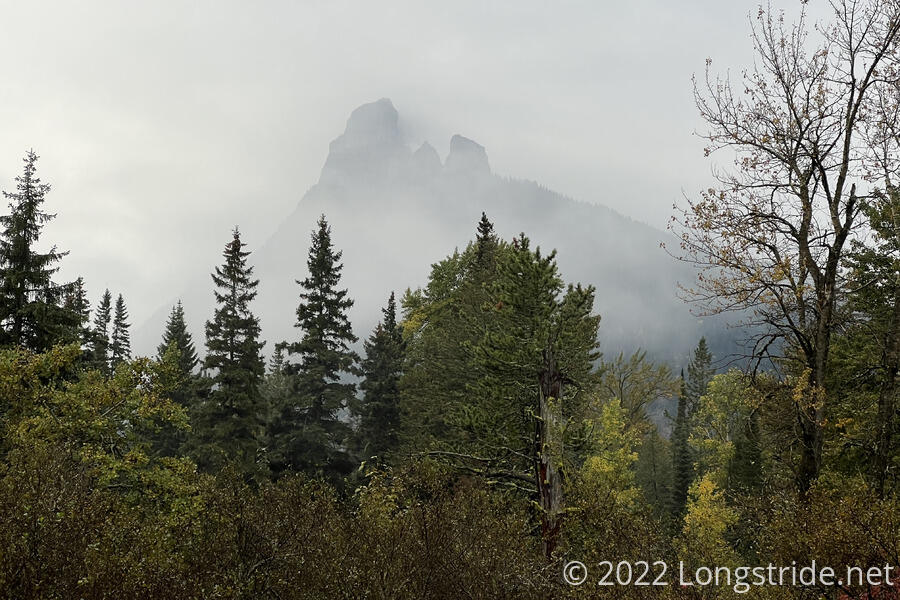 Citadel Peaks in the Clouds 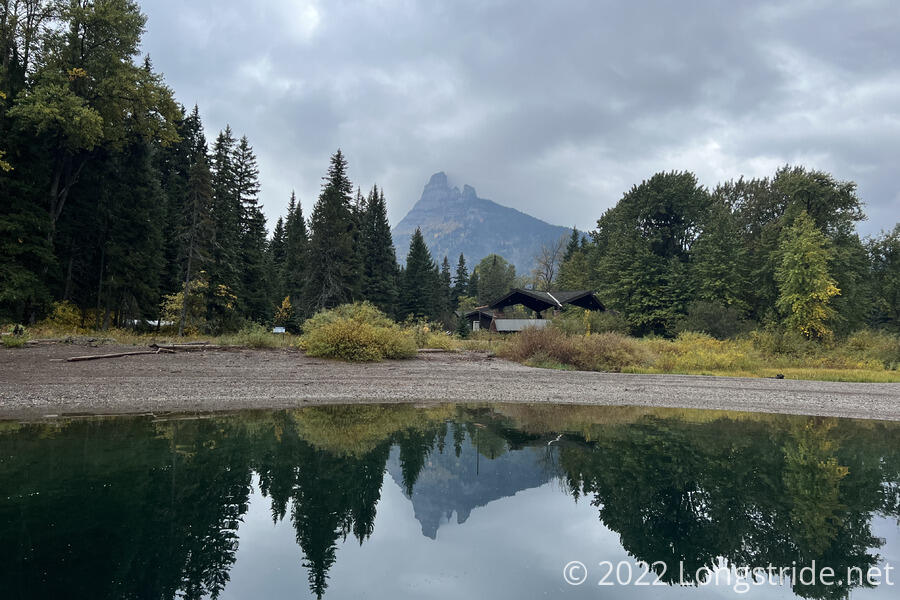 Citadel Peaks above Waterton Lake — The Goat Haunt pavilion and ranger station are visible just past the lake shore.

It was a very lazy morning. We decided to wait for Bass, Recon, Stumblebee, and Velveeta to arrive from the Fifty Mountain Campground, about ten miles south. But without any way to communicate with them, it was unclear when they would arrive at Goat Haunt (or if they’d even see us at all — it was possible, though unlikely, that with the layout of the complex, they’d miss us), so we just waited, and very gradually packed everything up, retrieving the last of our gear from the power room. The dry heat worked wonders on my boots, and where they were waterlogged yesterday, they were nearly bone-dry this morning.

We took the time to explore the area a bit. A short way down the beach was a second boat dock and a small outdoor museum dedicated to the Waterton-Glacier International Peace Park, established in 1932 due to efforts starting with early rangers from both Glacier National Park, and Waterton Lakes National Park, which adjoins Glacier in Canada. Among other displays, a poster shared the word “peace” in 58 languages. We were amused to find the word for peace in Norwegian and Swedish is “Fred”. There were also two buildings, essentially concrete pads with a roof and walls to cut them into quarters that could serve as hiker shelters. And a restroom had toilets and running water (though the mens room was out of toilet paper, which wasn’t surprising given everything is shutting down).

Recon and Velveeta were first to arrive, shortly before noon. Fuck-It and Wild Man, having grown increasingly antsy, left for the terminus shortly after. Stumblebee and Bass finally arrived shortly before 1, and the six of us finally left Goat Haunt about an hour later.

The hike to the terminus was short — only four miles — and largely uneventful. After crossing the wide and rushing Waterton River via a bridge we’d been concerned might have been removed already, the trail largely followed the western shore of the lake north, usually a bit inland, but occasionally coming close to a few small beaches. Occasionally it was a little overgrown, and wet, but waiting until afternoon to start hiking (and letting Wild Man and Fuck-It clear the water off the plaits first) helped. 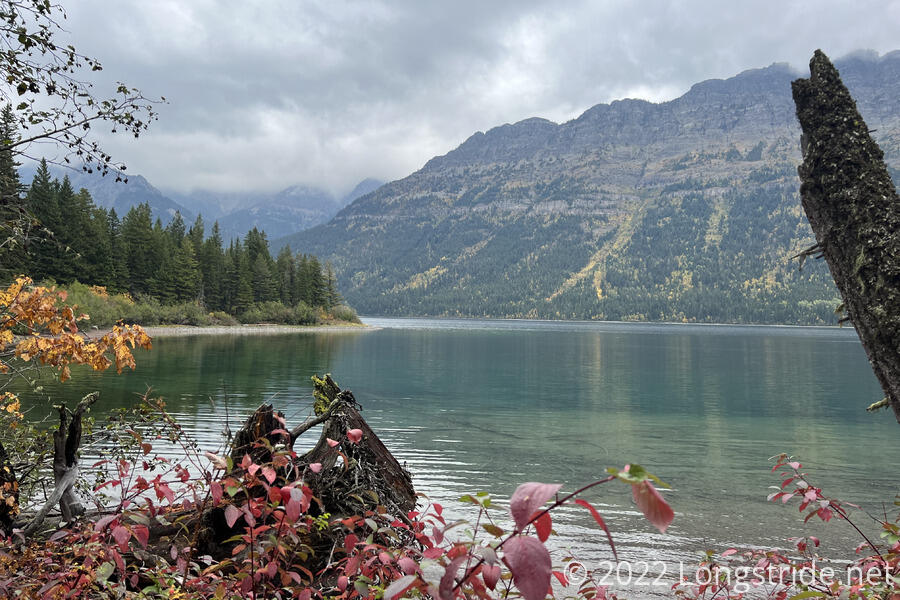 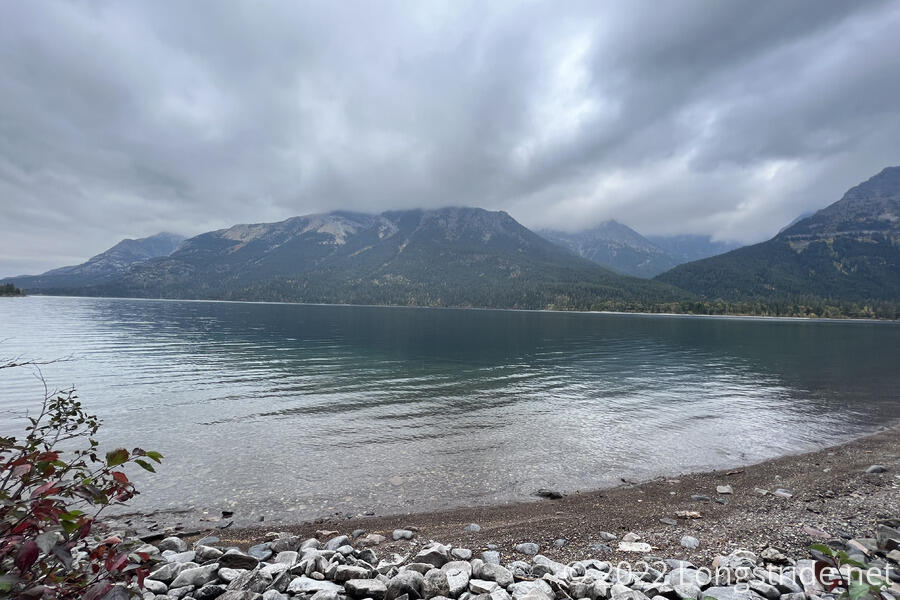 Just before the terminus, the trail crossed Boundary Creek, which cut a steep channel through rock, aided by a waterfall just upstream. 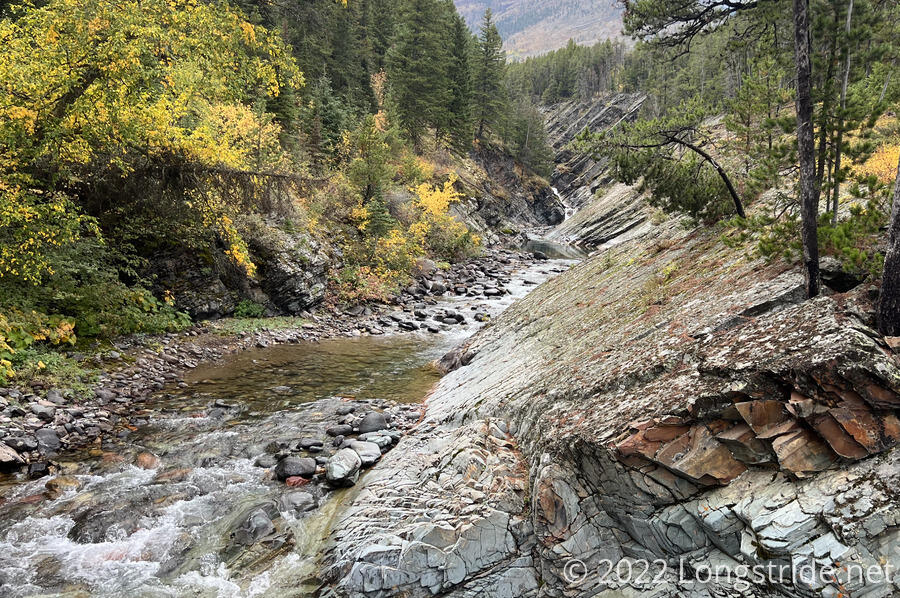 I reached the northern terminus of the CDT at 3:23 pm, just over five months after leaving from the Crazy Cook terminus in New Mexico. 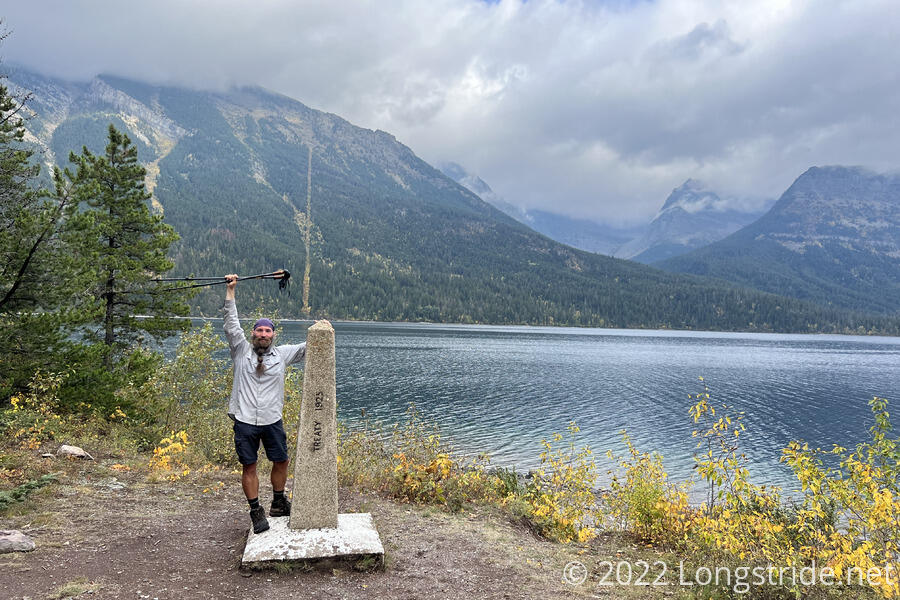 It was a bit of a bittersweet moment. I’d made it to Canada, but due to the fire closures in New Mexico, there’s still 250 miles of trail in New Mexico to finish to close the gap between Grants and Chama. I was done, and yet, not done. (I wished I could have gone back to do that section once it had reopened in June or July, but if I had, I’d still be two weeks away with the weather only getting colder.)

Still, I allowed myself to celebrate a little. Velveeta and I had now completed the Triple Crown of Hiking — the Appalachian, Pacific Crest, and Continental Divide Trails — and we both donned rainbow-colored crowns Sprouts made for us.

Gradually, everyone else arrived, and we hung out at the terminus for an hour. Eventually, though, it became time to leave. There was still another four and a half miles we needed to hike to get to Waterton Park, and we didn’t have any arrangements for staying over night yet.

We said goodbye to Bass, who did not have a passport, and thus, couldn’t enter Canada. He’s hiking back to where we started today, and then going on to the Chief Mountain alternate terminus over the next two days to head home to Las Vegas. Recon had also planned on hiking out that way as well, but decided today than an extra 30 miles of hiking was entirely unnecessary, and went into Canada with the rest of us.

The trail into Canada was fairly easy, and well-maintained, but it felt like we were on a clock. It remained overcast, and looked like rain was approaching from the south. Still, the trail in Canada was longer, and steeper, than the trail in Montana today, and went through a recent fire scar.

Atop a hill, I got one last look back towards Glacier, and a first look towards the town of Waterton Park.

One Last Look Towards Glacier… 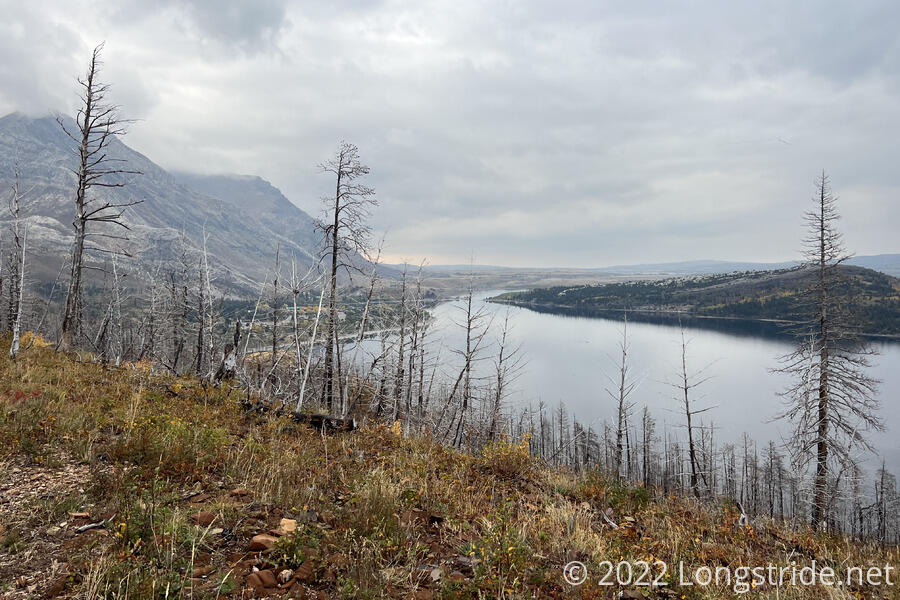 Despite being somewhat bittersweet about “finishing” at the terminus, the run down the mountain into Waterton Park did feel somewhat triumphant. (Wearing a silly hat may have helped.) I passed a fair number of day hikers walking up to or coming down from the viewpoint. Almost at the trailhead, I passed a younger couple heading up the mountain for a couple of days. I gave them my can of bear spray. I wouldn’t need it in New Mexico, and couldn’t take it with me even if I did. (I now expected I was probably going to be flying there, rather than driving, and I wouldn’t be able to take the can of bear spray on the plane.)

Having reached town, my first order of business was food. We’d had a hot dog place, Wieners of Waterton, highly recommended. I caught up with Fuck-It and Wild Man on the way there. Most of town was closing down as the season ends; they’d gone to the general store to find it practically empty.

After waiting a while for Sprouts, Stumblebee, and Velveta to show up (and then giving up waiting), we went to find lodging. We tried Aspen Village, but without the whole group being there, it was “too expensive”. We checked out the place next door, which was even more expensive. So Fuck-It and Wild Man went to the rather large campground on the outskirts of town near the trailhead.

I, however, wasn’t going to spend the night in a tent. Finishing the trail deserved a shower and a real bed. So I returned to Aspen Village and got a room, then let everyone else know I had, just in case someone wanted to split the cost. I was a little surprised when everyone showed up; apparently the self-registration at the campground was too confusing, and seven people stuffed into a room does make it a lot cheaper.