It’s a new year, which means, it’s time for a new hike! My latest hike with MAHG was on the northern part of Catoctin Mountain, in Cunningham Falls State Park and Catoctin Mountain Park, near Thurmont, MD.

Cacoctin roughly parallels South Mountain (about 7 miles to the west), the mountain the Appalachian Trail follows in its course through Maryland, making this the closest hike I’ve done to the AT in Maryland (besides the AT itself). 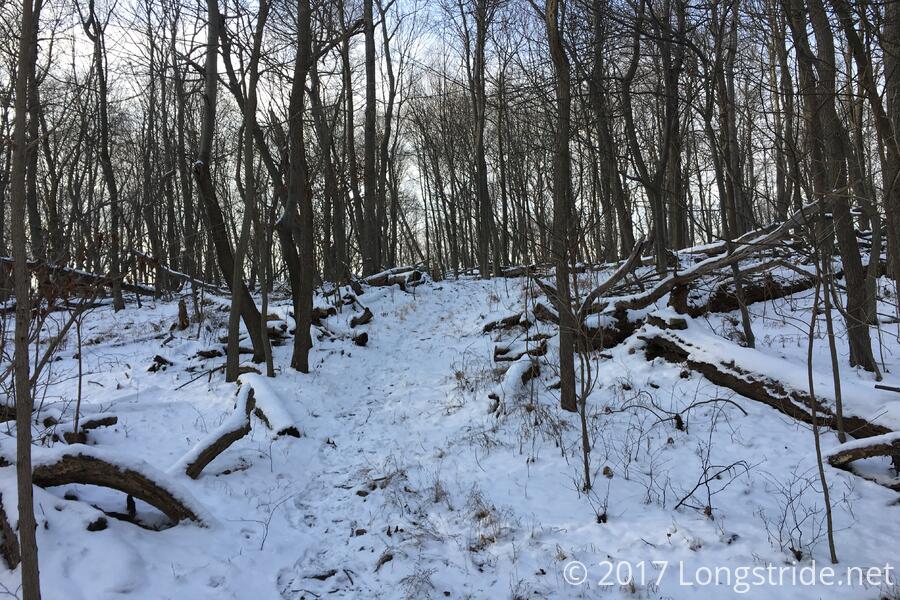 It was a cold day for a hike. The weather forecast claimed a high of 20°F, though weather data I looked at after the hike suggests the temperature ranged between 15° and 17° while twelve of us were out on the trail. There was little wind, though, and most of the trail was shielded by (leafless) trees, so while it was cold, it was not unbearably so, as long as we kept moving. I’d still have to give my coldest hike award to a bitterly cold, windy day in the Smokies, purely due to the wind.

The trails already covered from snow earlier in the week, a light flurry welcomed us to the mountain, as we starting climbing “Bobs Hill” via the Catoctin and Bobs Hill trail, starting from the Manor Area of Cunningham Falls State Park. A long, steady uphill, warmed us up in the sub-freezing temperatures, and we gained about 1200 feet in a mile and a half, stopping for a short break at an overlook of the north face of the mountain.

Now up on the mountain ridge, we continued following the Catoctin Trail to its intersection with the Cat Rock Trail, the day’s high point.

The Cat Rock trail brought us a gradual downhill, leading to the eponymous Cat Rock, a pile of boulders that (should one climb to the top) provided an overlook over the nearby terrain, through leafless trees. (In the summer, there’d be little view; it’d just be a sea of trees.)

After our break, we continued along the Cat Rock Trail, leading us down the mountain to a road along the northern border of the park.

For a substantial duration of our hike along the Cat Rock Trail, at least two miles, we followed a fresh trail of blood and hair, clearly left by a shot deer fleeing its hunter. (Not long before we reached the road, we passed the hunter, tracking his prey.)

Crossing the road, we entered the Catoctin Mountain Park, run by the National Park Service, and after a mile long trek along a trail that skirted the road, arrived at the park’s visitor center, about halfway our hike, where we stopped to warm up for a bit.

The visitor center has a nice display on the animals native to Catoctin, and the mountain’s history. A significant portion had previously been deforested to support local industry. Nearly all of it had been deforested at one point, and has since regrown due to conservation efforts (much like large portions of the land surrounding the Appalachian Trail).

Continuing on from the visitor center, we followed the Falls Nature Trail towards Cunningham Falls, which we approached by following a handicap access boardwalk trail, returning to Cunningham Falls State Park.

The boardwalk followed a stream leading from the falls, parts of which were frozen over, and stopped short of the falls, providing a nice vantage point. 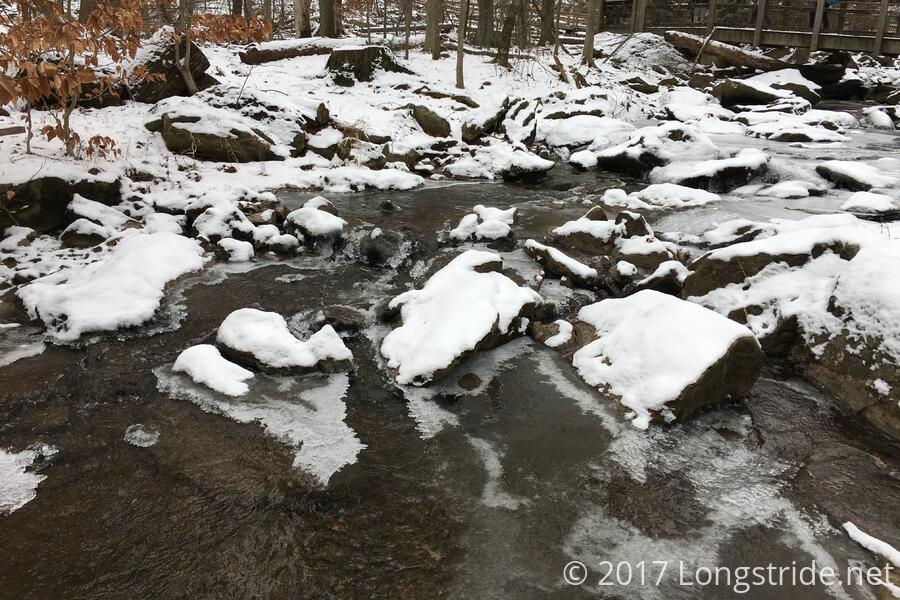 However, with no direct connection between the boardwalk and the further trails we needed to take to return back to our starting point, we had to climb over the fence at the end of the boardwalk and cross the frozen stream. This proved to be a bit more challenging than our hike leader had anticipated; the streams were swollen due to rain and snow earlier in the week. But, what’s a hike if it doesn’t include a little bit of adventure? 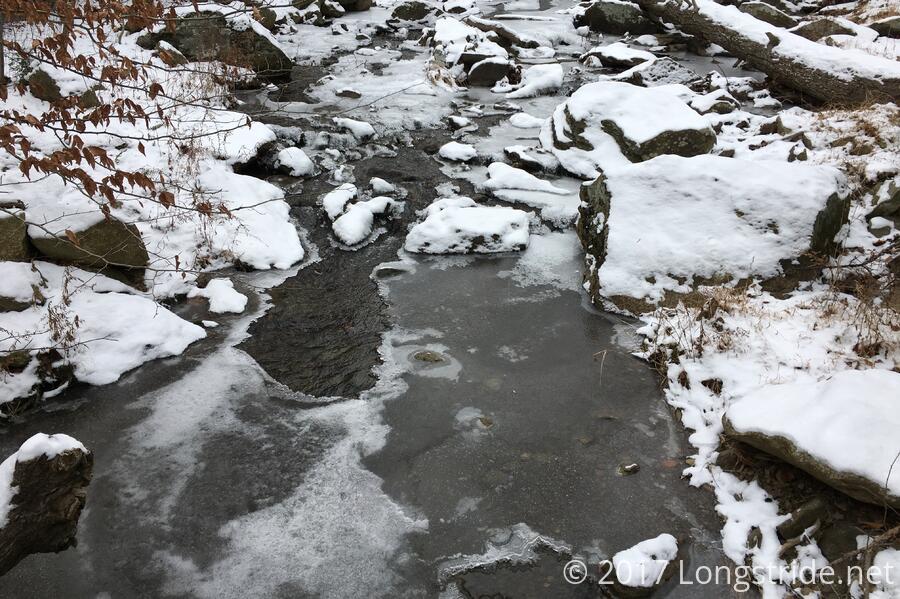 Eleven of us made it safely across without getting wet. The last, a national park ranger with a search-and-rescue dog, had to turn back, since it would not have been possible to safely get the dog across the stream. (He was able to get a ride back to his car from the national park visitor center we had just left.)

The falls itself was still flowing, though at each terrace, mounds of ice had built up, and the immediate basin the waterfall flowed into had iced over, save for where water was flowing into the pool. 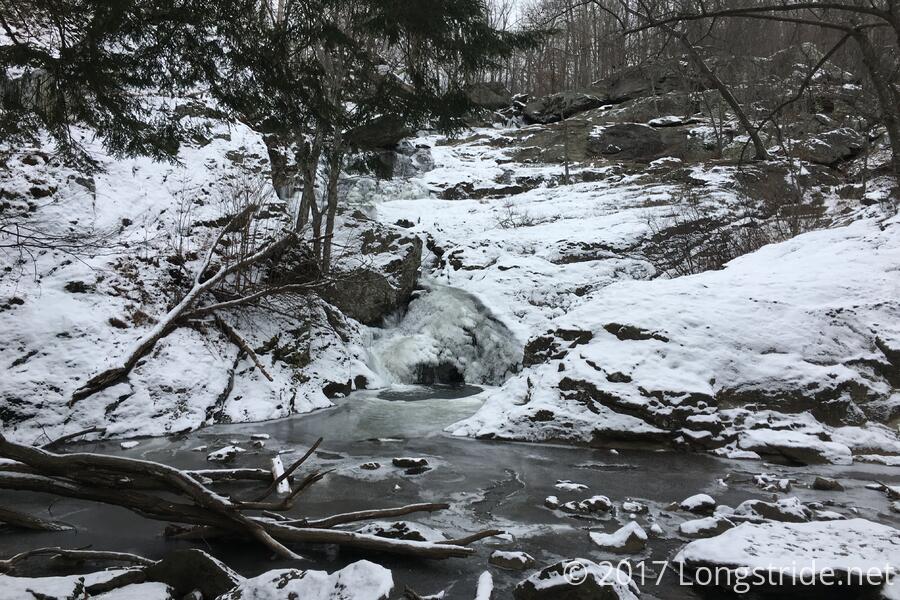 After a jaunt uphill along the Cliff Trail, we rejoined the Catoctin Trail, and began heading south, back towards our starting point. After passing a campground, we again found a trail of blood on the trail, and passed another hunter tracking his quarry.

Not surprisingly, my water tube froze up several times throughout the day. If I do more sub-freezing hikes, it’s something I’ll need to address. I managed to thaw it out enough to drink from by warming the tube up with my hand, but by mid-afternoon, this was no longer effective. I’d considered getting one of Camelbak’s insulated water tubes, though one hiker indicated they still had theirs freeze up. (Still, it’d probably be better than nothing.) Another hiker mentioned a battery-powered tube heater, so that may warrant some investigation.

After another uphill climb, we eventually returned to the day’s high point, the intersection with the Cat Rock Trail. From there, it was all downhill, retracing our steps back down the Catoctin Trail, back to the parking lot.

Colder, and nearing sunset, we passed on the opportunity to observe the south overlook to Bobs Hill, the warmth of our cars an enticing respite. I’m looking forward to returning in the spring or summer, possibly for a longer hike, just to see what this area looks like when it's not covered in snow.